When most Marvel readers nowadays talk about Marvel Cosmic, they tend to focus on the creative explosion starting with Annihilation in the mid-2000’s extending through the Thanos Imperative

There’s ample reason for this focus – the period generated several of my favorite Marvel Comics of the 2000’s, including Guardians of the Galaxy and Nova – but it should come as little surprise that Marvel’s Cosmic universe extends all the way back to Fantastic Four #2 in 1963!

Below you’ll find a mega Marvel Cosmic guide, from the origins of the Skrulls through more recent events like Infinity and the 2017 solo Thanos series

. I would highly recommend readers (new, lapsed, or long-time) use Marvel Unlimited for the older issues, especially if the stories aren’t collected in their old trades. I’ll link to where you can find copies of these comics below, but MU is the cheaper digital option for most.

If you have questions or feedback, do what feels right to you in the comments below, or let me hear about it @ComicBookHerald on Twitter. Otherwise, enjoy the comics!

The Origins of Marvel Cosmic

The coming of the Skrulls! Note that Fantastic Four #37 is available in later Masterworks volumes (or, of course, Marvel Unlimited) and shows the Fantastic Four actually visiting a planet of Skrulls.

Steve Ditko and Stan Lee with Dr. Strange in “The Search for Eternity!”

Jack Kirby and Stan Lee with “The Coming of Galactus.” These three issues (really two and a half) define so much of Marvel Comics to come, and introduce cosmic characters like Galactus and the Silver Surfer, along with the biggest Watcher appearance of all time! Then, in FF #57 to #60, it’s Doctor Doom vs. the Silver Surfer in one of my favorite Lee and Kirby productions.

Thor meets a Recorder and Ego the Living Planet!

Silver Surfer gets his own, relatively short lived solo series from Stan Lee and John Buscema. He is Shakespearean and mopey as heck.

A Hulk in Asgard

“In the Clutches of… The Collector!”

Stop me if you’ve heard this one before. Thor, Galactus and Ego the Living Planet walk into a bar…

Classic Guardians of the Galaxy

Classic Guardians of the Galaxy origin. Earth shall overcome!

Roy Thomas and Neal Adams with an all-time classic Avengers event: The Kree vs. Skrull war.

The Power of Adam Warlock

The original Adam Warlock comics before Jim Starlin made Warlock the “good” centerpience in his Marvel Cosmic epic.

The Jim Starlin 70’s Marvel Cosmic era takes off, and defines much of what’s to come. Iron Man #55 is the official first appearance of Thanos and Drax the Destroyer, and Captain Marvel reaches new heights, crossing over with the Avengers in a quest to stop Thanos with a cosmic cube.

So Thor, Firelord, and Galactus walk into Starlin’s…

Enter Thanos and the Phoenix Saga!

Starlin’s Warlock War and The Magus begin, concludes with Thanos vs. the Avengers!

Drax: Guardian of the Galaxy

The Death of Captain Marvel

Jim Starlin’s “The Death of Captain Marvel” is Marvel’s first original graphic novel from the 80’s and concludes the Captain Marvel saga Starlin began back in 1973.

The Annihilation Gambit, then “The Trial of Reed Ricards” in space!

I AM FROM… BEYOND!

The 1985 half-world Rocket origins by Bill Mantlo and Mike Mignola (creator of Hellboy!)

Avengers: Return of the Phoenix

Return of the Phoenix 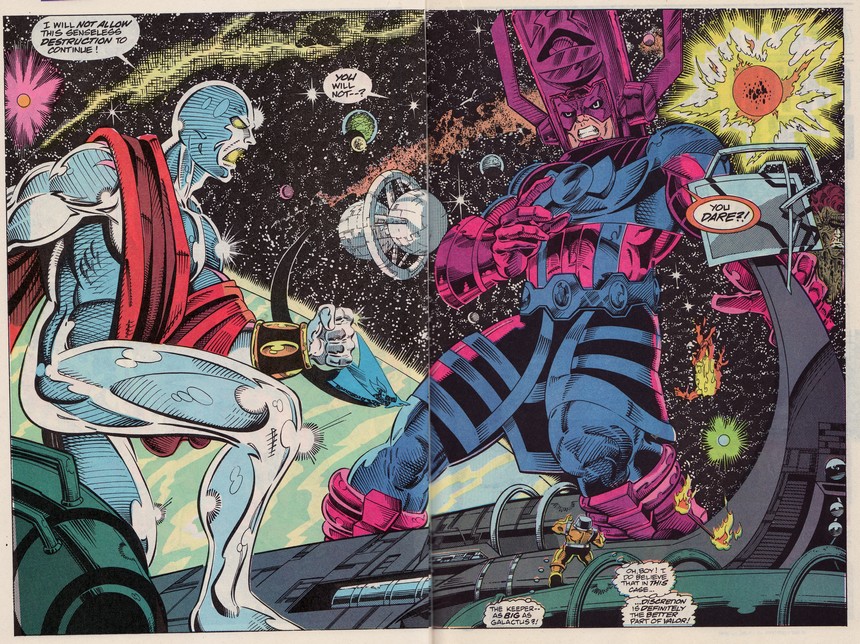 Rebirth of Thanos & 90’s Guardians of the Galaxy!

Stan Lee teams up with art legend Moebius for this elseworlds style battle between Silver Surfer and Galactus.

The legacy of Thanos!

Kross Time Kangs by Walt Simonson, with a healthy helping of Nebula.

Starlin’s back, baby! Quite likely my favorite Thanos comics ever.

Guardians of the Galaxy by Jim Valentino Omnibus

You can quite comfortably keep your reading to the core six event issues of Infinity Gauntlet, but if you want all the tie-ins (Silver Surfer and Dr. Strange particularly add to the narrative), I have an Infinity Gauntlet reading order here.

Again, if you want all the tie-ins for Infinity War, I’ve listed out a reading order on the Thanos comics guide page.

And the order is:

Warlock and the Infinity Watch #23

Warlock and the Infinity Warch #24

Warlock and the Infinity Watch #25 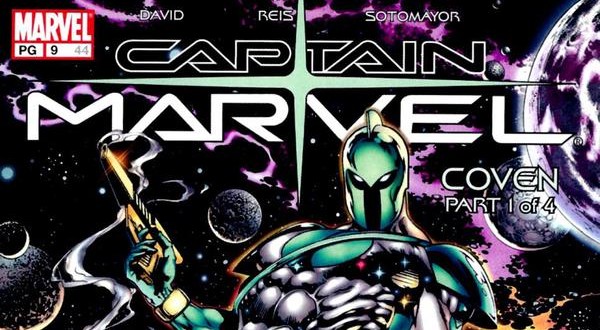 The mini X-crossover ultimately leads to the start of the 90’s Generation X.

Corsair and crew get their own space pirate miniseries (1995).

Peter David’s 2000 to 2004 era. I’ve written in detail how to navigate the series in trades and on Marvel Unlimited.

A veritable who’s who of cosmic cameos, including Moondragon, Quasar, Captain Marvel, the Watcher, and of course, Galactus.

Pegged as an Annihilation prelude by Marvel retroactive marketing, the Inhumans take to space and do help set the stage for some of the developments of the later War of Kings event.

Thanos vs. Thor and a story so unacceptable to my love for the Mad Titan that I wrote a headline implying it made me cry (bah! Tears are for the weak!). 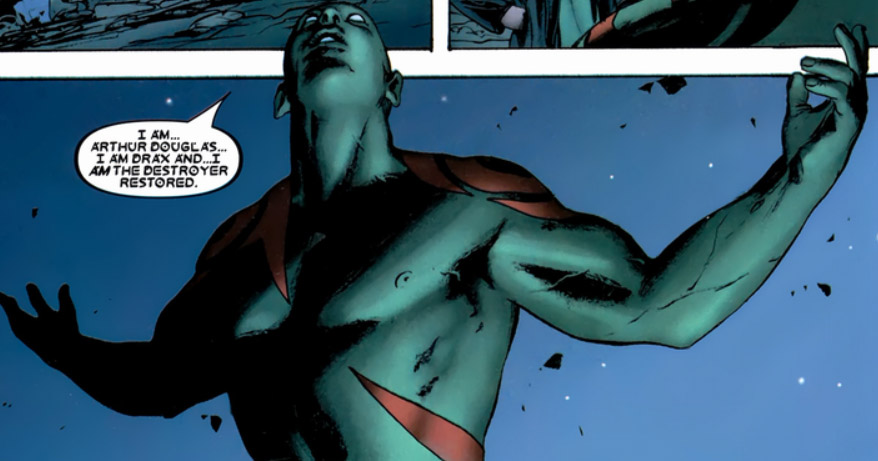 Jim Starlin’s 2000’s return to Thanos and Adam Warlock, and his savage retcon of basically any use of Thanos that he didn’t author.

Mark Waid and Mike Wieringo bring you that time Johnny Storm was a herald of Galactus.

Since the Infinity Gauntlet only wiped out half the Marvel Universe (half!), Starlin goes for it all with Thanos in “The End.”

Warlock by Pak and Adlard

What happens to the Phoenix force when Jean Grey isn’t around?

You’re going to want to read the Beta Ray Bill saga after the events of Thor: Disassembled

Miniseries redefining Drax the Destroyer for the 2000’s.

For the full guide to the 2004 to 2011 run of “modern” Marvel Cosmic, you can check out my original Comic Book Herald guide.

Otherwise, the general flow of events, with complete reading orders linked, is as follows:

Guardians of the Galaxy by Abnett & Lanning

to Skaar: Son of Hulk

& Rise and Fall of the Shi’ar Empire

Out of continuity, beautiful look at the Silver Surfer’s last days.

The Dan Abnett and Andy Lanning cosmic era officially concludes with their boss-level team-up between the likes of Silver Surfer, Ronan the Accuser, Beta Ray Bill, and Gladiator. 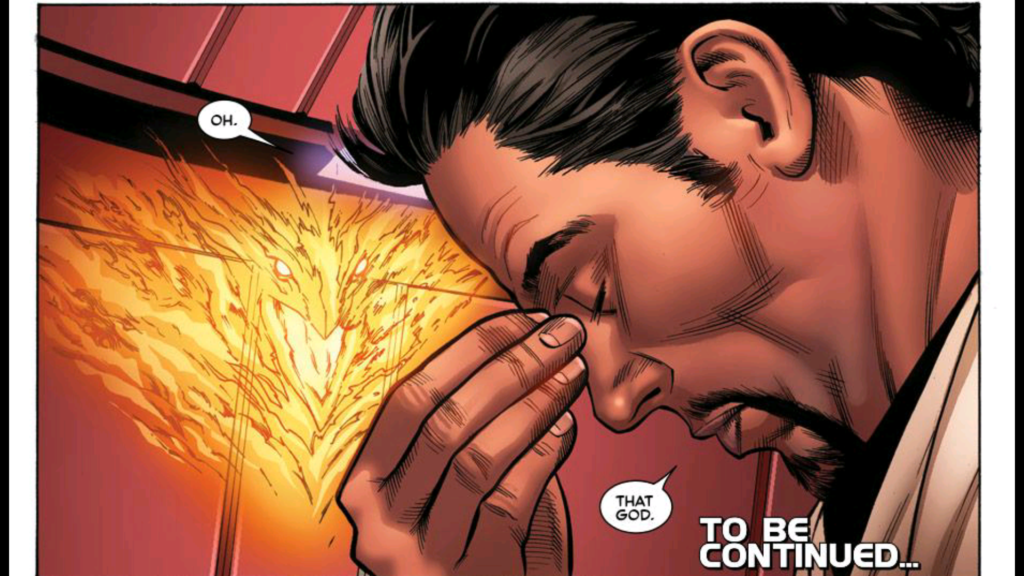 The Phoenix Force returns and splits the Avengers and X-Men into warring factions.

In my humble moderate opinion, the worst Thanos comic ever conceived.

Jeph Loeb launches an all-new Nova for Marvel NOW! in the distant wake of Thanos Imperative.

Jason Aaron and Esad Ribic’s Thor: GoT is one of my absolute favorite Marvel NOW! runs, and it invents new cosmic aspects of the Marvel Universe at nearly every turn. Highly recommended.

The Matt Fraction and Mark Bagley run is semi-underrated (albeit entirely inferior to the Fraction and Allred simultaneous FF) and mostly occurs in space.

While Age of Ultron is not necessarily a cosmic event, its timey-wimey narrative does lead to this epilogue series with the one and only world devourer, Galactus! 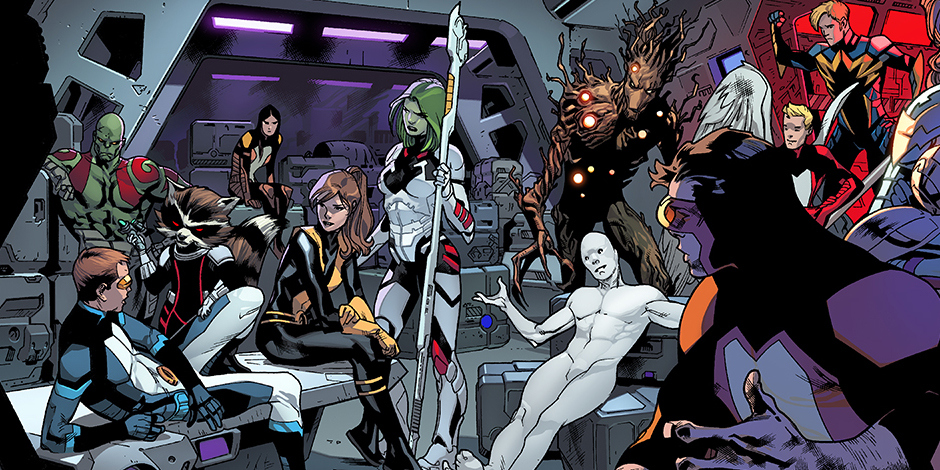 Hickman’s Infinity through Guardians / X-Men in The Black Vortex

God Emperor Jonathan Hickman takes on Starlin’s Thanos/Infinity mantle and somehow wields the power with sufficient control and skill. In all honesty, Infinity will really only make sense if you read the entire Hickman Avengers run to this point, and it’s quite cosmic (and awesome) in its own right.

Thanos: A God Up There

Issues: Thanos: A God Up There

Guardians of the Galaxy/All-New X-Men: The Trial of Jean Grey

The Trial of Jean Grey

Biggest developments for Uatu the Watcher since 1966.

Carol Danvers makes her way to space before joining up with the Guardians of the Galaxy.

Deadpool and Thanos throwdown (well mostly, Thanos throws Deadpool down) for the love of Lady Death. 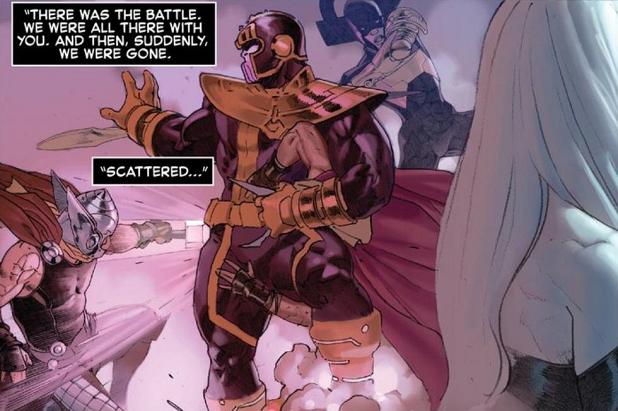 Time Runs Out! Here’s the Hickman reading order as I’ve laid out elsewhere:

Man, I love me some Secret Wars. I’ve listed out the most cosmic tie-ins below as well. 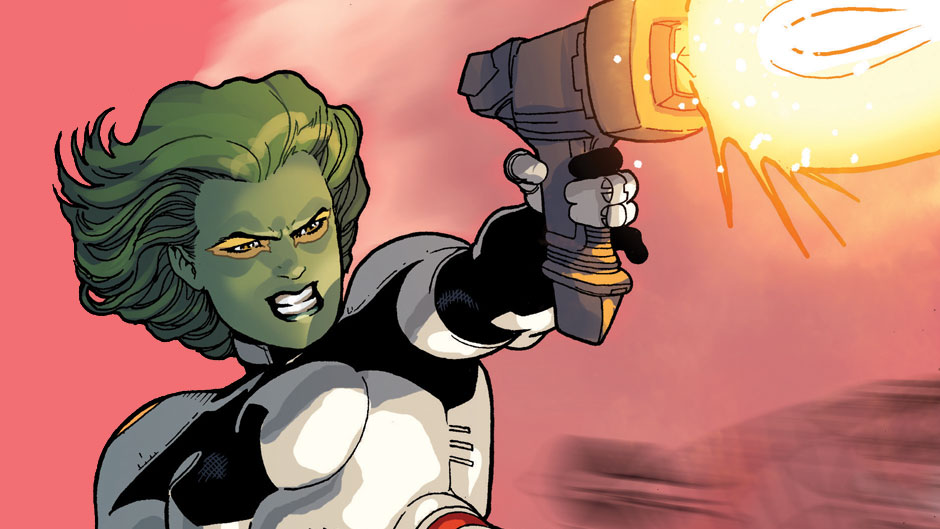 Ultimates is my favorite Marvel Comic of 2016, and one of the best Marvel cosmic books in years, even through Civil War 2 tie-ins!

The gang has a series of solo adventures while broken up and stranded on Earth only to reunite and fight Thanos in the end, concluding the Bendis era.

In this mini-series, the Odinson (along with Beta Ray Bill) quests for his worthiness out in the cosmos but encounters The Collector, The Black Order and more!

Jane Foster faces off against the Phoenix Force in an intergalactic challenge of the gods!

To Galactus, his Ultimates! Eternity’s jailer is finally revealed!

The concluding volume of Dan Slott and the Allred’s acclaimed run!

Post-IvX, the House of Boltagon and Marvel Boy take to the stars to search for the true origins of the Inhumans.

At the onset of their deep space voyage, the Inhumans decide to drop Maximus off at some super-secret space prison. Except he’s pulled the classic switcheroo and now Black Bolt is lost in space. Featuring the best Absorbing Man ever!

“The God Quarry” is such a metal phrase…

All-New Guardians Of The Galaxy Vol. 2: Riders In The Sky

Locked off from aid and reinforcements, CM and Alpha Flight plus guest stars face unending waves of Chitauri attackers in Earth’s orbit!

The Infinity Countdown gets a prologue here!

The Starlin modern graphic novels generally don’t fit that well in ongoing continuity but here’s about as good a place as any.

Death Of The Inhumans

Collects: Asgardians Of The Galaxy #1-5

Spinning out of events of Infinity Wars

The Life Of Captain Marvel

Black Order: The Warmasters Of Thanos

Asgardians of the Galaxy Vol. 2

Collects: Asgardians Of The Galaxy #6-10