Throughout the 2000’s the Fantastic Four have remained the rare Marvel property that isn’t properly beloved. Terrible movies will do that. I’m here to rectify that wrong with all the awesome Fantastic Four comics you’ll ever need.

The comic that started Marvel as we know it. Gotta read your Lee & Kirby if you ever want to call yourself a True Believer!

The final issues of the classic Stan and Jack era!

Stan’s around for a bit longer and there’s even one last Kirby story but say hello to new talent such as Archie Goodwin and John Buscema!

The F4 temporarily break up before Reed and Sue finally get back together! Plus Crystal and Quicksilver’s wedding crossover with the Avengers crashed by Ultron!

It’s the Roy and George Perez show featuring Rich Buckler and Big John! The return of King Kirby on covers! Luke Cage replaces The Thing because… reasons! Plus Galactus versus the High Evolutionary!

The Roy and George era concludes, giving way to a brief “It takes a village” period before landing on George and Len Wein and another near break-up of the F4! Also featuring the second half of 70s Kirby covers!

Marv Wolfman and Keith Pollard become the new regular team as Perez becomes the cover artist. The F4 reunite (again)… and just in time for their 200th issue celebration!

The collected issues referenced here are the ones you’ll find included in the Marvel Omnibus edition. You can certainly dig for these in Marvel Unlimited, but I’d just as soon keep to those within the Fantastic Four title.

John Byrne comes on board as regular artist with stories written by Wolfman and Bill Mantlo!

The acclaimed Moon Knight team of Doug Moench and Bill Seinkiewicz take the F4 into the 1980s! Plus more early John Byrne on the title!

Limited 1987 series from Chris Claremont. In the wake of the X-Men’s mutant massacre.

Steve Englehart and returning Keith Pollard are the regular creators and transform the F4 figuartively and litreally in mid-80s tales seeing a trek through the center of the Earth, the Beyonders, Cat People and a Grey “Joe Fixit” Hulk versus “Rocks to 11” Thing two-parter! Plus, horror master Bernie Wrightson!

Semi-retired family downtime in the suburbs isn’t in the cards for Reed and Sue as supernatural shenanigans has them join the Avengers for a hot second. Meanwhile, Ben and his F4 gang face villains like Graviton and Kang and stage a rescue for Mantis!

Coming out of the Acts of Vengeance event, Walt Simonson steps in as regular writer/artist (so, of course, Thor guest-stars- so, cool…). Also guest-starring Iron Man and more of that confusing Kross-Time Kang/ Nebula story from the Avengers. But also tremendous fun…

More fun and adventure up and down the timestream and into the multiverse!

Walt Simonson finishes his run collaborating with Art Adams while the incoming team of Tom DeFalco and Paul Ryan begin their tenure- starting with turning everything you thought you knew about Johnny Storm and Alicia Masters’ marriage upside down (pssst… it’s Skrulls)!

Mid-90s crossover featuring Namor, the Inhumans and that time Scott Lang was part of the 4!

The return of Reed… just in time for Onslaught!

The 4 survive Onslaught and relive their lives in a bubble universe reboot by Image-era Jim Lee and company!

The 4 return to mainstream reality and try to go back to business as usual- except it’s not that easy. Featuring stories by X-alumni Scott Lobdell, Alan Davis, Chris Claremont and Salvador Larocca!

As you’ll note, you could start all the way back with Fantastic Four #1 as part of Heroes Return. Personally, I don’t find this period of Marvel Comics very worthwhile, but completists will want to jump all the way back. Otherwise, I’d kick off with this intriguing Jeph Loeb run as a lead-in to Mark Waid and Mike Wieringo’s truly excellent arc.

This is a weird trade collection, and although I own it, it’s not one I highly recommend. Nonetheless there are some major Inhuman developments here. I won’t be doing a full Inhumans reading order within the FF, but I will note that you’ll want to read Paul Jenkins and Jae Lee’s Inhumans miniseries before these four Inhumans issues.

If you’re looking for the best modern starting place for Fantastic Four, look no further. Mark Waid and Mike Wieringo put together one of my favorite Fantastic Four runs ever, and it’s a highlight of early 2000’s Marvel. Note that the series adopts its original numbering after issue #70 for the all important issue #500.

I’m adding in here one of Marvel’s finest all ages creations, a series of Franklin Richards one-shots. Not necessary for continuity, but a lot of fun, and again, very well suited for all ages.

If after all the fun, laughs, and joy of the previous Fantastic Four stories you find yourself wanting to see Marvel’s first family dragged through hell, well, here’s Grant Morrison & Jae Lee with 1234! This is an out of continuity miniseries under the Marvel Knights imprint, meaning it’s much darker and edgier than the reading thus far. It’s also some of Morrison at his madcap best, devising insidious torture for the Fantastic Four.

Robert Kirkman gets into the heads of the Fantastic Four’s villains.

I’d rate House of M: Fantastic Four as one of the best House of M tie-ins out there.

Tales of the Thing

A personal favorite detailing the rise of Victor Von Doom. From Ed Brubaker, writer of Captain America: Winter Soldier and Joker: The Man Who Laughs (or Criminal, Velvet, Fatale… he writes a lot of good comics).

The Thing: Idol of Millions

I’m of the opinion that you can basically jump past this portion of the Fantastic Four to the Civil War tie-ins, but do you!

Look back at the very first moments of the Fantastic Four’s superpowered transformation.

Naturally, if you want to see how these issues fit in with the rest of the event, you can check out the Civil War reading order guide.

Out of continuity look at the final Fantastic Four story!

Dwayne McDuffie takes over Fantastic Four duties following the team shake up of Civil War. Lots more Black Panther and Storm in these issues, which are quietly very solid.

Fantastic Four: The Beginning of the End

Collected edition includes earlier McDuffie work on issues #525 and #526, but obviously you can just keep on rolling with Fantastic Four #551

Strangely, Mark Millar and Bryan Hitch – the duo behind the Ultimates – didn’t do much to launch the Fantastic Four to new heights. Don’t worry, we’re nearly in Hickman range.

And of course, check out here for the rest of the Secret Invasion reading order.

Fantastic Four: The Masters of Doom

Doctor Doom and the Masters of Evil

This mini event is not a part of the Hickman saga, so buyer beware.

The series reloads to just “FF” after the “Three” story arc. Issues #1 through #11 of FF will count as Fantastic Four #589 through #599. Don’t freak out when those are “missing” in Marvel Unlimited!

You can also read the Fear Itself: FF one-shot here.

I highly enjoyed Matt Fraction and Mike Allred’s work on FF, and I actually think the Fraction and Bagley Fantastic Four is semi underrated. I’m not saying it’s the best work on the team, but semi kinda underrated.

VIII) The End of Fantastic Four

Hard to describe how much I dislike these Original Sin tie-ins. Ugh.

Fantastic Four Volume 3: Back in Blue

Secret Wars is effectively a Fantastic Four event, and marks the end of Hickman’s story arc on the Fantastic Four. Highly recommended for fans of the run.

Less expectedly, the Thing shoots back in to space, as Benjamin J. Grimm becomes the latest Earthling to join the Guardians of the Galaxy.

Although it’s my favorite Marvel Comic of 2016, Ultimates doesn’t have a particularly direct FF connection for most of its run. Nonetheless, it’s where we get the clearest glimpse into what the Richards family is doing after Secret Wars.

In addition to hooking up with Medusa, the Human Torch also joins Old Man Steve Rogers’ Avengers Unity Squad alongside Rogue (whom he also had a relationship with at some point??)

The Thing and the Guardians stage a breakout on a Badoon prison planet!

The Torch and the Unity Squad get caught up in S.H.I.E.L.D. prison town gone wrong!

When Johnny and Medusa’s relationship goes public, Crystal is not happy!

Uncanny Avengers: Unity Vol. 2: The Man Who Fell To Earth

A closer look at Ben and the Guardians during the hero versus hero turmoil! 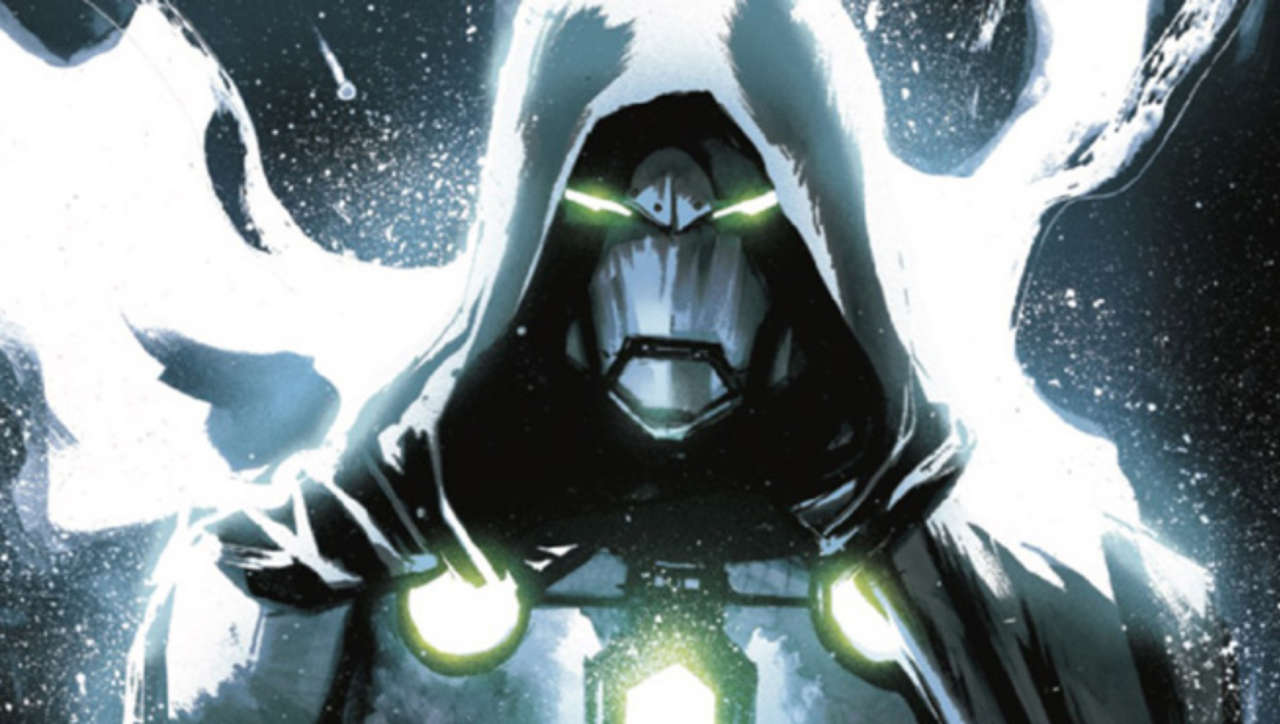 Johnny and the Unity Squad are still on HydraCap’s disavowed list when the long-standing plotline of the Red Skull possessing deceased Professor X’s brain finally comes to a close!

Peter Parker: The Spectacular Spider-Man Vol. 1: Into The Twilight

Reinstated after Secret Empire, the Unity Squad tie up some loose ends!

The Thing hopefully sends out the Fantasti-flare as Valeria Richards narrates the whole special from somewhere out deep in the multiverse. The first glimpses that the family may be returning soon…

Ben, Johnny and Doom as the Infamous Iron Man go venturing into the Multiverse looking for the Richards family!

Marvel Two-In-One Vol. 2: Next Of Kin

Part 2 of the multiversal search and the fateful reunion!

Johnny has one last Avengers adventure!

Johnny continues to guest-star on through to the 300th issue special!

Doom tries to merge Galactus into a mountain and steal his resources for Latveria! Like 10 seconds after the Thing’s wedding!

War Of The Realms

The 4 help defend Manhattan from Malekith’s invading forces during Marvel’s 2019 event, War of the Realms!