Chris Claremont turned a failing comic about mutants into one of the most successful comic book franchises of all time.  Though, often criticized for being too wordy or having wooden dialogue, Claremont helped create a more literary medium bringing comics into the modern era.  Claremont wrote X-men comics for 16 years!  Those 16 years form one of the greatest epics ever created.  All modern X-men comics use Claremont’s run as a foundation.  You won’t be able to truly understand X-Men: Messiah Complex without reading these books first.  The good news is a lot of these comics hold up pretty well.  In this guide I’ll try to differentiate the *required reading* from the *just for fun*.

I) The Phoenix and Dark Phoenix Saga

II) Days of Future Past through the Brood Saga

V) Fall of the Mutants

Before Claremont: Claremont took over in August of 1975 with Uncanny X-men (UXM) No. 94.  Before jumping right into that issue you should read some origin stories….

Recaps some of the early Lee/Kirby issues. Read this for a fun look back at the original Uncanny X-men issues.

Not required reading, but lots of fun.  Just fun adventures before the world of mutants gets super serious.  I just linked to the first volume, but there’s more on Amazon.

Magneto: Testament: Not required reading, but great insight into the super-villain as a young man.  Not much of a super-hero book, more of a World War 2 holocaust survivor’s diary.

: The one that started it all!  You must read this.  Out with the old X-Men & in with the new.  Claremont did not write this, but Claremont’s epic really starts with this issue.

16 Years of Claremont: And so the epic begins….

The relevant series include…

Uncanny X-Men (UXM): The X-Men flagship titile.  Claremont writes all of these.  Every issue is a must read.

The New Mutants (NM): Claremont wrote issues 1-54.  These are all must reads.  Louise Simonson takes over with issue 55.  At that point I would stick to the issue involved in the cross-over events.

X-Factor (XF). Louise Simonson starts this one and continues the writing chores for the first 69 issues.  Not my favorite until the great Peter David takes over with issue 70.  Extremely relevant to X-Men continuity, though.  The first appearance of Apocalypse is here and much more I won’t reveal to avoid spoilers.

Excalibur: Claremont wrote the first 34 issues.  With art from the great Alan Davis!

Relevant podcasts: Check out My Marvelous Year! We cover all the essential X-Men comics (and the Marvel Universe at large!) throughout Marvel history.

I. The Phoenix / Dark Phoenix Saga

Before the Phoenix Saga: UXM 94-100:  If you can find them, the way to read these is to find Classic X-Men #’s 1-44.  These re-print Giant-Size X-Men #1 through UXM #138.  The first 44 issues of Classic X-Men contain an extra 12 page story by Claremont.  These stories are great!  They are often more personal stories then you get in the main comic and help to fill in character details.  They are also written by a much more seasoned writer (an older Claremont).  I can’t recommend these enough.  Alternatively you can buy the Essential X-Men volumes.  These are the most affordable options typically, in black and white, and don’t contain the 12 page vignettes.  The first volume collects Giant-Size X-Men #1 and UXM 94-119.

The Phoenix Saga: UXM 101-108. This is the first part of a two part epic.  This may actually be the greatest story arc in super-hero comics.  Certainly one of the best.  John Byrne joins the team with issue 108.

Days of Future Past.  UXM 141 and 142.  Fan favorite.  One of my favorites.  They really don’t make comics like this anymore.

Avenger’s Annual 10.  Rogues first appearance.  This is a must-read.  You will never understand Rogue if you don’t read this.  Seriously.

Magik limited series.  Another favorite.  The Inferno cross-over event really begins here.  Even modern continuity owes a lot to this series.  Find out why Illyana Rasputin (AKA Magik) is so weird.

Marvel Graphic Novel 4: The New Mutants.  The beginning of a legend.

Marvel Graphic Novel 5: God Loves Man kills.  Technically this story occurs between UXM 167 and 168.  A fan favorite.  Read this for a better understanding of the Messiah War cross-over event.

NM 1-7.  Ya baby!  The first UXM spin off.  Jim Shooter commanded it, Claremont wrote it.  You should read these also.  Starts kind of slow, but by issue 18 (when Bill Sienkiewicz takes over art chores) become legendary.    The early cross-overs include these guys so you should get to know them.  Many of the NMs stay very relevant to modern continuity, especially Cannonball.

Wolverine limited series.  Chris Claremont and Frank Miller!  Reads like classic Frank Miller, though Claremont is credited for the script.  You really should read this.

The Demon Bear Saga.  NM 18-20.  Another classic arc.  Who knew Claremont and Sienkiewicz could work so well together.  Issue 18 features the arrival of

Rachel Summers from the future.  Yes, that was her in Days of Future Past.  Very important to 90s continuity, if you like that sort of thing.

Nightcrawler limited series (1985).  Dave Cockrum returns to write and draw this limited series.  Mostly just for fun; not a must-read.

Secret Wars II.  Not my cup of tea.  Hard to understand the main NM continuity without reading this, *sigh*.

Longshot limited series.  Longshot was created by Ann Nocenti and Art Adams.  Not my favorite character.  Is he supposed to be Ziggy Stardust?  Anyway, the art is great.  He joins the X-Men for awhile.  This series is actually pretty important to X-Men continuity.

XF 1-8.  The original X-men are back!  Involves no time-travel, but just a dash of ret-con.  Claremont didn’t write these, though XF is involved heavily in X-men cross-over events.

– You could plausibly place these relatively inconsequential cross-team capers after Uncanny X-Men #219.

NM 55-58.  Marvel has only collected up NM 54 in the Classic New Mutants volumes 1-7.  You can buy the individual issues on Amazon.  Not sure if these are included in Marvel Unlimited.

V. Fall of The Mutants

Wolverine V. 2 1-10:  The first ten issues of this series are by Claremont.  This is the first ongoing series featuring Wolverine.  Just to make things confusing this is referred to as v. 2, as v. 1 is considered to be the great mini-series by Claremont and Miller.

The above are all Evolutionary War

tie-ins, a non essential event for the X-Men.

Check out the full CBH guide to Inferno right here!

Wolverine #17 to #23 (includes Acts of Vengeance tie-ins below), Wolverine: The Jungle Adventure

Acts Of Vengeance: The X-Men

Uncanny X-Men #259 – #269: The quality starts to drop a bit, but Jim Lee (that’s right, now co-publisher at DC Comics) steps in with UXM 268 and the quality shoots right up.  These are some of my favorite X-men.  I wish we could of had more from Claremont/Lee. *Sigh.*  268 is a great blast from the past issue starring Captain America, Black Widow and Wolverine in a World War II adventure.

: End of the title (for now), and the debut of Deadpool.

X-Men 1-3 (Claremont and Lee):  According to Wikipedia this is (as of this writing) the greatest selling comic of all time, with pre-orders at 8.1 million copies.

X-Force #1 to #15: All new series launch with Rob Liefeld and Fabian Nicieza at the helm. 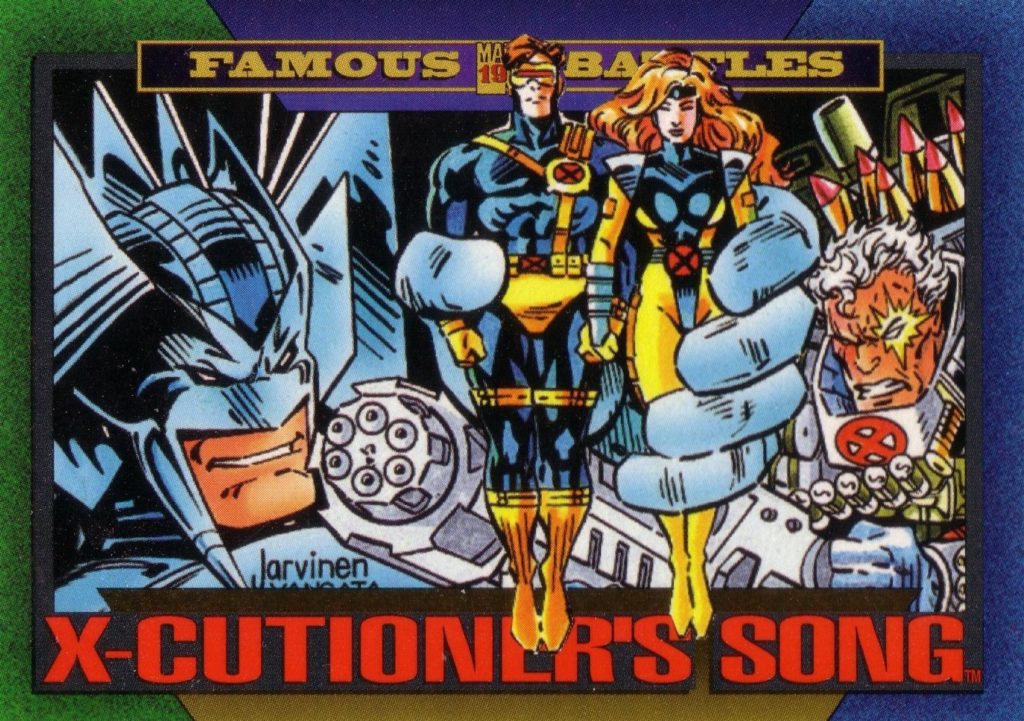 We’re now officially in the post-Claremont era of the 1990’s. The guide will focus on recommended reads and events from here on out!