A decade after Mark Millar and Steve McNiven’s Civil War became the biggest Marvel event of the 2000’s, Marvel’s throwing hero against hero again for Civil War 2. Please note that all of the trade and comics reading orders below have been updated weekly, as new comics were released! 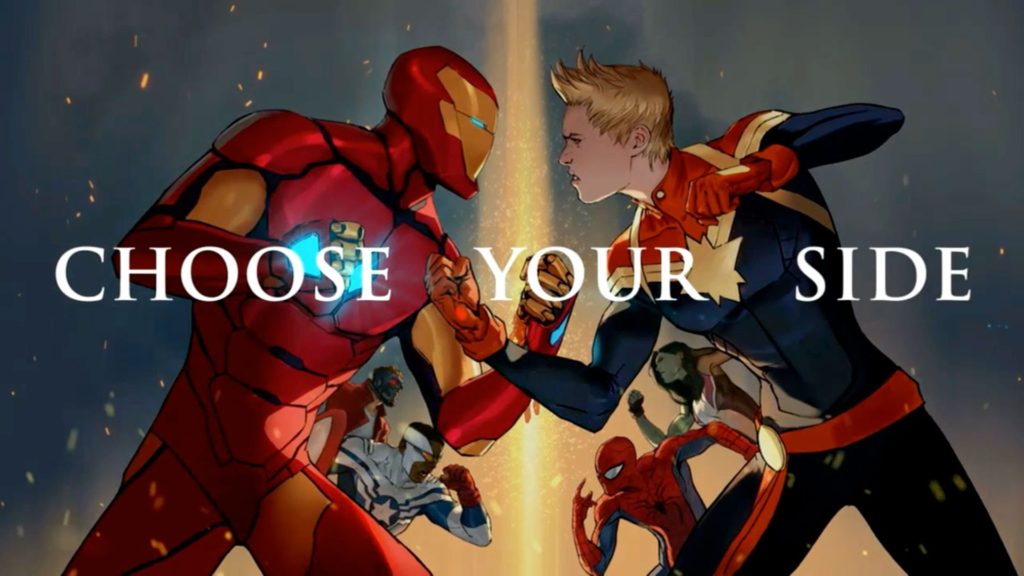 Dave’s Note: For those following along in real-time, new comics will be added in bold, italicized font (like so) the week of their release. Same goes for any changes made that week.

If you want to really be caught up, I recommend 1) Secret Wars and 2) Invincible Iron Man: Reboot

, which collects the first 5 issues of the run and explains all the Doctor Doom elements you’ll see in the Invincible Iron Man issues. Civil War #0 also very casually references outcomes from Infinity and Inhumanity, so now would be a very reasonable time to check out more Marvel NOW! comics.

This reading order will continue to be updated as new comics are released, and as I read them to determine placement.

The Road to Civil War 2

It is highly recommended you read the first 6 issues of Ultimates prior to Ultimates #7. For starters, it’s one of Marvel’s best cosmic superteams in years, and Al Ewing and Kenneth Rocafort are crafting one of the absolute best post-Secret Wars comics. Perhaps more importantly for Civil War II, issue #7 isn’t going to make much sense without the background of Carol’s vision. You can grab the first collection of Ultimates #1 to #6.

This is just a simple preview for the tie-ins that will be taking place during Civil War. It’s a free previews magazine, and not essential reading for the story.

“All buckets are essentially the same bucket.” Infinite series from Al Ewing continues to excel.

Great issue as usual from the Ms. Marvel team. If you’ve never read Ms. Marvel, this is as good a time as any to check out one of Marvel’s best new character creations of the 2010’s

Technically, you could stop Civil War II #1 at the 3/4 mark noted above, read Gods of War #1 and New Avengers #12, then read FCBD Civil War II, and then finish Civil War II #1. But that’s a lot of continuity work for not a lot of payoff, so I recommend you just read them after, aware that the majority of each issue occurs during Civil War II #1!

Don’t bother with Deadpool #16 if you want comics actually tied in to Civil War II.

Don’t bother with Deadpool #17 if you want comics actually tied in to Civil War II.

Important tie-in explaining the state of the Hulk if you haven’t been reading The Totally Awesome Hulk.

The Seeds of War

Very strong first issue! Wilson Fisk is back in town.

Goodness H. Gracious the “Civil War II” title on this is misleading. Just a Hercules story from Dan Abnett and co.!

You absolutely do not need this comic. I haven’t felt buyer’s remorse like this since I picked up Weezer’s “Make Believe” at Best Buy the day it came out.

Very loosely tied to Civil War II, and will not make very much sense if you haven’t been following All-New All-Different Squadron Supreme from the beginning!

Ultimates #10 and #11 actually take place during Civil War II #4, in between panels starting on page 12. Your best bet is to simply read them together after Civil War II #4. Also, if it can’t be Jim Starlin every time, I’d like to nominate Kenneth Rocafort for all-time Thanos artist.

As observed by Troy in the comments below, Hulk #9 likely occurs during Civil War II #4, as opposed to strictly after the issue’s conclusion. I’d still read here in one larger chunk.

2099 falls under the “barely a tie-in” category, unfortunately.

This is your friendly reminder that Deadpool has Bodiddly to do with Civil War II.

Guardians of the Galaxy #12

Guardians of the Galaxy #13

At the time of release (10.5), we really can’t say how far in advance the final issue in Bendis and Deodato’s Invincible Iron Man is meant to foreshadow. The cliffhanger ending is well executed enough, though, that you can plausibly read the issue here, essentially as it was published, and just know that something big is coming.

This arc of Nick Spencer’s Steve Rogers will be included in Marvel NOW 2.0, but this issue in particular is a directly connected epilogue with Civil War II: The Oath.