I love Jim Starlin cosmic comics, although I’ll admit more often than not I think of Thanos and the dark side of Marvel cosmic. If you’re going to enjoy Starlin’s 70’s, 90’s and 2000’s space opera, though, inevitably that means an affection and respect for the cosmic embodiment of good to Thanos’ evil: Adam Warlock.

Warlock (not to be confused with the later New Mutants alien, Warlock) is heady 70’s philosophy and expanding consciousness come to life on the page. Within his first years Warlock comics deliver a clear Jesus allegory and have him tackle organized religion and the nature of the soul. Conceptually, Adam Warlock wants it all.

Below you’ll find a proper reading order for Adam Warlock comics, including his Jim Starlin stories, as well as the comics that come before and after.

In one of the absolute weirdest Marvel historical oddities, Adam Warlock technically debuts in the pages of the Fantastic Four as the entitty “Him.” No really: “Him.” Jack and Stan’s “The Coming of Galactus” this ain’t,” but for true Adam Warlock heads it all begins here. Honestly, “Him,” doesn’t represent the shape Adam Warlock would take really at all, so you could easily skip ahead.

Although most frequently tied to Marvel Cosmic new god Jim Starlin, Warlock’s official 1972 debut comes from the pen of Marvel’s Roy Thomas. If you’re most intested in the Starlin era and Warlock’s connection to Thanos, you could skip these issues, although they will be referenced repeatedly in the coming stories.

This is where the most well known Adam Warlock elements begin, with Jim Starlin introducin Pip the Troll, Gamora, the Magus, and the very special connection between Adam Warlock and Thanos. Some of the best 70’s Marvel Cosmic comics this side of Captain Marvel.

The 1990’s return of Thanos in Infinity Gauntlet is one of my favorite Marvel events, and in many ways it’s Adam Warlock’s strongest showing. Warlock unites the Marvel Universe in a way no other hero can, and comes away with all-new purpose in Warlock and the Infinity Watch.

Adam Warlock forms the Infinity Watch, comprising a core unit of Drax the Destroyer, Gamora, Pip the Troll, Moondragon, and of course a mysterious sixth person.

Infinity War somehow gets even more Warlock heavy featuring Warlock’s evil alter-ego The Magus as the main Marvel Universe villain. Infinity War gets overshadowed by the admittedly superior Gauntlet, but is still well worth your time.

If the Magus is the manifestation of Adam Warlock’s “evil,” what does his “good” side look like? That’s the question asked by Infinity Crusade, the conclusion to Starlin’s 90’s Infinity trilogy.

Note that all twenty-two issues of Infinity Watch are included in various Infinity Gauntlt through Infinity Crusade trades listed above. Nonetheless, if you want the pure Watch, you can start here. 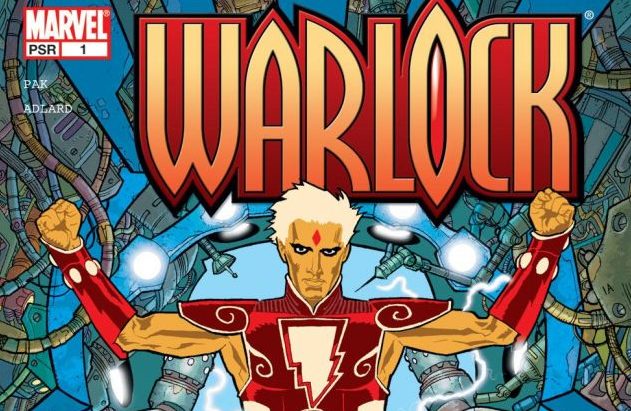 2000’s Return of Thanos and Warlock

The next three stories consist of Starlin’s 2000’s return to Thanos, and as you might expect, concentrate more directly on ol’ purple puss. Nonetheless, Warlock cameos throughout.

The rarest of birds in the Marvel Universe to date: An Adam Warlock series from a writer other than Jim Starlin!

Annihilation to the New Infinity Saga

Honestly, if you’re going to read these Annihilation Conquest tie-ins, I highly recommend you read the full Comic Book Herald guide to Marvel Cosmic. Annihilation through The Thanos Imperative include varying degrees of Adam Warlock, as the character becomes more and more essential through the excellent 2000’s cosmic narrative.

The fast track approach through Adam Warlock’s Marvel Cosmic appearances would be to simply read the Dan Abnett and Andy Lanning run through Guardians of the Galaxy, concluding with Thanos Imperative.

Although Starlin’s mid-2000’s return to Thanos graphic novels is titled as a Mad Titan feature, Adam Warlock is as central to these stories as he was to the 90’s Infinity trilogy. Must reads for Warlock fans who may have missed the first time around.

While It’s My Least Favorite Of The Jim Starlin Thanos And Warlock Graphic Novels, Infinity Entity Results In The Greatest Major Developments For Adam Warlock’S Place In The Marvel Universe.