You are here: Home / Featured / Herald Guided Review: Is Thanos Rising the Worst Thanos Comic of All Time?

This may seem over-dramatic, but Marvel Now! has a serious, festering, irredeemable dud on their hands with the first two issues of Thanos Rising.

Is this series the worst Thanos comic the universe has known? I haven’t read every Thanos story ever told, but I’m leaning towards a resounding YES.

For those who don’t know Thanos, he’s a perpetual top 3 all-time Marvel villain, ranking somewhere in the vicinity of Dr. Doom and Magneto depending on your preference and mood and feelings about Loki.

As I wrote in my complete Thanos reading order, he’s like the Dr. Doom of space, but even smarter, more powerful, and with better gloves.

Given this, it’s been nothing but exciting to see Thanos promised as a major player at the end of The Avengers, and to see Marvel gearing their own comics towards a Thanos-driven Infinity event later this year. 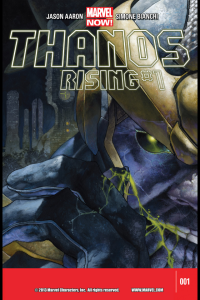 The year of Thanos was supposed to kick off with Jason Aaron and Simone Bianchi’s Thanos Rising. The first issue cover features a vicious looking Thanos with either alien blood on his face, or a serious Apple-tini drinking problem.

It looks like a comic featuring the Marvel U’s most interesting villain, written by the gritty, tough-as-nails, critically acclaimed writer behind Wolverine, Punisher Max, & Scalped.

And it reads like Diary of a Wimpy Kid without the laughs.

In retrospect, I don’t know why I didn’t see this coming, but Thanos Rising is an attempt to write the true origin of Thanos.

And then as a child.

And then as a teen.

In essence, the first two issues of Thanos Rising have made it their sworn duty to answer the unasked, potentially unthought question: What made Thanos into the cosmic death-worshipper that he is?

Even worse, Aaron’s telling of this NEVER BEFORE SEEN ORIGIN! is loaded with every stock “bad guy origins” filler we’ve ever seen.

Born to at least one unloving, cruel parent? Check! His mom tries to kill him immediately.

Has a generally difficult time at school and then suffers one immense tragedy? Check & check! The kids think he’s weird, and then his only friends get eaten by bugs!

Let’s take a moment to pause here and reflect on the apparent point of Thanos’s ape dissection.

With each incision, each sever and slice, his hands do the asking. Who am I and why am I here?

Great. So Thanos Rising is helping us understand what it was like for Thanos – the nearly all-powerful god-like entity who at one point wiped out half the Marvel Universe, and at one point ALL OF EXISTENCE – to find himself. It wasn’t bad enough that we had to see him as a dweeby kid, now we have to picture Thanos wandering around like a deleted scene from Mulan?

A Thanos Story That Didn’t Need to Be Told

Honestly, aside from the dulling boredom of the story-telling here, the bigger problems can basically be summed up in two points:

Aaron and Bianchi’s decision to tell the Thanos origin like he’s a common serial killer from our planet is completely perplexing. As I’ve already basically alluded to, readers and comic fans have seen a lot of bad guys over the years, and we know the tropes and cliches that affect each.

Why would this be the chosen approach for Thanos, a cosmic force, the only villain to surpass Dr. Doom in both achievement and ambition?

I think there is a place for deranged killer stories. Just look at Dexter. There are masterful versions of a comic detailing a shattered mind with no regard for human life. We don’t really need to reach beyond Alan Moore and Eddie Campbell’s From Hell to prove this.

I could even see this darker story-telling working in the Marvel Universe with another character. For example, Mr. Sinister. Here we have a deranged human. He can have human problems. Fine.

But Thanos? The Mad Titan? He doesn’t need to have human problems! That’s what makes him so cool!

In a lot of ways, this inherently flawed approach to the character highlights one of Marvel’s fatal flaws: the insistence to give an origin to everything.

I mean I get it. I get why this sounded like a comic worth making, and I’m guessing “Thanos Origins” sells a lot better than “Hey we’re gonna try some more cool Thanos in space stories without Jim Starlin, is that cool guys?”

So while acknowledging that this is a losing battle so long as comic fans continue buying origin stories (and don’t get me wrong, I grew up idolizing origin stories), it’s a really fresh reminder that some stories just do NOT need to be told.

There was a quote from Matt Kindt in a comic book resources interview recently that I thought summed this up perfectly:

Mystery is good sometimes, and sometimes not,” said Kindt. “Boba Fett is so great because you never really knew who that guy was, but Han and Luke are better for having a back-story and less mystery about them. Even Luke, who’s pretty straightforward for a character, had a great mysterious element to his past. So unless one of the characters in ‘MIND MGMT’ gets their own solo series, I don’t think you’ll ever know everything about all of them.

If that wasn’t enough, Patton Oswalt has a great bit reflecting the same sentiment (language kiddos!).

So to a degree, Jason Aaron and Simone Bianchi were fighting a doomed battle from the start. End of the day, fans of Thanos don’t want a nerdy kid Thanos anymore than fans of Wolverine want a sniveling, sickly boy James.

Truth be told, though, I’m far more ok with the telling of Wolverine: Origins than I am so far with Thanos Rising. The devil’s in the details, and so far the details of Thanos’s upbringing that would actually be interesting – his family dynamic with his brother, and sometime Avenger, Eros, the civilization of Titan, his relationship to cosmic entities like Kronos, etc – are way underwhelming.

This is the most damning part of Thanos Rising – Even once you accept the story being told, it’s still just a terrible story.

And while Aaron and Bianchi are both comic pros who can make anything they do passable reading, final splashes like the one I’m about to reveal undermine any credibility this story ever had.

Obviously this whole thing is very spoiler-y, but the below is particularly bad, so if you haven’t read #2 jump ship now.

It’s one thing to write a bad comic. And it’s another thing to completely whiff on what makes a character special. But to then compound that with basically torture-porn of the villains own mother?

Because of course she should be wearing her finest lingerie as Thanos makes some very important strides towards self-actualization.

As shock value, this is just an embarrassing play. There’s zero emotion attached to the scene, just an eye-roll and quick reach for the newest issue of Hawkeye.

The horrible truth here, though, is that I’m going to continue buying Thanos Rising in the hopes that in the next issue Jason Aaron and Simone Bianchi will actually start telling Thanos stories.

This – whatever Thanos Rising #1 & #2 aims to be – is NOT a Thanos story. This immensely human, formulaic character is NOT Thanos! I refuse to accept this as canon, as origin, as much of anything other than a misguided lead-in to Marvel Now’s pending Infinity event.

Issue #3 offers the real test. So far this is the worst Thanos story I’ve ever read. Here’s to hoping that changes.