Infinity Crusade is the third installment of the Infinity series, which means that comic fans of the early ’90s had already had their wallets tried by two similarly themed events in short succession. Though it’s difficult to know how this series would have read if one were returning to the comic shop every week only to see all their favorite titles had been sucked into the event, in omnibus form, we’re allowed to read Infinity Crusade all the way through, uninterrupted, as a 1200-ish page complete story.

As someone who had only read the crossover in bits and pieces beforehand, I found that the story greatly benefits from the collection by saving its reader from having to run quite literally all across the Marvel Universe to find random, loosely-connected issues. What we’re left with is a crossover that delivers on all its promises by giving fans the high-impact moments they want, with no shortage of compelling character beats among its sprawling cast. END_OF_DOCUMENT_TOKEN_TO_BE_REPLACED 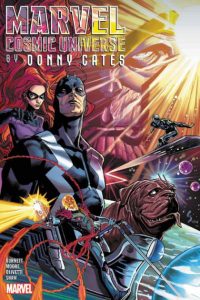 These elements return again and again in Cates’ work. They’re also why he’s such a natural fit for Marvel’s cosmic lines; his voice is so big, he really benefits from that scale. It seems only right he have a tome to match: Marvel Cosmic Universe by Donny Cates. END_OF_DOCUMENT_TOKEN_TO_BE_REPLACED

Evil-doing adversaries are an integral part to superhero storytelling, but it’s actually kind of a rarity that they ever get to helm their own series. Sure, you have fence-straddling “anti-heroes” such as Venom or Deadpool and even grey-area vigilantes like the Punisher, but the straight-up baddies? Maybe it’s this lack of respect that keeps them on the wrong side of the tracks. Who knows?

However, there are occasions when Marvel’s antagonists get to not only “break bad” but also get their get their due and break out in popular acclaim. Let’s take a look at some of those examples now, or, as Stan Lee would say… “Bring On The Bad Guys!” END_OF_DOCUMENT_TOKEN_TO_BE_REPLACED

We’re still a few weeks away from the crescendo of Avengers: Endgame and everything is still very much “Thanos Wins

”. However, in the character’s near half century of existence, for as many times as he’s been poised for ultimate triumph, he is in turn taken down.

Let’s take a look now at some Marvel Comics showing how the Mad Titan has been beaten. END_OF_DOCUMENT_TOKEN_TO_BE_REPLACED

A eugooglizer. One who speaks at funerals. Or did you think I’d be too stupid to know what a eugoogly was? — Derek Zoolander

For all the talkof the Marvel Cinematic Universe being the tail now wagging Marvel Comics, the publisher is still capable of zigging just when you think they’ll zag into the corporate synergy. Case in point: Thanos is dead. Long live Thanos.