This is the first of several pieces that looks at the core “A.X.E.: Judgment Day” story from start to finish. We’ll focus on the event series A.X.E.: Judgment Day and the tie-ins written by event author and architect and ongoing Immortal X-Men writer Kieron Gillen (working with artists Valerio Schiti, Guiu Vilanova and Lucas Werneck, respectively), as well as the X-Men: Red tie-in issues from Al Ewing and Stefano Caselli, the surprise mini-masterpiece Legion of X #6 from Si Spurrier and Rafael Pimentel and Marauders #6 from Steve Orlando and Andrea Broccardo—which isn’t as essential as the others but is significant for devoting an entire issue to Krakoan reactions—specifically, the Marauders’—to the Progenitor’s judgment; indeed, the story deals with developing a healthy response to a false god’s terrifyingly bratty judginess.

So, we’re narrowing in on what’s already a wealth of material, paring down from 30+ issues with the tie-ins to appreciate the core of this epic story and its most integral side stories, while appreciating the nuances of character, theme and continuity that each storyteller brings to this apocalyptic barnstormer.

END_OF_DOCUMENT_TOKEN_TO_BE_REPLACED

The first volume of Eternals by Kieron Gillen and Essad Ribic is a revelation in a couple ways. For one, it manages to completely reorient the Eternals’ relationship with humanity by revealing that their signature immortality comes at the cost of human life, the very beings they believed they were intended to protect, a revelation which led the core cast of the series to cast their lot with the Eternals’ previously-sworn enemies, the Deviants. For another, it had us all going “hey, there’s an Eternals comic that’s actually good and fun?” for the first time in a long time (possibly ever). END_OF_DOCUMENT_TOKEN_TO_BE_REPLACED 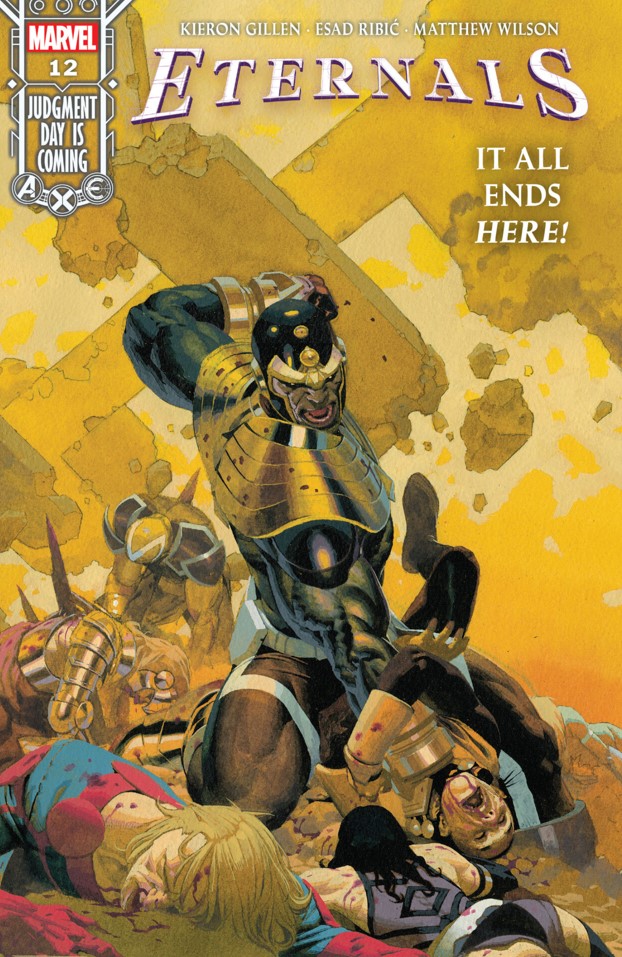 Ah, Gillen knows how to write epic and write smart. If his recent track record is anything to go by, and I think it certainly is, Judgment Day promises to be a special treat—and thankfully while it’s sure to be big and consequential, it won’t be watered down as a company-wide event. Even so, I’m happy to bet it will be better, at least in terms of the comics I’d like to read more of, than any such recent Marvel events (King in Black, Empyre, even Heroes Reborn, etc.). It will clearly be focused on the two rosters of Gillen’s two titles, Eternals

and Immortal X-Men, but it’s also refreshing that he’s getting a crack at writing the Avengers, especially as Earth’s Mightiest have been, for the past several years, in dire need of a fresh perspective. 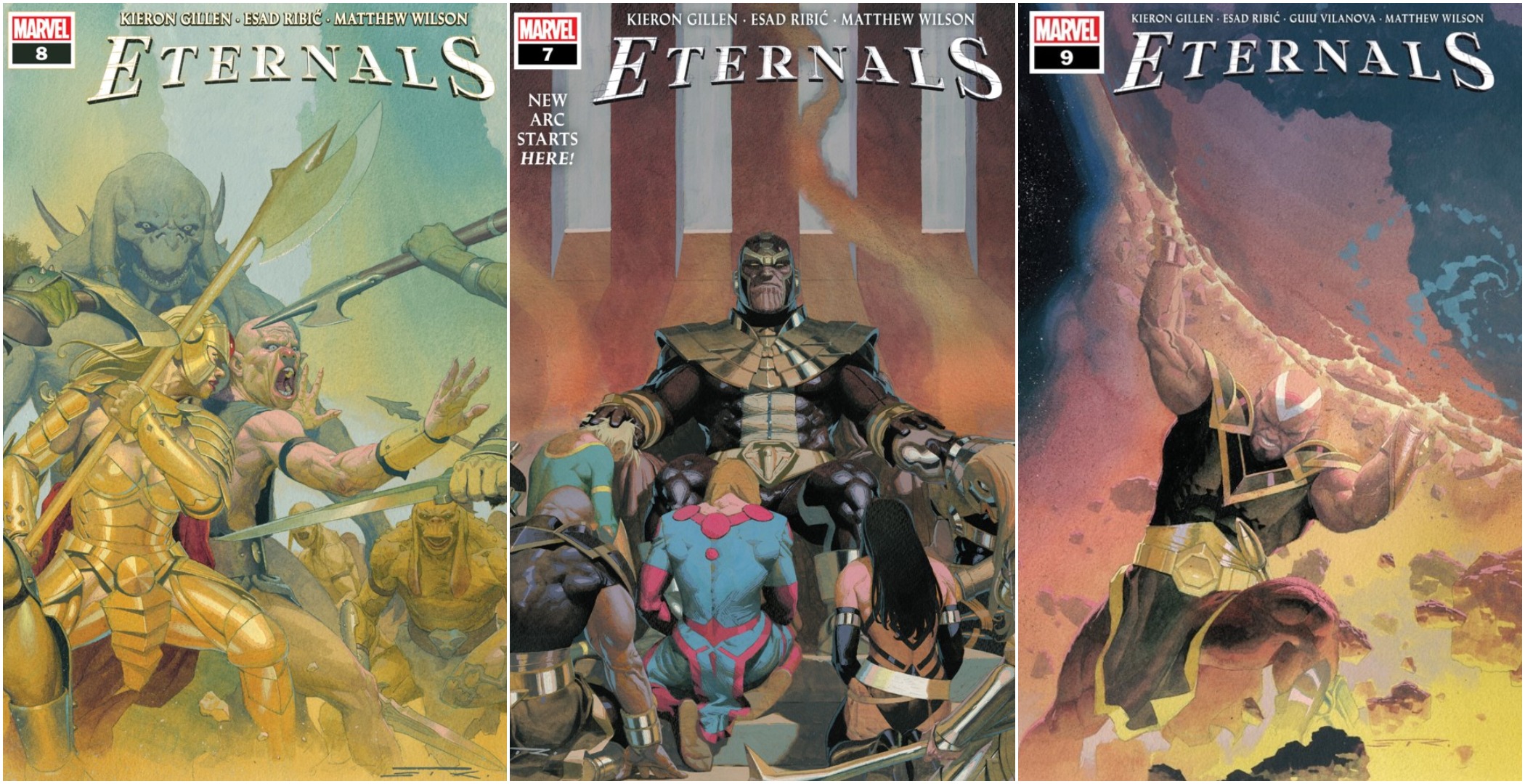 All Your Eternals Needs in One Title

For any Marvel heads, especially X-Men/Krakoa fans, who have felt some trepidation at diving into Eternals

from legendary comics scribe Kieron Gillen (The Wicked + The Divine, Phonogram, Young Avengers, and many more, most currently Immortal X-Men) and largely drawn by the master of god epics, Esad Ribic (of Hickman’s Secret Wars and Jason Aaron’s Thor: God of Thunder)—just dive right in if you haven’t!

Especially do so alongside Free Comic Book Day, May 7—when Gillen’s A.X.E.: Judgment Day prelude drops, drawn by another extraordinary talent on such classics as Hickman’s S.H.I.E.L.D. and most recently Eternals: Thanos Rises, which we’ll look at below. The event’s acronym stands for Avengers, X-Men and the Eternals, and it’s these latter folks that most modern readers will likely be familiar with only from the recent blockbuster movie or maybe even as the strange, “high-concept” subject of what might be one of Jack Kirby’s duller projects, from 1976 (a rarity for King Kirby). Well, guess what? That’s perfectly fine!

END_OF_DOCUMENT_TOKEN_TO_BE_REPLACED

With myriad “Brand” new and “Sinister” twists around the corner with the imminent debut of X-Men: Red by Al Ewing and Stefano Caselli and Immortal X-Men by Kieron Gillen and Lucas Werneck, we’re here to recap what seems most relevant from Ewing’s S.W.O.R.D., his spectacular first foray into the X office, and look back briefly at Gillen’s excellent Uncanny run of a decade ago, particularly his indelible transformation of Mister Sinister into true high camp villainy, before turning to his current stunningly epic Eternals, catching X readers up on how much that heretofore forgotten franchise has been utterly transformed, worked over from the ground up and made storyable at last, complexly laced with broken palace politics by the notorious gamesmaster who will no doubt ring like Machiavellian discord through the Quiet Council, much to its immortal disquiet. Plus! We shall speculate on this summer’s looming three-way conflict between the Avengers, the X-Men and the Eternals—the Immortal X-Men scribe’s A.X.E.: Judgment Day.

(And, with great good fortune, in order to fully enjoy this event, it appears that readers need not bother with the dreck that is Jason Aaron’s Avengers.)

We’ll start with a look back at S.W.O.R.D., but the majority of this piece is about Gillen’s Eternals and speculation on Judgment Day… END_OF_DOCUMENT_TOKEN_TO_BE_REPLACED