Evil-doing adversaries are an integral part to superhero storytelling, but it’s actually kind of a rarity that they ever get to helm their own series. Sure, you have fence-straddling “anti-heroes” such as Venom or Deadpool and even grey-area vigilantes like the Punisher, but the straight-up baddies? Maybe it’s this lack of respect that keeps them on the wrong side of the tracks. Who knows?

However, there are occasions when Marvel’s antagonists get to not only “break bad” but also get their get their due and break out in popular acclaim. Let’s take a look at some of those examples now, or, as Stan Lee would say… “Bring On The Bad Guys!” 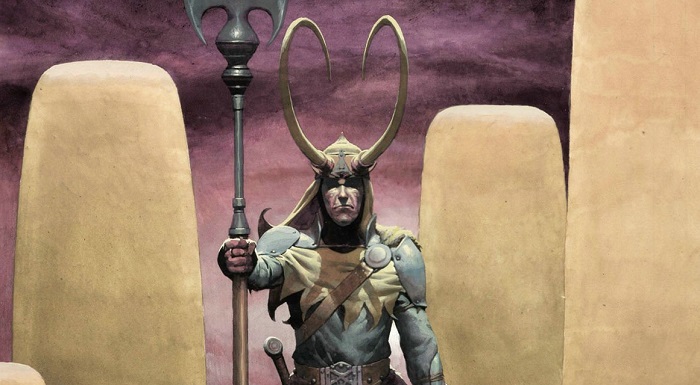 There’s certainly some truth in the saying that no one is ever the villain of their own story and perhaps no one personifies this more than the Norse God of Mischief. More to the point, the 2004 Loki

mini-series by Robert Rodi and Esad Ribic tells a tale of the trickster triumphant over all of Asgard!

Bear in mind, this is long before Tom Hiddleston becomes a thing- so anyone coming fresh from a MCU perspective might be jarred by the outright snarliness of the Laufeyson’s personality. In terms of character study, this is a gorgeously painted and entertainingly succinct package. It doesn’t even matter that it also kind of falls outside of strict continuity canon. Just think of it as tale from before a previous Ragnarok or whatever, much like Matt Fraction’s Thor: Ages of Thunder

specials and you are good to go!

However, for those looking for something more in keeping with the “Age of Hiddleston” per se, a great jumping-on point would be any of the work by Kieron Gillen. The Siege: Loki

one-shot is something of a “Zero Issue” type starting point, as it projects Loki’s loophole for his future reincarnations- a prospect that persists to this day, what with his seemingly dying and coming back every couple of years now. From there, any of the Journey Into Mystery

would be a recommended continuation.

As Marvel’s premier villain of the Silver Age, Doom is also historically the publisher’s first villain to command his own series. Granted, the first time was a split-book serial that ran in Astonishing Tales for all of eight issues released every other month in the very early 1970s. The second effort was anchoring Super-Villain Team-Up

in the mid-1970s. That lasted for about fifteen issues running every other month again. But, still, progress…

Aside from the acclaimed Graphic Novel team-up with Dr. Strange (Triumph And Torment

), there’s been a few minis of not very great importance. Of course he’s a perennial fixture in Fantastic Four– like the uncle nobody actually gets along with but is still invited to family gatherings out of obligation. It’s actually not until 2005’s Books Of Doom

by Ed Brubaker and Paolo Raimondi that Victor finally gets his due. Spread over six issues, Doom recounts his secret origin to a journalist in only the most Doom-ish way he can because could Doom do any less?? Never question Doom! (err, where was I???) 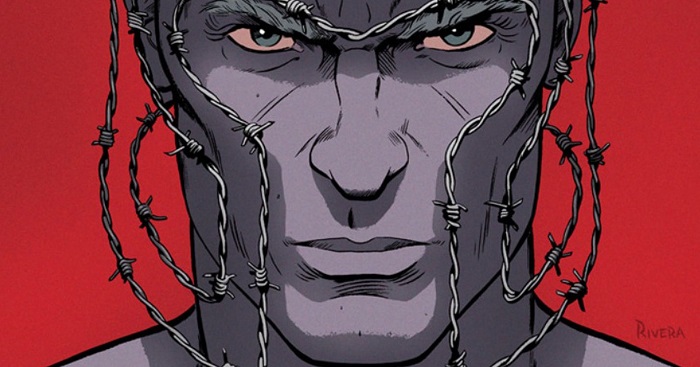 Graphic Novel), the Mutant Master of Magnetism also becomes a little less of a generic leftover from the Silver Age, what with the bucket helmet and the fist-shaking and the penchant for saying, “Bah!”. From there, his appearances typically hold a little more gravitas. Some might even say he’s had a few good points.

Indeed, Magneto’s deep complexity and conflicted nature is what makes the character so eternally compelling. A great case study of this is his 2014 series, Magneto

by writer Cullen Bunn and company.

The gist of it is very much a Dr. Dre lyric come to life: “If you keep [expletive] with me, you gonna turn me back into the old me…”. And for a character with lifelong ties to mutant terrorism just trying to exist as an old man, honor the memory of his friend Charles Xavier the best he can, that is probably not a wise threshold to cross. The series ends with Mags trying to stave off the literal end of the world during the Secret Wars

Erik Killmonger is noteworthy for this list- especially considering that the character’s been on the deceased bench for the last eleven years! Sure, he’s had some iconic appearances as an opponent of the Black Panther- from Don McGregor’s classic Jungle Action

saga of the 1970s to more recent runs by Christopher Priest and Reginald Hudlin, respectively, but current interest revolves heavily around his MCU portrayal by actor Michael B. Jordan.

Much like Books Of Doom, Killmonger recently featured in his own secret origin mini series (Black Panther: Killmonger – By Any Means

, which seems to allude that there could be a comeback possibly in the offing in the very near future. Furthermore, it couldn’t be coincidence that the Panther’s current intergalactic adventures are pitting him against an Emperor N’Jadaka (Erik’s real name) from another time and space. The speculation breadcrumbs are there, hmmm… 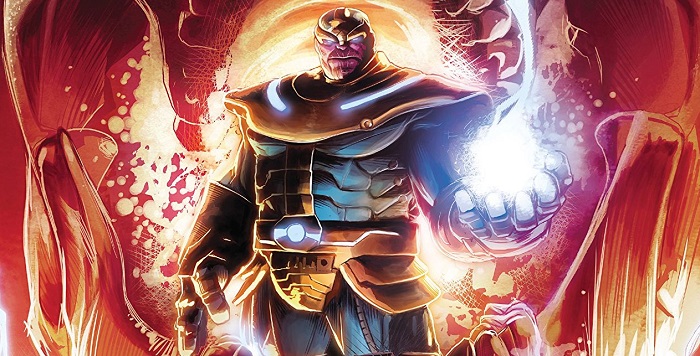 There’s been so much written about the Mad Titan of late (some of it even by yours truly) that there feels like maybe there’s not that much left to say at this point. All the same, Ol’ Prunechin needs inclusion- wouldn’t be right without him. But what’s the one story of his that needs to be read? Tough question but quite honestly, it might very well be his last (proper) one: Thanos Wins

by Donny Cates and Geoff Shaw.

For those inclined toward the work of Thanos creator, Jim Starlin, have no fear- there’s still a lot of the classic elements. You have time travel. You have the whole “face off with the future self” thing a la 1970s Warlock. But yeah, it’s also smeared up with the greasy fingers of some new kids as well. Case in point, Thanos doesn’t even walk away as the real star of own comic! That honor goes to Cosmic Ghost Rider.

Speaking of which, a strong recommend to the Cosmic Ghost Rider

mini by Cates and Dylan Burnett. The spiritual sequel to Thanos Wins, it is entitled “Baby Thanos Must Die”. That basically sells itself and in many ways, it is actually the superior vehicle but it makes way more sense in context of this first piece.

Although it’s a fairly long-lived franchise, it’s one that’s seen many variations, permutations, reinventions and reboots. Beginning as the Masters of Evil masquerading as heroes, that gives way to a rehabilitation and redemption squad championed by Hawkeye when many of the same villains decide they genuinely enjoy doing good. Things somehow eventually wander into some kinda “keeping the title alive in name only” weirdo super-powered fight club deal, but the less said about that the better.

However, what stands as possibly the pinnacle run is the circa 2007 Thunderbolts

by writer Warren Ellis and artist Mike Deodato, Jr. In the aftermath of the first superhuman civil war, the T-Bolts are rebranded as US Marshals, chasing down unregistered superhumans. Doesn’t sound so bad until you realize they’ve given career offenders like Bullseye, one of the von Strucker kids, and brain-eating Venom badges and authority! Even better, pulling their strings as team handler is Norman “The Green Goblin” Osborn.

It’s not even so much the “yikes, these guys are the law now” factor as it is the meta commentary on perverse celebrity marketing and idolization. Looking back on it now, it actually comes off as both quaint and prescient at the same time.

Although Ellis moves on after after two arcs (“Faith In Monsters” and “Caged Angels”), Deodato continues the flavor as the artist and the cast move to Dark Avengers 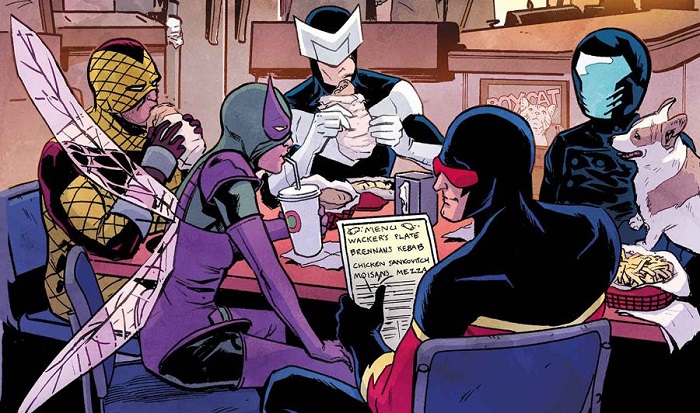 They call themselves The Sinister Six but there’s only five of them because… reasons. Hilarity and hijinks only ensue from there. Imagine the multi-party double-cross fest of a heist macguffin grab gone wrong in the vein of Guy Ritchie’s Snatch superimposed over an Adult Swim cartoon a la The Venture Bros. or Harvey Birdman, Attorney at Law. The Tick would be another great frame of reference here. Basically, Superior Foes of Spider-Man

is from the same editorial wheelhouse as Matt Fraction’s Hawkeye

and being released concurrently with that trendsetting piece of work, it’s hard not to see its fingerprints here as well.

Which is not a bad thing. Pathos for characters like Boomerang, Speed Demon and the Shocker? Who ever thought they’d have that in them? Somehow writer Nick Spencer has tapped into genuine fist-pumping validation to every slacker, underachieving tendency anyone of us has ever had and artist Steve Lieber brings it to life. Like actual life. There is true human sincerity in a comic wall to wall with dirtbags. Seriously.

Sometimes the losers win. Even if it’s just for a seventeen issue run that’s really just one longform story taking place over no more than a couple of days time (wherein Spider-Man doesn’t even truly appear).