It’s entirely possible that history will look back at 2020 (and history will have plenty of reason to look back on this year) as the year that broke DC Comics. It’s definitely too early to proclaim absolute doom with unwavering certainty, but for the first time in a very long time, the future of DC Comics as a publishing entity – as one half of comics Big 2 – is in serious doubt.

Tremendous layoffs struck DC Comics in August 2020, as the effects of the ATT / Warner Brothers merger fully materialized. The publishing line was gutted, and despite Jim Lee’s efforts to assuage concerns that this is the end of DC Comics, there’s little use denying the publisher won’t be the same for some time.

Even before this point, DC has struggled in 2020, as the publisher’s line of comics has fractured significantly compared to what fans are accustomed to. The post-2016 Rebirth positivity is a vague, distant memory, and the interconnected ongoing DC Comics Universe is a scattered array of middling fiefdoms. Historically my “best of” lists concentrate on the best 10 comics that would be considered in continuity for the Big 2 publishers, but that’s harder and harder to really execute.

This reality is in part salvaged through the publisher’s extended imprints, including DC’s YA graphic novels, Black Label, and the final swan song of Young Animal. As you’d expect, through it all, there are good creators making very good comics. I don’t foresee a time when that’s not the case!

Below are my favorite DC Comics of 2020, listed from 1st favorite to 10th. The first 5 entries have also been included in some capacity on my complete “best comics of 2020” guide linked below! 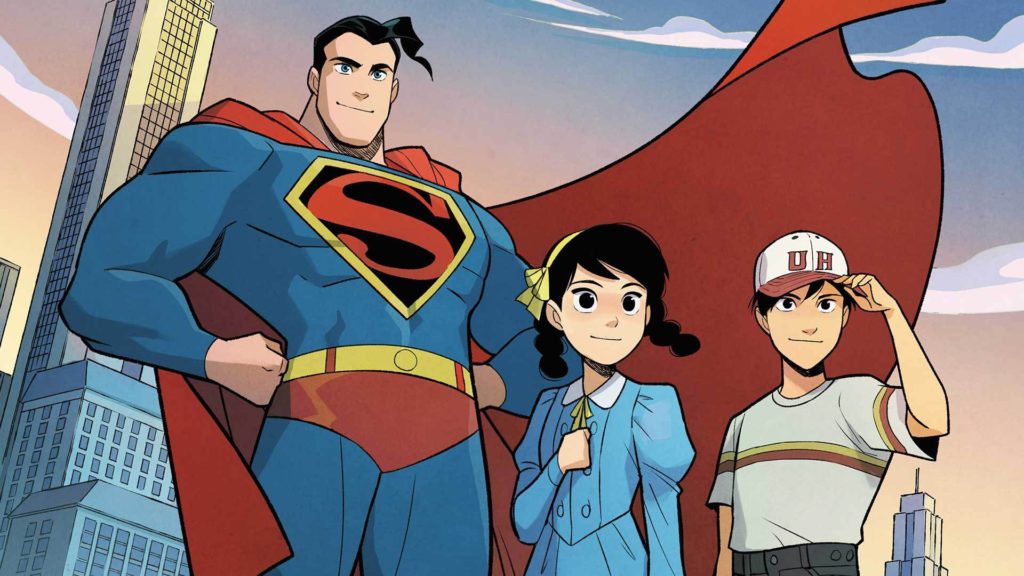 Not much in comics this year quite matches the pure storytelling and clear messaging bliss of Gene Luen Yang and Gurihiru’s Superman Smashes the Klan. For any of us who were privileged enough to think reviving a 1940’s Superman radio serial about fighting the Ku Klux Klan was quaint in our ‘modern’ age, 2020 has proven time and time again that the lessons of racial justice in these pages are as relevant as they’ve ever been.

Superman Smashes the Klan is already ranked as one of my 100 favorite comics of all time!

Turns out handing over a totally standalone Green Lantern universe series to Hugo Award winning writer N.K. Jemisin is a pretty good bet. Jemesin and Jamal Campbell’s take on the Corps is unlike anything in DC, with Jo Mullein and the City Enduring instantly making the mythos the freshest and most compelling its felt in ages.

Often times, Green Lantern stories feel like they must be consumed as part of the larger Corps whole stretching back decades, but Far Sector is so singularly its own story that so long as you grasp the very basics (power ring, Guardian overlords), it’s as approachable as anything else in good science fiction. At the end of the day, there’s a reason Far Sector is on Comic Book Herald’s list of the best 100 DC stories since Crisis before the 12 issues are even concluded!

When I made my early best DC Comics of 2019, I included Jimmy Olsen by Matt Fraction and Steve Lieber as my #1 pick before I’d read a single issue. I was that confident just based on the creative team, and the excellent short story they contributed to the Superman Leviathan Rising Special #1 event lead-in (oh to be young and excited about the possibilities of Event Leviathan!).

For the first handful of issues, though, the sidewinding structure and convoluted narrative had me scratching my head. The approach of Fraction and Lieber was quite unlike anything going in superhero comics, but it also required a lot of careful consideration and focus that my wee monthly supers brain just wasn’t prepared for. Jimmy Olsen slipped in my mental rankings, but always with the knowledge that I’d need to revisit the book once all 12 issues were told. 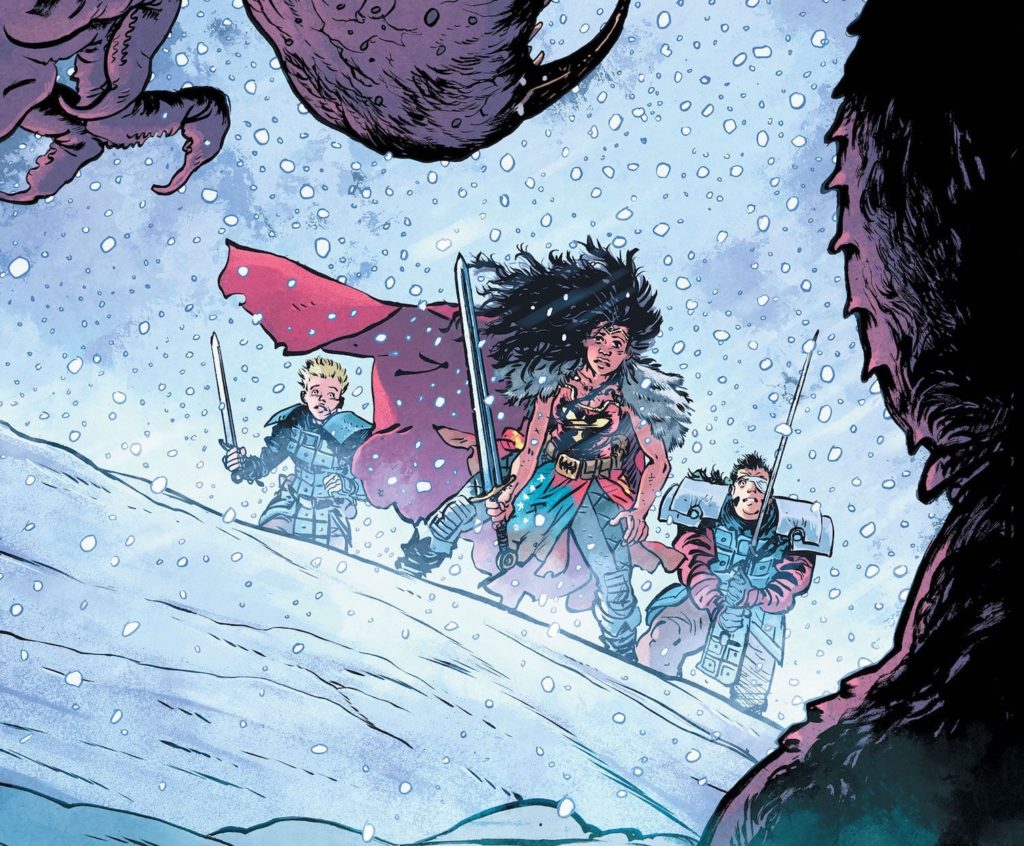 I’m such a fan of Daniel Warren Johnson as a creator – especially after Murder Falcon, a book I can’t recommend highly enough – that I had preposterously high hopes for his 4 issue Black Label series Wonder Woman: Death Earth. Amazingly, the post-apocalyptic take on a recognizable but dramatically altered DCU (Diana Centric Universe) lives up to the hype and then some.

It’s definitely a weird thing to watch Grant Morrison exit superhero comics like this. Not with a bang but with the collective whimper of a fandom that’s either 1) completely put off by the density and uncompromising encyclopedia of story or 2) Wondering why in the hell their beloved Morrison is walking away with something so seemingly self-indulgent.

I’ll admit, as much as I’ve enjoyed the ride, The Green Lantern is in many ways the type of work only a “walking away from supers” Grant Morrison could get away with. In my book, Liam Sharpe is doing career best work across the entire two season run, but even Sharpe can only do so much with some of Morrison’s least approachable impulses. All of which is to say, I understand the challenges of this work, but I’m also invested enough to appreciate the heapings of Silver Age Lantern lore at the center of this Hal Jordan centric affair, as well as Morrison’s desire to return to Multiversity one last time.

Tom Taylor keeps crafting universes out of gimmicks, and despite every indication that these things simply should not work, giving Taylor the keys to his own DC Universe kingdom keeps bearing fruit. After the success of Injustice, Taylor launched a laughably punny riff many rightly compared to Marvel Zombies, only to see the DCeased universe become every bit one of the biggest smash hits of 2019.

“Dead Planet” is the sequel to a series that saw DC’s Earth completely ravaged by an Anti-Life zombie virus, and somehow it manages to retain the stakes and traumatic loss by focusing on the children or proteges of many known Justice Leaguers.

I’m no Hellblazer head, but between the New 52 and DC Rebirth, bringing John Constantine back to a Black Label meets Sandman Universe home for mature readers (who, ya know, still like jokes about genitals and big fiery demons) is the most interested I’ve been in the character in a decade. John Constantine, Hellblazer is a great take on the legacy of DC’s legendary British bastard, by Si Spurrier, Aaron Campbell, Jordie Bellaire, and Aditya Bidikar, with covers by John Paul Leon.

The only real negative here is that this run on Hellblazer has already been cancelled, ending with issue #12, clearly well before Spurrier and company could tell the full story they wanted to tell. It’s a depressing revelation, but it can’t take away the good work this creative unit was able to produce in 2020. 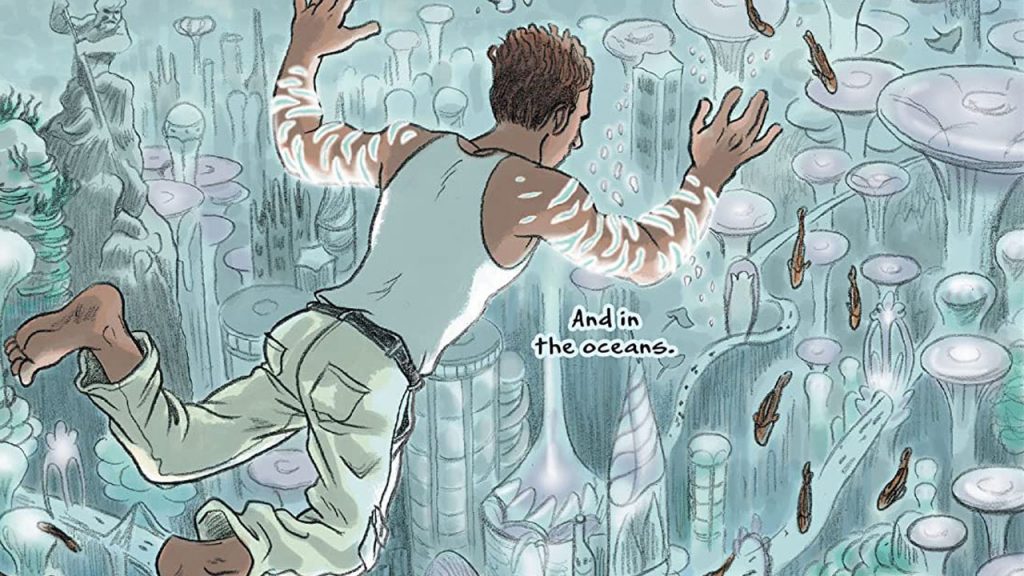 You Brought Me the Ocean

Amidst all the trouble DC is encountering with their comics publishing arm, the YA line of DC graphic novels is incredibly consistent, and expanding at a rapid rate. In addition to targeting a long ignored enormous market of readers, these DC graphic novels also tend to do a much better, more clear-eyed job integrating issues of diversity and social justice naturally into their stories.

You Brought Me The Ocean by Alex Sanchez and Julie Maroh is a fantastic example, developing an origin story for Jackson Hyde, aka Aqualad, one of DC’s few openly gay characters, and a black male teenager. One of the clearest takeaways from the recent, shocking passing of Chadwick Boseman is that representation in art matters tremendously. You Brought Me The Ocean excels in this regard, effortlessly weaving an array of intersectionality throughout Sanchez’s keen understanding of queer youth, and Maroh’s gorgeous, expressive artwork.

I have to admit, there’s a tricky cognitive dissonance I feel with the relaunched Sandman Universe line of comics, where I’m simultaneously holding the thought that I’m not really sure I need more from the dreamscape Gaiman and company built, but also recognize the work set inside The Dreaming has been quite good! Si Spurrier and Bilquis Evely’s The Dreaming

was a great extension on what this new era can be, and the latest 2020 maxiseries launch of The Dreaming: Waking Hours from G. Willow Wilson and Nick Robles is following in that tradition exactly how I’d hope.

The Tom Taylor and Bruno Redondo era of Suicide Squad is deceptively challenging, largely (although not entirely) moving away from the tried and true Squad of Amanda Waller leading DC villains, and creating their own characters and system for a newer version. I’ve realized reading the run just how conditioned I am when reading Big 2 comics to expect the shorthand of known Big 2 characters. I can pick up any issue focused on Harley Quinn and Deadshot and know their whole deal without much exposition, but when the focus is on Wink and the Aerie? I have to focus and pay attention!

— There’s a lot to be said about Strange Adventures from Tom King, Mitch Gerads, and Evan “Doc” Shaner, but this is one twelve issue series where I”m definitely going to have to wait and see how it all comes together. Visually Strange Adventures is already a triumph, but I need to see where King is taking us storywise before I’m really certain how I feel. Right now, I will definitely say it’s up there with Marvel’s Guardians of the Galaxy for the 2020 book I most eagerly read new issues of without feeling certain about placing it among the best books.

— If I was a bigger fan of Hill House horror, I’d almost certainly have to find a place for The Dollhouse Family (for the record, that says more about my own squeamish sensibilities, and less about the quality of the line!).