While I still wish it was a shockingly transformative piece of DC Universe canon, the “Elseworlds” style DCeased event by Tom Taylor, Trevor Hairsine, Stefano Guadiano, and Rainier Beredo is a hit, and a highly enjoyable one at that.

) is a fool’s errand at this point. So a “Marvel Zombies” of the DC Universe might seem like a hollow reprise, but in Taylor’s hands it becomes a captivating and genuinely affecting take on (don’t call it a) zombie apocalypse.

Before I go any further, though, let’s get to the reason many of you are likely here, and that’s for the proper reading order of the event. It’s quite simple given there’s only one non-event one-shot to mix into the bag, but since that issue’s publication date doesn’t quite align with the event’s internal timeline, it’s worth checking: 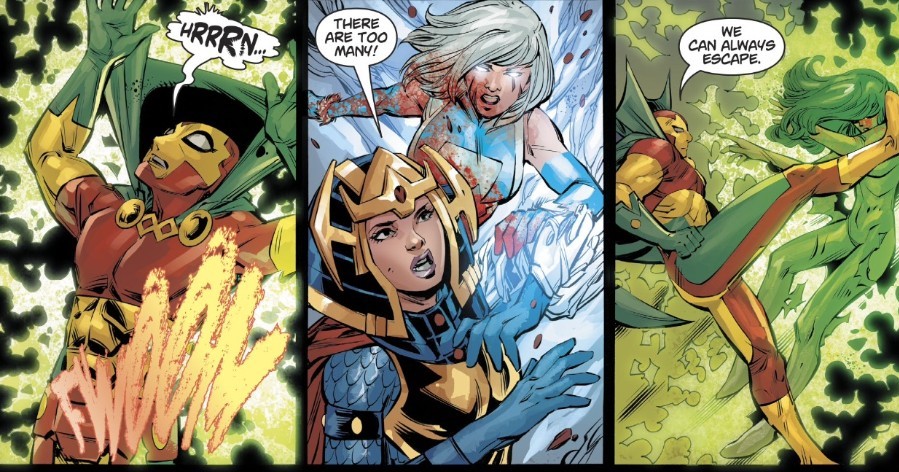 Collects: DCeased: The Unkillables #1 to #3

Your choice with the first issue of “Unkillables” is to read it as published (after all of DCeased #1 to #6 had been released), or to read it in lockstep with the unfolding apocalypse.

“Hope at World’s End” is a Tom Taylor written DC Digital-first extension of the “DCeased” universe, set during DCeased #5, and filling in some gaps during that timeframe.

for free right now to see if the series feels like something you’ll enjoy.

The technicality that keeps DCeased from operating as pure zombie fiction is thoroughly Fourth World, and beautifully connected to the DC Universe cosmos. I won’t even spoil it other than to say Darkseid is very much involved. Once the techno-virus hits Earth (no not that techno-virus), the scope, scale, and delivery method all lead to even more complications than your typical Walking Dead nightmare.

The last question stems from my favorite entry in the series, the DCeased: A Good Day to Die one-shot. The 48 page addition follows Big Barda and Mister Miracle’s reaction to the outbreak, pulling in the likes of JLI compatriots Blue Beetle & Booster Gold before turning to everyone’s favorite bastich, John Constantine.

We already knew Taylor writes a great Constantine, but his Scott and Barda is a perfect blend of the heart, comedy, and infectious energy that Tom King and Mitch Gerads so brilliantly delivered in their 12 issue series. Hairsine and company’s 9-panel grids for Scott and Barda are a nice callback as well. I may never listen to Cher the same way again.

One of the most challenging elements of DCeased stems from Taylor’s previous success, as it’s somewhat difficult to place the events outside of the established character-work of Injustice. After all, Injustice focused heavily on Green Arrow, Dinah Lance, Batman, Damian Wayne, Booster and Ted, Constantine… and here they are all again, replaying many of the same beats.

The biggest difference is of course that Taylor gets to write heroic Superman rather than grieving fascist Superman, and guess what, he’s great at it! DCeased is an endless exploration of hope swallowed in waves of despair, and Superman is consistently given the moments of aching sorrow that sell the book’s struggle.

All in all, I listed DCeased as one of my favorite DC books of 2019 early in the event, and my estimation has only increased since then. It’s a potentially tired idea played out with earnest enthusiasm, and an easy continuity-free book to pick up for fans of DC characters.