The Phalanx hold a strangely prominent place in my heart due the techno-organic alien invader’s involvement in the last season of X-Men the animated series. Since X-Men TAS did such an amazing job of adapting “Classic” X-Men stories like the Dark Phoenix Saga, I generally assumed the Phalanx Covenant was from an earlier 70’s or 80s story arc, at least until I put together the My Marvelous Year reading club and realized the comics and animated Phalanx were basically released in lockstep!

As cosmic entities go, the Phalanx are nowhere near as prominent as the Kree, Skrull, Shi’ar or frankly loads of other Marvel creations. Nonetheless, the alien race that takes over societies by transforming all sentient life into part of the Phalanx hive-mind (or, uh, energy) has a few key moments in Marvel history before their 2019 re-emergence in the Jonathan Hickman written Powers of X #2.

Below you’ll find a guide to the comics history of the Phalanx, including their ties to the Technarchs, the alien race that gave us the New Mutant’s own Warlock.

While most New Mutants fans will recognize this stretch of team history as the “Demon Bear Saga,” it also marks the debut of Warlock (not to be confused with Marvel’s Adam Warlock), a mutant member of the alien Technarch race. Warlock, the transmode virus, and the Technarcy are inextricably linked to the Phalanx, to the point that Chris Claremont and Bill Sienkiewicz get co-creator credits on the aliens they never named.

You don’t have to read these comics to understand the Phalanx but 1) they’re great X-Men Universe books and 2) understanding the dynamic between the Phalanx and the Technarch is useful! 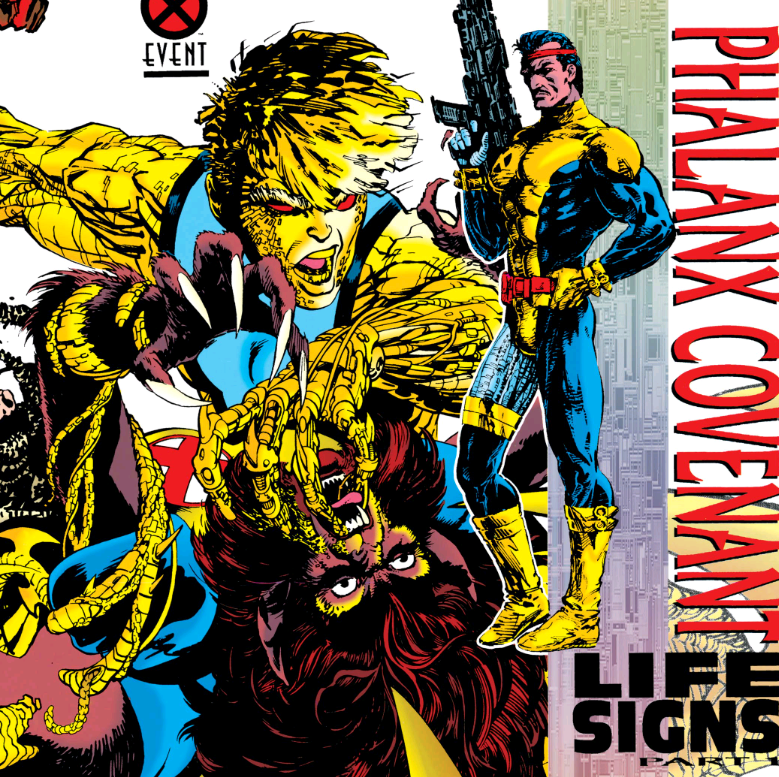 90’s Origins of the Phalanx

There’s a whole lot of 90’s X-Men continuity intertwined with the official debut of The Phalanx, in a sprawling saga that spans titles, characters, and history. The long and short of it is longtime mutant-haters Cameron Hodge and Stephen Lang so hated mutants, they willingly infected themselves and their followers with the techno-organic virus that brings the Phalanx hive-mind to the front door of the X-Mansion (and beyond).

The good parts of the Phalanx Covenant include John Romita Jr’s art, the earnest commitment to Douglock, and the introduction of Generation Next!

The Phalanx return briefly during an X-Men story with Gambit, Bishop and Beast in space investigating the mysterious disappearance of the Shi’ar empire.

These issues are most relevant for co-creator Joe Madureira’s return to the Phalanx design, opting for a renewed alien design that takes less inspiration from Bill Sienkiewicz’s original Warlock, and more from symbiotes and late 90s cool. 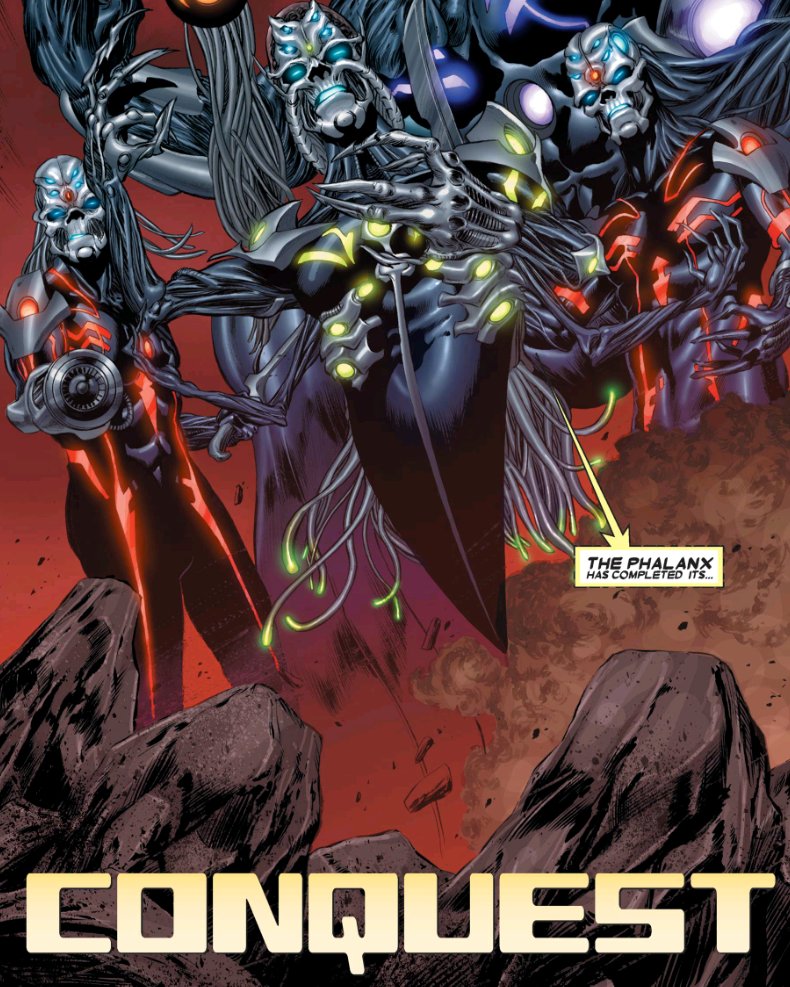 The entire Marvel cosmic saga of the 2000’s is well worth reading, but it remains fascinating that the follow-up to Annihilation

– one of Marvel’s greatest comic book events of all time – increased the stakes through the threat of the Phalanx (and a well-known Earth-based villain that I won’t spoil here!).

For me, “Conquest” never quite lives up to its predecessor, but that’s a very high bar. The event does manage to make the Phalanx feel as nearly unbeatable as Annihilus and his Annihilation Wave, and also begins the Nova and Guardians of the Galaxy series that would define the excellence of this corner of the Marvel Universe.

If you’re only going to read one series to try to get a feel for the Phalanx, I’d recommend the vast majority of modern readers start here with Annihilation Conquest.

During the build to House of X and Powers of X, writer Matthew Rosenberg made substantial use of Warlock and the transmode virus in his various X-Men comics. This never quite got to full-blown Phalanx situations, but it’s worth calling out the connective tissue between these comics and the return of the cosmic entity in Powers of X.

As mentioned throughout, Powers of X brings back the Phalanx in a major way, asserting their prominent place in the future timeline cosmic hierarchy.