X-Men Legends. At first glance, the title is a little confusing. Are the stories legendary, or the creators involved? The answer is a little bit of both. The stated mandate of X-Men Legends as a series is to tell X-Men stories set in various classic eras of the characters’ long history, designed to stoke nostalgia for and featuring creators with a previous connection to the era in question. Furthermore, the tales are set between specific issues, and though they are “legendary,” Marvel assured fans that these stories “count” from a continuity perspective: they are not Elseworlds or What Ifs? or Imaginary Tales. Instead, these are stories meant to reveal new information about the past.

X-Men Legends Vol. 1: The Missing Links collects the first six issues of the twelve-issue miniseries, but as of this writing, the series’ eighth issue has been published, with the general plots and creative teams involved for the remaining four issues all announced. So let’s dig into the series thus far and see how well it meets its mandate as a vehicle for nostalgia, a celebration of beloved creators, and a reinterpretation of past continuity. END_OF_DOCUMENT_TOKEN_TO_BE_REPLACED

“Say you have to kill the Avengers. Make a list. Who do you kill first? The regular guy.”

Clinton Francis Barton, a.k.a Hawkeye, made his Marvel debut in 1964’s Tales of Suspense #57

. Clint’s entrance into super-heroism was essentially an effort in trying to prove himself, combined with good intentions gone wrong. Upon witnessing the teched-out Iron Man save the day at the very circus he performs at, Clint becomes adamant that his talents in archery and swordsmanship could allow him to become a superhero too. Overnight, the teenage archer creates his own superhero persona -‘Hawkeye’- complete with a cowled costume and an array of hand-made trick arrows. Clint was ready to show the world that you didn’t have to be poisoned by Gamma or fitted with state-of-the-art technology to be a hero.

Unfortunately, Hawkeye’s first outing as a defender of justice goes awry when the police immediately mistake him for a jewel thief and he falls for the mysterious villain, the Black Widow. He does get to be an Avenger-eventually- but his identity as a hero has continued to be instructed by the fact that, as highly talented as he is, he will always experience the limitations and flaws that come with being a ‘regular’ human. END_OF_DOCUMENT_TOKEN_TO_BE_REPLACED

Neil Gaiman’s run on Sandman run ended all the way back in 1996, though he has made periodic returns to the title in books such as The Dream Hunters, Endless Nights, and Sandman Overture. Still, the Sandman mythos has steadily continued at DC, with the original The Dreaming series running from 1996-2001, the Lucifer

ongoing running from 2000-2006, and countless mini-series, one-shots, and guest appearances along the way. Still, there was never such an organized and intentional return to the franchise as 2018’s The Sandman Universe relaunch, in which Gaiman and others handpicked a crew of industry greats to help expand the story of Dream of the Endless and the many characters he encounters along the way.

Bringing in new creators to flesh out the story of the Sandman is the best thing that could have happened to the story, and by retaining overall creative vision, Gaiman has been able to ensure that the new series are all incredibly high quality books. As Si Spurrier and artist Bilquis Evely’s incredible run on The Dreaming

maxi-series was already on the docket. Each of The Sandman Universe books have brought a specific mood along with them, and Waking Hours leaned all the way into giving readers a love story for the ages.

END_OF_DOCUMENT_TOKEN_TO_BE_REPLACED 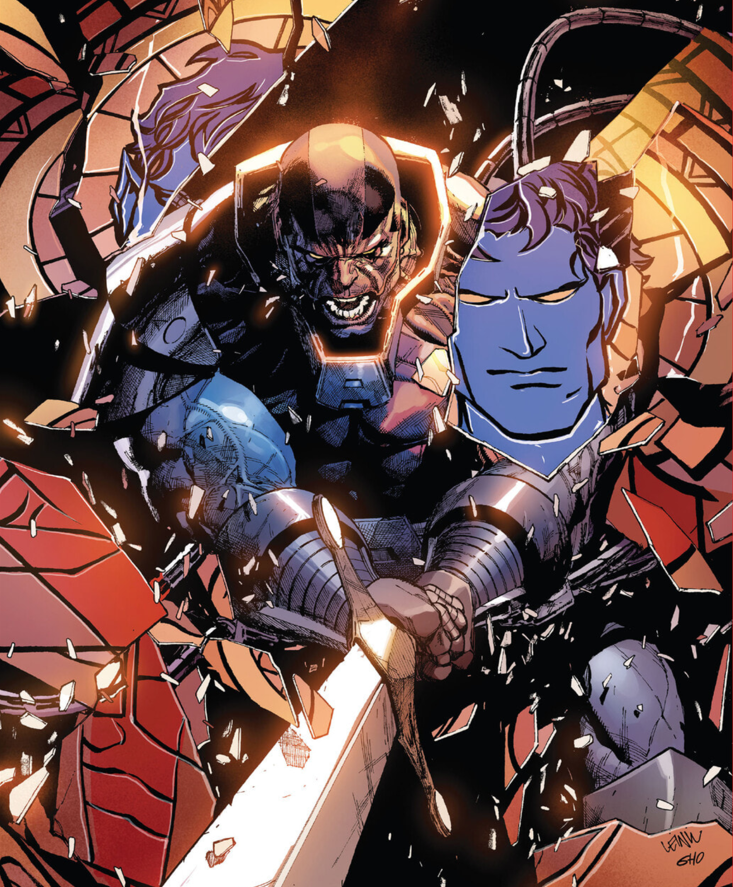 Teased with a typically beautiful yet ominous Leinil Francis Yu cover, X-Men #7 set expectations high for raising the bar on internal Krakoan tensions—and the story delivered, along with many burning questions that mostly still haven’t been answered. We start with a literally iconoclastic image of a stained-glass version of the most famous Catholic mutant—Nightcrawler—shattered by Apocalypse wielding a sword (which seemed to both echo what we’d seen recently in flashbacks, of Apocalypse’s last stand on ancient Okkara, and call forward to the impending X of Swords event).

What’s most clear by issue’s end is that Kurt’s doubts and questions, even his spiritual vision of renewal, just don’t carry the day, at all. They certainly fueled readers’ hopes for more Kurt content, but it’s Apocalypse and the less humane elements on the Quiet Council—meaning, most of it, then—who win out here, thus allowing the Krakoan project to grow at a more rapid pace, driving up reader enthusiasm, as well. So, yeah, cynicism wins, as usual. At least Hickman’s being honest! 😉

END_OF_DOCUMENT_TOKEN_TO_BE_REPLACED

The first thing we must address regarding Heroes in Crisis

is that it is a ruin. It’s a six issue miniseries stretched out into nine issues, and it shows. There are several points in the narrative where it’s clear that the wheels are spinning, everyone’s just waiting to get to the bit where Wally West confesses everything. I’m tempted to argue that the series would have been better suited for a more Columbo-esque structure where the reader is aware of who did it and the rest of the series is spent finding out why, rather than having that why provided over the course of an issue long monologue.

But, as with all ruins, what doesn’t work, what caused the ruin, is often the least interesting part. What’s more interesting, however, is what a ruin can show us. What we can find within the ruin that shows us what it could have been. Not that it was secretly good (though I’m quite aware that some are invested in that project), but rather what hidden depths can be found by taking what’s there seriously. END_OF_DOCUMENT_TOKEN_TO_BE_REPLACED