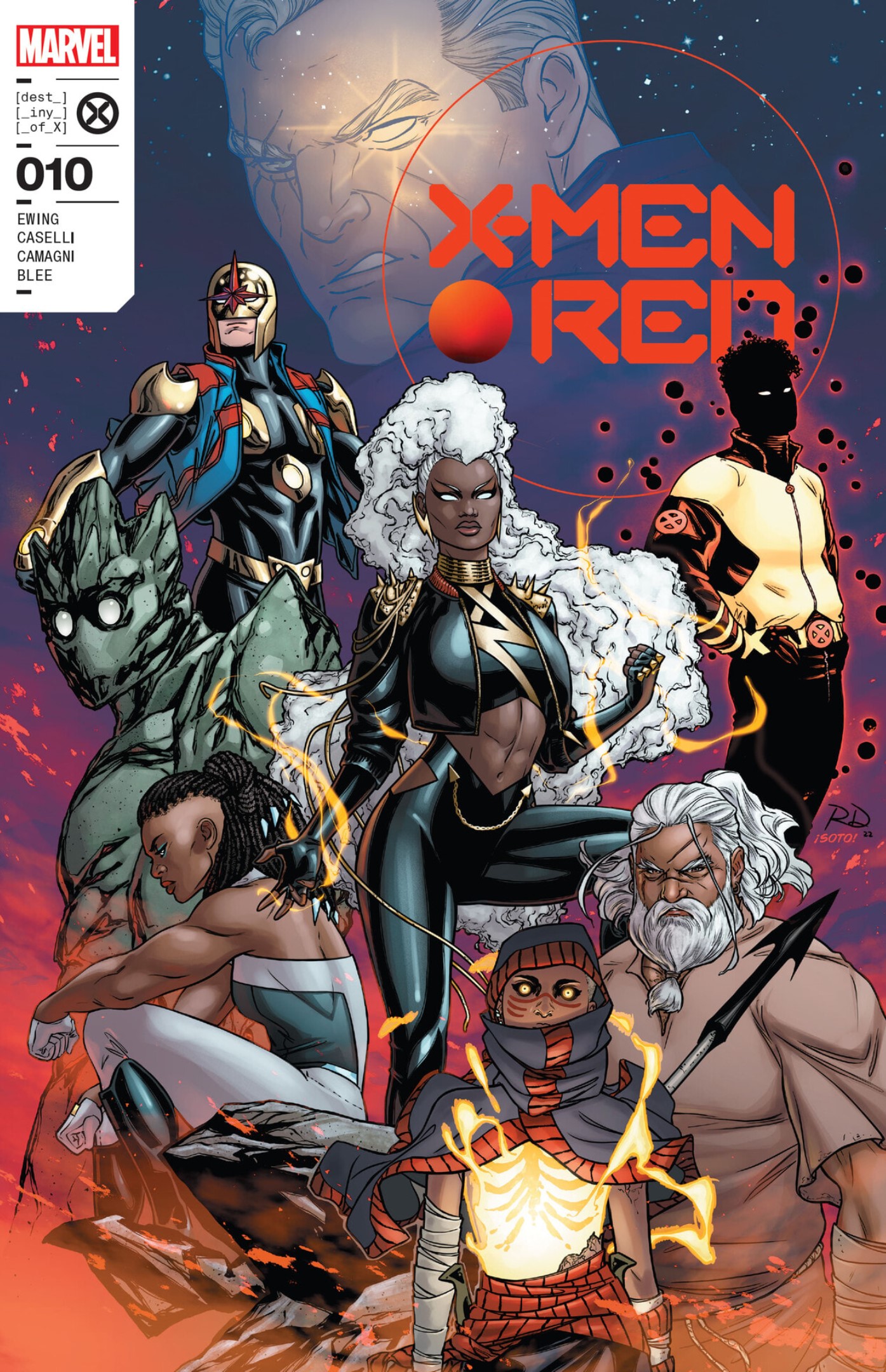 Called it! (Well, if you can call my cryptic parenthetical suggestion at the top of our last X-Men: Red review calling it—since who wants to spoil a nasty fun surprise, right?) Orbis’ “sinister” nature wasn’t too surprising given the mystery surrounding his Earthly origins. It was perfectly in line with all the suspense around revealing the whereabouts of the two other Essex “suits,” as it were (after the reveal of Dr. Stasis as a kind of Essex of Clubs).

Now we’ve got the Essex of Spades revealed beneath that golden geodesic, looking the worse for wear, we’re just missing a sinister Hearts (Yes, I know—there’s only one Sinister! A whole system of them. Apparently, the others haven’t gone as far in becoming a sadistic aristocratic virus nostalgic for bloodless Victoriana).

The title, “The New Age,” taken from the verse of Lodus Logos on the opening page, resonates most with the speech from Sobunar at the end, speaking to a paradigm shift among the Arakkii, toward a society of mutual aid and empowerment through egalitarian fellowship.

Those verses from Arakko’s poet laureate that open the issue—well, Arakko’s never had much leisure time for developing into anything resembling a cultural dynamo. Or perhaps the actual author of this poem is simply a much stronger storyteller. Logos’ lines might resemble something like epic poetry, but that’s a daunting task for a modern-day writer to pull off. It could be that Arakkii verse has yet to find its footing in translation (into a global language that has almost entirely lost its own sense of that mode of primeval epic). Certainly, a poet declaring “Were you there? I was there! / If you were there / You’d need no telling” doesn’t exactly shore up the poet’s stature as language-maker, unless there’s some larger irony the translator hasn’t translated for us.

The two narrative strands we left off with last time—Vulcan attacking the Diplomatic Zone and then confronting Storm in the Autumn Palace; and Cable and co. getting tripped up on their interstellar raid of the Progenitor’s World Farm, secretly Orbis Stellaris’ HQ—don’t converge, but each does wrap up nicely—with not a moment to spare, just in time for “Sins of Sinister” kicking off at the end of January.

Back on Arakko, tracking across slagged swathes of it as Vulcan pummels Storm with his fire, to no avail, he makes the dubious argument that he’s got the upper hand since she’s pledged herself not to resurrect. As if Krakoa is going to be resurrecting Gabe after this epic temper tantrum (Not that he’ll even get that option as we’ll see)!

Up on the Keep above Arakko, Abigail realizes her one remaining Krakoan ally Mentallo has all along played double agent—no surprise there! From his perspective, she was certainly no longer MVP material, but it is a nice surprise to see who the higher bidder is: Sunspot! Who once bought and repurposed A.I.M. Again, this is unsurprising, but there’s a fine inevitability to all this, and it’s a Krakoa-era culmination of Ewing’s celebration of our coolly calculating playboy who likes to play so dumb and fun that his enemies never see him coming until his checkmate move (Mentallo’s low-level psi power allowed him to act as relay for Xandra, who shielded Brand from seeing what her surveillance tech did show her: The Autumn Palace was not empty; Storm was right in front of her all along).

And here’s a background Mentallo-Sunspot connection: Flumm worked for the A.I.M.-ruled Barbuda during Secret Avengers vol 2, though he didn’t seem to be around for Bobby’s island coup—but maybe he was still on the payroll?

Brand’s rationalizations for dirty dealing don’t win her any sympathy, not even among hard-nosed Arakkii who might agree on the perils of strong neighbors—but they, significantly, are in the process of really changing their ways, as we see further nods toward that this issue from Sobunar and Lodus.

Unsurprisingly, though, the wily Abigail escapes—using a nice surprise, Cable’s own “bodyslide” tech (which she lifted from Kid Cable back in Ewing’s S.W.O.R.D.). Also surprising is that when she bodyslides “somewhere very secret,” the Fisher King is already there, just chilling, waiting to deliver her a dire warning: 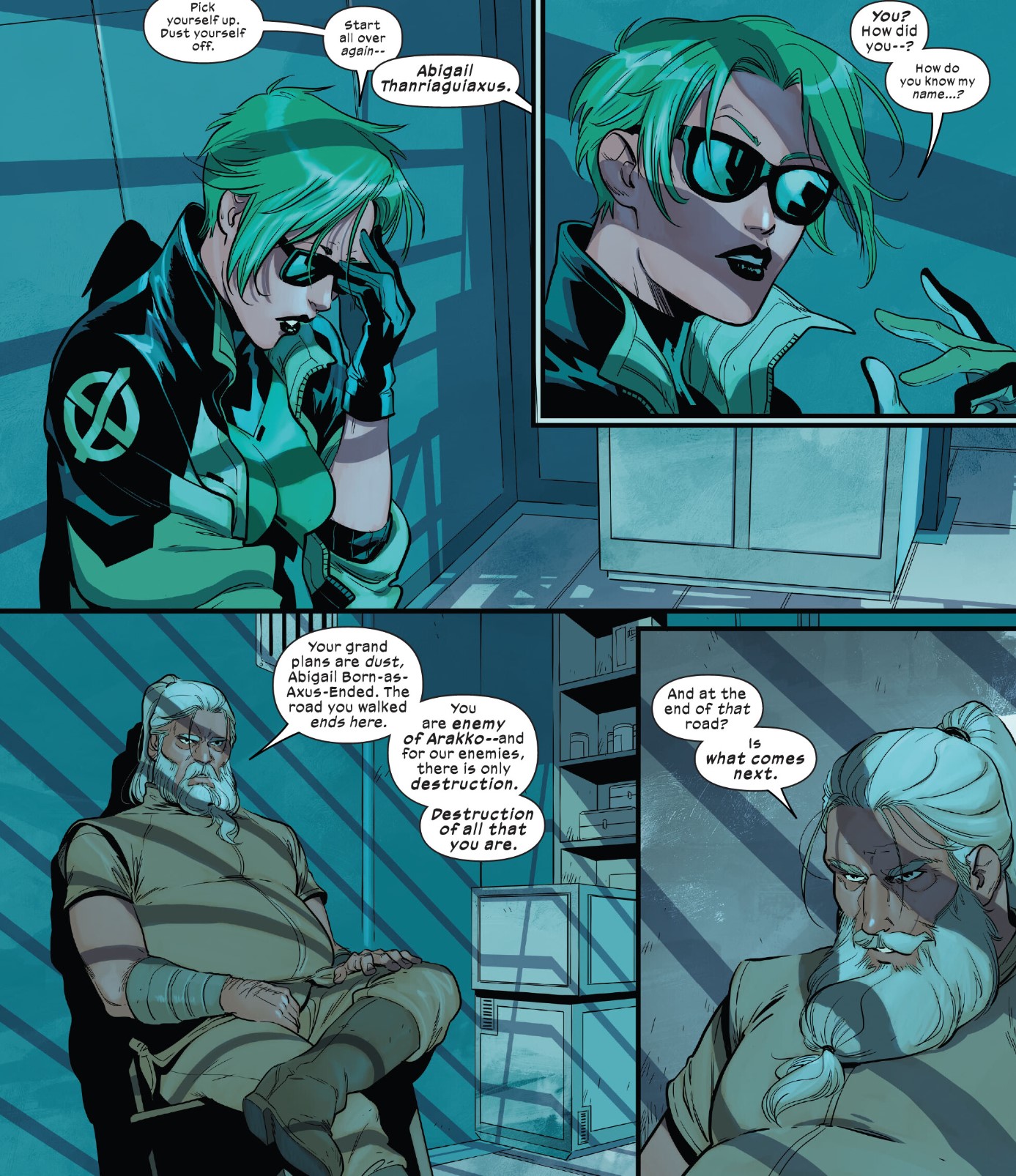 What’s exciting here is that there’s something totally unexpected in store for Brand. She has every reason to now be terrified—though, who knows, perhaps if she survives, she’ll become a better version herself? Well, at the moment, I’d put her hopes for this at the same level as her skeezy black-ops boyfriend. Also surprising is the Fisher King’s knowledge and mentioning of her true surname: Thanriaguiaxus. The last bit, “Axus,” is the name of her homeworld, also new info, though she referred to the place back in S.W.O.R.D. #11. The name isn’t out of nowhere, however: Her half-brother was introduced way back in the debut issue of the first S.W.O.R.D. volume (2009): Lothithanriaxiaxus (with a mouthful like that, it’s no wonder he hasn’t reappeared).

Down on Arakko, Storm has allowed Vulcan to start exhausting himself while leading him into a trap laid by herself and her friends: 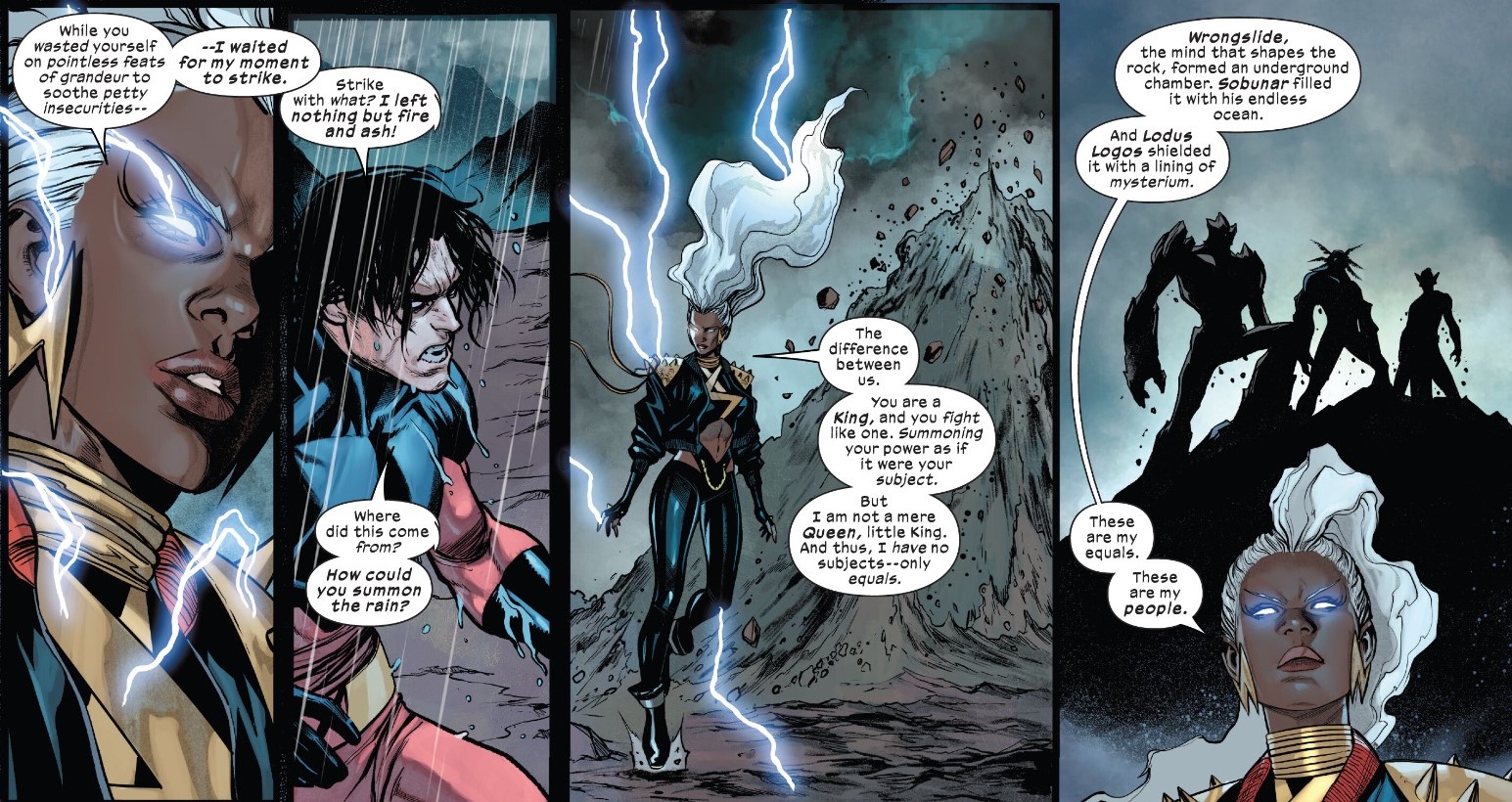 Lodus provides the finishing touch with “a mysterium throne” encasing Vulcan—so that while he lives, he’s no longer a threat to anyone. It is here that Sobunar affirms the new path for his people: embracing help, both allowing themselves to receive it from their Krakoan friends and providing it to one another.

Last issue it seemed that the three sinister aliens who had vivisected Vulcan after finding him in the Fault (see the end of “War of Kings” and Hickman’s X-Men #10) were puppets, perhaps even creations, of Orbis Stellaris. This time, we see that they were only barely under his control; he’s freaked out as everyone else that this diabolical trio might now vivisect the cosmically powerful Manifold and thereby undo the universe—which they clearly don’t care for, being from some other reality. 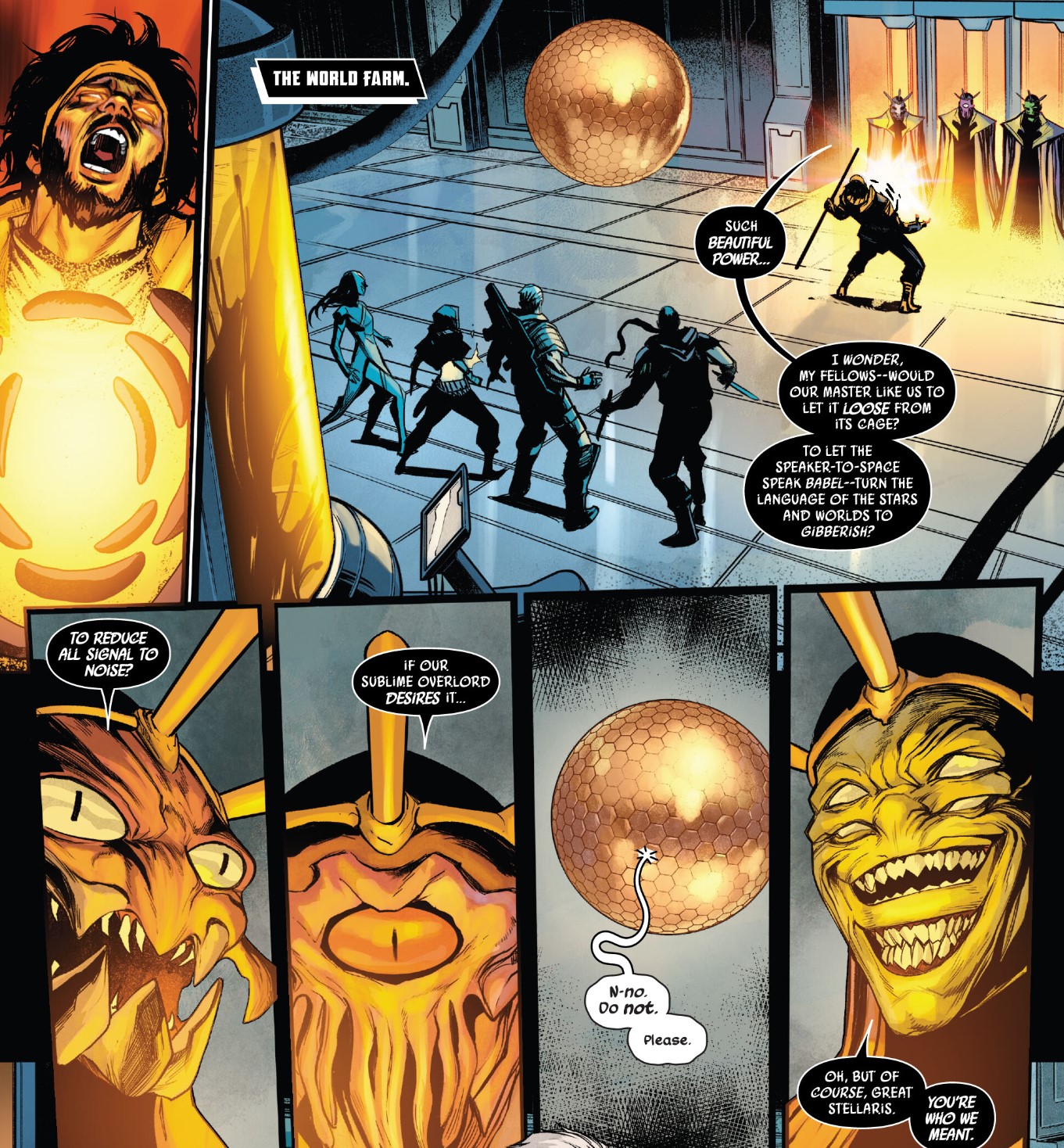 Cable telekinetically draws back the techno-organic virus sample that Orbis stole and tampered with (see issues #2 and 8)—and he goes for a classic ’90s X-Force look with the chunky Liefeldian/anime-style armor. But the freaky aliens are also able to manipulate this “glory of the Phalanx contagion” at a distance, although they themselves don’t appear in any way associated with or infected by the dreaded Phalanx. 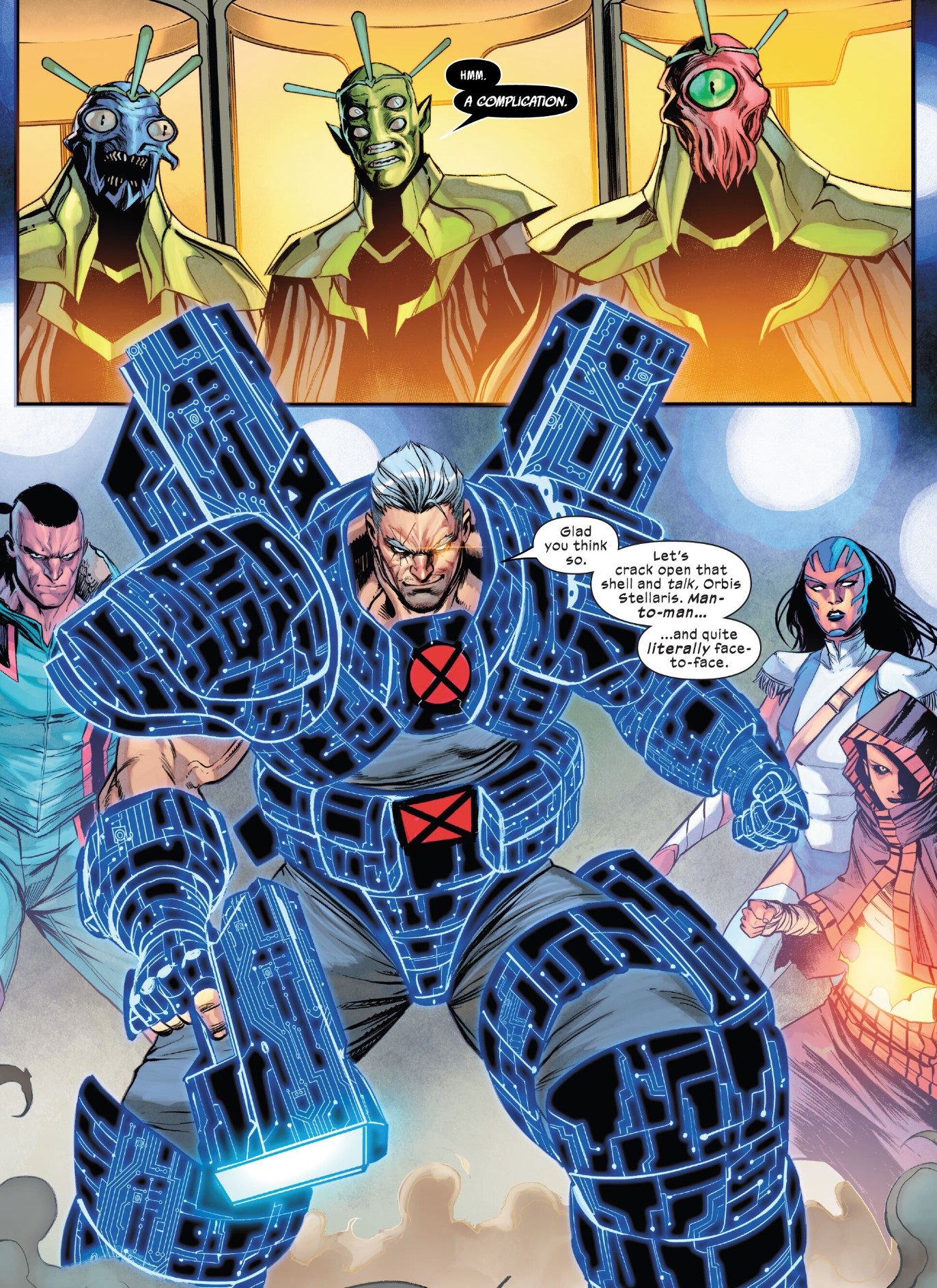 Fortunately, Manifold receives something of a deus an Arakkii omega ex machina in the wandering person of Lactuca, who knows the whereabouts of everything everywhere—quite a power to have on call! He even mentions them sharing a parent*, though perhaps this is just metaphor. Their powers aren’t the same, exactly, but they certainly have cosmic similarities. Lactuca’s presence is enough for Eden to situate himself without having to see the sky or know what the surrounding space looks like with his own eyes. 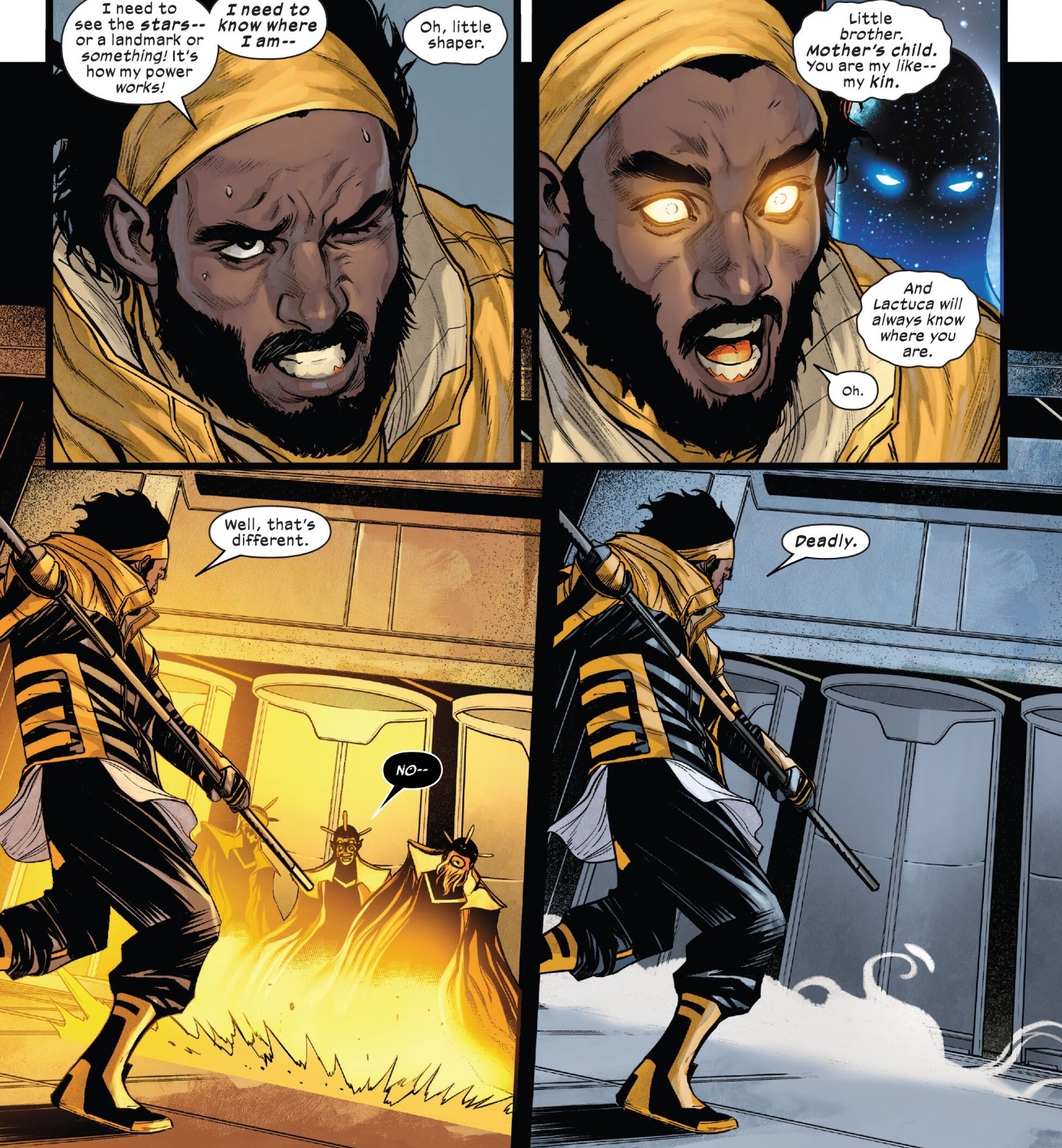 With that, he handily banishes the alien trio, folding them away who knows where: “All the way outside”—which he admits is probably where they’re from. Freaky.

He then manages to “fold” everyone back aboard their ship, which Wiz-Kid is still flying, chased by Progenitors—who destroy the craft and believe all aboard killed, not realizing that Eden’s managed to squirrel them all back home, now that he’s got his bearings (and even though he’s clearly exhausted).

Orbis, clearly not used to being disadvantaged, hasn’t made a good showing of his supposed might since he piloted that headless Progenitor in the previous issue. With his gold ball lodged in a wall, he opens the egg to reveal a sickly and emaciated Nathaniel or Nathan Essex! He’s got a spade tattooed on his brow, so now all we’re missing is the “hearts” Sinister.

Hmmm… Y’all remember Miss Sinister? Well, of course, she wouldn’t make sense as the reveal for “hearts,” but don’t discount the notion that the “hearts” Sinister could be a woman. That would surely rankle the other misogynist Essexes!

And if we look at the reveals so far, we’ve got Doctor Stasis from Duggan’s X-Men and Orbis Stellaris here; meanwhile, Gillen’s Immortal X-Men is Sinister-centric. Now, of the three volumes involved in “Sins of Sinister,” we’re missing a reveal from Legion of X. Ipso facto—“Why is Mother Righteous,” eh?

Of course, Cable and co. had to jump ship before this reveal, but Zsen did manage to use her power (perhaps to her own surprise) to a useful purpose in the field, painting the truth—in this case, of what’s hiding beneath Orbis’ sinister space-opera disco ball. What she retrieves isn’t depicted except through Cable’s report, but if the image of a Victorian steampunk scientist accompanied by playing cards doesn’t connect any dots for him, it certainly will for the Quiet Council (Guess all these Essexes are yet another blank spot in history for the boy from the far future, eh?).

NEXT: Storm and the Brotherhood of Mutants #1!