Following the beginning of Marvel’s Hickman era of X-Men in the Dawn of X and X of Swords event, the X-Men line of comics will move into the Reign of X, what is effectively the second part of life on Krakoa for the mutants.

Reign of X promises an exciting post “Swords” era of X-Men comics, with mutants still living on their Krakoan island nation, but with growing numbers, power, and of course all the problems and villains that arise in the wake.

If you’re looking to get started with this era of X-Men, make sure to check out House of X / Powers of X

before beginning the Reign of X, and again, you’ll likely want to check out portions of the Dawn of X guide linked above for part 1 of this reading order. In the meantime, you can check out my theories and predictions for the Reign of X based on Marvel’s promotional teasers!

The below includes all the same comics as the above Reign of X collected editions, except you can pick and choose which series most interest you.

Children of the Atom by Ayala Vol. 1

Way of X by Spurrier vol. 1 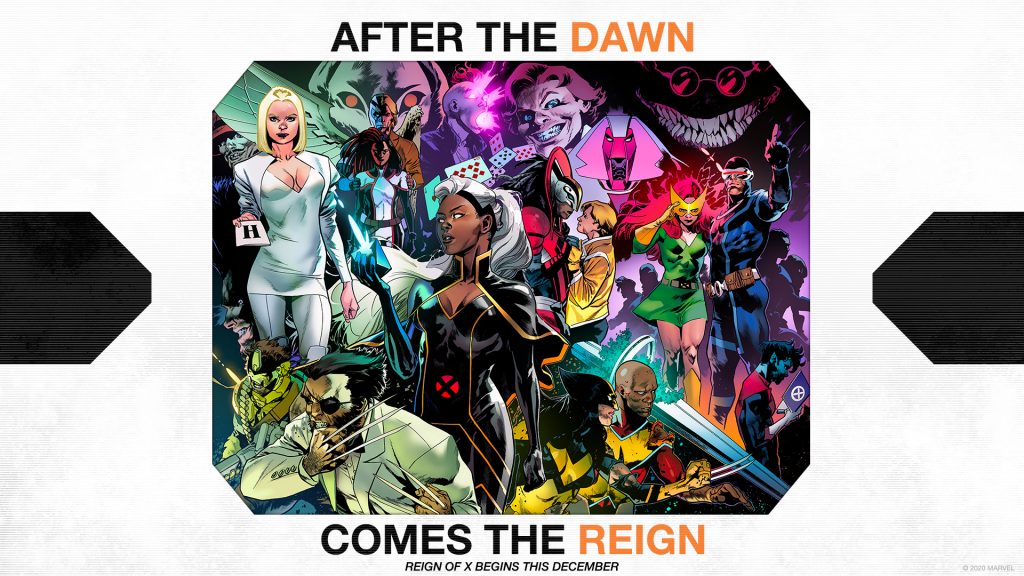 You can find full comic book reviews, analysis, and explanations via the Comic Book Herald Youtube Channel, and my ‘Krakin’ Krakoa’ series covering all things X-Men! Indented comics just means they aren’t part of our regularly scheduled X-Men line (but the stories include mutants!).

While Cable #7 is published well after SWORD debuts, it makes more sense to me to read prior to the King in Black crossovers.

Technically, major members of the X-Men show up in Marvel’s King in Black event. It’s not worth reading for that reason alone, but given SWORD will tie into the event, it’s worth some awareness around what’s going on.

Again, since SWORD is a King in Black tie-in, I’m recommending reading the issue alongside that event, which includes various X-characters (namely Storm!) who are doing all sorts of other things in other books! So my general thinking is let’s fit all of King in Black in here, and then proceed to the rest of the Reign of X, unless specific moments dictate otherwise.

Iceman, Bishop and Callisto all get to play a role in the Gerry Duggan written riff on Conan and Deadpool’s team-up during King in Black!

King in Black: Return of the Valkyries #2 to #4

Wolverine and Pixie show up to take Molly Hayes to Krakoa! The Rainbow Rowell written run is great, and this is a strong crossover.

Storm is present for the main “Intergalactic Empire of Wakanda” storyline written by Ta-Nehisi Coates, but in particular it’s the backup Storm feature by Saint Bodhi X-Fans will want to check out.

Children of the Atom #1

Children of the Atom #2

Includes a handful of short stories set on Krakoa. Inessential but enjoyable for fans of characters like Jean Grey, Marrow, and Emma Frost.

X-Men: Curse of the Man-Thing

This is part 3 of the Steve Orlando written “Curse of the Man-Thing” mini, starring Krakoa’s Quiet Council and Magik and her Dark Riders. Note that the first two parts (Avengers, Spider-Man) don’t include much from mutants, but do include Hordeculture, so there’s some X-relevance!

Children of the Atom #3

This link will take you to a reading order for the full Hellfire Gala crossover! Come back here when you’re done for the continuation of the Reign of X.

Children of the Atom #5

Children of the Atom #6

Non-essential but features a Wolverine cameo

Part of The Last Annihilation crossover!

Available exclusively via Marvel Unlimited. The first four issues are a short Wolverine story by Jonathan Hickman and Declan Shalvey. Inessential, and could be read pretty early in Krakoan continuity if desired. This approximates when the comics were released.

Next: Destiny of X