Will you accept cash, credit, or just all my money?

Jim Starlin’s relationship with Thanos is, to my mind, highly unique in superhero comics. He is as closely defined as THE writer and artist of Thanos as just about any other creator in Marvel history is with any other character. Here’s my off-the-top-of-my-head list of creators who are inextricably tied to a particular character within the Marvel landscape, to the point that other creators tackling the character just feels off:

Jim Starlin – Thanos, Captain Marvel (and would be Adam Warlock if I didn’t like the way Dan Abnett and Andy Lanning handled the character so much in their Guardians of the Galaxy)

Every single other character in the Marvel Universe? They’re community property, handed down from generation to generation as new creators take the story into their custodial care until it’s handed down to the next storyteller. Don’t get me wrong; there are an enormous amount of era defining runs such as Frank Miller’s Daredevil or Grant Morrison’s New X-Men. But you can easily point to other creators submitting great work on those same characters or teams in a way that defies the notion that any one creator or creative team “owns” the character.

Jim Starlin, though? He owns Thanos.

This isn’t necessarily a knock on other creators who have attempted to wield the Mad Titan. I’m a big fan of Thanos in Annihilation, and he’s properly genocidal in Marvel’s recent Infinity event. Nonetheless take a look at Starlin’s Thanos creds deck:

– Created the character, first introducing in Iron Man #55, all the way back in 1973

– Actually had Thanos END THE UNIVERSE and BECOME GOD only to decide it was kind of a bummer in Marvel Universe: The End

All of these epic feats span nearly 30 years, from 1973 to 2004. And here’s the thing: because Starlin doesn’t ACTUALLY own Thanos in reality, he’s been featured doing plenty of odd things like get beat up by Thor or kill his own mom in sexy lingerie. I’ve always wondered what Starlin thought of these other narratives, or if he was even aware, and in Thanos: The Infinity Revelation we have a fascinating glimpse at how Starlin views a Thanos for 2014. The Marvel original graphic novel takes a look at who Thanos really is, who he should really be, and who has been over the course of his Marvel comics career. Most importantly, Thanos: The Infinity Revelation may also set the course for who Thanos WILL be in the Marvel Universe moving forward.

Early on in Infinity Revelation, Thanos reflects upon his recent Marvel exploits, originating both from the mind of Starlin and from writers like Keith Giffen and Jonathan Hickman. It’s a clever bit of biographical exposition mirroring as self-assessment, and the panels reveal the core concept of Infinity Revelation: Thanos soul and sense of purpose is as convoluted a mess as the state of a character passing through the hands of multiple writers and artists over the course of decades.

Starlin questions a great deal of Thanos’ motivations, from his obsession with conquering and controlling Earth (notably seen in Infinity) to Starlin’s own attempt to redeem Thanos in his solo “hero phase.” Intriguingly, Starlin launches Infinity Revelation with a flashback to a seen straight out of Annihilation in which Thanos confronts Drax, seen here chilling with the Guardians of the Galaxy.

There are a few items of note from this early sequence. The first is how well-versed Starlin is in the Marvel Cosmic landscape even when he’s not involved as a creative talent. The second is the subtle shifting of costume and character style from panel to panel. Take a look at Drax who shifts between his more modernized, tattooed version and Starlin’s original caped visage like a common Skrull. This duplicity of character will be a recurring theme throughout Infinity Revelation and it’s one that lends itself to a near infinite amount of reads.

And so it is that Thanos comes to a crossroads, questioning his purpose and sensing a great cosmic imbalance that he knows requires his response. Thanos visits his old favorite, Mistress Death, in order to once more see what quest the Infinity Well has in store for him. It’s during this visit that an enormous revelation occurs: the return of the ever resurrecting Adam Warlock!

The ensuing quest is everything you’d want from a Jim Starlin Thanos Quest, with Thanos and Warlock, the galaxy’s most unlikely pair of companions, working their way through everything from The Annihilators to parallel realities and versions of their powerful selves:

As you’d expect, absolutely no one but Adam Warlock truly has any hope of preventing Thanos from enacting some terrible universal change purely out of curiosity and boredom. This goes doubly true for Ronan the Accuser, erstwhile Annihilator and of Guardians of the Galaxy film fame. If you wondered what it might look like if Josh Brolin’s Thanos took the impetuous “Boy” accuser out for a lesson, Starlin wastes no words in answering:

After this short “spurt of exercise,” Thanos and Warlock continue on to solve the mystery of the Infinity Revelation and the great cosmic imbalance. The sort of cosmic enormity you’d expect from a Jim Starlin Infinity story quickly ensues, with both Warlock and Thanos wielding absolutely immense, universe altering power. Here again we see why Starlin is the true lord of all things Thanos, introducing a stunning full page splash of Planet Thanos!

I won’t spoil any more specifics, other than to say Starlin is truly on his game writing the characters of Thanos and Adam Warlock on an impossibly enormous cosmic scale. Well, that, and alternate reality Adam Warlock’s are absolutely adorable: 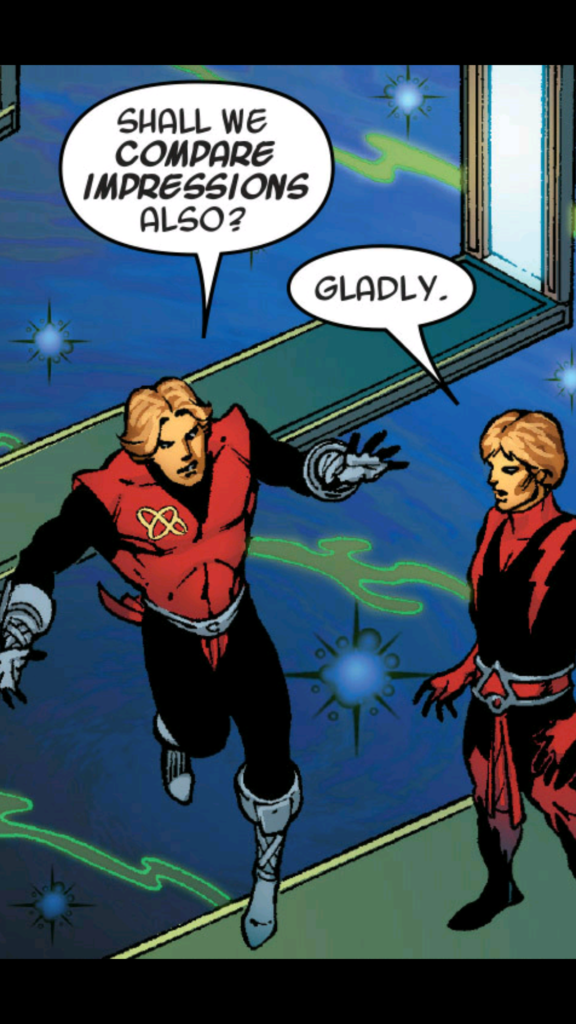 Should I Buy Thanos: The Infinity Revelation

I enjoyed this return to Infinity from Jim Starlin (credit to inker Andy Smith, colorists Frank D’Armata and Rachelle Rosenberg, and letterer Joe Caramagna for a beatiful book as well). I’ve had my share of complaints about Marvel not getting Thanos right this year, so it’s a joy to see the master back at it in Infinity Revelation.

As part of Marvel’s Original Graphic Novel line, Infinity Revelation is a sleek, gorgeous book to own. Even better, Marvel includes digital download codes with all their OGNs, so you can take the book on the go on all your devices very easily. I’ve recently read Frank Miller and Bill Sienkiewicz Elektra: Assassin, so I’m holding out some (perhaps unrealistic) hope that the Marvel OGN’s will begin to strive for similar ambition and brilliance, but as it stands these are enjoyable bite-size morsels. I definitely enjoy Infinity Revelation more than I did Warren Ellis’ Avengers: Endless Wartime, the first of Marvel’s recent OGNs.

The biggest complaint I could level against Infinity Revelation is simply that I’m not totally sure what actually happened. This seems highly intentional, and with any book operating on this level of cosmic star-gazing the details are going to get at least partially trapped in a philosophic labyrinth. Nonetheless, for all the quest, and all the effort to solve the puzzle of being, Thanos and Adam Warlock don’t necessarily come away with many answers. Then again, to expect the meaning of life from Jim Starlin might be asking a bit much. At the very least, we can rest knowing that the cosmic embodiement of Infinity is a bit puzzled as well:

A quick note for newer fans of Thanos. It’s not entirely necessary, but I believe you will be able to enjoy Infinity Revelation more with a passing familiarity to Infinity Gauntlet and modern Marvel Cosmic. Starlin does a great job of seamlessly integrating his book with a long history, but you’ll definitely get the most out of Infinity Revelation if the history is known to you.

So what do you think? Are you happy with Thanos: The Infinity Revelation? Are you interested in checking it out? Do what feels right to you in the comments!