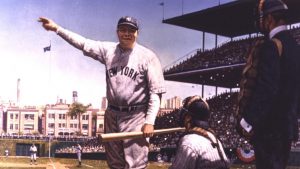 A little more than five years before Superman first saw print, America had already seen his kind of celebrity in Babe Ruth. Like Superman, Ruth wasn’t the first ballplayer (superhero), but in a sense, he created baseball (superhero genre.) He was the stuff of legends. And nothing was more Ruth than when he called his shot in the 1932 series held here in Wrigley Field.

Now, we are here, in an America long past that Game 1, and Action Comics #1. And now, Geoff Johns has called his shot.

A little more than five years ago, Johns revealed in the pages of Justice League: Darkseid War that the Joker didn’t have one real name, but three. This was Johns pointing into the stands, declaring the impossible. I’m going to make a massive change to one of comic’s bedrock dynamics, Joker and Batman. The move seems to say: And even though you know I’m going to do it, you’re going to be amazed when you see it. END_OF_DOCUMENT_TOKEN_TO_BE_REPLACED

There’s a perverse thrill to the Joker. There’s charm in the chaos, comedy in the kills. Whether it’s Mark Hamill’s gleefully sadistic animated rendition, or the Clown Prince copyrighting fish, this is a monster we’ve all wanted to watch for over 80 years.

Even Heath Ledger’s Dark Knight interpretation is humming with electric mystery. I left the theater in 2008 impersonating and quoting Batman’s archenemy. Which is also to give voice to so many people’s greatest fear about Joker directed by Todd Phillips: Joker is a violent madman that still inspires us to smile. END_OF_DOCUMENT_TOKEN_TO_BE_REPLACED

The Joker is the perfect comic villain, with high scores across every conceivable grade. He’s instantly recognizable. He’s the dark reflection of Batman’s psychotic, violent tendencies. Joker’s got range, allowing him to be funny and charming while terrifying others.

Best of all, he never loses track of being terrifying. No one does bad better than him, and the few times he tries to be good? He’s worse.

Here, then, are some of the Joker’s best moments.