In January of 2013 the Guardians of the Galaxy returned to Marvel Comics after an approximate three year hiatus. This is a near eternity in comic book years, and significantly longer than some characters stay deceased (I’m looking at you Human Torch). Nonetheless, after the surprise announcement of an impending 2014 Guardians of the Galaxy movie (the first Marvel Studios film to branch outside the Avengers umbrella), it was only a matter of time until Marvel brought the team of outcasts and rebels back. The biggest question at the time was how the series would compare to Dan Abnett and Andy Lanning’s definitive 25 issue run that came to a (seemingly irrevocable) close in 2010.

(and if you haven’t I highly recommend you check out my guide to Marvel Cosmic and avoid SPOILERS AHEAD!!!)…

…You know that the conclusion to Thanos Imperative left our Guardians without a leader. Richard Rider (Nova) and Peter Quill (Star-Lord) bravely gave their lives to keep Thanos trapped in the Cancerverse. Although this bravery saves the universe, and the Annihilators form an awesome team of cosmic superpowers to fill the protectors of the galaxy role, we’re left without a team of Guardians. Or at least until a Guardians of the Galaxy movie is on the horizon and we suddenly need the gang back together.

Wait, the Guardians of the Galaxy are Just Miracously Reformed?

When you read the first Marvel NOW! point one issue of this series, our de facto first issue, you’ll notice the Guardians are reformed. If you’re a fan of the Abnett & Lanning run, the continued non-explanation of Quill’s presence and the team’s formation will be mildly maddening. Here’s the slight secret – the Guardians of the Galaxy Infinite Comics actually helps a bit with the assembling here.

These issues – digital first releases that utilize the potential of digital comics in unique and intriguing ways – are NOT included in the Guardians of the Galaxy volume one trade collection. They ARE included in Marvel Unlimited. I’d reiterate that the story here is more for understanding the members of the core team, and less on the secret history of Peter Quill being, well, alive. Guardians Infinite #1 featuring Drax and Guardians Infinite #3 featuring Gamora feature Star-Lord with references to the events to come in GoTG. For those of you who’d rather skip straight to issue #0.1, here’s what you need to know.

Bendis and Steve McNiven place particular emphasis on Star-Lord’s origins in their first four issues. It’s hard to know if this was all coordinated, but this coincides with the direction of the Guardians movie, with several references to Peter’s “jackass” alien father hinting at his presence in Guardians of the Galaxy 2.

Even having read the entire Abnett & Lanning, it was initially unclear to me whether there are preexisting references to Star-Lord’s father, J’Son, being king of the Spartax Empire. As it turns out, J’son of Spartax was actually created way back in Marvel Preview #11 by Chris Claremont and John Byrne (two Marvel greats you may have heard of). So even though it’s not entirely a Bendis creation, the focus on J’Son’s imperial role in the galaxy is a brilliant play and allows for both Star-Lord’s familial drama as well as the Marvel NOW Guardians’ secret weapon: the Galactic Council!

I’m a sucker for clandestine meetings of superpowered Marvel characters (hence my love for another Bendis creation: The Illuminati), and the Galactic Council does NOT disappoint. We have the Kree Supreme Intelligence, Gladiator (as Marvel Cosmic readers know, now emperor of the Sh’iar Empire), King J’Son of Spartax, Queen Freyja of Asgard (Odin is… absent) and then rulers of the Badoon, Brood, and Negative Zone. It’s a murderer’s row of cosmic awesome, and the first story arc has the council focused on one objective: keeping their hands off Earth.

Before we get to that point, though, Bendis and McNiven take the #0.1 issue to do a deep dive into the history Peter’s mother, J’Son, and of course young Peter Quill before he’s brought into space. The general concept will ring true with fans of the new movie, but you’ll see that the comic book features distinct differentiating factors. The issue is also a very sweet love story that actually gives us reason to care about J’Son.

The big “Peter goes to space” moment plays out quite differently than the movie as well, although I won’t spoil that twist here. Before that point, we get all the essential Quill development: only child, single mother, can’t keep out of a fight when he sees someone being bullied or treated unfairly. Perhaps, most importantly, he’s a comic book fan just like us:

Not Your Abnett and Lanning’s Guardians

The big reveal at the end of the point one issue is that Tony Stark, aka Iron Man, is planning to join up with our team of Guardians. It’s also revealed that the core team of existing Guardians is the lineup you’ve seen in the movie: Star-Lord, Gamora, Drax the Destroyer, Rocket Raccoon, and Groot.

The addition of Iron Man to the lineup was fairly contentious, but it makes a lot of sense. First off, of course Marvel was going to want to add a recognizable Avengers element to its flagship title as it tested the pre-movie waters. And more importantly, Iron Man on the Guardians actually flows perfectly with Kieron Gillen’s narrative in his Marvel NOW! Iron Man. By the end of that five issue arc, it begins to seem logical for Iron Man to take some time in space. And if he’s going to be in space, why not do it with the Guardians of the Galaxy? 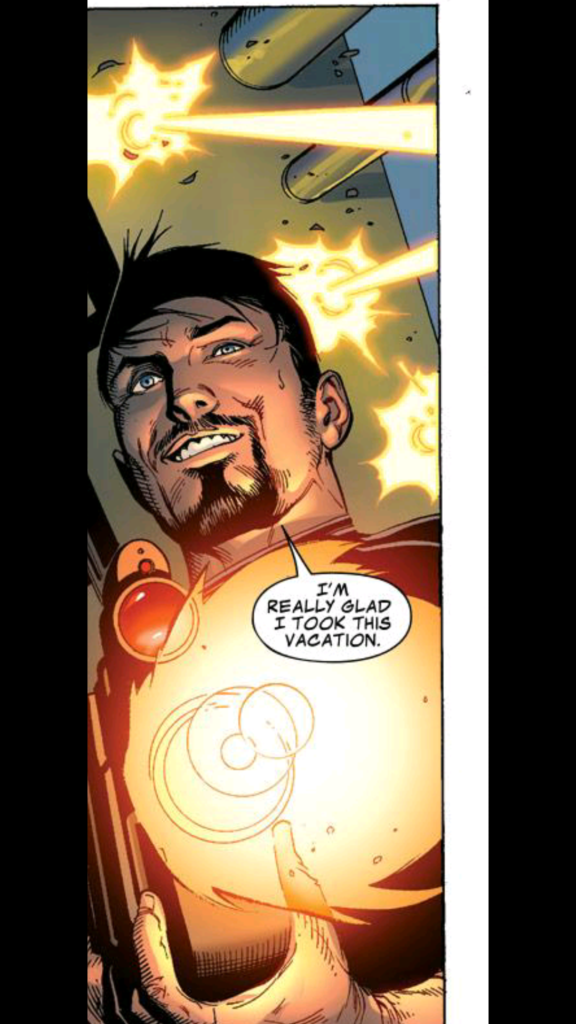 Beyond that, Bendis and Mcniven do a nice job in this first 4 issue story arc of maintaining the look and feel of the Guardians. They find their way into enormous trouble, things go terribly wrong, and somehow they pull their crazy selves from the wreckage to save the day. Drax and Gamora are infinitely badass (characteristic missing in their movie versions), Groot is probably the most essential member of the team, and Rocket is a homicidal maniac with a furry heart of gold.

A lot of fans of the excellent Abnett and Lanning Guardians ran have expressed extreme reservation with this series, and it’s definitely not as purely Marvel Cosmic as that 25 issue run was allowed to be. Personally, though, I’m a fan of this introductory arc, and believe it’s a quality comic series that also prepares readers for the excellent movie now in theaters.

Read on Marvel Unlimited: Guardians of the Galaxy volume 1

The complete Brian Michael Bendis Guardians of the Galaxy