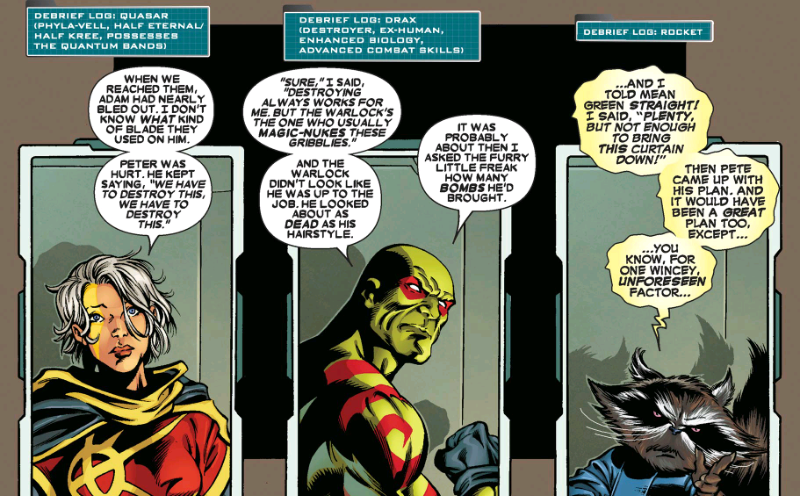 Ask a comics fan where to start with Guardians of the Galaxy, and nine point nine times out of 10 (the point nine lost a few teeth, but don’t worry, hesh jush fine) you’ll hear “Start with the Abnett and Lanning run.”

From the first issue it was clear that Abnett and Lanning’s Guardians, which would ultimately run twenty-five issues (plus The Thanos Imperative event

), had a stylistic and tonal edge that was unmatched. Each issue featured action interspersed with retroactive mission debrief logs, blending post-mission regrets and current mission tension in the confusing temporal swatch that comes with Mantis involved.

More importantly, Abnett and Lanning completely revamped the Guardians of the Galaxy line-up, eschewing the Guardians of 3000 A.D. for a core of Star-Lord, Gamora, Drax the Destroyer, Rocket Raccoon, Groot, Adam Warlock, Mantis, and Quasar (Phyla-Vell). The new lineup allowed the book to carry through on the established character development of the immensely successful Annihilation. and built-in a humor and dysfunction that was never present with the militia space resistance of Guardians 3000 A.D.

That said, re-reading this run on Guardians I was surprised how quickly Abnett & Lanning dive deep into classic Marvel Cosmic references and the original Guardians lineup. Knowledge of Marvel cosmic history really pays off here, with Adam Warlock as more of a main lead than Star-Lord for much of the series. Likewise Jim Starlin’s 1970’s indictment of religion, the Universal Church of Truth, is featured prominently throughout, with frequent references to their past with Warlock.

Most surprisingly to me, classic Guardians history is referenced almost immediately, with an amnesiac Major Victory appearing as early as issue #2, and Starhawk becoming a mysterious villain by issue #3.

I’ve been maintaining in the lead-up to this run on Guardians that classic Guardians was more for Marvel history buffs, but I can see now the value it brings as prerequisite reading to fully enjoying the 2008 Guardians of the Galaxy. Having read 50 issues of the Guardians series from 1990 to 1994, the sight of a frozen Major Victory, or a mysterious gender-bending Starhawk infiltrating Knowhere raises significantly more detailed questions than my original “Who the heck is that?” 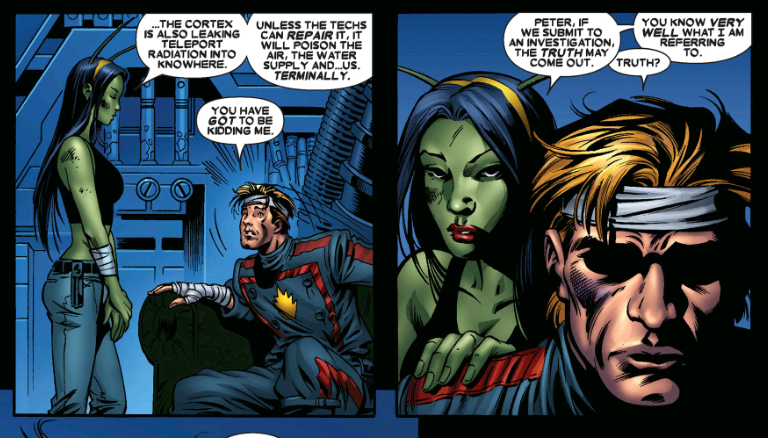 Marvel Cinematic Universe fans may also be surprised to find that Peter Quill is more of a Nick Fury or Maxwell Lord style leader with dark secrets and extremely flexible ethics. The Chris Pratt Star-Lord is a fun-loving quasi-criminal, but 2008 Guardians Quill is a war-worn veteran, carrying heavy guilt for his role in allowing the Annihilation Conquest to get as far as it did. Even through this complexity, Star-Lord is cracking jokes (leading to Gamora’s scathingly angry “You’re not nearly as funny as you think you are”) but he’s far from the light-hearted leader of 2014’s surprise smash movie.

Through its 25 issues, Guardians is consistently caught up in event tie-ins, yet rarely lags because of it. Guardians launches into Secret Invasion tie-ins almost immediately, with issues #4 to #6, yet the series actually benefits with logical cosmic connections to the Earth-bound event. Likewise, Guardians becomes so integral to the Marvel Cosmic landscape that it’s a core player in both War of Kings and Realm of Kings, before finally concluding the era with Thanos Imperative

In short, this is the Guardians of the Galaxy pick for comic book fans, and for good reason.

Absolutely. The Guardians runs to come are more connected tonally to the movie, but this is the prototype that would inspire the style, humor, and lineup of the MCU’s Guardians of the Galaxy.

Guardians of the Galaxy by Abnett & Lanning: The Complete Collection Vol. 1

Guardians of the Galaxy by Abnett & Lanning: The Complete Collection Vol. 2

Again, you don’t have to, but if you want to fully enjoy this period of modern Marvel Cosmic and the build-up that gets us to Guardians, I recommend the following reading order:

Secret Invasion – Includes Guardians of the Galaxy #4 to #6 as tie-ins (you really don’t have to read the entire Secret Invasion to understand, but it’s an option)

Gorilla Man and Bison savaging the Guardians of the Galaxy and Star-Lord names. And again, this is coming from Gorilla Man (human head, gorilla body) and Bison (Bison head… also bison body?). 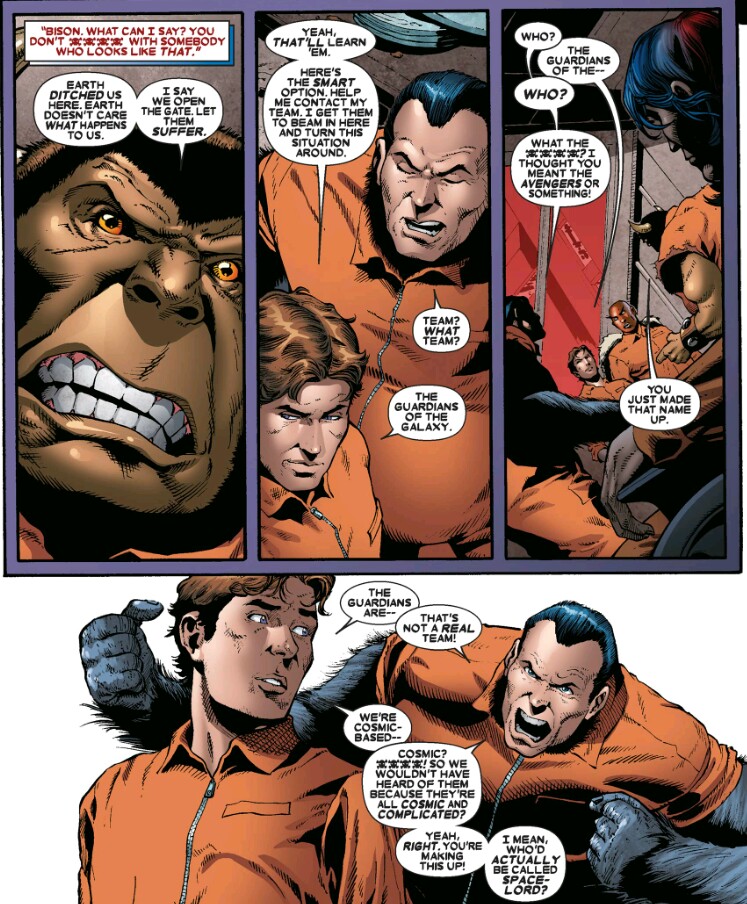 The excellence of Abnett & Lanning’s Guardians of the Galaxy solidified the 2000’s era of Marvel Cosmic as one of the absolute highpoints of Marvel Comics in the millennium.

Likewise, there’s simply no chance in Knowhere that Marvel Studios greenlights Guardians of the Galaxy as their MCU intro to Marvel Cosmic without this comic. We’ll be seeing its influence on screen for years to come.

The Marvel NOW! Guardians of the Galaxy by Brian Michael Bendis.