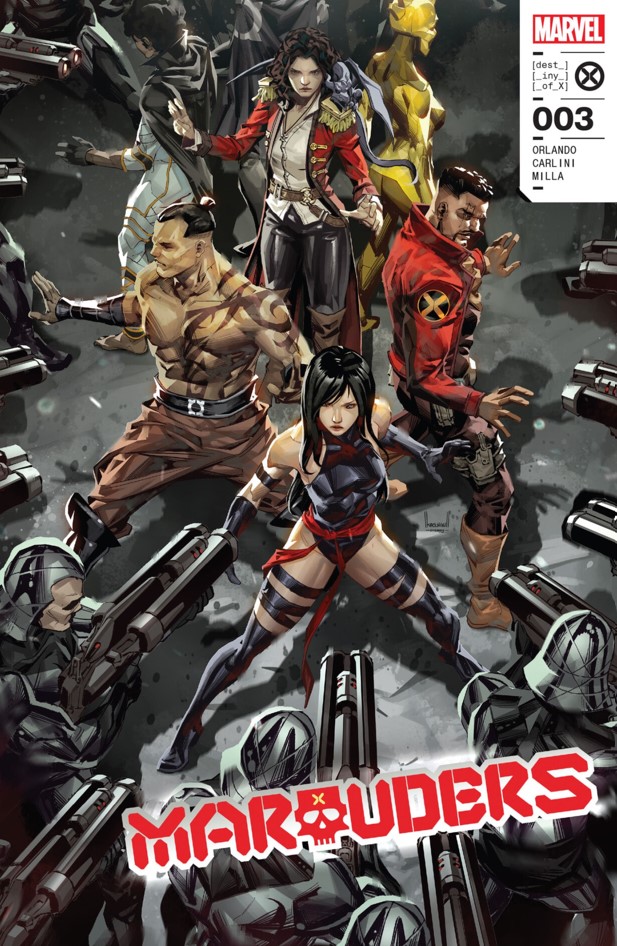 Three issues, Steve Orlando and Eleonora Carlini’s new Marauders title still promises to be fun, colorful and breathlessly action-packed. Much mystery remains, though how much that mysteriousness proves relevant beyond the pages of Marauders isn’t clear. Orlando delights in the obscurest pulls and references from X-Men lore, and that’s catnip to deep Marvel heads—but could this also be distracting us from the lack of gravity to the story so far, or maybe detracting from the story’s broader potential relevance? Regardless, this series feels like it’s shaping up to be a fresh take on Krakoan era adventure, a freshness that is otherwise sorely lacking elsewhere in the franchise. So far, this is quite a good comic, though it doesn’t have the heft and epic scope of Immortal X-Men and X-Men: Red, nor does it involve and provoke like Sabretooth, and it doesn’t promise the earnestly thoughtful and long overdue character reconstruction of beloved characters that New Mutants is doing for longtime fan faves who’ve been dealt too many bad hands.

All the same, Marauders is far ahead of the other books—all of them, notably, by writers who have been with Krakoa since the beginning. I’m not going to argue that all would be better if Hickman hadn’t left, because that’s a counterfactual we’ll just never know the answer to, except that he wanted to leave, so he did. Where we are now, it’s just a telling observation that following Hickman’s departure, the Krakoan narrative has drastically loosened, is maybe in a transitional period of restructuring, and the storytellers who appear most ready to strongly define the franchise and carry it forward are all taking their first swings.

It could be that in a few months, as this newest stage of this new era—the Destiny of X—takes clearer shape, we’ll find all the X books equally fresh and exciting. This is probably magical thinking. Still, it will at least be interesting to see how the various creative teams grapple with Hickman’s legacy and the perennial dilemmas of this wonderful but ridiculously unwieldy franchise. One big question is: Exactly what kind of X-Men story do these writers want to tell? Hickman undid the franchise’s evermore embarrassing narrative disarray with the hardest reset possible without a complete reboot. A move so radical wouldn’t seem to be an option for the current writers. Chris Claremont, Grant Morrison and a few others remain clear inspirations, but those earlier creators had so much more runway, it’s hard to see how the status quo won’t soon fall back into a too-familiar pattern of hectic muddling through—now with Disney gatekeeping.

END_OF_DOCUMENT_TOKEN_TO_BE_REPLACED 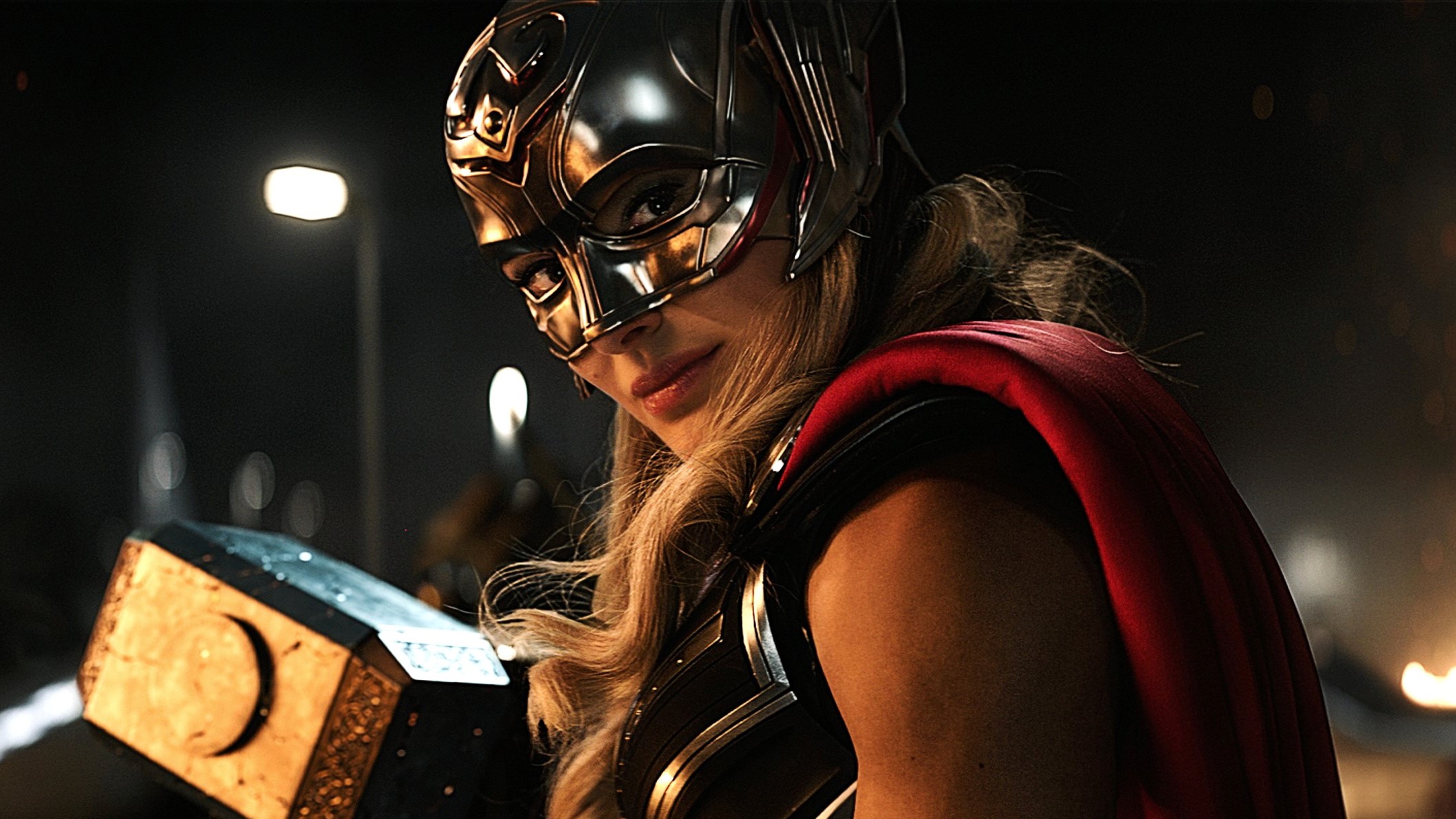 Natalie Portman’s Jane Foster returns to the MCU this summer in Thor: Love and Thunder—as the Mighty Thor, no less! And, with the arrival of this movie, just like in 2014 when Jane became Thor in the comics, you’ll probably see a ton of retrospectives about Jane that go a little something like “Jason Aaron saved this Silver Age character from obscurity, turning a forgotten damsel in distress into one of Marvel’s most iconic heroes.” And they’ll be mostly right—about the latter part! In truth, we shouldn’t minimize Jane’s long comic history to only the early days, when her only purpose really was pining for Thor and getting kidnapped by villains. Granted, this erroneous view of Jane is popular for good reason: she’d never been the protagonist of her own story until 2014, and her best stories—without exception—have been told since. So, to be clear, my purpose here isn’t to uncover hidden gems but to contextualize how Jane Foster became what she is now, and how Jason Aaron didn’t so much reinvent her as he did advance her into the next logical step. Even with sixty years worth of scattered stories through so many different creators, very few of whom were concerned about Jane’s legacy, a clear picture still emerges if you know where she’ll end up. END_OF_DOCUMENT_TOKEN_TO_BE_REPLACED 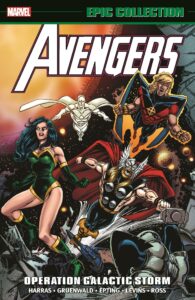 While the “Big Three” of the Avengers – Captain America, Thor, and Iron Man – had been at least tangentially associated with the main Avengers title for decades, in the early 90s those connections were leaned on more heavily as part of this sales approach. In 1985, a second Avengers book, West Coast Avengers (later renamed Avengers West Coast to ensure it was shelved next to its sister title), launched. By 1992, those two series, along with the Big Three’s solo books and new series featuring Wonder Man (from Avengers West Coast) and Quasar (from the East coast team) formed a family of Avengers title, and with “Operation: Galactic Storm,” they all participated in one massive, interconnected story for the first time. END_OF_DOCUMENT_TOKEN_TO_BE_REPLACED 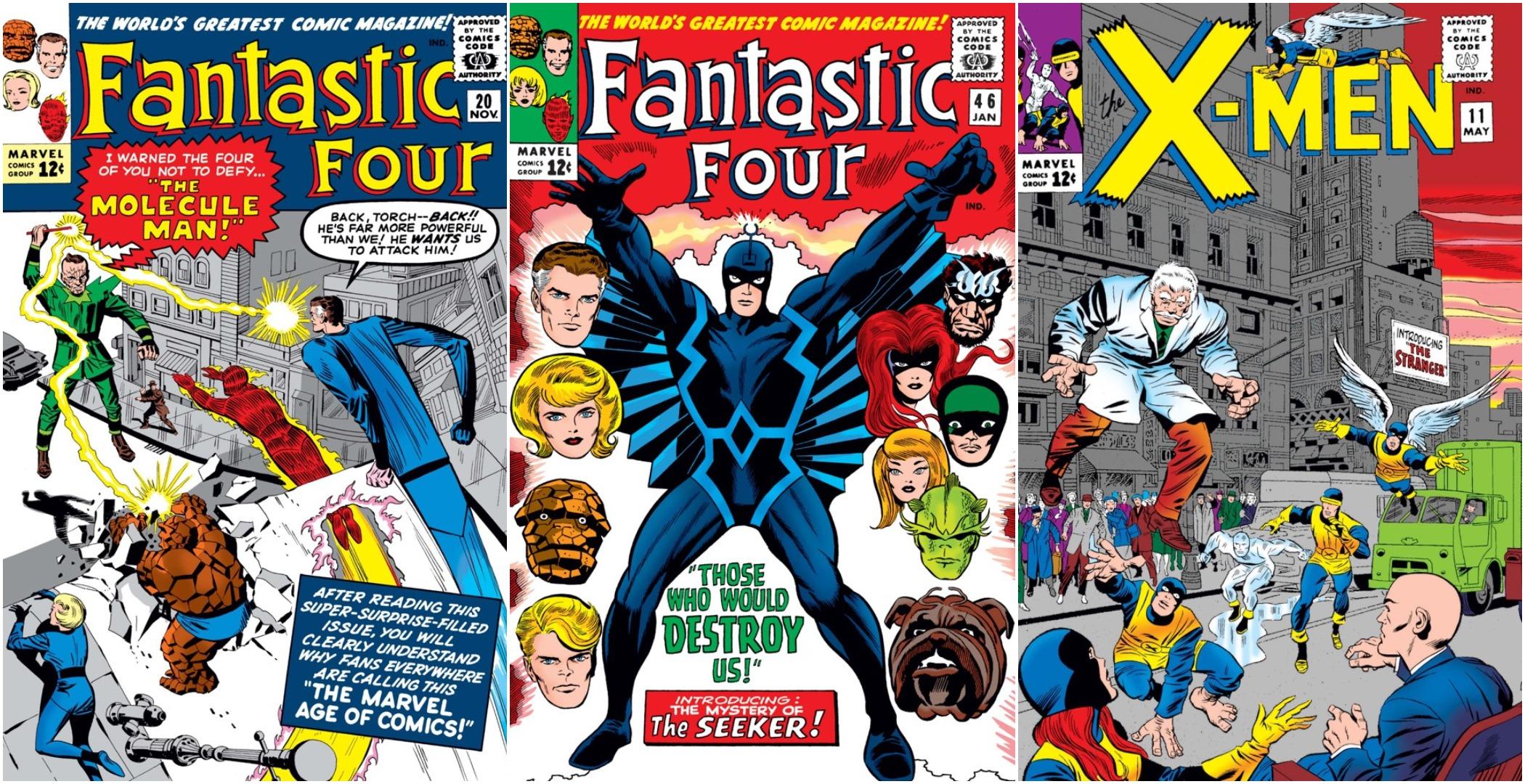 There’s no doubt that with the arrival of Galactus eager to feast upon our Earthly life energies or whatever in Fantastic Four #48-50, Stan Lee and, in particular, Jack Kirby finally opened up a whole new vista of storytelling within the nascent Marvel Universe. The invigorating potential for Kirby’s genius particularly unlocked not just the best Fantastic Four stories to come but also the King’s streak of cosmic epics in Thor, which maybe wouldn’t be surprising to Thor readers of the past decade. These two early titles are really where, post-FF #48, virtually everything about what we think of as Marvel Cosmic was first conceived.

The only major cosmic players to appear almost fully realized before Galactus were the Watcher and Super-Skrull. The Skrulls themselves, however, Stan and Jack weren’t quite sure how to depict, although their subsequent appearances over the first few years after their debut in FF #2 were far in advance of their original almost embarrassingly goofy conception. If not for their useful native shape-shifting abilities, they would’ve certainly gone the way of the vast majority of Marvel’s early one-off alien species.

Instead of the typical ignominious fate of many an early Marvel alien species, the Skrulls returned with increasingly sophisticated visual embellishment courtesy of Jack Kirby as he was really coming into his own as the King of this fledgling medium. END_OF_DOCUMENT_TOKEN_TO_BE_REPLACED

That’s the real war, isn’t it? Ensuring you’re on the winning side?

After decades of struggle, the Mutant race has achieved utopia, and built an empire that spans the galaxy. Together, they have transcended scarcity, disease, and death itself. But what is the true cost of this paradise? And what becomes of it when the many secrets, compromises, and hidden agendas that built it are finally brought into the light?

Brought to life by Valerio Schiti, Stefano Caselli, David Curiel, RB Silva, and Tom Muller, 2022’s Inferno is so much more than a crossover. It’s the ending to a saga that writer Jonathan Hickman began in the pages of House of X and Powers of X, transforming the X-Men, their world, and the Mutant metaphor behind it all. While the “Krakoan era” would encompass every title and creative team on the x-line of comics it would all be in service of Hickman’s vision for the title, uniting Mutants, both good and evil, in a desperate mission to stave off extinction and build a sanctuary for the species.

“I think what happened after Grant and Frank did their thing is that you got that version of the X-Men and then there’s been this nostalgic version of the X-Men…Playing the old hits kind of stuff,” muses the writer. “And those two things have been fighting with each other, probably since that run. You don’t want to do archaeology or nostalgia tropes. My job is to do new stuff with it, and launch us into a newer age of X-Men.”

As each new corner of this sanctuary is explored, Hickman and his collaborators craft a larger picture across the line, putting the nation of Krakoa on a path that would end in its ultimate reckoning. While a number of factors influenced the event’s production, including top-down editorial decisions from Marvel Comics and input from the other creatives on the line, Inferno is the definitive end of Hickman’s vision for the X-Men, as countless threats spark back into being, threatening to burn down everything the Mutants have built. After years of storytelling, Inferno delivers what would become Hickman’s legacy for X-Men: one last trial by fire for the Mutant race.