So far, every chapter on the X of Swords event has been related to one of the 22 Major Arcana cards from a tarot deck. Hellions #5, is no exception, as it corresponds with card number #5 The Hierophant. 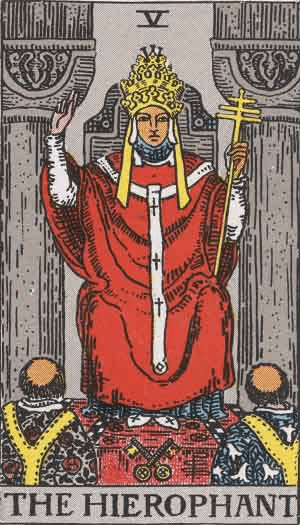 The Fool was expectant for what’s coming, The Magician became a self-conscious individual, The High Priestess took the time to know herself, The Empress used that knowledge to express and create, The Emperor sought to conquer through his action, and now The Hierophant has to learn the rules of the game. This is a card of tradition, established ideas, organization and institutions.

The Quiet Council is the body designed to guide the Krakoan nation and its inhabitants towards the goal of mutants working as one. Their government is not democratic, but each member represents an idea or philosophy regarding mutantkind and what their role as a species in the world should be. Some, like Charles and his students, think humans and mutants can work together, while others like Sebastian Shaw see mutants as a tool to gain economic power. Emma, to me, has an interesting view on the matter, because she wants to defeat the system (the same one represented by the Hierophant) from within.

Each of those positions have existed for a long time now, especially when we take in consideration that some seats on the Council are occupied by ancient mutants, who have acted as mentors or leaders of their people for different generations. The Hierophant on the card is similar to a Pope because in the times the Tarot was created, the church was not only religious, it also acted as a political and military force, much like the Quiet Council. 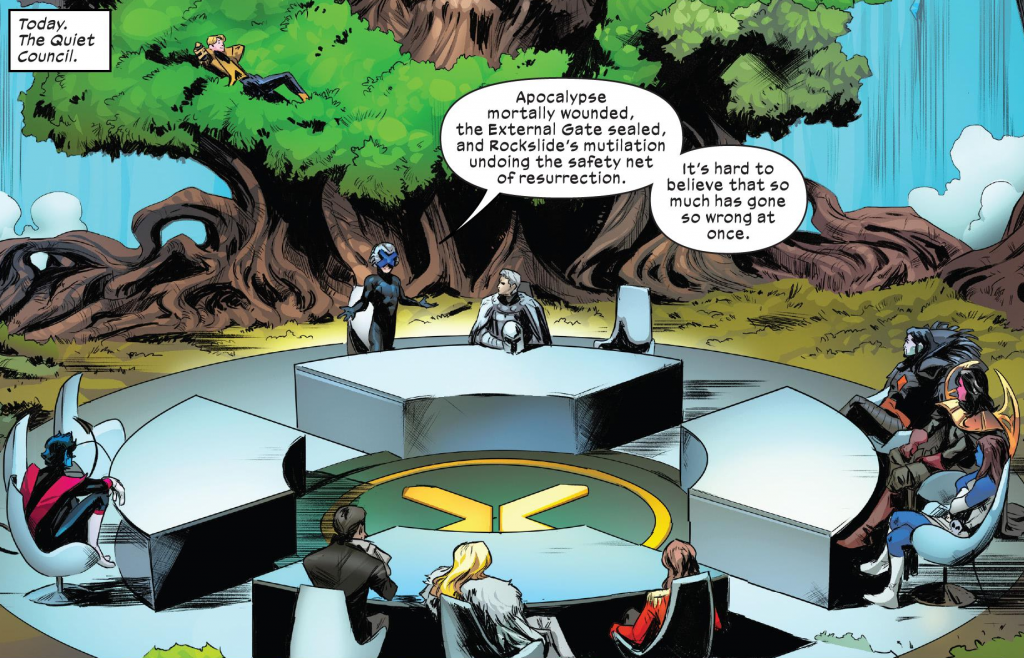 Doug Ramsey and Krakoa also apply to the meaning of the card. The Hierophant is a bridge between Heaven and Earth, deity and humanity, and that’s why the keys stay at his feet. He translates that which is sacred so people can reach closer to God, so to speak, much like Doug is the bridge between the island itself and the Krakoans.

I think that’s also why we see Avalon and Jamie Braddock. They represent a connection between Krakoa and Otherworld. There’s no doubt Apocalypse sat Jamie on the throne as a strategic move, through him, he not only has the means to reach other dimensions and expand the mutants’ dominance, but also to warp reality itself to his desires. Still, Jamie seems to be loyal to Saturnyne and even he doesn’t dare to defy her ruling which is odd, but also goes with the themes of the card.

The two pillars in the card represent the harshness of the Law, and when the card is reversed it could point towards rebellion, a disregard for the rules. The mission proposed by Mr. Sinister goes against the conditions set by Saturnyne, that being the theft of the opposing champions’ swords. Sinister and the Hellions also challenge the previous mandate that no mutant should go to Otherworld through the Avalon gate or other method except for the selected champions. That’s exactly why the executioners of that mission are the most reckless mutant team, the Hellions, along with Mr. Sinister, who as far as I’m concerned, manipulated Magneto to vote on sending him too, in order to be favored in some way from the situation.