Stan Lee, as he so often does, takes credit for coming up with the name “Ms. Marvel.” In 1977’s The Superhero Women, a collection of female-centric Marvel tales, he says that he wanted Marvel to have a signature lead female character; he and Roy Thomas proceeded to come up with the name “Ms. Marvel” for that character. The “Marvel” portion was a nod to the company, of course, and “Ms.”, in Stan’s words, “represented the new, liberated, upbeat spirit that we wanted the strip to represent.” But neither Stan nor Roy Thomas would be involved in the actual creation of Ms. Marvel, the character. That would fall to writer Gerry Conway and artist John Buscema. And while Conway and Buscema are credited as the creators of Ms. Marvel, neither would stick with the character for long. 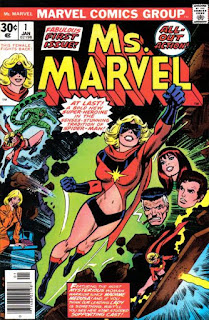 Instead, the creative voice that would most come to define the initial iteration of Ms. Marvel—and, ultimately, guide the character for roughly fifteen years—is Chris Claremont’s. Best known as the definitive X-Men writer, Claremont took over Ms. Marvel’s series from Conway with issue #3 and stayed with it until its somewhat complicated end. In the course of his run on Ms. Marvel, he would define Ms. Marvel as a character, developing an affection for her such that, even after the series concluded, he continued to write her as an occasional supporting player in his X-Men stories, and introduced several characters and concepts that echo louder in comic book history than the events of the series itself. While Ms. Marvel would eventually become the character Stan Lee wanted her to be in terms of her place within the Marvel pantheon, her original series is ultimately more notable for the way it impacted the storylines of the X-Men—and the ways it didn’t—while leaving the actual ascendancy of Ms. Marvel to superstar status for later. END_OF_DOCUMENT_TOKEN_TO_BE_REPLACED

The world seems to slip by so fast these days—hence, why the past decade feels like two decades! (And yes, that’s the usual cliché inverted, because it’s truer!) Somehow, in 2022, it seems like Kamala Khan has always been with us and yet only a little more than eight years have passed since her January 2014 debut. Now obviously, it’s not like she’s there in the comics before 2014’s historic Marvel Now relaunch (not a reboot), but really, so much has been done to assure Marvel readers, especially those who came of age in the 2010s, that this Ms. Marvel, from a Jersey City Pakistani immigrant family and a diverse high school, is even more than just the Peter Parker of her time. Kamala is unique for a star Big Two superhero because whereas most superheroes are sped through what would realistically be their gradual, formative phase, to get them away from their families and their everyday, relatable lives and settings, to launch them into cosmic battles and world-ending dramas, Marvel has from the beginning to the present moment stewarded this character to guarantee that she is what has been all too rare in superhero comics: an authentic in-universe viewpoint for an entire generation of fans, a position she shares perhaps only with Spider-Man Miles Morales. END_OF_DOCUMENT_TOKEN_TO_BE_REPLACED

Kamala Khan is my favorite new character in the Marvel Universe during the Marvel NOW era (2012 to 2015), with creators G. Willow Wilson and Adrian Alphona putting a spin on the Carol Danvers / Captain Marvel legacy and creating a modern teen hero in the style of Peter Parker. END_OF_DOCUMENT_TOKEN_TO_BE_REPLACED

You don’t see nearly as many successful legacy characters in Marvel as you do in DC, but Captain Marvel (and Ms. Marvel) makes for one of Marvel’s strongest progressions through time. You have sevearl separate core characters that have occupied a “Marvel” title over time, and to make matters even more complicated, DC of course has their own Captain Marvel and Marvel Family! END_OF_DOCUMENT_TOKEN_TO_BE_REPLACED

Writer G. Willow Wilson continues to close out Kamala Khan’s first volume by featuring a team-up between Ms. Marvels old and new. Guest-starring Carol Danvers, the duo embark on an impromptu adventure that is as much light-hearted fun as it is emotionally tear-jerking. END_OF_DOCUMENT_TOKEN_TO_BE_REPLACED