Kamala Khan is my favorite new character in the Marvel Universe during the Marvel NOW era (2012 to 2015), with creators G. Willow Wilson and Adrian Alphona putting a spin on the Carol Danvers / Captain Marvel legacy and creating a modern teen hero in the style of Peter Parker.

I originally lumped Kamala into the CBH combo Captain Marvel / Ms. Marvel reading order, but at this point Kamala’s a very big deal! 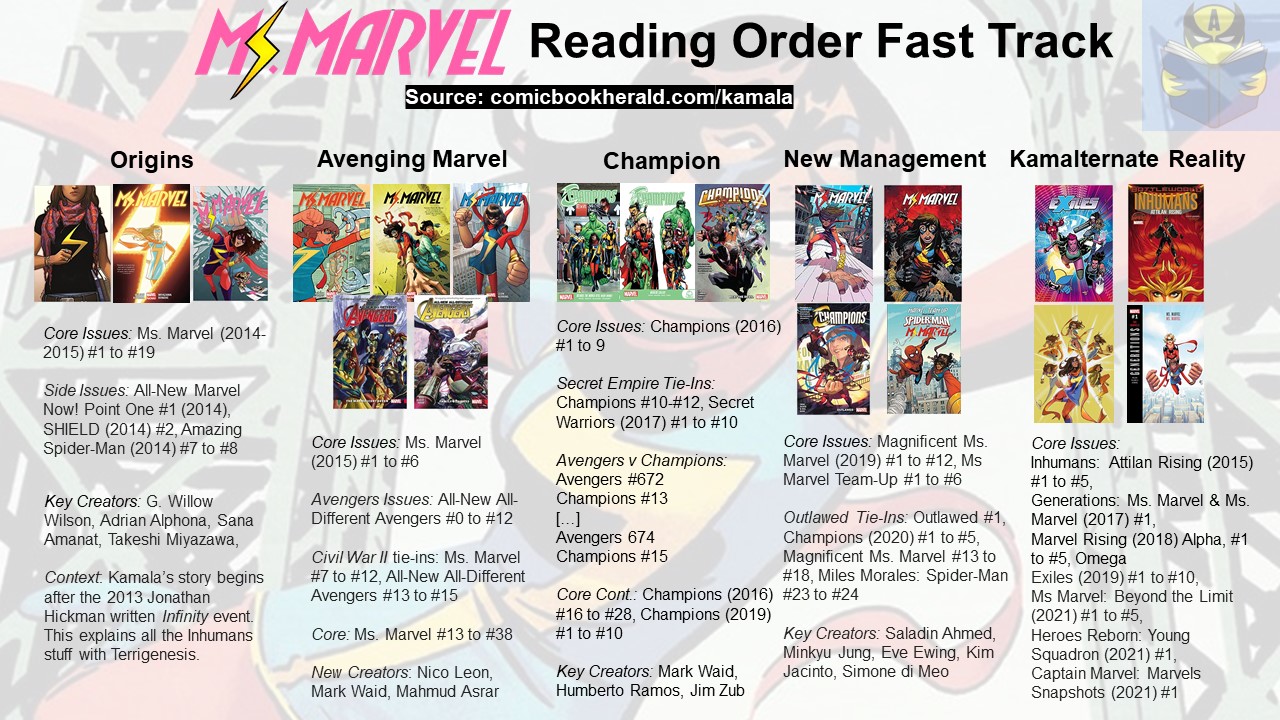 Kamala’s series extends for 19 issues prior to Secret Wars, before Kamala becomes even more integrated in the Marvel Universe on teams like the Avengers and Champions!

It all starts here, folks! The birth of Kamala Khan as Ms. Marvel spins directly out of Jonathan Hickman’s stellar 2013 event Infinity, in which Inhuman king Black Bolt unleashed the Terrigen Bomb, giving birth to an entire new generation of Inhumans.

Although most don’t look back on the Inhumans’ time in the spotlight with rose tinted glasses, Kamala Khan remains, undoubtedly, the greatest addition to the Marvel universe that the Inhumans push brought us.

As an origin story, “No Normal” is as good as it gets. Kamala immediately proves to be a likable and charming protagonist, both in how she’s written in G.W. Wilson’s script, and how she’s rendered by artist extraordinaire Adrian Alphona (seriously, the grumpy faces this girl makes are impossible not to relate to).

This first volume, as well as the entirety of the run by Wilson and Alphona, perfectly hits upon that Spider-Man sweet spot, giving us a hero trying their best to balance school life, family, superheroics, as well as the push and pull of being a Muslim American kid in world with Iron Man and Captain Marvel flying just up above battling invading aliens. 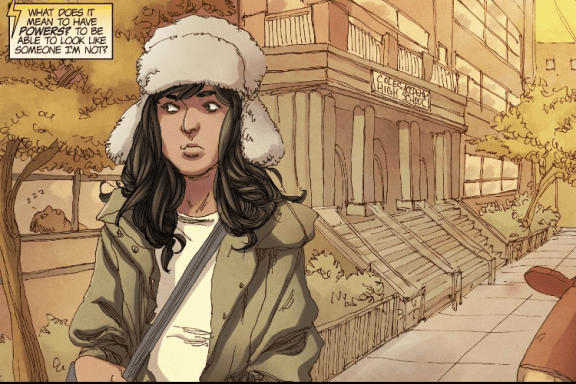 The first four volumes of Ms. Marvel by Wilson and Alphona are near perfect comics, and essential reading for any Marvel comics fan. I include the run on my 100 favorite comics from 1998 to 2015!

The Last Days arc leads directly into Secret Wars (2015), which is my favorite Marvel event of all time. You’ll find Kamala in various Battleworld books, primarily:

Following Secret Wars Kamala is launched into a role as an Avenger. It’s a strange time for the team, half legacy Avengers and half up and coming teenagers. All in all, I find this run pretty disappointing, and expect a better fit for Kamala with the iconic team in the future.

For the full guide check out the Civil War II reading order.

Following Civil War II, the Avenging kiddos like Kamala and Miles Morales decide they need a team that suits their youth movement, and form an all-new Champions.

In what has to be Kamala’s weirdest series to date, Secret Warriors continues out of Secret Empire despite everyone’s best efforts to pretend it never happened.

Reading order for this crossover begins with Avengers #672 and then alternates Champions and Avengers issues until Champions #15.

Champions Vol. 3: Champion for a Day

Exiles Vol. 2: The Trial Of The Exiles

Ms. Marvel remains part of the Champions in Jim Zub’s relaunch. Also featuring some War of the Realms tie-ins!

With art by Minkyu Jung, “Destined” sees a new creative team and new vision for Kamala, as she finds herself going up against new extraterrestrial, body horror-esque threats, and an intergalactic prophecy that paints Ms. Marvel as the savior of an endangered planet.

All the while, Kamala must grapple with the new dynamic of having both of her parents aware of her superhero identity. This new creative direction for Kamala promises an exciting future for the hero, expanding the scope of her world while also upping the stakes of her endless Spider-Man-like interpersonal dramas.

Kamala anchors the revival of a Marvel staple with appearances by Spidey and Carol Danvers!

Ms. Marvel: Beyond the Limit