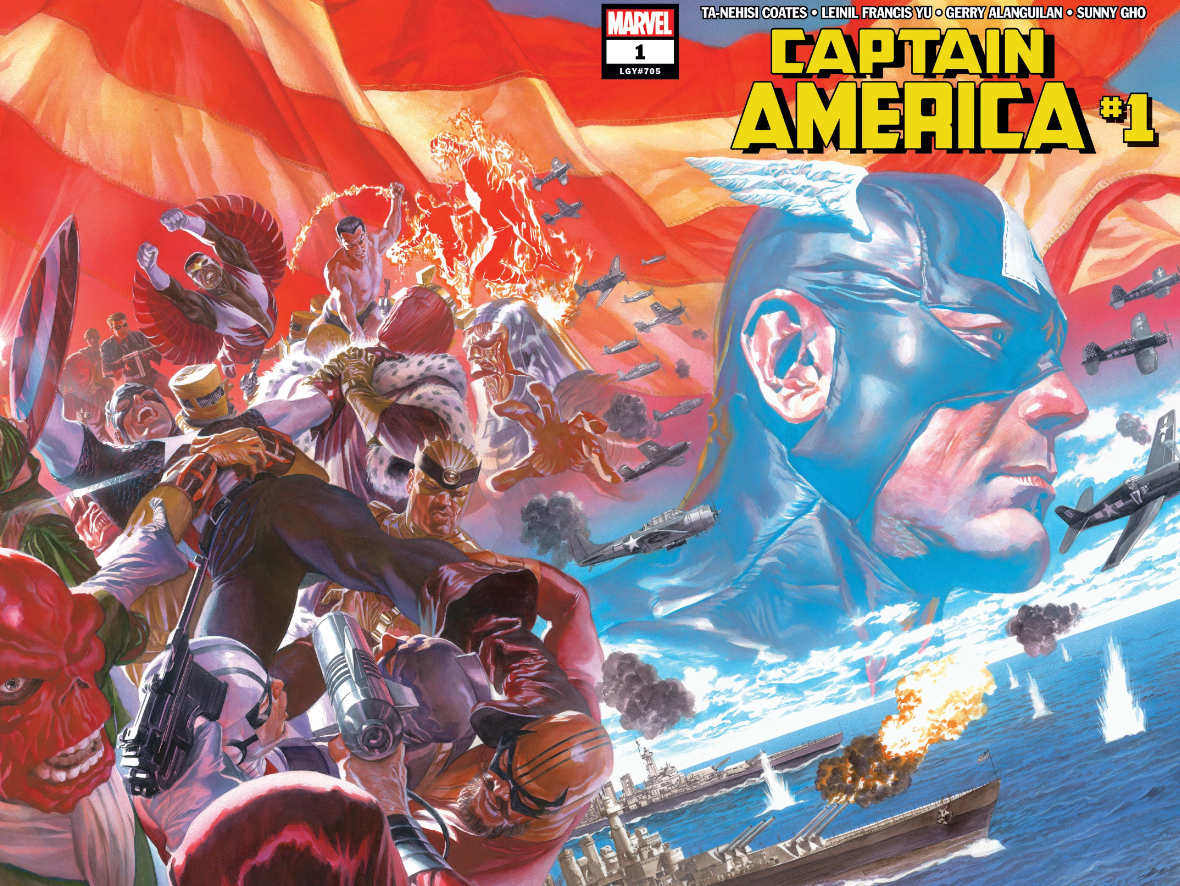 “I’m loyal to nothing, General—except the dream.”

With Captain America #30 out now, Ta-Nehisi Coates, one of our all too few critical public intellectuals in the 21st-century United States, the Star-Spangled Avenger sees his most meaningful and entertaining era since Ed Brubaker and Steve Epting arrive at a conclusion that feels both classic yet timely. This comes as no surprise to readers who have followed the series over the past three tumultuous years, since July 4, 2018; throughout the run, Coates’ taut storytelling and clear meditative narration struck a fine balance between inspiring hopefulness and sobering clarity.

is a single narrative, an impressively taut thriller composed of several tight mini narratives building to an 11-issue multi-climax arc. The thematic and narrative consistency is refreshing, especially for a Marvel title. But the pandemic, of course, knocked everything sideways, and there was a five-month gap after issue #20. And in 2021, there were gaps in January, April, and June. Already, this is a book meant to be read in one or two sittings, which, as of July 7th, fans can now enjoy doing. And two back-to-back reads are recommended to really sink into this epic—because while the action flows relentlessly, there is so much going on between Steve and Sharon’s respective narrations and the loving and knowing use Coates makes of classic characters and continuity. END_OF_DOCUMENT_TOKEN_TO_BE_REPLACED

The 90s were a tough decade for Marvel. They started off great – In 1990, Todd McFarlane’s Spider-Man #1 sold 2.5 million copies and a year later Rob Liefeld’s X-Force #1 sold 5 million copies and Jim Lee’s X-Men #1 sold 8 million copies. Then in 1992 all three of these artists and a handful of others left Marvel to form Image. Then in 1996, Marvel was forced to file for bankruptcy. Between these two events, we got Heroes Reborn

, which was oddly shaped by both of these occurrences. This series, in a strange way, shaped the course of Marvel comics post-bankruptcy. END_OF_DOCUMENT_TOKEN_TO_BE_REPLACED

In the build to Falcon and the Winter Soldier, I talked a lot about the Marvel Cinematic Universe’s uncanny ability to merge influences. How – with the primary exception of Captain America: Winter Soldier – films are rarely a direct adaptation of one thing, and instead a merger of ideas, ultimately synthesizing to something new.

The end result is that I’ve rarely watched the MCU thinking too heavily about how “the comics did it better,” or falling back on the cliched evergreen truth: the book’s better than the movie. Mostly this is a testament to very strong storytelling, a remarkable blend of focus and quality control, and again, just enough remixing comic book influences to feel fresh on screen.

Falcon and The Winter Soldier is the most heavily I’ve felt the distractions of the source material. There are three distinct Marvel stories the TV series very openly pillages, and the one largely unique storyline – the post “blip” rise of the Flagsmashers – is so egregiously porous, that everything suffers. END_OF_DOCUMENT_TOKEN_TO_BE_REPLACED

Captain America is as much a legacy and an ideal as an individual. Having such a split identity inherently creates problem—the stuff of dramatic tension; Cap’s not wholly unlike Spider-Man in that way. Add to that, however, the inextricably political and societal dimensions of Cap as a national treasure. Writers on the title have, since 1972 at least, dealt directly with America’s social and political ills, some more successfully than others, but none had ever explicitly addressed the deep-rootedness of our society’s systemic flaws until Mark Waid’s brief 1998/99 run. Yet it would take over another decade before they’d really be looked at again but without the naivete mainstream society could still afford in the 1990s.

Unlike the take-it-for-granted introduction of Cap to moviegoing audiences in 2011, the comics creators working on the monthly book over the decades knew that the concept of Captain America had increasingly become a hard sell. A superhero wearing a national flag screams nationalism, and yet Cap’s enemies—including his worst pretenders—are nationalists and ethno-fascists. He fights for “the American Dream,” and yet the last great run to seriously tout that idea without explicitly critiquing its foundations was Mark Waid’s in the late ’90s (although he does criticize how inaccessible it was becoming, leaving out a more honest look at American history until his superb Man Out of Time mini over a decade later).

In the 21st century, both concepts must struggle mightily for relevance. END_OF_DOCUMENT_TOKEN_TO_BE_REPLACED

For generations, Steve Rogers, and several others, have stood as an example of an American ideal, charging into battle decked out in the red, white, and blue.

And when Joe Simon and Jack Kirby created Captain America in 1941, it was to be as a symbol of America’s best qualities in the face of Hitler’s expanding Nazi empire, even before the United States became officially involved in World War II. But to have a character draped in the colors of a nation is to permanently tie that hero to the real world. In a time when the United States fought against true evil, it was easy for the morals and message of Captain America to be clear cut and inspirational. But what happens when that character is pulled into the modern era and a time of grey morality and murky politics? END_OF_DOCUMENT_TOKEN_TO_BE_REPLACED