Let’s get this out of the way. If the Marvel Universe put together a tournament to crown the most unlikeable character, our friend Quicksilver would be the #1 seed. Pietro Maximoff — along with his sister, Wanda, the Scarlet Witch — graced us with their presence way back in the original Lee/Kirby X-Men. Pietro has remained brash, impatient, and generally the worst throughout his comic history. He also happens to be a world-class speedster who has spent significant time with the Avengers, the Inhumans, the Fantastic Four, and across various X-Books. Let’s get up to speed. 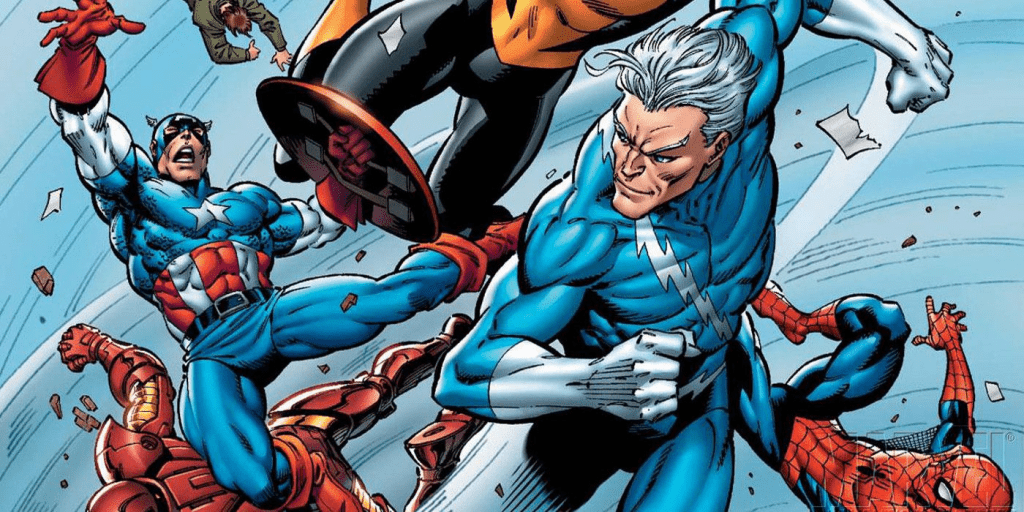 Quicksilver starts off on the wrong foot before realizing the error of his ways.

Quicksilver and his sister, the Scarlet Witch, are introduced in issue 4 as part of Magneto’s Brotherhood of Evil Mutants. The twins owe Magneto a life debt after he saved the Scarlet Witch’s life, but It is quickly apparent that Magneto’s dangerous ideology is too much for them. 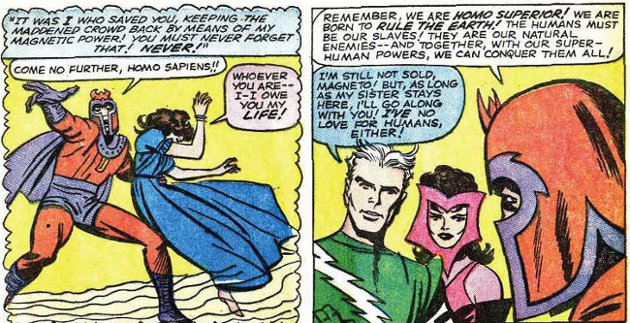 Quicksilver and the Scarlet Witch join a new Avengers team as Pietro attempts to be on best behavior.

Avengers Epic Collection: Once An Avenger

Magneto abducts the twins and attempts to brainwash them into rejoining the brotherhood.

This decade is an important period for Quicksilver as his character begins developing outside of the relationship with his sister. It is not great, though, as Quicksilver has an awful personality.

Critically injured in a battle with the Sentinels, Quicksilver is saved by Crystal (and Lockjaw) of the Inhumans. Crystal nurses Pietro back to help, and they fall in love with the intention to get married. Pietro always finds out about Wanda’s relationship with Vision.

Crystal’s former boyfriend, The Human Torch, travels to Attilian and does not take her and Pietro’s news well.

The Wedding of Crystal and Pietro has a very special guest, Ultron.

As the first non-Inhuman to marry into the Royal Family, Quicksilver is given a mission with Crystal’s life at stake.

Quicksilver is part of the Avengers team during the wacky Korvac saga.

An important series that sheds light on the twins’ upbringing.

Like most of us, Quicksilver’s life in the 1980s will not be looked back fondly upon.

Vision & The Scarlet Witch – The Saga Of Wanda And Vision

Quicksilver and Crystal’s marriage falls apart, and the twins learn the truth about their father.

Fantastic Four Epic Collection: All in the Family

Quicksilver attacks the West Coast Avengers, including his sister. Get a hold of yourself, Pietro.

The 1990s are Quicksilver’s first redemption after falling from grace. Don’t get me wrong, he is still a curmudgeon, but he at least is trying to do right.

The unfortunate truth about Wanda and her twins.

Reeling from the events of Darker than Scarlet, Quicksilver leaves the team.

Fearing his powers are killing him, Quicksilver turns to the Government-sponsored X-Factor for help. 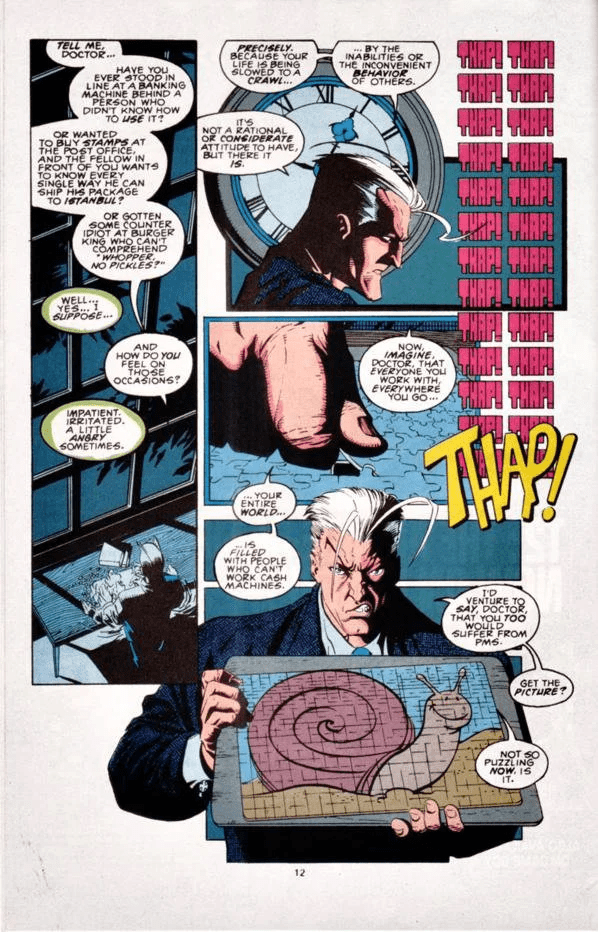 Quicksilver is part of the combined X-Teams trying to unravel the plot of Professor X’s life.

Magneto’s Acolytes attempt to recruit Quicksilver to their side.

Quicksilver’s daughter, Luna, is kidnapped as terrorists attempt to stage a war in Genosha.

Pietro returns to the Avengers but is left heartbroken due to the events of Onslaught.

In this rare standalone series, Quicksilver receives a promotion of sorts as he becomes the leader of the Knights of Wundagore.

Quicksilver is one of many candidates brought in for a relaunched Avengers squad.

Let’s be honest; this is an incredible name for a series. Also, Polaris and Quicksilver try to spy on Magneto.

Quicksilver is by the Scarlet Witch’s side as her walls come crashing down around her, leading to the House of M. For more, please check out House of M. 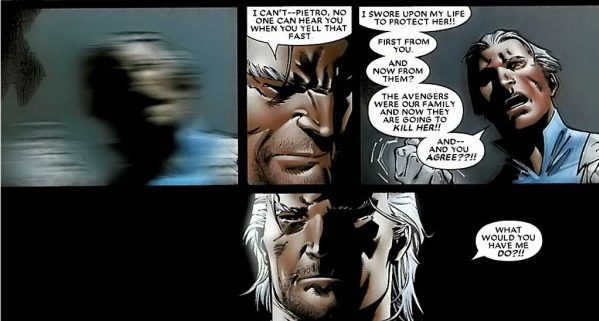 Quicksilver’s life in the House of Magnus is further explored.

A Broken Pietro turns to desperate measures after the events of House of M.

A brutal confrontation between Black Bolt brutally and Quicksilver set after the events of Son of M.

X-Factor Vol. 3: Many Lives of Madrox

X-Factor continues to keep Quicksilver at an arm’s distance while they try to discover his intentions.

Quicksilver’s plot comes into focus. Can X-Factor stop him in time?

A repowered and redeemed(?) Quicksilver joins the Mighty Avengers.

Quicksilver attempts to make amends to the Inhumans with a gift and finds out about Crystal’s new husband, Ronan the Accuser.

Quicksilver becomes a teacher at the Avengers Academy and with one student blackmailing Pietro for extra course work.

A tale from the forgotten past, as the first X-Men cross Magneto’s first Brotherhood of Evil Mutants.

Uncle Pietro gets involved in the conflict over Wanda’s now super-powered twins.

The Academy seeks help from Magneto, which bristles our surly speedster.

The Phoenix is coming! Quicksilver joins the fray as the Avengers and X-Men face off. For more on this event – please see Avengers Vs. X-Men.

Quicksilver is a double agent but for once in his life, for good reasons.

After a lifetime of acting like Quicksilver, Pietro tries to make amends with his daughter Luna. For more on this event – please see Axis.

The Scarlet Witch and Quicksilver find Hydra has built a time portal. Nothing to see here.

Quicksilver and The Scarlet Witch take a vacation to counter-earth and learn the shocking truth around their history.

Uncanny Avengers: Unity Vol. 2: The Man Who Fell To Earth

Quicksilver faces off against Ultron, and it doesn’t go well.

Scarlet Witch tries to unfold the mysteries of her life, so of course, her brother is hanging around.

Red Skull has made Quicksilver a hypnotically-programmed sleeper agent. 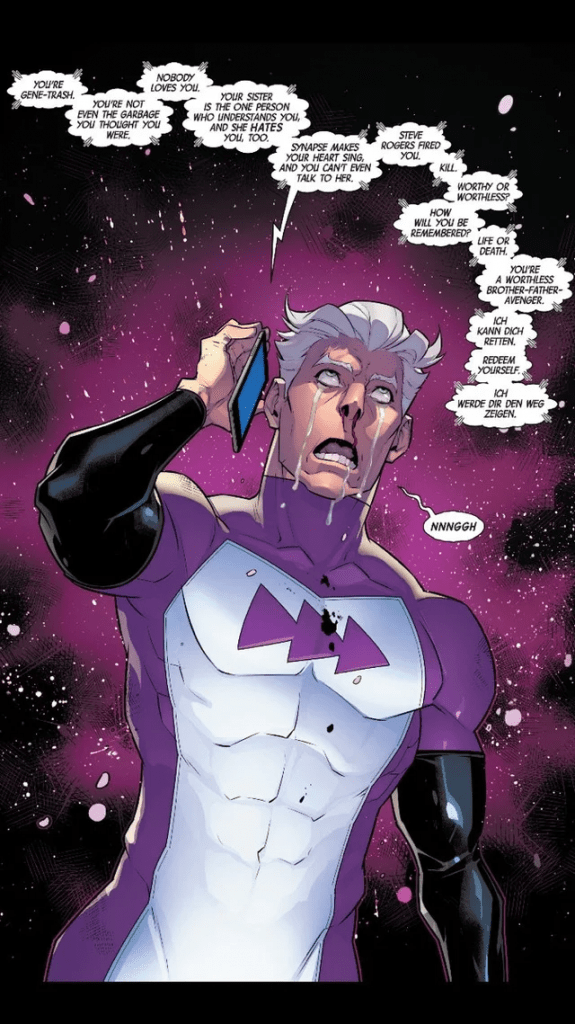 Quicksilver’s (admittingly suspect) loyalty is called into question as losses start to pile for the Rebellion during the events of Secret Empire. For more on this event, please see Secret Empire.

Quicksilver’s ego has near-fatal consequences for one Avenger.

The whole dang Earth is stolen and the only heroes who aren’t left frozen in time is the nearly infinite Avengers bench. A grand finale for Waid Avengers, Ewing’s USAvengers, and the Unity-squad Avengers.

As the superpowered chess match continues throughout No Surrender, Quicksilver is pulled to a world frozen in time with someone—or something—targeting the important people in his life.

During the events of Empyre, Quicksilver and Mockingbird and Woman Man, attempt to keep the peace between a temperamental Skrull-Kree alliance. For more on this event, please see – Empyre.