You may have heard, but Spider-Man: No Way Home is poised to be kind of a big deal. The multiverse hopping mega movie has been hyped up for months, with rumors swirling about the return of virtually anyone who has ever had a major moment in the 2000s Spider-Man movie-verse! Whether you’re here for JK, Alfred, Willem, Tobey, Andrew, Jamie, or all of the above, we know No Way Home is set to deal with the fallout of Peter Parker’s double life revealed at the end of Spider-Man: Far From Home, and that the Marvel multiverse is very much at the center of where the MCU is heading. END_OF_DOCUMENT_TOKEN_TO_BE_REPLACED

After the pandemic-impacted 2020, Marvel’s 2021 is slowly but surely back on track, with a wide variety of excellent comics. All in all, it’s a good time to be a Marvel fan, and I’m listing out my favorite picks for those looking to dive in.

It’s an interesting year for Marvel, three years after the launch of the “Fresh Start” era, as some of the line’s biggest titles (Black Panther, Immortal Hulk, Venom, & on a technicality, Jonathan Hickman’s X-Men) wind down throughout the year. Even with that turnover, “Fresh Start” is heartily sustained through the Krakoa era of X-Men, an exciting new Marvel Space Age, and a healthy variety of quality throughout the broader universe. Honestly, even some of the big time runs I’m least enthused by (Jason Aaron’s Avengers and Nick Spencer’s Amazing Spider-Man) are remarkably consistent, and offer plenty of intriguing moments. It’s a truly good time to be a fan of Marvel Comics. END_OF_DOCUMENT_TOKEN_TO_BE_REPLACED

One of my favorite aspects of House of X  / Powers of X and Jonathan Hickman’s takeover of Marvel’s X-Men comics line is how many new or lapsed readers want to dive into the vast and often complicated world of the X-Men. While I have a wide array of guides on Comic Book Herald – including massive full reading orders for all of X-Men – I thought it’d be easier for some new readers to start with a fast-track guide to the essential starting places. END_OF_DOCUMENT_TOKEN_TO_BE_REPLACED

A founding member of the Avengers, a father, a friend, and a deeply flawed man, the Hulk has more in common with DC’s Swamp Thing than Marvel’s own Man-Thing does. A man out of time, out of place, and with a dangerously close connection to something primal. His best stories understand this, the unique position he commands both physically and philosophically in the comics sphere, and they deliver on that promise with a marriage of the intense depth that come from both Bruce’s raw humanity, and yes, a whole lot of Hulk smashing. These are the best Hulk comics:
END_OF_DOCUMENT_TOKEN_TO_BE_REPLACED

Ten stories highlighting Kang the Conqueror at his best and worst! 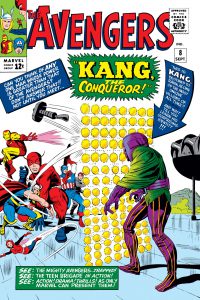 Debuting all the way back in 1964, the time-traveling Kang the Conqueror is a bedrock villain in the Marvel Universe, frequently clashing with the Avengers but still possessing a rich history throughout the wider Marvel Universe, spinning off variants, divergents, and time paradoxes along the way. With Kang, played by Jonathan Majors, recently appearing in Disney Plus’ Loki series and set to appear again in the upcoming Ant-Man and the Wasp: Quantummania, the character is posed to breakout in a big way – possibly even as the “Thanos” of the Marvel Cinematic Universe’s fourth phase of films (and beyond).

But with nearly sixty years of accumulated adventures, it’s easy to be overwhelmed by the character’s long (and often complex) history. Here then is a guide to the best Kang stories, the ones which showcase the core attributes of the character, define who he is and what he wants, or simply have a lot of fun with the character and his propensity for time travel shenanigans!