Elizabeth “Betsy” Braddock (Callsign: Psylocke) is a Chris Claremont creation, making her first appearance in Captain Britain (vol. 1) #8 (Marvel UK. 1976). First introduced as Brian Braddock (Captain Britain’s) twin sister, Betsy did not initially appear to be destined for greatness. But over time, her character was given mutant telepathic abilities and brought stateside in the early 1980s, eventually becoming a core member of the X-Men and a fan favorite.

This era marks Betsy’s initial appearances in both Marvel UK and US.

*Hullo is a nod to Chris Claremont’s subtle way of letting readers know that Betsy was British.

Captain Britain 1: Birth of a Legend

Betsy and her (very normal) older brother Jamie are little more than plot devices in their initial appearances, with both being kidnapped to punish their brother, Brian. Over time, Betsy becomes more three dimensional, with her psychic abilities starting to develop. 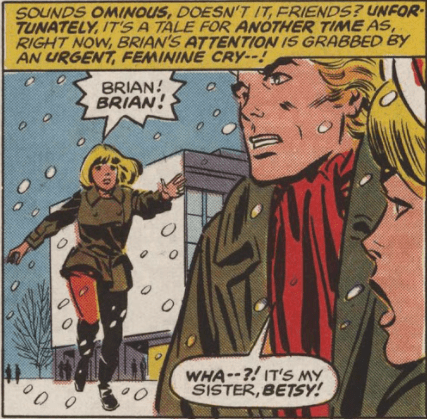 Alan Moore’s Daredevils starts to redefine Betsy as a character. She has started to work for STRIKE (The UK’s SHIELD), and her hair is now her trademark purple. Alan Davies’ Captain Britain sees Betsy briefly take over the mantle before being tragically maimed by Slaymaster.

Betsy’s first US appearance, and a new introduction as “Psylocke.” Mojo has eyes for Betsy, and she partners with the New Mutants before being introduced to the X-Men.

Not yet a member of the team, Betsy mutant abilities are found to be useful by the team as the X-Men were sorely missing a telepath. She has her first (unfortunately not last) encounter with Sabertooth. Most importantly, this is when Besty joins the X-Men officially.

X-Men Milestones: Fall of the Mutants

The X-Men have to make a sacrifice in order to defeat the Adversary. Roma introduces the Siege Perilous.

Now a full-fledged team member with body armor and all, Betsy’s life is about to change dramatically. 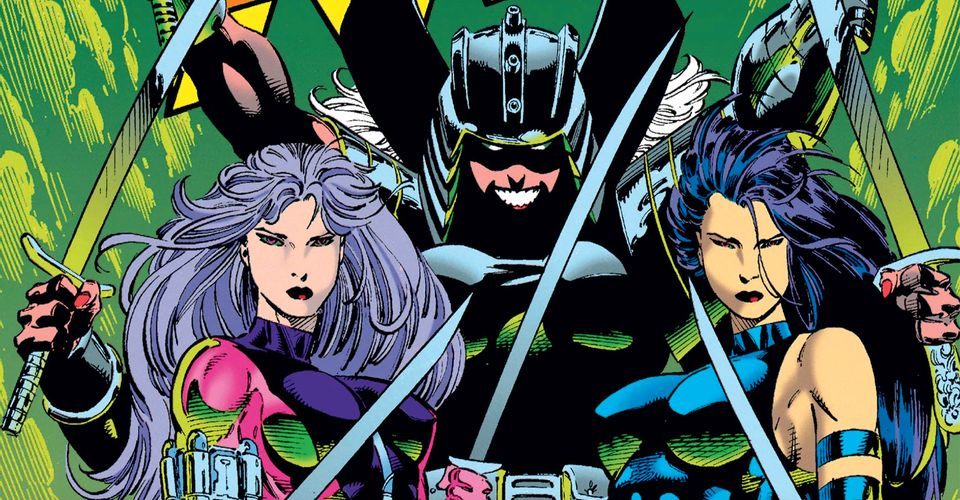 Betsy travels through the Siege Perilous gateway, leading to a major event in X-Men history: she’s body-swapped and brainwashed by the Hand.

Betsy has her first of many encounters with the Shadow King.

With membership booming, the X-Men split into two teams. It was a big deal for Betsy to Cyclop’s “Blue Team” and feature alongside other 90s favorites Rogue, Gambit, Jubilee, and Wolverine.

Betsy faces off with her older brother Jamie who is now the speedo-wearing reality warper we all know and love.

Betsy is part of the X-Men team engaged in Infinity War.

X-Men battle against Stryfe. The deadly Legacy virus is introduced.

X-Men: A Skinning of Souls

The fallout from the Siege Perilous continues. A mutant claiming to be Betsy Braddock (actually Kwannon) appears, and the X-Men have to stop the two Psylockes from killing each other.

Nestled in the X-Wedding event of the century is the sad fate of Kwannon.

Betsy is part of the X-team dragged back in time as Legion hunts for Magento.

The Girl with the Crimson Face Tattoo

Coming out of the Age of Apocalypse – Betsy has a rough road ahead.

X-Men: The Road To Onslaught Vol. 1

X-Men: The Road To Onslaught Vol. 2

Betsy is in critical condition after a fight with Sabertooth, leaving the team to hunt down the deadly mutant.

X-Men: The Road To Onslaught Vol. 3

With Betsy near death, Angel, Wolverine, and Doctor Strange search for a mystical cure.

The X-Men and other heroes from the Marvel universe struggle to stop Onslaught.

The X-Men find themselves having a hard time adjusting to Betsy’s new power set.

Betsy and Angel are forced back into the world that had previously saved her life.

Betsy faces off with the Shadow King again and helps unravel another one of his plots.

X-Men Vs. Apocalypse Vol. 1: The Twelve

Betsy’s telepathic abilities are compromised after her battle with the Shadow King, making every use of powers potentially dangerous.

A new X-Book launches with a new villain and deadly consequences for Betsy.

Reborn & The House of M

After nearly 4 years away, Betsy returns.

Betsy is found in the same spot as she was previously slain but without her crimson dawn marking.

Betsy joins Excalibur as they face off with the Shadow King’s Shadow X-Men.

Betsy and Rachel Summers have a stopover in the Phoenix’s White Hot Room and spend their House of M vacation at the Braddock residence. Betsy learns who is behind her resurrection.

For more about this event, please see House of M and Tie-Ins (2005)

Chris Claremont takes over writing the Exiles, and unsurprisingly Betsy joins the team.

Exiles Vol. 15: Enemy Of The Stars

Betsy is recruited to the Exiles team as they face off against alternative versions of Madame Hydra and Slaymaster.

Betsy stays on with the Exiles and adopts a new role as the team meets a Doom lead version of the Fantastic Four.

X-Men: Die By The Sword

A crossover event with The Exiles and Excalibur as they are drawn into an omniversal coup.

New Exiles Vol. 3: The Enemy Within

Betsy tries to deal with her fears of Slaymaster – knowing that Slaymasters have been hunting Betsy Braddocks across the multiverse.

Echoing back to her initial appearances in Captain Britain, Betsy has a deadly final confrontation with Hydra’s Slaymaster.

The Many Teams of Betsy Braddock

Betsy returns to mainstream X-Men continuity and joins a Wolverinesque amount of teams. From a continuity standpoint, this means Betsy will start appearing beyond just X-Men books, particularly since this is a big event era. For further X-Men reading, please see X-Men Events Fast Track (2007 to 2012). But watch out for X-Force and other titles, which may have their own independent stories going.

Madelyne Pryor has Betsy plucked out of the timestream, attempting to use her body to resurrect Kwannon.

As the X-Men face off with Norman Osborn’s Dark Avengers, Betsy briefly joins the X-Science team in an underwater mission.

Betsy seeks revenge on those who are responsible for her brainwashing.

Cable and Hope are hunted upon their return, with X-Men trying desperately to keep Hope alive.

Betsy and X-Force face-off with Deathlok versions of themselves.

The ongoing battle for Warren Worthington’s soul takes X-Force to an unlikely place, the Age of Apocalypse.

As Archangel grows nearly unstoppable, Betsy is faced with an impossible choice.

You would think the X-Men would be used to waking up in strange new worlds, but here we go again. In this reality, Betsy is part of the force warriors who are an essential part of this version’s defense.

Fear Itself: Uncanny X-Force / The Deep

This event doesn’t fit squarely into continuity, but you do get to see X-Force punch various Purifiers in the face.

Betsy is forced to choose a side in the fallout of Cyclops and Wolverine.

Who would have thought that Black Market Sentinels were a good idea? Obviously not the X-Men who are called to Eastern Europe to investigate.

X-Men: The Curse is Broken

This is one of the rare Uncanny X-Men books that directly is impacted by Uncanny X-Force. Please make sure to finish the Dark Angel Saga Book 2 before reading.

Betsy and Fantomex are taken to Otherworld, and Betsy once again is forced to make a brutal choice.

X-Force is transported to a dystopian future, and it is not great, Bob.

X-Force squares off with the Brotherhood of Evil Mutants. Does Betsy get a happy ending?

A near Omega-Level Proto-Mutant has been living in secret and does not love it when Psylocke pokes around in his head.

Oh boy. The Phoenix is back, and the X-Men go to war with the Avengers.

Check out Avengers Vs. X-Men and Tie-Ins for more about this huge event.

Billed as “The X-Women get their own book!”, the X-Men face off against sentient bacteria. Trust me; it’s more thrilling than it sounds.

Betsy has trouble reconciling school life after her X-Force stint and instead reforms a very different X-Force. The first mission is going after Spiral, who has continued to make poor life choices.

This arch tells the story of what happened between Betsy and Fantomex after the events of Final Execution.

Cassandra Nova’s back, and she still is the worst.

Simon Spurrier takes over the X-Factor book. Someone is turning mutants into bombs? Sounds like a job for X-Force.

The curious case of Forgetmenot.

Lady Deathstrike’s Sisterhood of Evil Mutants is formed to take on the X-Women team.

With Jubilee’s bouncing baby boy, Shogo, in danger, Betsy is forced to take a group of students into battle.

Abigail Brand calls with disturbing news; the X-Men are off to space.

Nightcrawler has just been born. Naturally, Betsy, along with the rest of the X-Men, have their minds possessed by the Shadow King, who wants the blue imp dead again.

Krakoa is sick, and the X-Men are trapped underground with monsters. It’s like the movie “The Descent” but with a mutant island throwing up all over the place.

A teammate turns bad (you’ll never guess which one), and everyone’s secrets are revealed.

Facing possible extinction, the X-Teams splinter, with Betsy deciding to go on the offensive side.

Betsy, along with Magneto, leads a much darker X-Men made up of Monet, Sabertooth, and a dormant Archangel. Their task: to stop an assassin targeting every mutant healer on Earth.

Archangel and Warren Worthington are found to be separated. This is bad for generally everyone but really bad for Betsy.

Magneto’s team and Storm’s team face off on how to handle the Inhuman Ulysses with Betsy caught in the middle. More Civil War 2 here!

A hidden power is weaponizing mutants against the enemies of mutant-kind.

Betsy takes part in the battle against the Inhuman Royal Family. She tries her best. 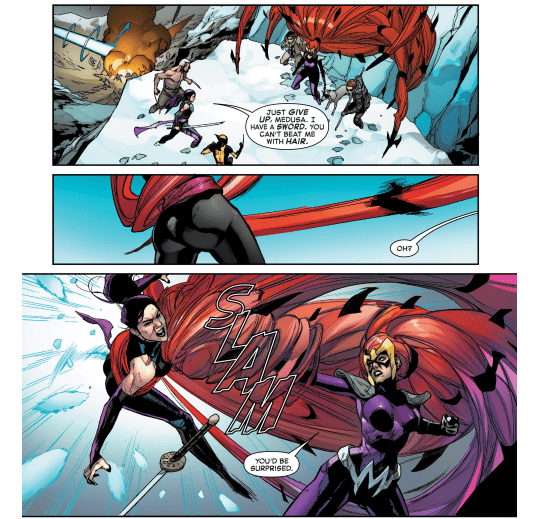 This arc starts with a bang as Betsy does psychic battle with the Shadow King, leading to the discovery that Professor X may be alive.

The battle with the Shadow King comes to an end.

Hunt for Wolverine: Mystery in Madripoor

A Wolverine sighting takes a group of X-Men to Madripoor, everyone’s favorite island of ill-repute built on top of a dragon. Come for the usual Madripoor shenanigans but stay for the multiple impactful events in Betsy’s life.

The X-Men tangle with an all-powerful X-Man.

Age of X-Man: The Marvelous X-Men

Our X-friends find themselves in another (yes, another) alternative timeline and forbidden feelings start to rise between Betsy and Fred Dukes.

Read more about Age of X-Man.

Jonathan Hickman’s ambition reconstruction of Mutants starts here. CBH has you covered with all your Hickman X-Men needs. (As well as Krakin’ Krakoa on the CBH YouTube!) 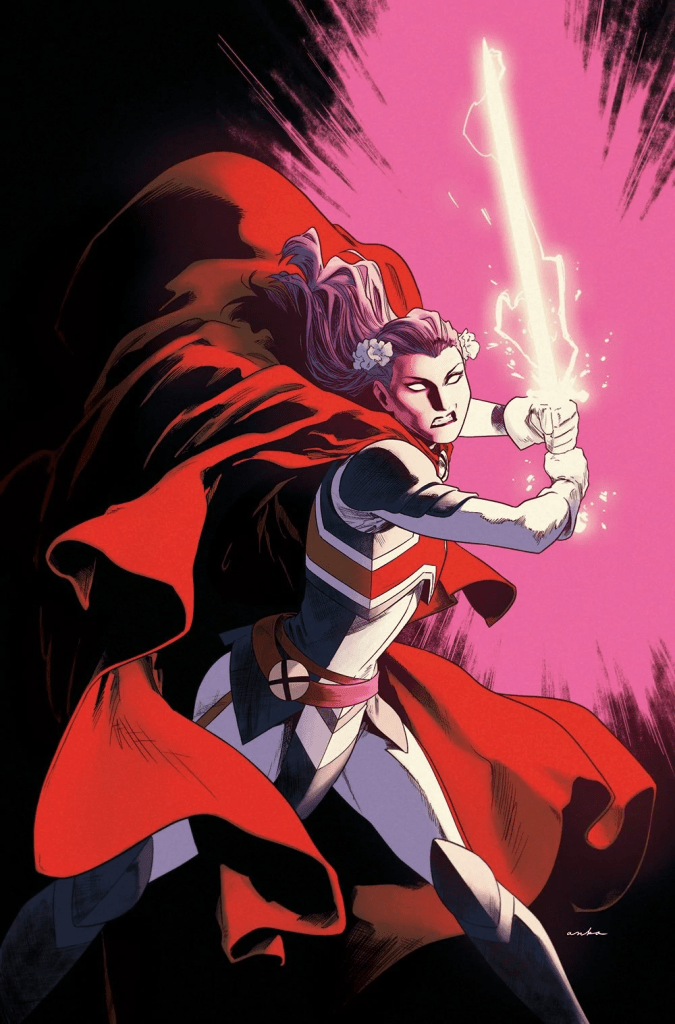 Tini Howard launches a new Excalibur with Betsy, previously returned to her original body, looks for a fresh start. She is dragged back into her family drama and adopts a familiar mantle.

Saturnyne does not really care for Betsy in her new role. The stage is set for X of Swords.