DC has the longest running history in comics, with a library full of brilliant characters and stories dating back to Superman’s first appearance in 1938. The thing about 1938 is literally nobody remembers what it was like then. For all science can tell us, DC may have been around since the beginning of time (Stephen Hawking just shed a tear, and he has no idea why).

This depth and breadth of stories makes fast track guides to the best of DC particularly challenging. There’s so much to read! Nonetheless, I’ve narrowed DC Comics to an essential best DC Comics guide, in relative chronological order, that will get any new or interested reader up to speed with DC Universe.

Eagle-eyed readers will notice a few things about this guide:

1) This fast track extends until 2000. If you want a fast track for more modern era DC, I recommend the following —

2) Proportionally, there are many more comics after DC’s Crisis on Infinite Earths

(the 1985 event that essentially ‘reset’ the DCU for the modern era). There are a few reasons for this, and in general I think readers are going to enjoy the heck out of the Post-Crisis era, but honestly pre-Crisis DC is just a damn challenge to catch up on. Until DC realizes a DC Unlimited service would expand love for their comic book history 52fold, this segment will remain comparatively barebones, especially in comics’ Silver Age.

Otherwise, below you’ll find the only guide you’ll need to DC essentials before the year 2000!

There are few reads in either Big 2 superhero universe that are more pure joyous comic book fun than the debut of Wonder Woman. Don’t worry, with DC Comics you don’t need to go all the way back to the late 30’s to understand every facet of Superman and Batman continuity. Nonetheless, in Wonder Woman’s case, these stories by creator William Moulton Marston are well worth the dive into the past.

Denny O’Neil and Neal Adams are frequently credited for transitioning Batman out of his campy Batman ’66 persona and into “The Dark Knight” we know and love today. These issues are a great look at that development, centered around the introductions of Ras and Talia Al Ghul.

After his departure from creating approximately 92% of the Marvel Universe, DC snagged Jack Kirby and he proceeded to build out his Fourth World universe of New Gods, Darkseid, and Apokolips. The frenetically energetic Kirby style takes some getting used to, but also features unbeatable highs for the likes of Orion and Mister Miracle.

Artist Walt Simonson would go on to deliver the greatest Thor run of all time for Marvel in the mid 1980’s, but in the mid 70’s he teamed with Archie Goodwin for a shockingly great “Manhunter” series. One of the most underrated entries on the list, and well worth digging up.

Please note the most accessible collected or digital versions of these comics are listed in a “Tales of the Batman” edition! 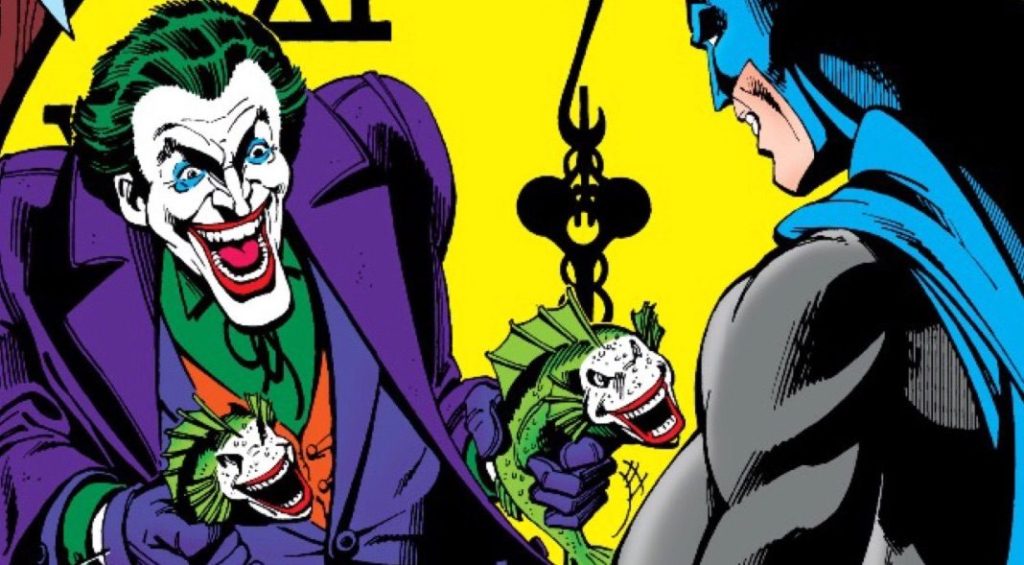 The Joker: The Clown Prince of Crime

+ Joker: A Celebration of 75 Years

For the Joker 75 Years Collection, only read these issues in the following order:

Joker’s first solo series in the mid 70’s pits the Bat’s arch nemesis against a variety of DC Universe staples. Then, in the “Celebration of 75 Years” collection, you can see when the Joker truly began transitioning into the chaotic evil enemy in “Joker’s Five Way Revenge” and “The Laughing Fish.”

Paul Levitz and Keith Giffen deliver one of my all-time favorite DC stories with a tale of The Legion of Super-heroes against a dark threat from the time of Superman. You don’t need to be a longtime Legion fan to enjoy.

DC’s answer to Marvel’s X-Men success, Marv Wolfman and George Perez reassembled the sidekicks of the DC Universe into a strong ensemble book. If the opening arcs don’t grab your attention, make sure to give “The Judas Contract” a fair chance, as The New Teen Titans cement Deathstroke as their ultimate enemy.

Superman: Whatever Happened to the Man of Tomorrow

I’ve never been particularly impressed by Alan Moore’s take on a “final” Superman story, but I do include this collection for collecting the Alan Moore story “For the Man Who Has Everything.” It’s one of my favorite single Superman issues of the era.

All-time great comic book writer Alan Moore took the reigns of Swamp Thing and (with Stephen Bisette and John Totelbon) crafted the series into one of the best horror comics in the DC Universe (and one of the best DC Comics of all time). If memory serves, I also believe the Moore Swamp Thing run (retroactively Vertigo) actually crosses over with Crisis on Infinite Earths in the middle of the run.

Before comic book events were a yearly occurrence, DC launched the mother of events, gathering their entire Universe together to face the threat of the Anti-Monitor in Crisis on Infinite Earths. The book’s a doozy for anyone without a PHD in DC Comics, although still has enough strong character moments from Marv Wolfman and George Perez for newer fans to grasp onto.

Arguably the best Batman story ever told, Frank Miller and David Mazzuchelli’s retelling of Bruce Wayne’s first year as Batman is a seminal graphic novel and a must-read for any DC fan.

John Byrne took the post-Crisis responsibility for redefining Superman, and launched a lauded and lengthy run on the Man of Steel.

Miller’s Batman and Byrne’s Superman get more of the attention, but George Perez shared similarly successful reinventions with his take on Wonder Woman. Perez’s run would come to define Ares as Wonder Woman’s archnemeiss, as well as the role of the Gods of Olympus in Wonder Woman comics moving forward.

One of the best graphic novels of all time, Frank Miller’s take on an older, more brutal Batman is a classic for good reason.

Prior to DC Rebirth, I wouldn’t have included Watchmen on my guide to DC Comics essentials. Although the publisher has always retained the rights to Alan Moore and Dave Gibbon’s masterpiece (and my favorite comic book of all time), it’s only in recent years that it has genuinely felt like part of the DC Universe fabric. A highly recommended read regardless.

A recommended reads list through DC’s history is pleasantly devoid of many events, but Legends has to fit in somewhere.

It’s now a controversial DCEU film, but even so, nothing beats John Ostrander, Kim Yale, and Luke McDonnel’s original run on Suicide Squad. Amanda Waller, Deadshot, and Boomerang have never been better.

Literally the only time anyone has ever had good reason to recommend a Hawkman story!

Alan Moore and Brian Bolland’s Killing Joke has undergone a critical reexamination in the 2010’s, with even Moore himself disavowing the book. The graphic novel detailing the Joker’s origin has always been one of my least favorite Moore stories, but that doesn’t negate Bolland’s excellent art and The Killing Joke’s standing as one of the most popular and influential reads in Batman history.

Batman: A Death in the Family

Much like The Killing Joke, Arkham Asylum is far from my favorite Grant Morrison work, but the graphic novel with Dave McKean’s stylized haunting art is an all-timer for good reason. The comic also deservedly sets the stage for much of what was to come in Rocksteady’s excellent Arkham Asylum video game series.

Speaking of my favorite Grant Morrison comics, Doom Patrol by Morrison and (primarily) Richard Case is one of the most inventive, exciting, and off-the-walls comics ever published by DC. Doom Patrol is another retroactive addition to the Vertigo stable, but the cast is very much integrated in the DCU, even interacting with the Justice League.

Slightly less weird than the Doom Patrol… but only slightly. Grant Morrison’s run on Animal Man redefined the character, as well as the role of comic book creators in their art.

One of the most notorious Green Lantern stories of all time, with Hal Jordan possessed by Parallax and the introduction of Kyle Rayner.

The Flash run that made Wally West the fastest man alive, introduced hyper-time, and remains to this day the go-to recommendation for Flash readers.

James Robinson takes a Watchmen-esque look back at DC’s earliest heroes, the Justice Society of America.

The story of how Bane broke the Bat.

The Death and Rebirth of Superman

Doomsday and Superman fight to the death, and although we all know how it ends, the Rebirth portion of Superman generates some excellent Supes stories.

John Constantine fights cancer in the way only he can, from Preacher writer Garth Ennis. My personal favorite Hellblazer story. 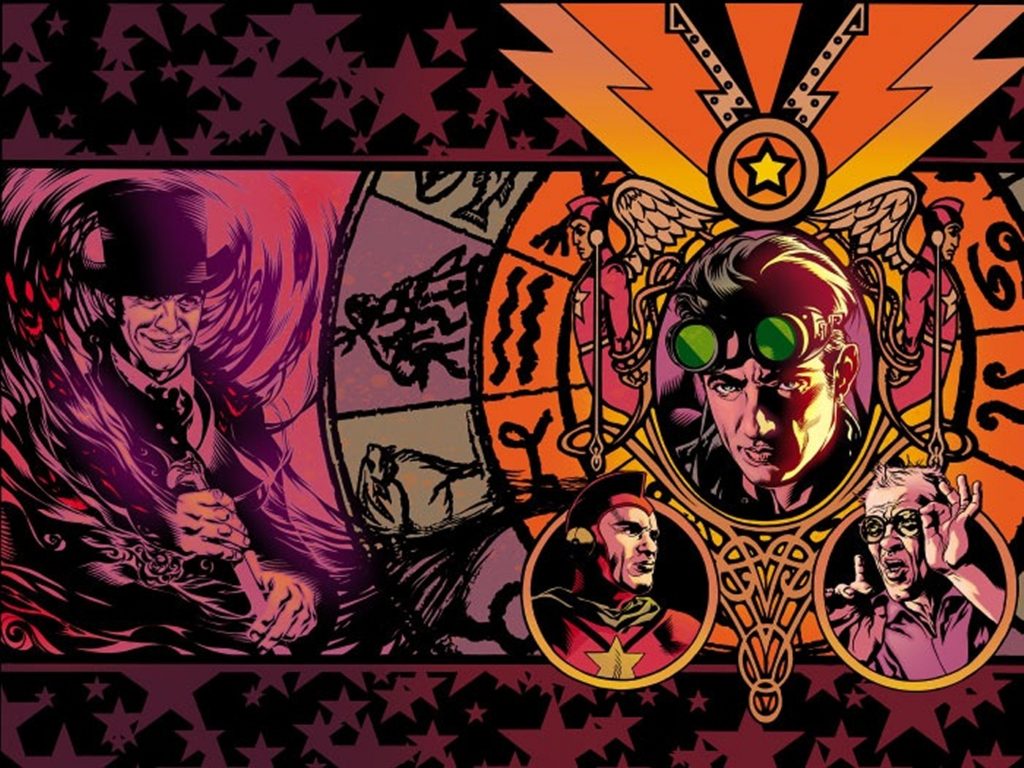 One of my all-time favorite extended superhero comics runs, from James Robinson and (primarily) Tony Harris. This is everything you want from a comic series starring a non A-lister.

Hitman could have fallen flat on its face, but the Garth Ennis and John McCrea became one of the best DC Comics of the 90’s. Less gleefully grotesque than Preacher, but with similar humor and heart, Hitman may well be Ennis’ best superhero universe work.

Speaking of King Impulse (aka Morrison), DC One Million proved to be one of DC’s best gimmicks, with every issue numbered #1,000,000 and taking place in the distant future.

Mark Waid and Alex Ross delivered one of the definitive graphic novels of the 90s, with a look at a younger generation of heroes challenging the aging DC heroes we know for supremacy.

The classic Batman: The Animated Series origin of Harley Quinn loses very little of its magic in this comic book adaptation.

Superman: For All Seasons

Jeph Loeb and Tim Sale together again for four issues of Superman, each taking place in a different season of his life. Batman: The Long Halloween gets most of the attention, but for my money, Sale’s Superman is some of his finest work.

Legendary Thor creator Walt Simonson took on Orion and the New Gods for over 25 issues, channeling a deep and abiding love of all things Jack Kirby for the new millennium!