Please note, expect spoilers for the full series, as we discuss it in detail.
END_OF_DOCUMENT_TOKEN_TO_BE_REPLACED

I was in a theater conservatory program in college. One day I was moving into a dorm in New York City’s East Village. A few days later I trekked across town to my first day of training in a nondescript second floor studio space amongst the warehouses and unmarked nightclubs of Chelsea’s meatpacking district. Our syllabus had the sorts of classes you’d expect from an acting school; Script Analysis, Movement, Voice, Speech, Performance Technique, but there was one class listed that I could not figure out: Repetition. END_OF_DOCUMENT_TOKEN_TO_BE_REPLACED 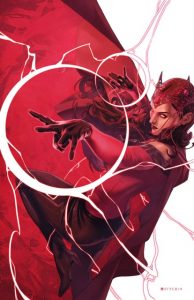 We’ll take a deep-dive into Wanda and find out. I’ll be citing my references, but fans may still want to take a crack at our reading order for the Scarlet Witch before we begin. END_OF_DOCUMENT_TOKEN_TO_BE_REPLACED

Dave: Hello and welcome to Comic Book Herald’s WandaVision review! Kenneth Laster and I will tackle the first two episodes of Disney+’s WandaVision, the debut Phase 4 release for the entire Marvel Cinematic Universe. It’s the first new entry in the MCU since Spider-Man: Far From Home in July 2019, kicking off a Phase that promises the likes of Loki, Falcon and Winter Soldier, Black Widow, and most relevant to WandaVision down the road, Doctor Strange 2 and the Multiverse of Madness.

Please note, some spoilers for the first two episodes may follow! END_OF_DOCUMENT_TOKEN_TO_BE_REPLACED

As the Disney+ series WandaVision is released, Comic Book Herald critics will explore Wanda Maximoff’s comic book history, and where the character may be going moving forward, in an ongoing weekly series we’re calling “The Great Pretenders: What To Do With Marvel’s Scarlet Witch?!”

Wanda Maximoff’s fall from grace was more gradual than is generally acknowledged, but for our purposes, it mostly took place through the stories Avengers Disassembled, House of M, and Decimation. After causing countless calamities with her infamous “no more mutants” line, an amnesiac Wanda ended up in Wundagore, then engaged to Doctor Doom in Latveria, before regaining her memories in The Children’s Crusade

As such, though Wanda seemed to be on a path to healing as far back as 2010, it’s been quite an uphill battle. As recently as the Empyre crossover

, her mix of good intentions with an apparent inability to take prudent advice once again combined to create catastrophe, which could leave a lot of fans wondering if she learned anything at all in the many years that took place between these arcs. The answer to that, of course, is – kind of. It’s complicated. END_OF_DOCUMENT_TOKEN_TO_BE_REPLACED