.
You are here: Home / Featured / Rage of Ultron Review!: Does ‘The Killing Joke’ For Ultron Live Up To The Hype?

What’s the defining Ultron story of the last 15 years? It’s a deceptively tricky question to answer, especially when you realize Kurt Busiek and George Perez’s “Ultron Unlimited” (from Avengers #19 to #22) was 16 years ago. Rage of Ultron attempts to fill the void, but can this Marvel OGN do one of the Avengers greatest villains (in)justice?

It’s no surprise that as Avengers 2: Age of Ultron sets course for the destruction of every box office record imaginable, Marvel would begin to unleash a slew of Ultron-related comics. While Avengers: Ultron Forever presents an intriguing ongoing comic, complete with heroes-plucked-from-different-eras ala Kurt Busiek’s Avengers Forever, and does at least referentially connect to Marvel’s impending Secret Wars, it’s outside of the world of the ongoing comic that Ultron gets the most attention. 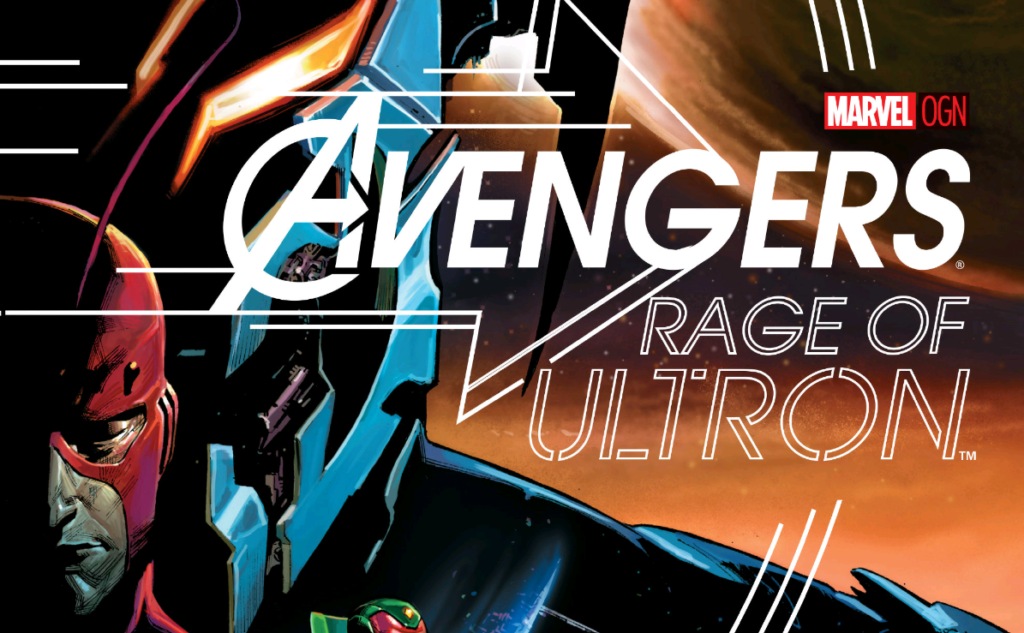 The Defining Ultron Story for the 2000’s

Simply put, “Rage of Ultron” is exactly the defining Ultron story it sets out to be, simultaneously giving us the definitive Hank Pym and Vision of the 2010’s as both characters prepare for their MCU debuts this summer.

This is appropriate, as both Pym and Vision are part of the Ultron family. If you’re unfamiliar with the lineage of Ultron, I’d first highly recommend you read those Busiek and Perez Avengers issues. It’s another all-time favorite Ultron story, with the unending robotic consciousness at his most menacing, and there’s a good reason we covered it first in the Comic Book Herald reading club.

As I noted in the CBH reading club discussions, the familial elements of Ultron have always detracted from the character for me. They’re intended to add to the drama, but in a lot of ways I think they often lessen the mechanical terror of a villain as unfeeling as Ultron (Kurt Busiek, who draws heavily on the familial issues and attachments of Ultron, writes the introduction to this OGN and makes a compelling case for this element of the character).

Rage of Ultron is the first Ultron story I’ve read in a long while where the genocidal urges of an inhuman machine blend perfectly with the unshakeable human thought patterns that grant weight to Ultron’s paternal pyschodrama with Hank Pym. A series like Age of Ultron approaches the cold metallic black of death by Ultron without any of the humanity, whereas a Mighty Avengers goes for all Oedipus Complex and no menace. I’ve always had a hard time viewing Pym and Ultron as father and son, but Remender and Opena pull it off in the flashback sequence to an earlier incarnation of the Avengers battling Ultron.

Speaking of the flashback, Remender and Opena do an incredible job with the earlier days of the Avengers, drawing on the 70’s-era Avengers and capturing the feel of the team to a tee. We have Hank Pym as Yellow Jacket, working out all his personal dilemmas in a peaceful way, and best of all, we have Momma McCoy’s bouncing blue boy, The Beast, cracking wise and reliving his fun-loving Avengers days!

Ultimately, this works very well for Rick Remender and Jerome Opena, as the original graphic novel Avengers: Rage of Ultron functions quite nicely as a maybe-in/maybe-out of continuity singular story. The earlier Avengers incarnation shoot Ultron into space (Hulk called, he wants his concept back), which as you’d imagine, never comes back to haunt first Titan and then Earth in any way.

The flow of the book is reasonably straightforward, and if you haven’t touched a Marvel OGN before, get ready for a snack-sized graphic novel you’ll consume in one (maybe two) sitting(s). These graphic novels are gorgeously packaged, and Jerome Opena’s art is astounding to look at, especially as Ultron returns to present day. Much like Avengers: Endless Wartime, and The Infinity Revelation, Marvel’s preceding OGN’s, these are great looking books to own. Nonetheless, be warned that they are thin, and read more like a super-sized annual than a graphic novel.

Does Rage of Ultron Count?

It’s nearly impossible to discuss the remainder of Rage of Ultron without addressing the biggest question: Is this story in continuity with the rest of Marvel Comics? Does this one count, or should we just enjoy it as a standalone story?

It’s an intriguing question. There’s a popular Reddit theory that Rage of Ultron takes place after Secret Wars which sort of works, but not entirely. First: It seems like a strange move by Marvel to tell us that after Secret Wars Rick Remender’s Uncanny Avengers will be basically untouched with an apparently unchanged status quo. The whole thesis of Secret Wars is everything blows up and this present day Avengers roster (Captain America (Sam Wilson), Thor (Female), Quicksilver and Scarlet Witch, Wasp, Hank Pym, Vision, Spider-Man, and Sabretooth (Uh… Yeah)) feels real “present-day-pre-secret-wars.”

Rage of Ultron is also surprisingly indebted to Remender-verse continuity, with Uncanny Avengers and Axis references to Stark sentinels, Sabretooth even being around, and the Wasp’s future Kang child (that came out wrong). If you’re not up to speed on at least Avengers vs. X-Men: Axis, this is a potentially confusing one-off graphic novel. The story definitely begins more in-continuity than not.

The biggest two problems with the idea of this being in continuity for me, though, have nothing to do with the ending. I won’t spoil the “twist” for anyone, other than to say: I’m totally cool with it. It’s the most interesting thing to happen to that character in years, and it’s Marvel Comics at its most Marvel Comics-y.

The first major problem is that in the flashback sequence, Ultron is shot into space by the Avengers so he’ll stop killing everyone. Fair enough. Then Ultron shows up in the present day, landing on Titan, the moon of Saturn home to Mentor, Starfox (lotta screen time for Starfox in this one which is a win for all of us), and oh yeah, THANOS.

Now… this is asking you to accept a lot about launching an Ultron into space. First, it takes, what, a decade in Marvel time for a ship to go from Earth to Titan? Ok fine. The Avengers, and Hank Pym, one of the smartest men in the world, couldn’t have programmed a spaceship that wouldn’t crash within our solar system? Ok, fine. But… wait, what about all the times Ultron showed up in between those adventures, including the time he straight up caused an Annihilation event sequel in Annihilation: Conquest. In space. Not on Titan. Wha? Huh??!!

It’s a tough sell (my favorite personal theory is that Ultron has just been cruising everywhere in his intended Avengers prison-Quinjet and inviting all sorts of lady robot A.I.’s in like “The Avengers rode in this”), but possibly not the toughest. Again, I don’t want to spoil anything for you, but when Ultron returns to the present day (and takes over Titan as a literal planet), things don’t go particularly well for our heroes. To the point that I’m not sure a lot of them make it. This is far from uncommon in Marvel Comics, but if this is in continuity, man do they got some ‘splaining to do.

Why Rage of Ultron Is Worth It

One of my favorite things about Rage of Ultron is how writer Rick Remender synthesizes his tendency to overtly tackle big themes into one streamlined story. Remender comes out of the gates broiling, with scathing Ultron analysis of the plague of humanity. Yes, this is an evil robot speaking to us, but damn if the criticisms don’t feel justified of our flaws as a society. From there Remender goes full speed ahead into the nature of fatherhood (here the Pym / Ultron dynamic, although we’ve seen Remender explore this with Wolverine / Daken in Uncanny X-Force), the weight of murder for the greater good (see again: X-Force, Uncanny), and for good measure, whether there’s a God and if souls are real. 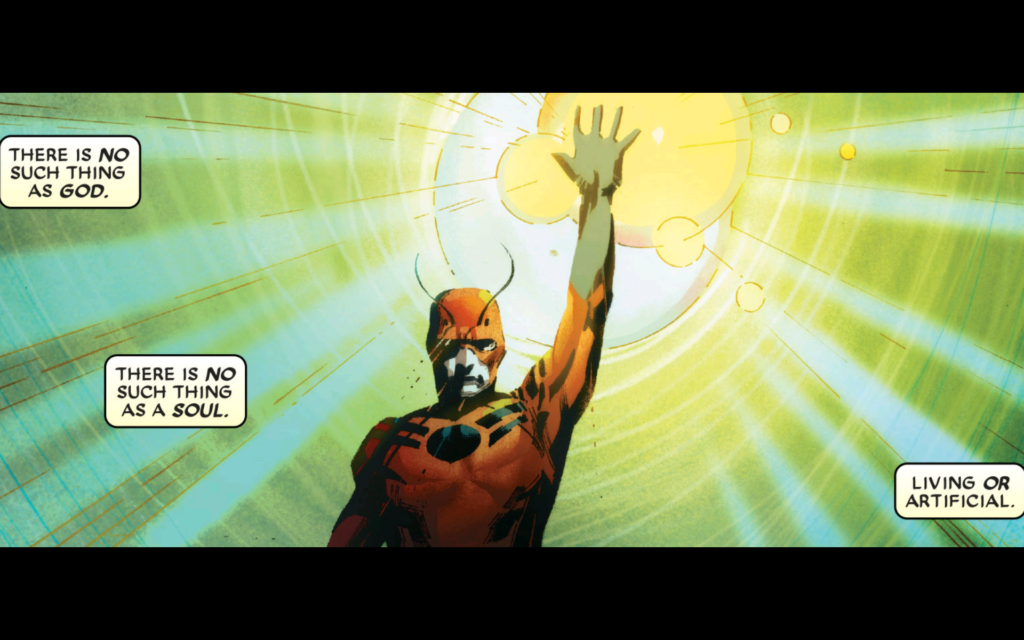 This could all feel very ham-fisted, and if you’re fresh off a Philip K Dick-binge, hey it still might, but I think Remender’s writing here is extremely strong. I’ve enjoyed much of his Marvel Comics work (Punisher, Uncanny X-Force a third time, Uncanny Avengers), but his work on Axis was tremendously disappointing. While Avengers co-consipirator Jonathan Hickman was able to seamlessly integrate the Infinity event into his run, Remender clearly stalled trying to make an event like Axis flow into his otherwise excellent comics.

Rage of Ultron is a fresh reminder that he’s one of the most talented writers in the game, and with Jerome Opena giving the book his personal sense of style of dystopia, it’s a worthwhile read all around. Recommending Ultron stories for new readers before Age of Ultron (movie style) hits theaters hasn’t been easy. Rage of Ultron changes that. Submit or perish.