With Marvel’s Age of Ultron mega-event in full swing, it’s the perfect time to catch up on the history of Marvel’s most diabolical Android (sorry Awesome Andy).

I’ve spent plenty of blog-time wishing Marvel would better integrate their events and press with Marvel Unlimited, so it’s time to give credit where credit is due: the April newsletter highlighting the history of Ultron is FANTASTIC.

Suggested Ultron reads with quick links for MDCU subscribers is exactly the kind of integration Marvel Unlimited needs to maintain a viable subscription base. Having just read Age of Ultron Book 1, I’ll admit I was very ripe to the suggestion of more Ultron stories. (Did Marvel take advantage of my ripeness to suggestion, and should I call a lawyer? That’s a discussion for another day.)

With that praise in the books, I do feel it is my sacred duty as unheralded (heh) keeper of the Marvel Unlimited flame to point out some… oddities with Marvel’s list (Ed: This list is now expired. Looks like CBH wins! ~ Dynamite Dave).

As I do so, I’ll also add on my own all-time great Ultron stories, with quick links to either the Marvel Digital Unlimited comic issues or the Amazon trade (read what feels right to you, you know? It’s 2013).

The Comic Book History of Ultron 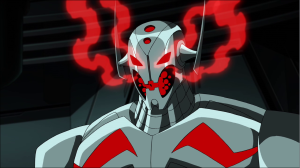 So technically, Marvel is a little misleading stating the ‘Birth of Ultron’ occurs in Avengers #58.

Ultron’s first appearance actually takes place (rather mysteriously) in Avengers #54. The Full-fledged robot of revenge will take shape in issue #58, along with every Marvel fans favorite advocate for android/human marriage, The Vision.

Don’t let all the focus on the Vision throw you, though. These issues will conclude with the startling revelation as to Ultron’s origin.

The Return of Ultimate Ultron

In typical arch-villain fashion, Ultron returns to plague the Roy Thomas written Avengers a mere eight issues later, this time covering himself in adamantium, upgrading to Ultron-6, and referring to himself as Ultimate Ultron.

Aside from confusing future generations of Ultimate Marvel Universe readers beyond repair, Ultron also proved himself ahead of the curve employing Apple’s strategy of rebranding similar devices every few months. The Ultron Intelligence would continue to upgrade its number series in the future.

Avengers: The Bride of Ultron

I’m not going to sit here and pretend I understand why Ultron was trying to get married. That’s just not something I’m prepared to do.

Nonetheless, I’m excited to read this one. I see only two options here: Surprise gem in the rough, or laughable gem full of unintended hilarity. Either way, I’m in.

There’s a lot to love about Ultron’s role in the Beyonder’s Secret Wars.

For starters, Ultron winds up reprogrammed by one Dr. Doom, which would have been like Steve Jobs configuring your ring tone. And then there’s the fact that Ultron breaks the leg of a hero that should NEVER have his leg broken. It’s a borderline impossibility and Ultron does it like it’s nothing. Let’s take a moment to celebrate that achievement with the best animated Ultron quotes.

Ranks up there with Busiek’s Avengers Forever as one of the best late 90’s Marvel story arcs, and does a nice job retaining core character traits and continuity so far removed from the original source.

If there’s one thing we’ve all thought, it’s that we really need an Ultron that can turn a man on.

Wait, no one’s ever thought that? Doesn’t matter – Brian Michael Bendis and Frank Cho (of Frank Cho draws sexy women fame) gave it to us anyway.

The events of Civil War spawn the need for the Mighty Avengers (not to be confused with the New Avengers), and their first assignment is a devastatingly powerful Ultron. It’s one of the most recent takes on the villain prior to Age of Ultron.

This is probably the most unfortunate miss on Marvel’s largely awesome list. Ultron’s role in Annihilation: Conquest is just about the coolest. I mean, it’s ice cold. His crazy robot sentience has no business in an Annihilation follow-up, and yet there Ultron is guiding forces of devastating destruction across the galaxy.

I’d note that Annihilation: Conquest features prologue tie-ins starring Starlord, Wraith, Someone and this one-shot prologue. Conquest also ties-in with issues #4-#7 of Nova. All are available in Marvel Digital Unlimited.

This is without a doubt the coolest inclusion from Marvel’s Unlimited e-mail suggestions. I didn’t realize this prologue issue existed previously, so nice to go back and check out the foreshadowing that will bloom into the beautiful and harmonious Age of Ultron.

For the full event reading order.

The Trial of Hank Pym

This isn’t an Ultron story specifically, but “The Trail of Hank Pym” is an interesting peripheral read for the biggest of Ultron or Pym fans.

Given that trades nowadays are usually six issues deep, this is a pretty hearty collection, which always makes a fun one to hold (just ask my Simonson Thor omnibus). Also, most of these issues are not currently available via Marvel Unlimited subscription.

You might want to loosen up your hamstrings for this one, but technically Brian K. Vaughan’s Runaways features some Ultron tie-in action. I’d clarify here that technically I also think I’m an athlete, so judgment is worth second-guessing.

So what do you think? Any all-time great Ultron stories that need to be on this list? Here’s to hoping Age of Ultron earns the mark when all is said and done, and happy reading!