.
You are here: Home / Featured / Iron Fist Reading Order – Where to Start With Iron Fist?

Iron Fist is a fascinating Marvel Comics character, born during the height of 70’s Kung Fu obsession, smoothly transitioning into the best partnership in Marvel with Luke Cage, and punching his way back into relevance with a delightfully supernatural reinvention of Kung Fu for the 2000’s.

Due to his “fringe” status, and later creation (compared to the major Marvel heroes of the 1960’s) reading through Iron Fist appearances is reasonably palatable endeavor. Most fans today will point you straight to Immortal Iron Fist

(and with good reason), but that approach will miss out on Chris Claremont and John Byrne comics (the creative team responsible for the X-Men’s Dark Phoenix saga

, among other greats), as well as a perpetually underappreciated Heroes for Hire run during the 80’s.

I’ll admit one of the major surprises for me reading every year of Marvel Comics in order (as part of My Marvelous Year!) was finding Chris Claremont and John Byrne Iron Fist stories!

While I’m well-versed in the duo’s X-Men output (some of the best Marvel Comics of all time!), I had no idea the duo was crafting Danny Rand as early as 1975. Credit where it’s due of course to creators Roy Thomas and Gil Kane for launching Iron Fist in the pages of Marvel Premiere.

The Claremont and Byrne era extends for issues #1 through #15 of Iron Fist, and shockingly includes the very first appearance of Wolverine villain Sabretooth!

If you’re a true Iron Fist completist, you’ll also want to include Iron Fist’s appearances in The Deadly Hands of Kung Fu, all of which can be read prior to Iron Fist #1.

Luke Cage and Iron Fist team-up for the first time, naturally in the hands of creators Chris Claremont and John Byrne.

For a good long while, the middle stretch of the Power Man and Iron Fist run was only collected in black and white essential editions. This is beginning to change as Luke Cage and Iron Fist make their way to Netflix, as evidenced above.

A minor stretch, but John Byrne’s early 90’s Namor includes a good deal of Iron Fist for those looking to continue the conclusion of Power Man & Iron Fist #125.

Issues: Namor the Sub-Mariner #10 to #18 (series continues to issue #34 with Iron Fist relevance).

As you’d expect, this is a more closely connected part of the Luke Cage reading order, but beginning with issue #9 of Cage, Iron Fist makes a slight return.

Is Maximum Carnage an Iron Fist story? Nope, certainly not. Nonetheless, Danny Rand makes several regular appearances in the back half of the most 90’s Spidey event comic.

Iron Fist: The Book of Changes

In 1997, Marvel got Suicide Squad co-creator John Ostrander to write another concept-oriented team, the Heroes for Hire.

While Ostrander’s Suicide Squad is far superior, the late 90’s Heroes for Hire represents some of the most Iron Fist focused comics of the decade.

Note the 5 part tie-in crossover with Quicksilver, and yes, note that Quicksilver indeed had his own series in the late 90’s.

Marvel testing the waters with a whole bunch of Iron Fist minis. 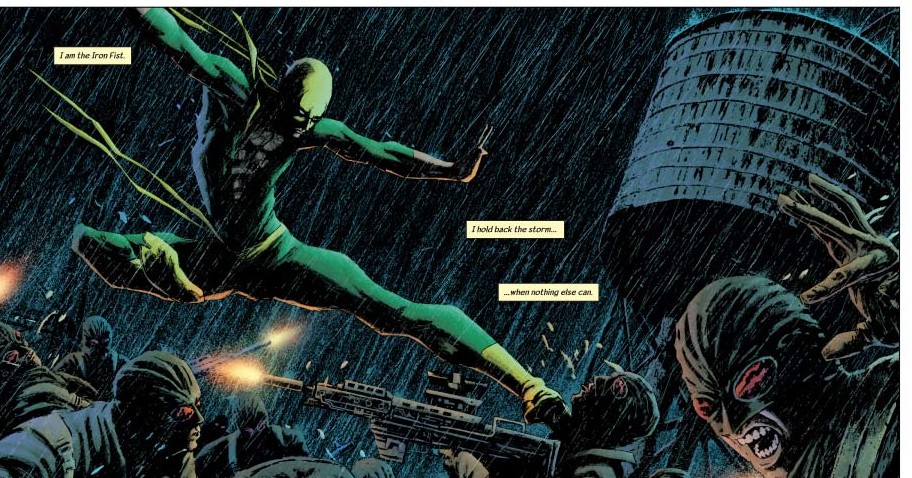 Another highly recommended read that works best (as you’d expect) in the Daredevil reading order.

Nonetheless, there are a handful of cool “Luke tells Daredevil what’s up” scenes, such as in Daredevil #38 (the start of the “Trial of the Century” story arc). It’s a strong series overall, but this issue helps put Luke, Danny and Matt’s interactions into context.

Daughters of the Dragon

Issues: Daughters of the Dragon #1 to #6

Daredevil: The Devil, Inside and Out, Vol. 1

Again, this will all add up a lot more clearly as part of the full Daredevil reading order, but the first arc from Ed Brubaker and Michael Lark on Daredevil is important to Iron Fist, and explains his involvement (as Dannydevil) in Civil War.

Iron Fist is not a major player in Civil War, but it’s worth noting the event occurs here, and sets the stage for much of Danny’s involvement with the New Avengers to come.

Many comic book readers will tell you that if you read one Iron Fist story, it should be Immortal Iron Fist, and they’d be right. This is easily the best starting place for new readers, with a knockout creative team of Ed Brubaker, Matt Fraction, David Aja, and Matt Hollingsworth.

The follow-up to the Brubaker, Fraction and Aja years is significantly underrated, and maintains a very consistent level of quality to the preceding books.

Danny Rand’s in and out of the New Avengers tie-ins during Secret Invasion (full reading order linked above).

Iron Fist is a full-fledged New Avengers during Marvel’s Heroic Age. The below issues #14 to #16 will take you through the Fear Itself event.

Another Daredevil event with a healthy dose of Iron Fist mixed in. Focus on the “Power Man” tie-ins in the reading order linked above.

Heroes for Hire: Fear Itself

As mentioned during New Avengers, you can find the full Fear Itself reading order here.

Power Man and Iron Fist: The Comedy of Death

Danny and K’un Lun play a reasonably significant role in A v X – Danny Rand is most prominent in the New Avengers and Avengers tie-ins referenced in the Avengers vs X-Men reading order linked above. 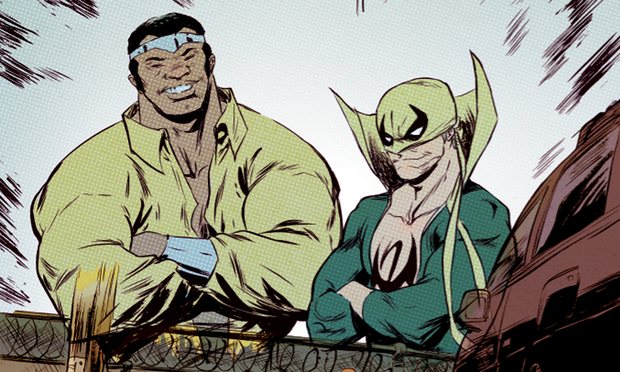 Power Man and Iron Fist Vol. 1: The Boys are Back in Town

As you’d expect, this takes place during the Civil War 2 reading order.