This is potentially controversial, and may require a more detailed write up at some point, but pound for pound, I’d argue Daredevil has the most consistently excellent modern solo series of any Marvel hero. When you think about the greats that have blessed Matt Murdock with all time great, era defining runs (Miller, Nocenti, Bendis, Waid) it’s downright startling.

As Daredevil’s Netflix series renewed interest, finally giving us the savior of Hell’s Kitchen we’ve been waiting for, you can read up on the essential Daredevil comics from his origin to present day.

I’d also recommend our Punisher and Elektra reading orders for those seeking even more comics! 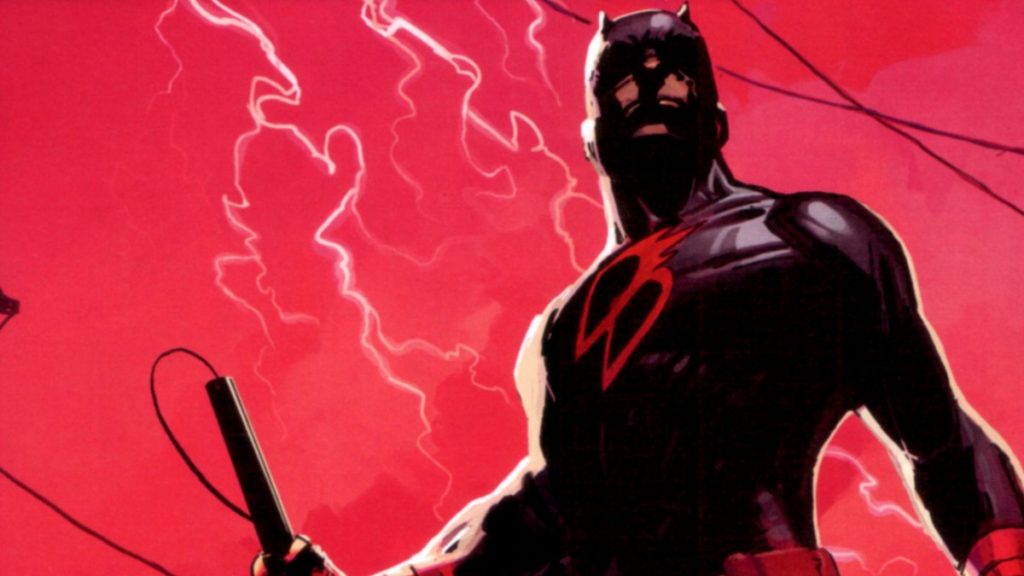 You’ll undoubtedly note that my early Daredevil Origins section is fairly sparse. Nothing against the hornhead’s 60’s origins, but I’m not going to lie: most readers will want to get the origins and jump ahead to the Frank Miller era that defines the character we see today.

The first issue of Daredevil impressively tackles all of the familiar Daredevil origin beats we know and love. It’s impressive just how much of Matt Murdock’s beginnings are captured in that one issue, as well as the number of Daredevil foes we quickly see introduced in those first 11 issues (The Owl! Purple Man! Stilt Man!!!).

It’s worth noting that the four issue Battlin’ Jack Murdock miniseries was published in 2007. Nonetheless, it’s all flashback, and works best as some surprisingly touching fill-in detail surrounding Daredevil’s origins.

Frank Miller’s run on Daredevil lasted for less than fifty issues (plus two trades), and yet it it introduced virtually everything we know about the character today. The importance of his dad, the way his powers work, his involvement with characters like Stick, Elektra, the Kingpin, Bullseye, and the Hand. It’s all here. (Side note: This is also where Frank got a lot of his ideas for his iconic run on Batman.)

Daredevil: The Man Without Fear

Daredevil: The Fall of the Kingpin

The follow-up to Daredevil: Born Again.

I’m not a Fall From Grace fan, but it does come up as one of the more well known Daredevil and Elektra storylines of the mid-90’s.

Joe Kelly is most well known for his 1997 kickoff to Deadpool (DD and Deadpool even crossed over for an annual issue!), but many people forget he was also writing one of the last Daredevil runs before the series rebooted with Marvel Knights.

III) Daredevil in the 2000’s: Kevin Smith and Marvel Knights

This, more than Punisher, was what launched Marvel Knights. It was mature and really explored Matt’s faith and expanding off that by delving into why he is so drawn to what’s dark and mysterious in the world.

Bringing Smith on was really controversial at the time as he was known as a comic fan, not so much a writer. But he surprised a lot of people with this run and there are still parts of it that are surprisingly good. Unfortunately, there are also some Kevin Smith tropes in here that don’t age quite so gracefully. Like his terrible handling of Karen Page and his obsession with Bullseye.

This is not the first time Punisher and Daredevil have crossed paths, but for my money, it is the definitive event. The first time on paper we see the lengths to which they’ll go… and just how much Frank respects Matt.This brief encounter sets up at least three future arcs — entire storylines — for Daredevil comics and should be considered essential reading.

Daredevil Vol. 2: Parts of a Hole

If you’re going to read only one run on Daredevil, this might be the best place to start. Because this is not a Daredevil book… this is a Matt Murdock book, and it is incredible. Bendis absolutely turns Murdock’s life upside-down and keeps him off-balance the entire arc. For a decade of real time. (It’s amazing Marvel let him do it in the first place.) The end result is that the whole run both builds on continuity without requiring it for reading. Instead, you just build a life with this character while his falls apart.

Technically, Elektra shows up in Daredevil’s solo series prior to the completion of issue #40 (the completion of Bendis and Maleev’s book 1). If you really want, you could start reading Elektra around Daredevil #30. Personally, I’d just fill in the solo Elektra if you’re so inclined.

Just to put this in perspective, the series was written during the Elektra solo movie years. I know, I tried to forget as well, but our past is always with us.

Ed Brubaker does his best picking up the pieces of what Bendis had left for him. Brubaker does an admirable job adding black humor to the book and giving Daredevil allies at a time he feels his most alone.

Blood of the Tarantula

If we’re being generous, Shadowland was meant to elevate Marvel’s “street level” heroes. It’s the story of what would happen if Matt Murdock took control of the hand, and how it would impact the community. But really, if we’re being honest, Shadowland exists to “fix” what Bendis did with the character so that Netflix could have TV shows about these heroes. Naturally, that “fix” wasn’t taken well by fans, and so we don’t talk much about “SECRET WAR: NETWORK BOARDROOM MEETING.”

As far as I can tell, this issue is out of continuity. Potentially fun read, though.

Captain America inspires, Spider-Man hopes, Deadpool memes, Daredevil suffers. Suffering has been the emotional core of the Daredevil book ever since Frank Miller rescued him from the ash heap. His catholic guilt tormented him. His body betrayed him. His loved ones were hurt because of him. His whole life was a disaster, at all times. That is until Mark Waid got a hold of him.

Waid took a lot out of those early, pre-Miller books and built a Matt Murdock who could struggle with him demons… and win. Best of all, this is a decision within the comic. Murdock makes the choice to see the light. But is it an act? Is it just him running away from his problems?

Not a typo. Some of Daredevil’s most recent exploits -and Axis tie ins – occur within Superior Iron Man.

Daredevil Vol. 3: The Daredevil You Know

Daredevil: Back in Black Vol. 1: Chinatown

Daredevil: Back in Black Vol. 2: Supersonic

Daredevil: Back in Black Vol. 4: Identity

This is a story told from Wilson Fisk’s point of view. (Not to be confused with the Frank Miller run of the same name. )

Another story told from the villain’s POV.

Daredevil – Back in Black, Vol. 5: Supreme

Marvel returned to classic numbering with these issues. Don’t worry, it DOES take place immediately after issues #21-25

While Daredevil is busy taking down Mayor Fisk, who’s guarding Hell’s Kitchen? Typhoid Mary takes her shot at claiming the Burrough… and comes up against some surprising resistance.

Soule writes this story of Daredevil and Misty Knight searching for Wolverine.It contains information crucial to Daredevil’s main story at this point.

Daredevil Back in Black, Vol. 8: Death of Daredevil

Cates, Rosenberg, and a bunch of other great names get the band back together.

Man Without Fear: The Death of Daredevil – By Jed McKay

With Daredevil presumed dead, the heroes of Hell’s Kitchen mourn their fallen friend. And come to fear someone new…

War of the Realms (event)

Matt Murdock becomes The God Without Fear in this spectacular epic tale.

The below team-ups span various eras of Daredevil’s history, and don’t have to follow the preceding section of comics!

Spider-man and Daredevil have been fast friends since the 60s, giving writers some fantastic banter to work with while their artists draw high-flying adventure.

Written and illustrated by Frank Miller

Daredevil defending Venom. Larrry Hama at his most Hama. So much 90s.

Daredevil and Spider-Man are forced to protect the King Pin.

Bendis, Jenkins, Gale & Mack telling some great tales… some of which involve Stilt-man

The King Pin is gone… but Deadpool is here?