.
You are here: Home / Featured / 10 Best Comics To Read With WandaVision!

Obviously there are pretty darn good reasons for it (*gestures at… everything*), but it’s been an amazingly long time in media years since Avengers: Endgame and Spider-Man: Homecoming ended MCU Phase 3. Here we are a year and a half later, and it’s time to kick off Phase 4 proper with WandaVision on Disney+, the first MCU foray into episodic streaming (shouts to Agents of SHIELD, Agent Carter, and Marvel Netflix for lingering in “is this MCU?” limbo for years!).

Whether you’re prepping for the show’s launch, binging between episodes, or catching up after the whole season has concluded, it’s a great time to dig into Scarlet Witch and Vision comics throughout Marvel history. Now, based on trailers alone, WandaVision is clearly heavily influenced by Tom King and Gabriel Hernandez-Walta’s Vision

, and, if you’re to believe the cottage Easer Egg industry, the reality-warping possibility of the 2005 Marvel event House of M.

While these are discussed below, I’ve also included a boatload of other stories that I think will better explain who these characters are, what their lives have been like in the Marvel Universe, and stories that I think offer clues for where WandaVision may be heading. Please note the stories are included in chronological order through the Marvel timeline, as opposed to any order I’d recommend them.

Without further ado, here are the best comics to read with WandaVision! 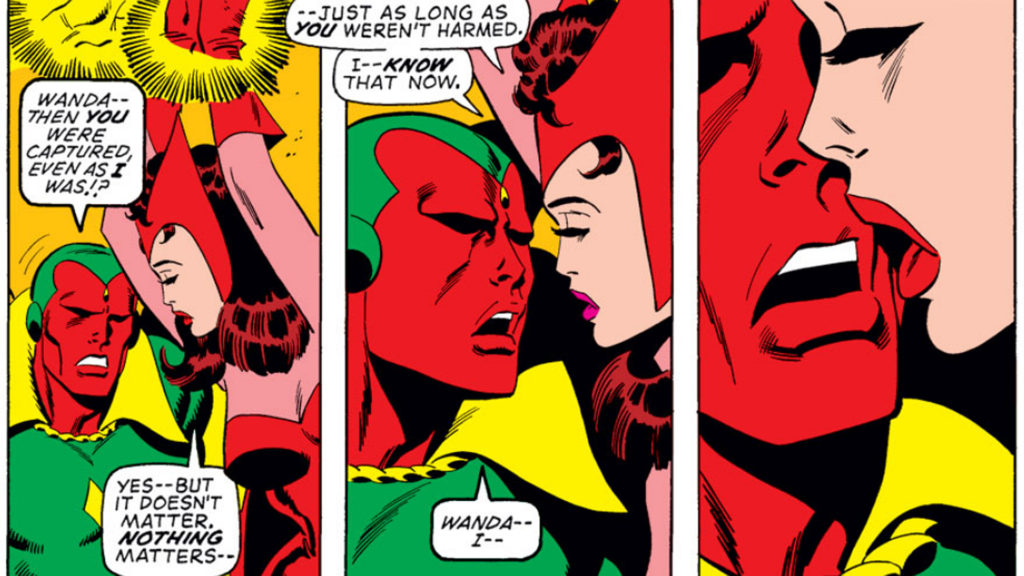 I’m pretty confident you won’t find this on any other WandaVision list, namely because it’s a deep cut from the My Marvelous Year club’s journey through Marvel in the 1970s.

Most lists about Wanda and Vizh start with the couple’s marriage, but for my money, you honestly miss out on the most interesting parts this way, which is the formation of their relationship and the world’s reaction. Avengers #113 by Steve Englehardt and Bob Brown begins with Wanda and Vision already head over heels in love, making out during rescue missions, and dealing with the bigoted hatred that their “unusual” love foments. It’s a harrowing, strong metaphor for bigoted reactions to queer or interracial marriage in what remains an all-too-real threat of domestic terrorism.

It’s also worth noting for new readers that not only is Vision an android, but Wanda Maximoff is a mutant, dating back to her introduction as part of the Brotherhood of Evil Mutants in X-Men #4 by Stan Lee and Jack Kirby.

Technically the linked collection here begins with the wedding of Wanda and Vision in Giant-Size Avengers #4, but that doubles as the conclusion the ‘Celestial Madonna Saga’ in the pages of Avengers. Throwing a newer reader headfirst into the ‘Celestial Madonna Saga’ is arguably comics rec malpractice, so don’t say I didn’t warn you! At the end of the day for WandaVision fans, the crucial outcome is that Vision and Wanda officially tie the knot, setting the stage (a few years later) for their suburban married life (or as I like to call it, v relatable).

“Dark Wanda” technically predates even the X-Men’s “Dark Phoenix Saga,” with this story by Mark Gruenwald, Steven Grant, David Michelinie and John Byrne featuring a Scarlet Witch possessed by the demon Chthon. Not yet a trope, tying Wanda’s possession to the dark magics of Marvel’s Darkhold is a standout story from 1979 Avengers, a story that also explores the Maximoff’s impossibly messy origins!

While creators tend to fall back on Wanda’s mental instability and dangerous powers (to the point that it’s now – as we’ll see below – her defining feature), “Absolute Vision” is unique because it instead looks at a time the Vision became the Avengers ultimate threat. I really love this Roger Stern era story that acknowledges just how powerful Vision is and could be, and reminds us that Vision was created by flippin’ Ultron!

During the 1985 Vision and Scarlet Witch

twelve issue series, Wanda uses her mutant hex powers and chaos altering magics to help her and Vision produce two twin boys, their sons Billy and Tommy. Following up on his contributions to both Wanda’s Chthon possession and “Dark Phoenix Saga,” John Byrne then took over West Coast Avengers and set out to use Wanda’s “impossible” children as a means to heartily destroy the WandaVision family. This is not only a necessary pre-read for 2004’s Avengers Disassembled, but perhaps the defining entry in what would become of Scarlet Witch from 1989 forward.

When I originally put together this guide, I intentionally left out the Abnett and Lanning miniseries (the Scarlet Witch’s first solo title!), thinking “Nah, that’s too weird, no way this comes up.” So naturally, head writer Jac Schaeffer and the WandaVision creative team found a way to make it an integral component! This is one of the things I love about the MCU, the ability to take inspiration from a wide variety of comics, and weave them all together in unexpected combinations. 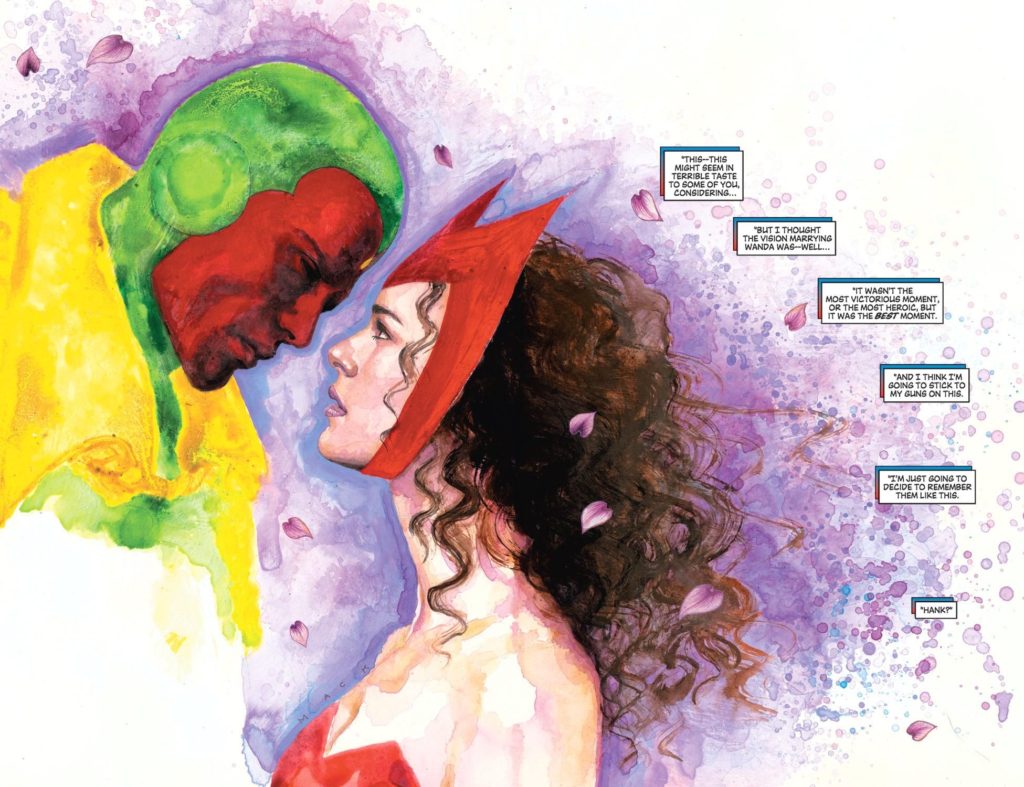 Turns out having your family deconstructed to “unreality” right before your eyes, not to mention multiple demonic possessions, leaves a lingering trace of instability and PTSD in a longtime Avenger. In this case, the very fabric of the Brian Michael Bendis era of Avengers – which runs from 2004 through 2012 – is predicated on the events of Avengers Disassembled and House of M.

While House of M does effectively tap into Wanda’s reality altering abilities, a key feature of WandaVision, it also makes the most sense with the preceding history, and isn’t really much of a Scarlet Witch story until Bendis needs another neck to hang an albatross. Either way, nothing defines modern Wanda Maximoff like House of M

For follow-up on Wanda’s status in the Marvel Universe after these giant events, check out New Avengers #26

The solo Scarlet Witch run during Marvel’s nebulous “All-New All-Different” era is a tricky one because artistically it’s extremely compelling, and Wanda doesn’t often get the chance to stand out on her own terms (as evidenced by the fact that this is only her second solo series, following a four issue mini from Dan Abnett and Andy Lanning in 1994!), but as Vishal eloquently explores in his detailed review, series writer James Robinson is – at best – a questionable fit. For me, this is probably a stayaway for fans coming from the MCU (the next entry is a much better read), and a rec for big time Scarlet Witch fans, particularly those interested in her quagmire of family ties and Marvel continuity! 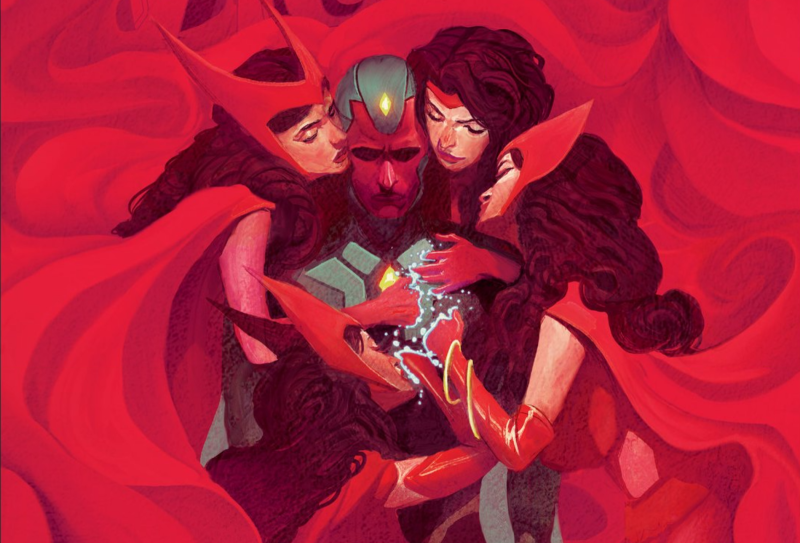 If you can read only one story with WandaVision, it should be Tom King’s lone Marvel work (with incredible, superstar-making art by Gabriel Hernandez Walta), Vision. It’s not only the clear defining influence for the TV show’s aesthetic, but it’s also one of the best Marvel books of the last decade, and my favorite story on this whole list.

In addition to its status as straight up the best Vision story ever told (sorry “Even An Android Can Cry”), Vision does also include some really good Scarlet Witch moments, including a flashback detailing the couple’s romance that is tremendously well done (and foreshadows King’s all-time great work on Mister Miracle).

Avengers No Surrender / No Road Home

While these aren’t exclusively Wanda and Vision stories, I do find it extremely interesting to see the duo together Avengin’ after everything they’ve been through. “No Surrender” and “No Road Home” are massive love letters to all things Avengers, leading to interesting moments for both Scarlet Witch and Vision in the modern Marvel continuity.

Modern Wanda Maximoff has been redefined in the Hickman era of X-Men as “The Great Pretender,” a villain who claimed false mutanthood (Wanda’s mutant status was retconned in 2015’s Uncanny Avengers

) and decimated mutantkind with her actions in House of M.

Whether or not you think this is fair, it’s a fascinating approach to mid 2000’s X-Men continuity, and the role of a longtime Avenger, shorttime no-longer-a-mutant. 15 years later and Wanda stories are still very much grappling with the events of Avengers Disassembled and House of M, despite various stories attempting to move on. It’s high time something was done, don’t ya think? If only Jonathan Hickman were known for having massive long-term plans…