You are here: Home / Featured / Who Watched the Watchmen? Kingdom Come by Waid, Ross, Klein!

In the second issue of Kingdom Come

⁠ — Mark Waid, Alex Ross, and Todd Klein’s DC elseworld magnum opus ⁠— Superman makes his grand return from self-imposed exile in order to respond to a new generation of brutal, erratic “heroes” who do more harm than good. He travels to a seedy dive bar filled with punk rock aesthetics, disrespectful youths, and 90s armor clad brawlers, where we see a cameo of none other than Rorschach, from Alan Moore and Dave Gibbons’ Watchmen. The implication is quite clear: Waid, Ross and Klein are responding to the influence Watchmen has on superhero comics, by taking Rorschach on his face as a violent, morally gray, and compromised hero that represents a new normal. Rorschach in the same room as these characters, where our point-of-view, Norman McKay, calls them “kids,” “monsters,” and “beasts” all before Superman, very paternalistically declares “Party’s over” has the same weight as father coming home to set the children right, crashing their fun and wondering “What happened to the world? Things were better in my day!”

Kingdom Come is a book about paradoxes, and the one at the heart of the story is beautifully laid bare with this cameo: Superman, Batman and Wonder Woman return to a fractured world where superheroes have become the bastard children of Watchmen, where Waid and company seem to be making little to no distinction between where Watchmen stops and its pretenders and responders start. One wonders how much responsibility Moore and Gibbons can truly bear for the (mis)readings of all future works attempting to be in conversation with them, to which Kingdom Come provides no answer other than “yes.” The inclusion of Rorschach is an extremely pointed statement by Waid/Ross/Klein, backed up in later issues when Batman articulates the world’s perspective on the concept of heroism.

Inside this tangled web, the paragons of the DC universe are torn between paradoxes and self-parody: Superman as a beacon of justice becoming a fascist, Wonder Woman an ambassador of peace turning into a propagator of war, and Batman as the epitome of the human ability to overcome now held together by steel and wires. Waid is aware enough to say Watchmen not only changed what kind of stories we tell, not only changed who we tell stories with, but also altered how we understood the stories of our past. We not only create new Supermen, we change who Superman himself is and how we ought to interpret him.

The paradoxes of each character developed throughout the narrative invites the reader to ask not only if these good ideas were corrupted one day, but are these even good ideas in the first place? Was something wrong in the world such that we wanted an all-powerful sun god to save us from every conceivable threat? And did we shoot ourselves in the foot by being blissfully unaware how much that mattered to us, thus making us unable to withstand his departure?

All these questions sound quite engaging, but the story is unsure of who exactly its target is or why we should trust its word for what passes as “good” superhero fiction and “bad” superhero fiction. Two stories are being told here: 1) what exactly superheroes are meant to be, with respect to a world transformed by Watchmen; and 2) who precisely are these characters in the aftermath of a world they chose to leave behind.

The tension, then, is in how Waid chooses to take the meta commentary of superheroics and impose that into the emotional journey of the characters without ever making clear who or what he’s critiquing. Is it Watchmen? Is it the slew of 90s Image Comics edgelords? Is it the readers who have lost their way? Or is it the whole damn system that doesn’t make sense to him anymore? 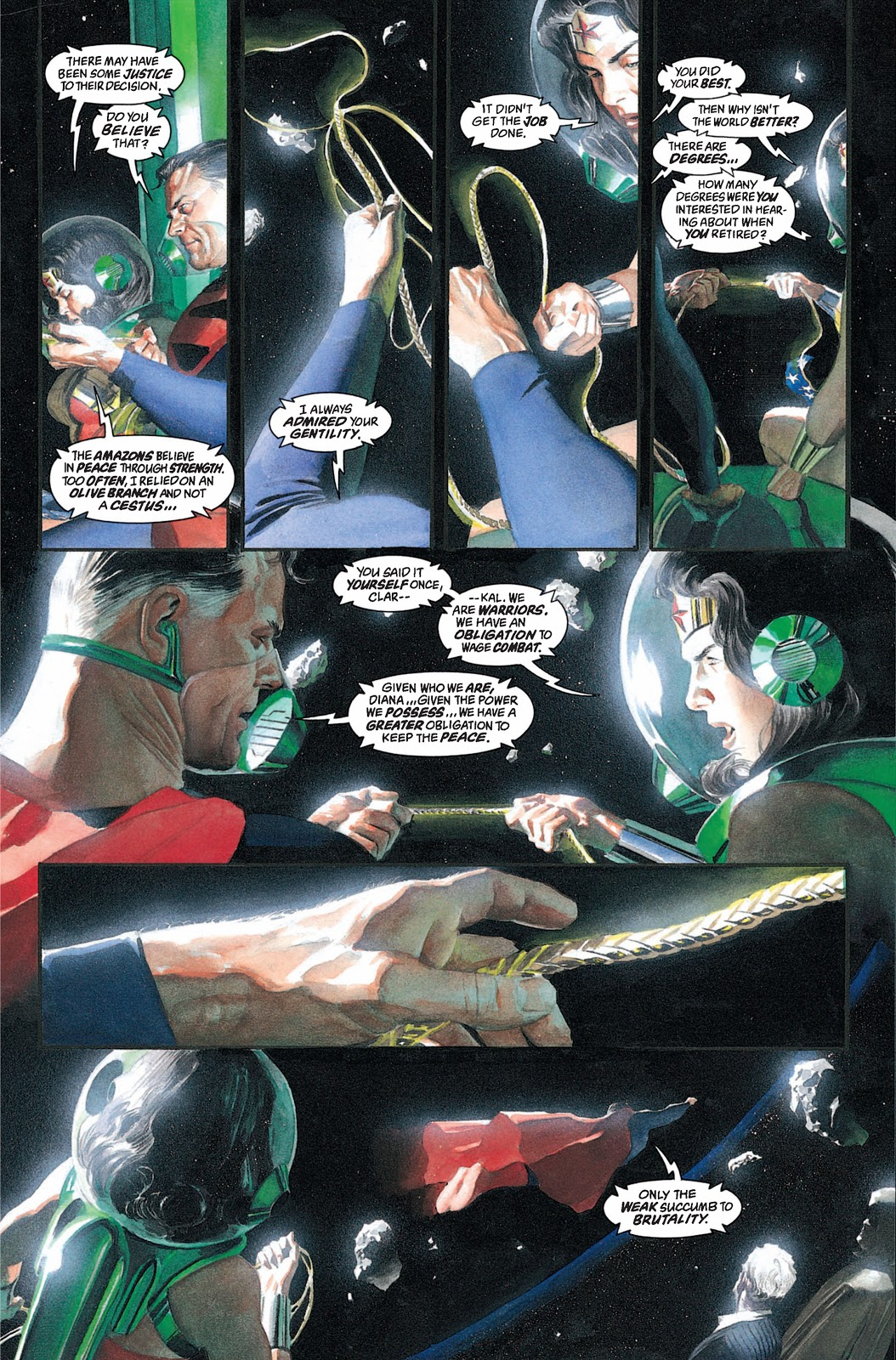 Tracking the influence of Watchmen through culture is a herculean task. What one understands Watchmen to be, the material changes created in the comics media, the people who cite it as their inspiration, and how far exactly that lip service can go are difficult to get your head around. Kingdom Come does not make that task any easier for anyone, as it jams together numerous loose influences and ideas in a collage of what it thinks comics were, have become, and need to be.

You can see very clearly on the page the kind of 90s works that are combined into the new superhero scene. Any one of these new characters can easily slide into an issue of Spawn, Youngblood or The Maxx. At the same time, the Rorschach cameo links the ideas of the Image Universe and Watchmen, where Rorschach is not simply the inspiration for these characters, but rather just another example of the core nihilistic trend Waid is railing against. What exactly the problem is remains unclear, other than the sentiment of gritty, not-my-father’s-superman stories being culturally “bad.” 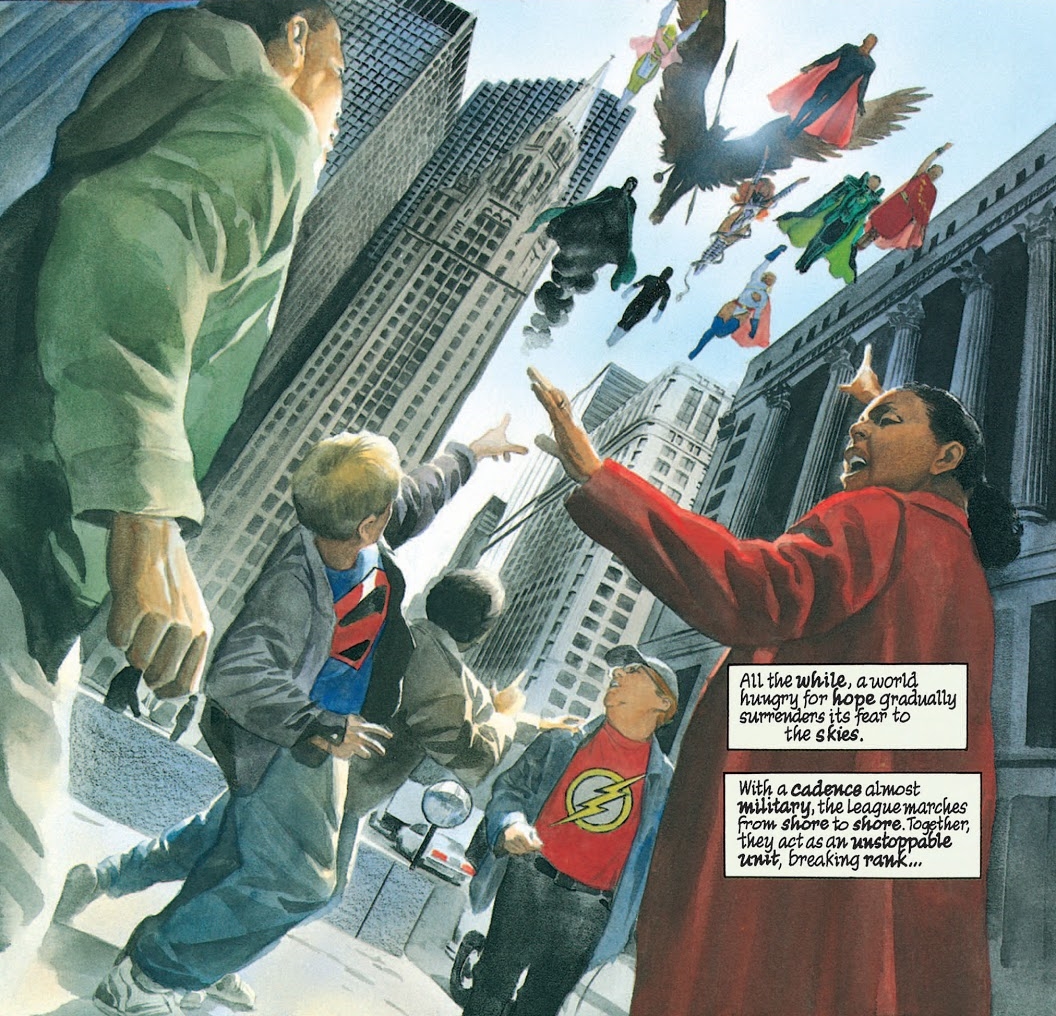 Kingdom Come argues that once individual responsibility is surrendered to superheroes, the world can never progress past the petty threats it faces on a daily level. Superman enters the picture as a goal to strive towards, a concept even he doesn’t fully understand at the start of this story, but his presence over time, and the people who take up his mission in his absence, create an incentive for moral stagnation. No one takes responsibility for who they are and thus Superman imposes it on them through gulags and speeches at the UN. Ultimately, the fate of the metahumans and society itself ends up on the shoulders of Billy Batson, someone who walks in both worlds of gods and men equally, someone who is the bridge between the first generation inspired by Superman and the next generation who come of age without him. Batson making his own choice is the purpose of Superman, in some sense. That being guided by his wisdom and example allows us to make the difficult choices for ourselves, rather than “surrendering our fears to the skies.”

In some ways, Kingdom Come wants to say the world will always need Superman, whether it knows it or not. The series comes just three years after The Death of Superman and Knightfall where both Superman and Batman were taken out of commission and replaced by new characters who channeled the edgier pathos of the era. Ostensibly, the goal of both stories was to demonstrate the value of each character to the world at large: A world without Superman yields a world where others will take up his mission. Or in the case of Batman, breaking the bat does nothing to stop the Batman’s allies, his mission and his will to overcome.

And while the quality and success of each event largely varied, they both painted an optimistic picture about the fundamental character of superhero comics. Superman and Batman are equal parts moral paragons and deeply mortal. The idea of who Superman and Batman are is not pure or embodied constantly, even by them. Rather, they reflect the character of each era and we will always transform them to face down the world with appropriate measure. That transformation might be Superboy and Azrael, or it might just be slightly edgier Clark Kent and Bruce Wayne, à la The Dark Knight Returns

. But either way, the idea lives on through change and growth, not through idolatry of an abstract notion of their eternal morality.

In contrast, Kingdom Come paints a much more pessimistic picture, ironically through its attempt to return optimism to its lead characters. A world without Superman is one of brutality and moral rot. A return of Superman is a return to good old fashion values, values that never go out of style and are always in contention with their present moment. Superman resists the world’s growing negativity because he resists all corruption. That to me feels rather nihilistic. It’s a picture of these characters as if they are not the products of history and context, but rather exist outside of it judging our choices from on high. Waid himself seems to have written a story where he surrenders his fears of a changing world to the skies, in the form of good old Superman coming home to set the world straight.

The deepest flaw of all in Kingdom Come is that it simply can’t seem to decide what exactly it’s angry with, and it lumps together the history of superhero comics from the late 80s and mid 90s into a catch-all that doesn’t give due credit to any of its interlocutors. A common reading of Watchmen is that Rorschach is the coolest, and a common response to that notion is that if you think Rorschach rules, you’ve missed the point of the story. Either side of this debate can be overstated or exhausting, but in the end Kingdom Come doesn’t fall on either side, completely. Rather, it just wants to rail against the idea that Rorschach even exists, nevermind what his function in the story is or isn’t. The book makes no attempt to parse the different ways comics are evolving, it simply resists their evolution wholesale.

Kingdom Come wants to be an epic ode to the righteousness of superheroes in a world consumed by the bleak abyss of edgelords and anti-heroes. But to be perfectly honest, the picture it paints for itself is so ahistorically idealistic that it ultimately slips into the very nihilism it’s seeking to critique. If anti-heroes are nihilistic because they deny the sanctity of life, then Kingdom Come feels nihilistic for denying the complexity of life itself.