You are here: Home / Featured / PREVIOUSLY ON… #52: Titans S1 Review, The State of DC Universe Online, and Comic Book Herald fans being the best!

This week I give Titans season one a final review, think about where DC Universe online is heading, and give a shout out to awesome Comic Book Herald readers! 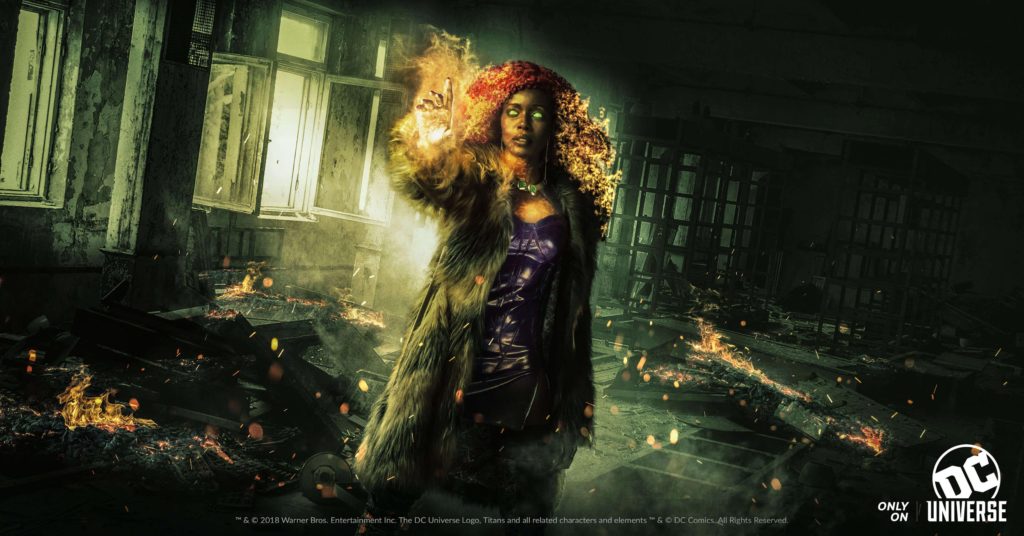 The first season of Titans is not an easy sell.

Honestly, it combines a lot of my least favorite tropes, from slowly developing a reason for the team to come together to literally any plot about Raven being all Emily Rose. Not once during the course of these eleven-odd hours did I care about the villains. Couple that with the laughably off-target “F**k Batman” marketing leading in to the series, and again, Titans is *not* an easy sell.

Despite that, the character-work and the sense of world-building present in the first DC Universe exclusive title make for an intriguing package. At its core, Titans is a crossbreed of comic book television to date, drawing primarily from the Marvel Netflix template with slight scatterings of DC on the CW, and a smart spurt of horror. The “maturity” of the series is made known through sex, violence, and curses. I’m pretty sure Beast Boy ate a guy. Hooray for creative freedom!!!

My favorite thing about Titans is the willingness to embrace more and more of the DCU as the season progresses. Too many comic book TV shows have skirted the in-universe connections that make these worlds so fun, and Titans thankfully takes a page out of latter day Arrow-verse by acknowledging this. It’s more than cameos or the shadow of the bat, too, with Titans integrating Doom Patrol, Jason Todd, Hawk and Dove, and more into their first season.

Likewise, the introduction of Donna Troy is a breath of fresh air, a statement I’ve never uttered about her comic book version. Donna is effervescent and charming, plus she provides the connective tissue to the world of DC’s Justice League. Dick Grayson is never more interesting than he is bouncing off Donna and her lifelong understanding of #sidekicklife.

Speaking of Robin, even done well, little can change the idiosyncratic decision-making that went into settling on this version of Dick Grayson. The Dick Grayson (aka first Robin, forever Nightwing) of modern DC comics is an energetic and confident hero, somehow capable of both filling the shoes of Batman and operating as a “thought-dead” super spy. The Dick Grayson of Titans is just f&*kin’ mad.

It wasn’t planned, but right around the time I was finishing Titans I also caught up on the Tom King written Batman #54 to #57, which is a story about the relationship between fathers and sons (in particular, Bruce and Dick). Without going on too much of a digression, Batman #54 (with art by Matt Wagner!) is one of my favorite entries in the King run, and a fresh reminder what a joyful counterbalance Nightwing can play to Batman’s stunted stoicism. Whereas Batman is toddler-esque in his dedication to saying “no!” to any proposed fun, Dick’s refusal to quit on his mentor and friend is genuinely inspiring.

Needless to say, this is not that Dick Grayson. The most common argument I’ve heard is that Dick can still easily grow into that person – and even by the end of the season we see signs of that progression – but this suggests the showrunners couldn’t have just started there to begin with (perhaps Trigon issued a mandate only they could know).

This may feel like a losing battle (the decision’s been made, just roll with it!), but it’s important because the Titans are at their most compelling without sad-sack Dick. They need Robin’s leadership and strategy, but the core trio of Starfire, Raven, and Beast Boy don’t benefit at all from a side helping of self-loathing. It’s also a meaningful story choice because it means Titans season one is a slow-build origin story, and lordie knows we’ve had a handful of those this decade.

The most fascinating Titans episode is easily E11, with Dick trapped in a “What-If Batman Finally Snapped” elseworld. Going full-on Punisher meets Batman Who Laughs in the series finale is a wild choice (if nothing else, Titans certainly makes choices), and ending a season that inconclusively is just batty. The conclusion is so open-ended I had to look up to make sure this wasn’t a midseason break. According to this interview on Batman-News, the Titans showrunners have confirmed there was an episode 12 originally planned as the finale (now moved as the opener to season 2).

Much like Marvel and Hulu’s Runaways, Titans makes the mistake of infinite patience, and undying loyalty. Stick with us through this season’s build-up and boy howdy you’ll love season two! As a result, Titans can’t honestly be regarded any higher than other live-action also-rans, joining the likes of Luke Cage or Punisher season one as shows that have potential and good moments, but don’t ultimately reward the hours eaten. 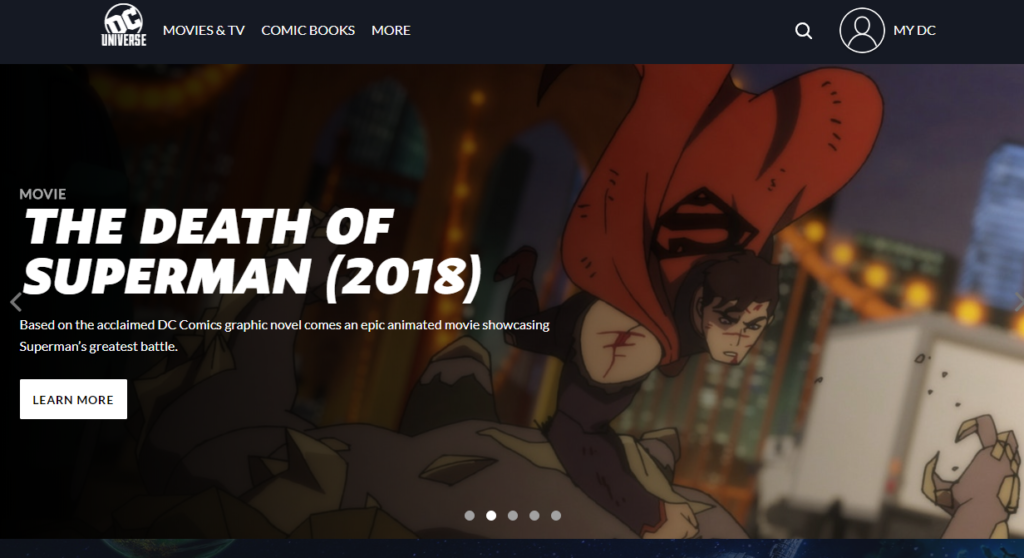 We’re approximately one quarter of a year into the life of DC Universe and it’s easy to forget the initiative is still in its infancy. As you can tell from my review of Titans above, I’d consider the live-action TV streaming a stunted launch, but can’t help but feel excited for Doom Patrol and Swamp Thing in 2019. The absolute best thing for the app’s notoriety is to make the strangest comic book TV available, and they have that opportunity with these properties.

Otherwise, I’d maintain the single best thing about this app is the quick ability to binge DC’s animated series. The launch of Young Justice: Outsiders this week is hopefully a fresh reminder how good DC animated stories can be with the full comics world as their playground.

In terms of comics, I remain surprised that DC launched with over 3,000, but it’s getting harder and harder to defend an approach so contrary to Marvel Unlimited. It feels tremendously spoiled to assert that a publisher should make their library available for pennies on the dollar, but that’s kind of where we are in the economy of digital comics, and media in general.

Look around at comparable apps like Netflix, Spotify, MU, Hoopla, WWE, Shonen Jump… the list goes on! For as long as subscribers pay a monthly fee, there’s an expectation that they have access to the back catalog of content.

I’ve written why I think a “DC Unlimited” would be incredible for years now, but the thing I keep coming back to is how limiting older material squelches fandom. Teenagers can walk out of Into the Spider-Verse and read virtually every comic Miles Morales has ever appeared in via a subscription to Marvel Unlimited. Teenagers can walk out of Aquaman and read the Peter David run, and 1/6th of the first DC Rebirth story arc.

I’m still excited about some of the unique features DC Universe offers. Just this past week the app released a Young Justice: Outsiders #1 tie-in comic (released 1.2.19) by Greg Weisman and Christopher Jones. It’s hardly a stealth classic, but basically, if you’ve been missing “Hello Megan,” this is for you. This is a cool unique idea of combining exclusive comics and TV in a way most services aren’t able to sustain.

Across the board that’s still where we are with DC Universe; there’s potential here, yet to be realized.

I’ve said it before, but Comic Book Herald fans are the best. Seriously. You look around the broader comic book internet, and it’s a post-apocalyptic wasteland of fiery cruelty and close-minded fools. Then I look at the kinds of comic book readers I’m lucky to have as fans on social, or commenters on the site, and it’s everything that makes comic book fandom cool!

Case in point, I’ve made a habit the past few weeks of sharing out new reader requests for help on Twitter. Nothing special, just retweeting pleas for help on where to start reading comics, with the hopes that a few people might take a moment out of there day to provide some ideas.

And every single time, the CBH faithful have come to the side of the newcomer with open arms and tons of great comic recommendations!

The most recent example saw 10 unique recs, across a wide spectrum of possible starting places for a reader new to the Marvel Comics universe. It’s a small moment of helping others enjoy comics that wonderfully fulfills the exact reason I started Comic Book Herald.

So, thank you CBH fans, keep on being great, keep on recommending books, and enjoy the comics!