Guardians of the Galaxy 2 is not for the cynical. Nonetheless, I couldn’t shake a disapppointed cynicism for the movie’s first two minutes.

The baby Groot opening dance number feels like fan-service of the most extreme degree, with corporate overlords counting the toy sale dollars to the tune of Electric Light Orchestra’s “Mr. Blue Sky.” The tiny dancing tree reeked so strongly of “Oh you liked Groot’s post credits dance? Well then you’ll love this!!”

In many ways the song and dance number is the equivalent of X-Men Apocalypse’s Quicksilver slow-mo redux, simply extending a greatest hits rendition because it worked so well the first time.

Except here’s the thing: It’s so much fun.

Sure, adorable Groot is adorable, but the tracking shot of the team’s tiniest member cutting a rug while the rest of the team battles an interdimensional alien monster (that sure looks like the alien monster from Abnett and Lanning’s opening arc on Guardians!) is the perfect tone-setting introduction to this movie.

And let’s be honest, from Doctor Who to Guardians, no cosmic odyssey has ever gone wrong with the inclusion of ELO (said the manly man with the Xanadu soundtrack on his phone).

Whereas Guardians of the Galaxy was an action movie that surprised with comedy, Guardians 2 is a comedy that surprises with just how many times it makes you want to cry. The action will come, of course, but Guardians 2 is absolutely committed to joyful comedy – at least when it isn’t trying to break your heart.

For my money, Guardians 2 is the funniest Marvel movie by a longshot. It’s certainly not the best, and the story lags in fits and starts, but nothing in the MCU has the humorous sweet spots of Guardians 2. Proportionally the jokes swing and miss more than competition like the first Guardians or Iron Man 3, but that’s simply because there are so many of them at such a frenetic pace.

Guardians 2 will undoubtedly suffer from the effects of familiarity, and from an over eager desire to cash in on the tricks that worked the first time around. If you find yourself thinking “Huh, I’m actively being pandered to right now,” well, I was right there with you (not literally, that would be creepy). Nonetheless, there’s no crew in the Marvel Cinematic Universe that earns as many smiles per minute as these Guardians. 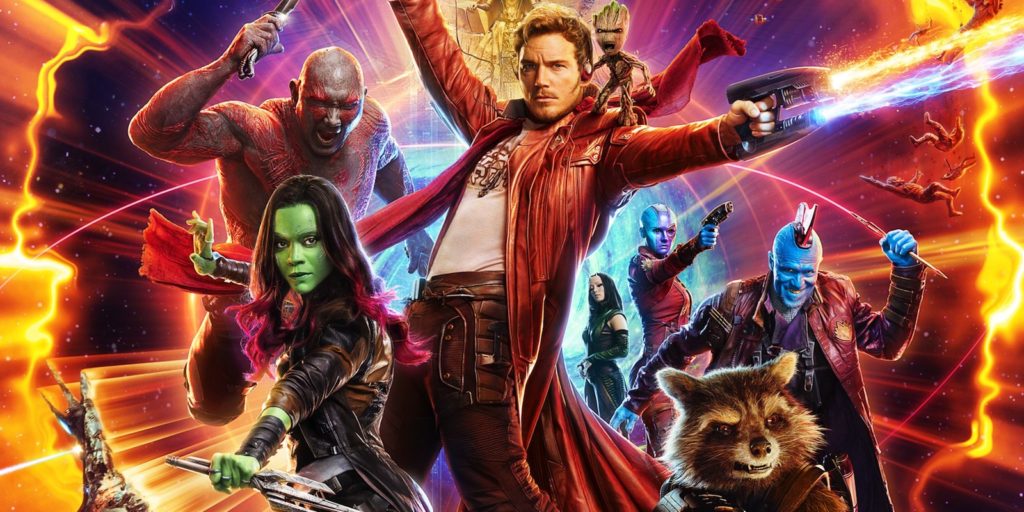 While so many MCU movies are either beginnings, or links in the chain to Avengers: Infinity War, Guardians of the Galaxy 2 gets to simply exist and tell a story. There’s something so gloriously refreshing about even a mildly mundane Vol. 2 story in which the Guardians deal with multiple challenges including Ego the Living Planet, The Universal Church of Truthy Sovereign (I refuse to just call them the Sovereign), and the mercenary Ravagers.

Guardians 2 is more issues #7 to #12 of a comic book series (with no interrupting tie-ins!), or a mid-season episode of an animated comic book tv show, and the film benefits tremendously. There’s absolutely a part of me that regrets missing out on signs of things to come – no Thanos! no Nova corps! no Adam Warlock (kinda sorta)! – but in reality I think the film’s better for it.

The clearest comparison point for Guardians 2 is another sequel, Joss Whedon’s Avengers 2. For many fans, Avengers 2 fell apart under the weight of the larger tie-in narrative. Much Ado (perhaps about nothing) was made over the ham-fisted inclusion of Thor’s Infinity War visions, and while these scenes alone hardly undo the film, they certainly add a weightiness that can be off-putting to viewers. Most of us don’t actually want to hear the sounds of Disney executives rubbing their gold coins.

In addition to avoiding these trappings, the lack of BIG PICTURE narrative means Guardians 2 also does a surprising amount of work deepening the relationships and backstories we had to simply take at face value in the origin. Nebula was a one-dimensional villain in the origin, but here her hatred for Gamora and Thanos is given enough attention that she’s a sympathetic character by movie’s end (even if Drax would still maybe leave her behind). Just as impressive, Nebula’s horrific descriptions of her childhood at the hands of Thanos is the first time the mad titan has felt like a worthwhile villain so far in the MCU.

Likewise, Yondu’s fatherly relationship with Quill, which struck approximately zero chords when I watched Guardians 1, is suddenly the earned, beating heart of Guardians 2. I joked a bit in my classic Guardians comics recaps that reading these as Guardians 2 was strictly for the Yondu-obsessed, but suddenly that doesn’t feel like all that bad of an idea. James Gunn and crew even course corrected to get a properly sized Yondu Mohawk, leading to my favorite Michael Rooker performance since he left his hand behind in The Walking Dead.

As you’ll see below, in my view Guardians 2 is far from a perfect Marvel movie, but it maintains a Marvel winning streak.

20) Iron Man 2
21) You have a very important presentation and a giant pimple decides to open its one-man show directly on your forehead.
22) Iron Fist

Thoughts on Guardians of the Galaxy 2

There are maybe 250 people on the planet who got where the extended Taserface joke was coming from in the comics, and I’d bet 95% of them are My Marvelous Year die-hards!

Ego the Living Planet is definitely one of the most challenging Marvel characters to bring to life in a film with human-sized characters, but James Gunn and crew found a genuinely compelling narrative arc for the mustachio’d planet.

Given the apparent direction to include more cosmic entities in the Marvel Cinematic Universe (it sure seemed like Eternity was at least referenced by Star-Lord), I’ve been happy to see Marvel is less deathly afraid to portray those figures as occasionally cartoonish as they can be in the Ditko and Kirby renderings from the 60’s. Dr. Strange’s Dormammu wasn’t quite as flame-headed as I want, but still that’s a giant cosmic portrayal. Likewise, Kurt Russell’s Ego did eventually become the all-encompassing planet eyes and mouth that’s true to any “Journey to the center of Ego” story. Do I still want to see a flying talking Planet get a rocket strapped to him by Galactus? Of course, but take your wins where you can.

One thing that struck me re-reading the 2008 to 2010 Guardians comics is how much better the team roster is through that series. Obviously, in film, the MCU Guardians simply don’t have the time to develop as many characters, and honestly it’s a small miracle they find character arcs for as many Marvel players as they do. Nonetheless, the absence of Phyla-Vell, Moondragon, and (yes) Adam Warlock continues to leave room for improvement. Those post-credit teasers promise one, so we’ll see how Guardians develops.

It doesn’t get enough credit how Drax has combined the doofus of Starlin’s 90’s Infinity Watch with the modern warrior poet of Giffen, Abnett, and Lanning. This pairing is beyond belief, like mint jelly and lamb.

I haven’t read anything about Guardians 2 in the lead-up to the movie because apparently pop culture coverage now is just one giant spoiler after the other, but if there’s an abundance of “Holy jamoly this Mantis characterization is awful” takes, I join them. The Mantis of Steve Englehardt’s 70’s Avengers is an of-the-time Vietnamese stereotype with literally the most confusing biography in Marvel comics (take a bow Celestial Madonna!), but the updated Abnett and Lanning Mantis is a really interesting precognitive Guardians member.

For the most part, the Mantis of the MCU is the butt of Drax’s “you’re ugly” jokes and a subservient out-of-touch cliche. And hey, I laugh just about any time Dave Bautista’s unintentionally callous savage opens his mouth, so I’m not above the way pieces of this are delivered. Nonetheless, the MCU has a long road ahead if they want to salvage Mantis. This portrayal is an absolute ‘L’ in the Guardians 2 scoring column.

If you want to pick nits, one thing that remains completely unclear to me is what the heck Ego actually did. It seemed like he infested planets across the galaxy, and at a minimum destroyed and killed thousands on Earth, but… nobody really talked about that?

For those of you unfamiliar, the Comic Book Herald ‘There is No Mandarin’ award goes to the Marvel villain most thoroughly wasted in service of the plot. Previous winners include Cottonmouth in 2016, Baron von Strucker in 2015, Ronan the Accuser in 2014, and of course, The (Not) Mandarin in 2013.

We’re only one movie into a trio of MCU films this year, and honestly Guardians doesn’t necessarily waste a villain. I’m not really even convinced Ego is gone, and it would be very easy to decide to bring him back comic book style so Galactus can strap rockets to his back and hurl him into space.

Fortunately for the purposes of the early vote, we had Iron Fist! I don’t care if she didn’t even die in the show, our winner so far is… The Bride of Nine Spiders!

Much to the chagrin of movie critics penning “The Comic Book Movie Bubble Is About to Burst!” articles in 2012, ranking the best comic book movies so far in 2017 is ridiculously hard. If I had to do it – and I really, truly don’t, I bring this entirely on myself – I’d rank them as follows:

Did I just call Guardians 2 the worst movie of 2017? I told you this was ridiculously hard.

The decision to make Quill part Celestial is a really strange one given what we know about Celestials in the Marvel Comics universe. Clearly the space-gods will be used quite differently in the MCU, but I’m not sure how I feel about imbuing Andy from Parks & Rec with the power to make unlimited balls.

I am excited to see Adam Warlock finally enter the Marvel Cinematic Universe, although given the importance of Thanos moving forward, I wonder if we’ll actually see that post-credits tease sooner than Guardians Vol. 3.

On a personal note, my wife and I took our 2 month old to the Drive-In for the little one’s first movie, and our first drive-in movie experience. It was a lot of fun, but it turns out that if you leave your car battery running the radio for the length of Guardians 2 AND about half of Beauty and the Beast, your car may… refuse to start.

A hearty Comic Book Herald thank you and no-prize to the do-gooders who gave us a jump!!

Guardians of the Galaxy comics guide

Marvel is offering promo codes for a free month of Marvel Unlimited through May 10. See how you can combine this offer into 90 days of free Marvel Comics with Comic Book Herald’s guide!.