You are here: Home / Featured / Eternals: To Defy the Apocalypse

The Eternals is easily one of Marvel’s most neglected properties, which is why when announcements for a film version of the comic began circulating, they were usually accompanied by comments like “who the heck are they?” Yet there’s no denying that many of the biggest names in the industry have worked on Eternals stories, from Jack Kirby all the way to Neil Gaiman and beyond. In fact, Kirby created the Eternals after his Fourth World properties were prematurely canceled due to poor sales, which left countless unresolved plotlines for future writers to go wild with. Sadly, this formula was repeated almost to the letter with the likewise canceled Eternals, but, as with Fourth World, the legacy continues on.

The basic premise of the series is that the Eternals are a race that was bred by the cosmic Celestials, ostensibly to protect Earth from the Deviants, who the Celestials… also created. There were around a hundred Celestials but significantly more Deviants, and the Deviants more or less took over the planet until the Eternals stepped in, freeing humanity and granting us basic knowledge. By the time Eternals: To Defy the Apocalypse

rolled around, the Eternals had already enjoyed no fewer than three previous volumes and a handful of one-shots, but this story is often regarded as one of the easiest jumping-on points for readers unfamiliar with the Celestials. 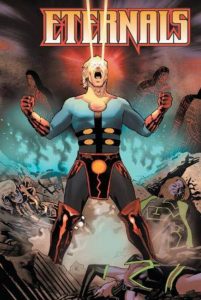 The previous series, written by Neil Gaiman with art by John Romita Jr. in 2006, had been the first comprehensive Eternals story in several years, and it established a new world order for its characters. We found that most of the Eternals had lost their memories and gone dormant, living normal lives amongst humans. However, the de facto leader of the Eternals Ikaris remembered his past life and found his fellow Eternals, including Thena, Druig, Makkari, and Sersi. They help deal with the threat of an awakening Celestial, who, by the end of the series, had taken up permanent residence towering over San Francisco’s Golden Gate Park, standing watch in case the prophesied Horde came to destroy the Earth.

In Eternals: To Defy the Apocalypse, we find that said Horde is most definitely coming, and the Eternals are on the clock to find and awaken their brethren in order to fight the Horde before it’s too late. Meanwhile, the villainous Druig begins tracking down his own small army of Eternals, planning to defeat Ikaris and Thena in order to take the position of Prime Eternal. 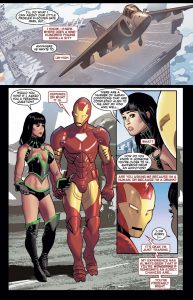 This series doesn’t necessarily break a ton of new ground, but it delves much further into the themes and ideas that were put forward by the previous series, especially the Gaiman run. The sleeping Celestial comes back as a major plot point, discussing the pending threats to the planet with Makkari, who serves as a sort of translator and errand runner. Thena and Ikaris’s fight against Druig comes to the forefront as Ajak and Gilgamesh join the dark side. The Horde plants a spy within Thena’s son, Joey, and they use him to keep tabs on everything that’s happening. Makkari loses himself in his communications with the Celestial, and he is eventually (temporarily) killed by Ajak and Gilgamesh, at which time the Celestial responds by plunging the people of Earth into a deep sleep.

The Eternals interact with the Marvel Universe more than is usual for them, and the series features guest appearances by Iron Man during his S.H.I.E.L.D. and “Civil War” days and the X-Men during the “Manifest Destiny” story arc. These appearances are definitely a little distracting to the basic plot, but they make up for it by being entertaining. Iron Man’s interactions with Sersi are a lot of fun as she repeatedly tells him to mind his own business (the one thing he cannot do). Due to her concern for Makkari, Sersi talks with Tony briefly about addiction, and he gives her some personal advice. Meanwhile, the X-Men mostly show up just to help the Eternals and slug it out, and there is nothing wrong with that. Despite this being a fairly complicated era for the Marvel Universe overall, the Eternals are still able to stand alone while finally interacting with other superheroes. 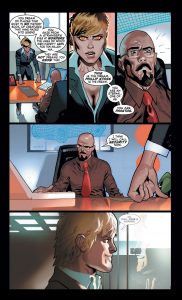 The joy of this specific series, besides seeing how the Eternals interact with other heroes, is the characterization. We learn more about Ikaris and Thena’s relationship than ever before. During a simple opening scene, in a car on their way to attempt to awaken the sleeping Phastos, they bicker over their next move. Thena adamantly refuses to “stoop to Druig’s methods” while Ikaris becomes impatient due to the massive pending threat. She sees the minutiae while he focuses on larger events, which tells us a lot about how these two interact with one another and why she finds him so irritating throughout this series. Later, when her child is threatened, Thena teleports out with no warning, leaving Ikaris to sulk on the side of the road in the middle of Germany. These two are generally portrayed as lovers, but here their relationship is almost adversarial, as Thena consistently has to prioritize for herself. They have the same goals, but totally different ways of achieving them, which adds a lot to their dynamic.

Meanwhile, Sersi is placed in the uncomfortable position of ambassador to the greater world, which sees her engaging and even reaching the point of conflict with one Tony Stark. When Ajak gets violent in public, Stark meets with Sersi to scold her, implies that he would prefer the Eternals to register (back when that was a thing), and finally, exasperated, tries to meet her halfway. Sersi views Tony as a friend, but she also realizes how limited his perspective is, and that frustrates him to no end. 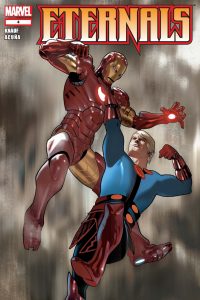 Sersi likewise becomes concerned that Makkari has apparently become addicted to leaving his body and communing with the slumbering Celestial. He pushes himself over the edge and even ends up dead, only to be revived by Sersi and the others, which briefly costs Sersi her life. Her ability to be in all places at once and foresee impending doom is still undercut by the in-fighting amongst her fellow Eternals and the looming threats they face.

Druig becomes more terrifying than ever as he ruthlessly slaughters those that stand in his way, and Ajak’s anger over Makkari’s appointment to the position of communicator manifests in some especially ugly ways, so the threat of the series feels very real. Gilgamesh is resurrected only to beat Makkari, and the death is genuinely painful to read, even if it isn’t permanent.

There is no doubt that major Eternals fans already know and love this series, but it’s also one of the best places to start when it comes to breaking into Eternals lore. The action is solid, the plot works, the relentless cameos don’t sidetrack the story, and the characterization for the primary Eternals is better than ever. If you read the Gaiman series and it left you wanting more, this is exactly the series for you. The downside is that the story feels like a first volume that earned a longer series it never received. As soon as you get into the vibe of an Eternals adventure, the story ends, and the characters go on hiatus again. It’s been said that there will be a new Eternals series launching later this year. Hopefully that will give modern creators a chance to build on what was done here, just as Eternals: To Defy the Apocalypse so expertly did with what came before it.