What do you look for in a story? There are different aspects that speak to me. Tropes or characters or techniques that draw me in. Art’s a big one, of course. Comic images, comic panels, they’re little portals, simultaneously drawing you in and showing you the world the characters inhabit. Cleverness is something I look for. Sometimes a character’s clever, in their speech or actions. Sometimes the plot itself is clever, all the different pieces fitting together, feeding into one another.

But most of all, what I’m looking for are characters. People. People who are true to life, who have motivations, and desires, and needs. Who fear, who love, who have secret thoughts and feelings. People who I relate to, or, if I don’t relate to, who I recognize. Ed Brubaker and Sean Phillips’ Criminal delivers on every one of these points.

The centerpiece of Brubaker and Phillips’ career, Criminal shouldn’t carry any surprises if you’re familiar with their other work. Brubaker’s worked on Batman, Daredevil, and Captain America, carrying noir sensibilities into the realm of superheroes. He’s put Matt Murdock in prison, dealing with genuine moral and legal problems in the process. He’s shown cops in Gotham city having their lives made miserable by some bat-freak who ignores due process. And, he co-created the Winter Soldier. And as for his creator-owned work with Phillips, there are vigilantes haunted by demons, an immortal femme fatale hunted by Lovecraftian horrors, and a supervillain in witness protection.

The noir themes, the eye for character and detail, and the moody atmosphere developed between Brubaker and Phillips, they’re all brought together in the world of Criminal. Each story is stand alone, yet they build on one another, fleshing out the world, the families, the histories. The first Criminal Deluxe Edition collects the three arcs that introduce us to Criminal, and the inhabitants of Center City.

Like the best of introductions, “Coward” gives us all the information we need while never feeling like an introduction, existing as a full story in its own right. Leo has been a pickpocket since he was eight years old. When his dad went to prison, his uncle Ivan took care of him. Now, Ivan’s got dementia and a heroin addiction, and it’s Leo’s turn to take care of his uncle. 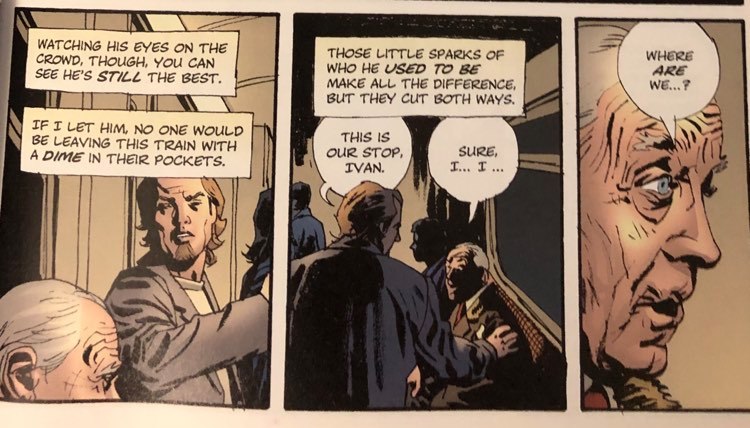 Leo is the titular coward. The crimes he commits are low risk, but they’re also low reward. Because if something goes wrong? He’ll end up like his dad. He’ll end up in prison. And like his dad, he’ll die there. So, naturally, we get a lovely heist story, where Leo is coerced into a situation full of variables he can’t control and danger he isn’t prepared for. And this is where the reader gets to see Criminal for what it is.

Because not only does the heist not go as planned, but we see the heist isn’t central to the story. What’s central is Leo taking care of his uncle Ivan. What’s central is Leo and Greta, the woman helping with the heist. And what’s central, what defines who Leo is and what he does, is the past. His father went to prison for the murder of Teeg Lawless. In this story, as in most of Criminal, Teeg isn’t seen. In this story, as in most of Criminal, the history of Teeg, his life and death, shape the lives of everyone involved. What’s central here isn’t the crime, it’s the criminals. It’s the relationships between the characters, and the way each one is haunted by the past.

Some works carry an unrelenting bleakness with them. I imagine the creators, sitting at their desk, rubbing their hands together, confident in the fact that, if they send every tragedy imaginable to their characters, they’ll win some sort of award. They’ll be lauded as “daring” and “unflinching”. If the creators make it clear their character is always suffering, someone will call them “mature”, and they’ll know they accomplished something. But this isn’t the world Brubaker and Phillips create.

There’s sadness and suffering, sure. There are characters haunted by the past. But also? There are human connections. Real ones. Criminal is populated by characters who love and help each other. And if the love and help is imperfect it’s no less genuine for it. Ivan? He’s a junkie with dementia. But we, like Leo, get to see flashes of who he was, and so we, like Leo, grow to care about him. 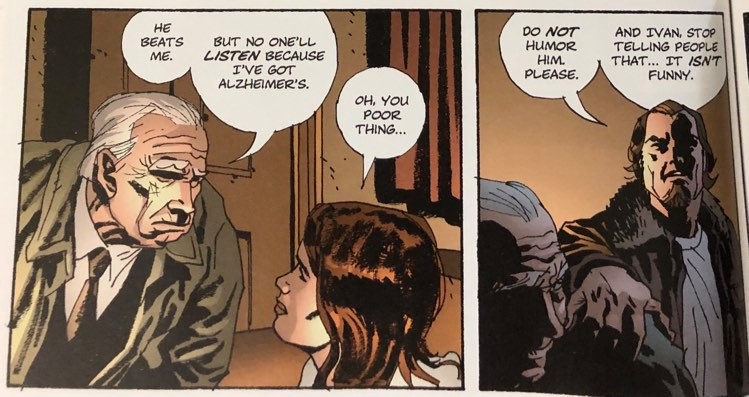 I can only hope to be an old man like Ivan. You know, minus the heroin addiction.

And then there’s Phillips’ artwork. Like the dialogue, Phillips’ uses deceptively simple lines to draw fully realized characters. In some cases, as with an instance of profound sadness, the artwork enhances the plot. 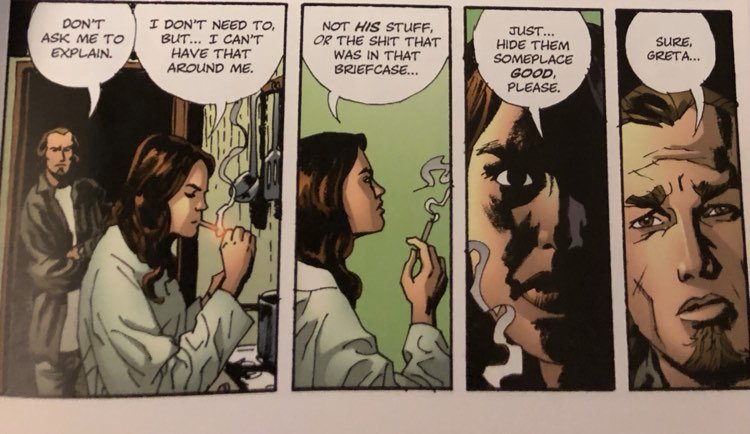 But in other cases, it takes the plot and creates a depth of understanding for character’s that isn’t actually relevant to the plot. 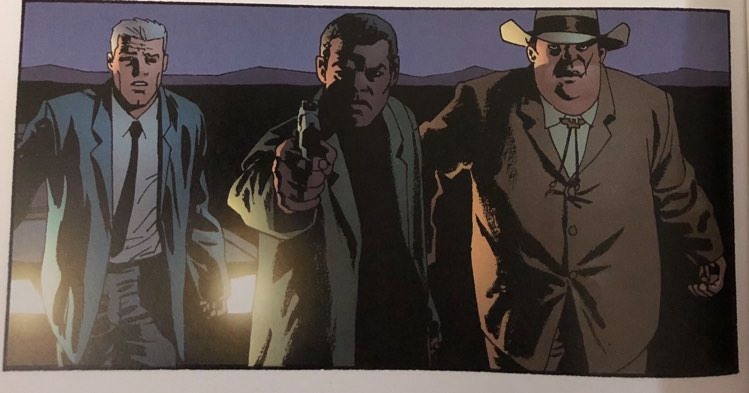 Look at this image. A snapshot of each character, none of them a protagonist. But in this image, we see can see the thoughts behind each face. The viciousness of one, and the determined intensity of another, and the weak willed resignation of the last. Phillips fills the pages with images like this, lending a richness to each character, as well as a genuine emotional life.

When you pair Phillips’ art with Brubaker’s dialogue, we’re invited to live with the characters for a while. To understand them, to inhabit their lives. To see what makes them who they are, and to love them. 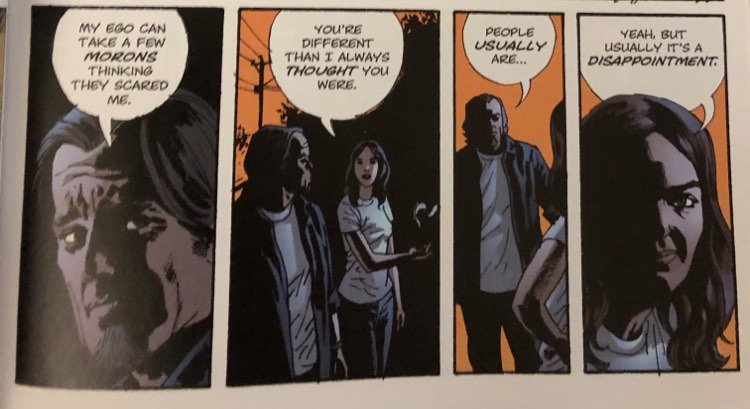 Tracy Lawless missed his brother’s funeral. He was in army lockup. Naturally, he deserts, running back to Center City. He missed Ricky’s funeral, but maybe Tracy can find his brother’s killer.

Once again, Brubaker and Phillips give us a story about someone haunted by the past. Once again, it’s the characters’ families, their relationships, their imperfect loves, that make the story real. 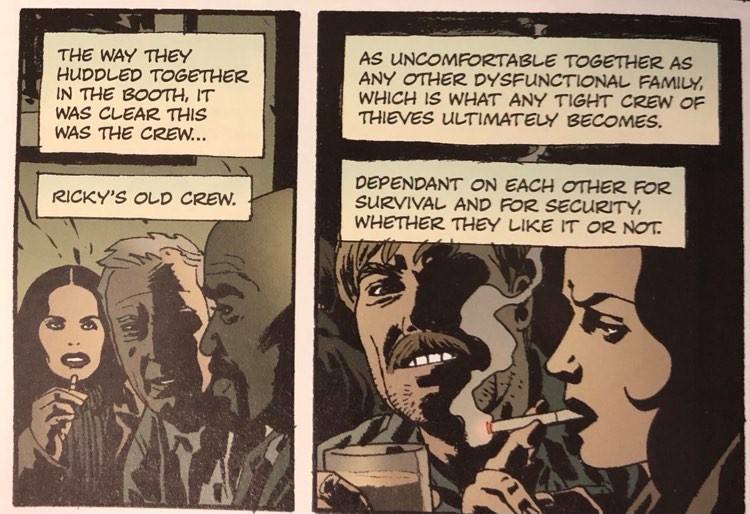 Tracy Lawless ends up filling the role of unlikely private detective. He isn’t stylish, or suave, or snarky. He isn’t a ladies man. He doesn’t chain smoke. He doesn’t fill the panels with purple prose about how hard life is. He just tries to find the truth about his brother’s death. Because that’s all he knows how to do. And as Tracy learns about the last years of his brother’s life, we learn about Tracy’s past as well. He and his brother were friends with Leo. Their parent’s pulled heists together. In fact, their father was Teeg. The murder that defined Leo’s life also defined Tracy’s.

Once again, we see the way the past touches the present. The way Ricky’s past envelops his brother. The way Tracy is repeatedly warned away from the truth, but refuses to stop searching. And, once again, the heist is only a background to these people’s lives. The crime, the brutality, the betrayals, these aren’t what the story’s about, but these happenings are an extension of the characters. Their sleep is interrupted by nightmares, and their sex is warped by violence and lies. They’re not only trapped in the past, they’re trapped by their entire life. They’re trapped by their connections with other people, living and dead.

And that’s the thing about Tracy. 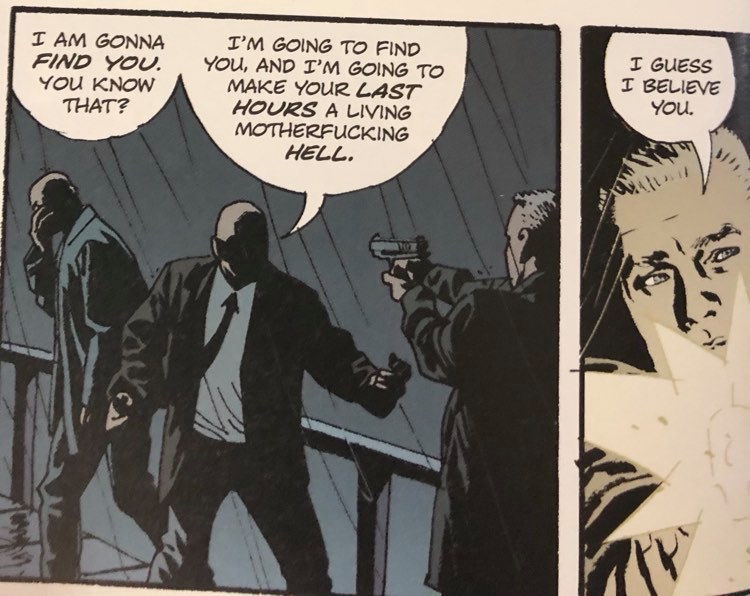 Tracy’s most obvious character trait is his stoicism. His interactions with people are cold and pragmatic. His actions are calculating, thinking steps ahead. But every goal he has is a result of human connection. His every motivation comes from love. And his coldness, his emotional distance, they take the connections he does have, and his occasional tenderness, and they make them all the more significant, and all the more heartbreaking. 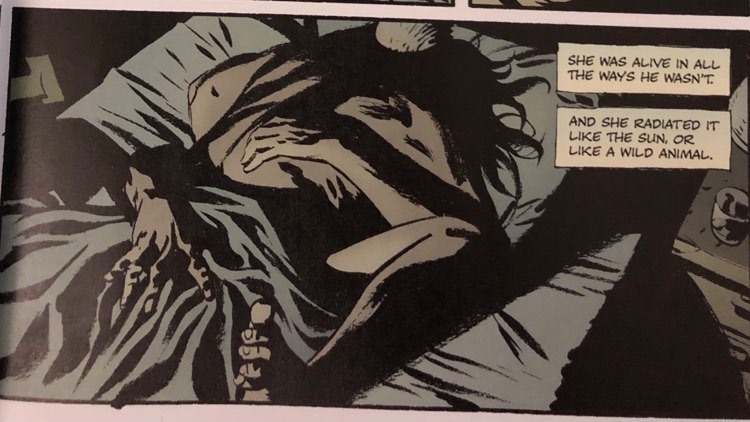 “Lawless” continues to explore the past, and the effects it has on the present. And you might find yourself wondering, what kind of history produces a person like this, a family like this? Well, the next arc has the beginnings of an answer.

The Dying and the Dead

The first two arcs lay out some of Criminal’s most important themes, the artistic motifs it intends to follow. One aesthetic goal appears to be the creation of a coherent universe, a world and history shared between a host of independent characters. The third arc adopts a direct approach to this aesthetic, structuring itself in such a way that the common history and overlapping experience of the characters is made explicit.

It conveys the sense of confusion and incompleteness that each character lives with. But, when you look at the other stories, the other points of view, every answer is there, every blank spot ultimately filled in. The motivations and actions that the one character might not have been aware of are revealed by a later character. The reader first gets to experience the confusion of someone who, like us in the real world, does not have all the answers. They then get to experience the closure and explanation we crave in fiction. 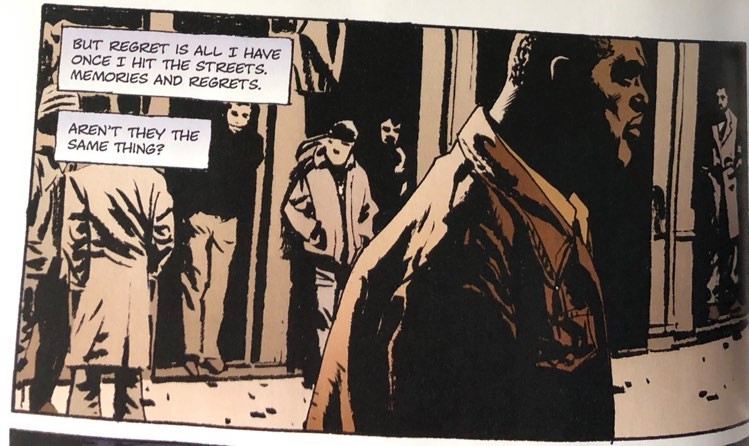 We’ve seen Gnarly before, but we’ve never met him. The bartender at the Undertow, he’s floated in and out of the previous stories. Like everyone in Criminal, there’s the implication of a life beyond the story we’re told. Now, we meet him as a young man, and we get a piece of that story. The second story follows Teeg Lawless, just back from the war, desperate and self-destructive. His two kids, Tracy, and Ricky.

Tracy and Ricky aren’t a part of the story. Except that we start to see the world they were raised in, and how they became who they were. In Ricky’s case, who he died as. And you’re left with the desire to go back and read about adult Tracy again. With the understanding of where he came from, and a father who loved and hated him at the same time.

And finally we learn Danica’s story, another doomed soul. Her story fills in the blank spaces of both Gnarly and Teeg’s, just as their stories give context for hers. Like them, she’s just trying to survive. Like them, the world doesn’t have a place for her. 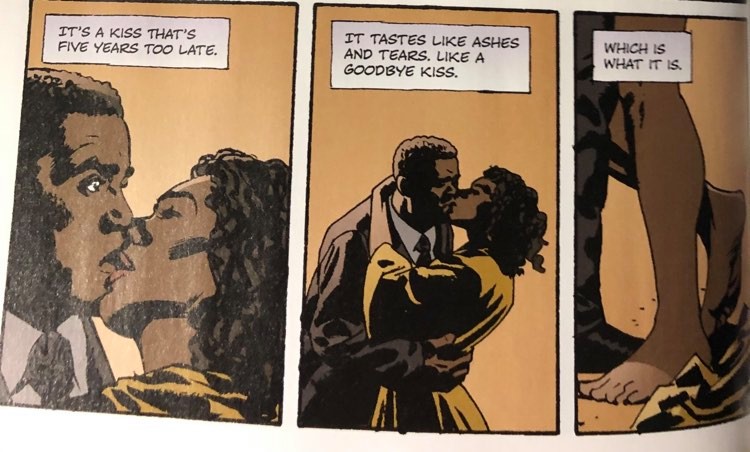 The final arc in this collection. “The Dying and the Dead.” Some character’s end up dead, but most survive. Most are in a continual process of dying. Their goals, their friendships, their loves. These pieces of them die, but they survive. This is our first look at the history of Center City. The history that haunts Tracy, and before him Leo. The entwining of relationships, and the way the past shapes who people are.

The world of Criminal is broad, and the characters are diverse. But if you asked me what the central theme is? It’s that everything ends, but the past is always with us.