You are here: Home / Featured / The Complete Winter Soldier by Ed Brubaker Review!

Winter Soldier is more than it appears at first glance. The first solo series for the revitalized Bucky Barnes, spinning out of his short-lived stint as Steve Rogers’ successor in Captain America, upon release, it seemed like another entry in the strangely growing mini-line of Captain America titles in the wake of the success of his MCU movie debut. However, nearly a decade later, and the newly re-released complete Winter Soldier by Ed Brubaker

collection reveals itself as the writer’s proper farewell to Marvel Comics. The series caps off a lengthy and acclaimed run with a series that perfectly encapsulates Ed Brubaker’s Marvel career’s peaks and valleys. 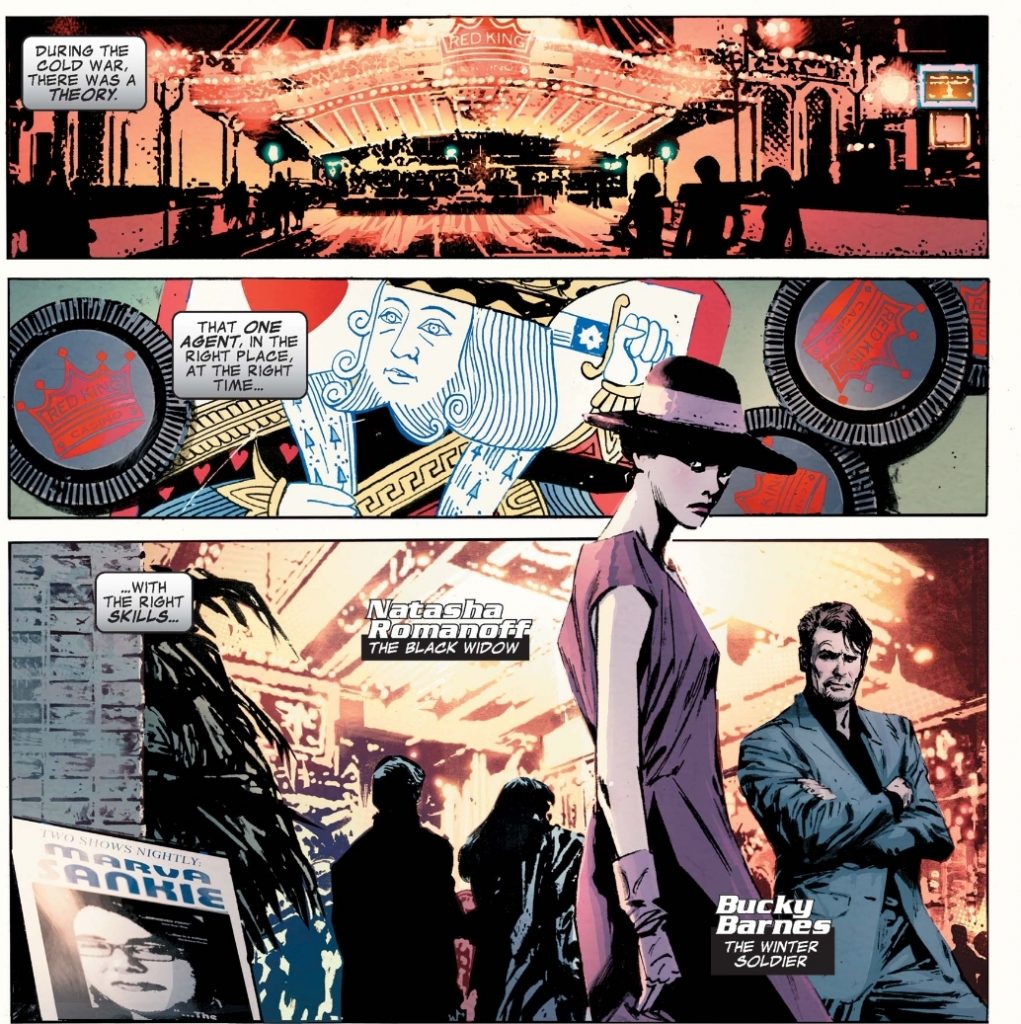 For context, Winter Soldier picks up almost immediately after the events of the now largely forgotten Fear Itself crossover. Bucky’s seeming death in that crossover was revealed to be a ruse in a post-event epilogue issue, handily included in the collection for readers who aren’t die-hard Fear Itself fans. Once again thought dead by the world at large, and with his lover and ally Black Widow by his side, Winter Soldier puts Bucky Barnes firmly into the shadowy world of espionage spy action. A tone Brubaker had long proven in his wheelhouse in the first several years of his lengthy Captain America run.

These moments, especially in the first arc, where Bucky and Natasha fight their way through the absurd and deadly underbelly of the Marvel Universe, are where the series really finds its stride. The opening arc has everything from a machine-gun-toting gorilla to a malfunctioning Doombot, firmly planting it in the comic book madness of Marvel while still maintaining a deadly serious tone and stakes. Brubaker was clearly in his element in this book. When compared to the far more traditional superheroic, and far more boring, relaunched Captain America title he was writing at the same time, it is clear that the spies-and-schemes world of Winter Soldier was where his passion and energy was devoted, and it still shines through years later.

While the series is titled Winter Soldier, it very well could have been titled Winter Soldier and Black Widow, as Natasha Romanov is just as important and relevant to the series as Bucky Barnes. The two’s romance, stemming back to their days as Soviet operatives during the height of the Cold War, forms the book’s beating heart and is undeniably compelling. The two tortured, cynical assassins-turned-heroes finding solace and comfort in each other’s arms is a dynamic that genuinely works. It’s no surprise the two remain one of the most beloved couples in the Marvel Universe to this day, even if they haven’t been together for years now. 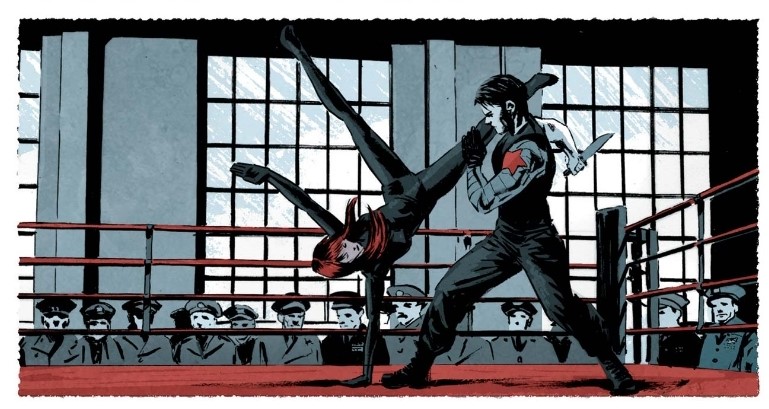 Unfortunately, Black Widow is also the source of Winter Soldier’s (and Brubaker’s) biggest missteps. The second act of the 14-issue run follows Bucky, and various guest stars, chasing after a rogue sleeper agent who kidnaps and brainwashes Natasha, reverting her to her old villainous ways with no memory of Bucky or their life together. While a significant source of angst for our moody black ops hero, this plot reduces Natasha to little more than a bargaining chip in a feud between two men. For one of Marvel’s biggest female heroes, it feels like a waste. It falls into a similar trap as much of Brubaker’s Marvel catalog, where women are strong, powerful characters right up until they are more useful as dramatic stakes for the men in the starring role.

The misuse of women isn’t the only familiar thing that Brubaker brings to Winter Soldier, as it effectively serves as his final goodbye to the Marvel Universe, and he eagerly brings all his favorite toys to the party. Guest appearances from the likes of Daredevil, Doctor Doom, Captain America, and Wolverine, all of whom featured in other series under Brubaker’s pen, manage to feel natural and fun. Rather than a self-indulgent farewell tour, Winter Soldier succeeds as a capstone to the work of one of Marvel’s most prominent writers during a significant period for the publisher as a whole.

The three storylines of Brubaker’s Winter Soldier (The Longest Winter, Broken Arrow, and Black Widow Hunt) do an admirable job of telling relatively self-contained arcs that ultimately feed into the long-form narrative of the entire series. Pitting Bucky against other rogue agents of the Winter Soldier program (a plotline eventually used in Captain America: Civil War

) is a compelling hook and leads to some fantastic spy vs. spy action set pieces. Leo, the ultimate villain of the series and last surviving Winter Soldier aside from Bucky, is an effectively menacing and unhinged threat. However, he doesn’t really ever exceed beyond the standard for the genre. It is telling that while this plotline was re-purposed for the Marvel Cinematic Universe, Leo was quietly left behind in favor of Baron Zemo. 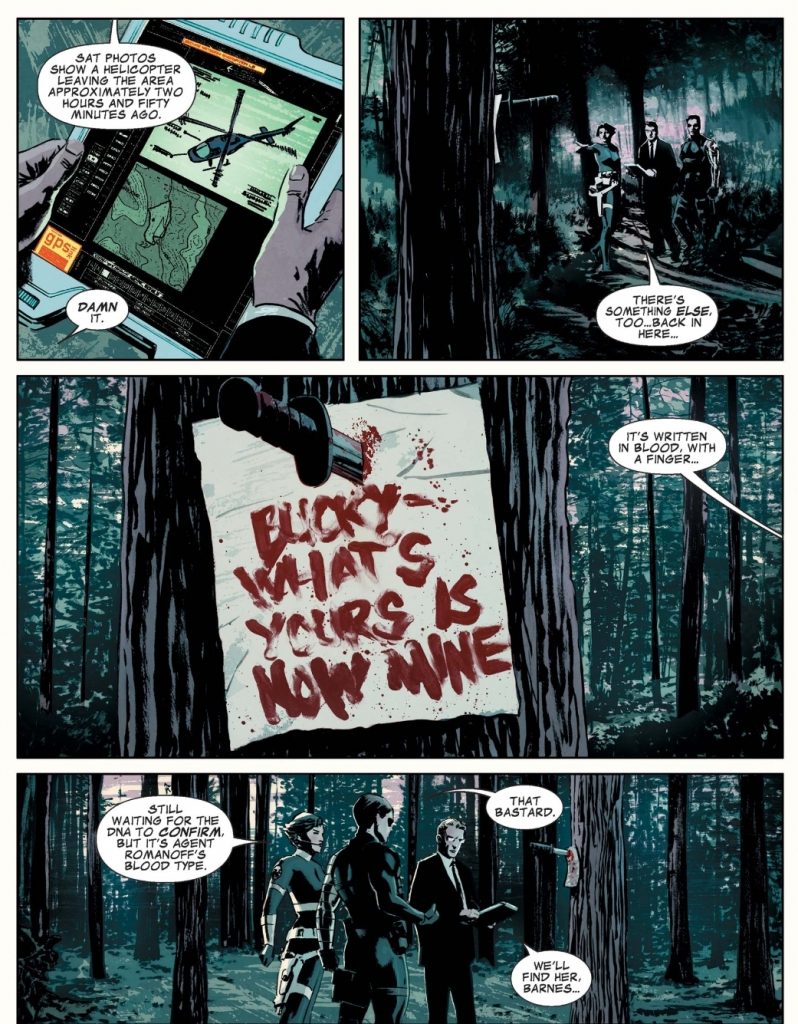 Now, I haven’t mentioned the art of Winter Soldier yet, courtesy of Butch Guice, Michael Lark, and Elizabeth Breitweiser, simply because, well, it is really dang good and deserves a proper spotlight. Guice’s shadow-soaked linework and often borderline photo-realistic faces give the series a distinctly gritty, real feeling that is equally effective and gorgeous years down the road. Lark does an admirable job following up Guice for the series’ second work, trading in the stylistic flair and hyper-real aesthetics for more traditional superheroic figures and layouts that still stay within the series’ artistic lane.

Breitweiser’s colors are, frankly, stunning. The washed-out, desaturated palette paired with bright flashes of pale lighting and rich shadows are the secret weapon in Winter Soldier’s arsenal. Which is a shame, as her support of C0m1csg@te in the years since the series’ release makes it very difficult to recommend following her work or supporting it elsewhere. While Breitweiser and her husband have not overtly supported the hate group in years, as someone who has actively been targeted by its mob, it is difficult for me to overlook her role in the title. Her work is gorgeous, and she clearly has all the talent in the world, but that doesn’t mean much when you stand by bigots.

is an appealing collection. Bucky’s first time in the solo spotlight is home to some of the most exciting superhero spy adventures you could ask for, and it is a truly beautiful book through its entire 14 issue run. However, between the poor treatment of its female lead and one member of the creative team’s profoundly problematic beliefs, it is hard to universally recommend. This collection contains some of Bucky’s best stories since his return as Winter Soldier, but there is enough baggage both on and off the page that I’ll leave it to readers to decide whether that is enough for them to pick it up.