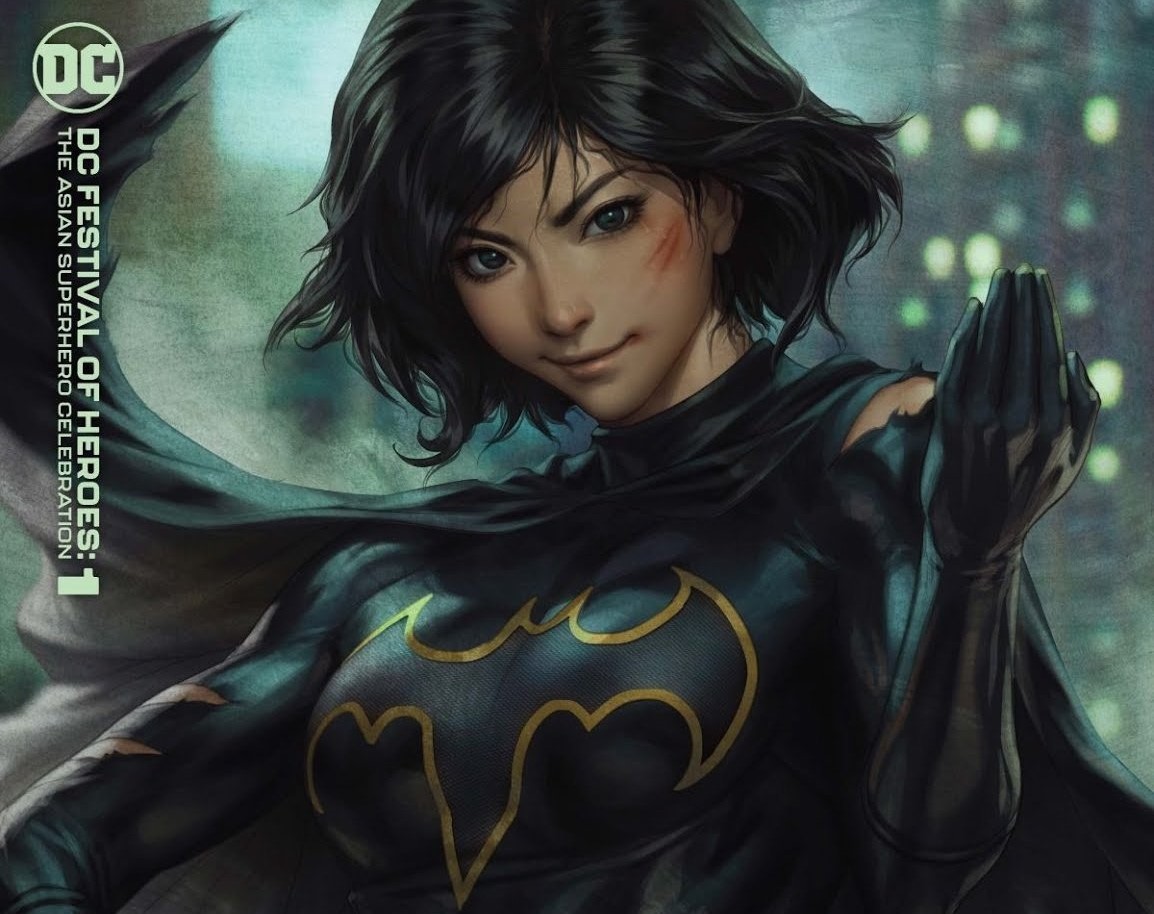 As I said, Cassandra went through a lot, even lapses into villainy and weird mind control. Those things are never good. But they only represent a tiny fraction of her story, and I’m sure you won’t want to miss the rest of it. She’s not just the best Batgirl, she’s one of the best characters from DC Comics.

Cassandra, a girl that Barbara is teaching how to speak, reveals herself to be David Cain’s daughter. She shows Batman that she’s strong and kind enough to help Gotham stand up again and becomes the new Batgirl. She meets the Batfamily and works together with Azrael.

Batgirl goes on her first mission alone and teams up with Azrael some more. 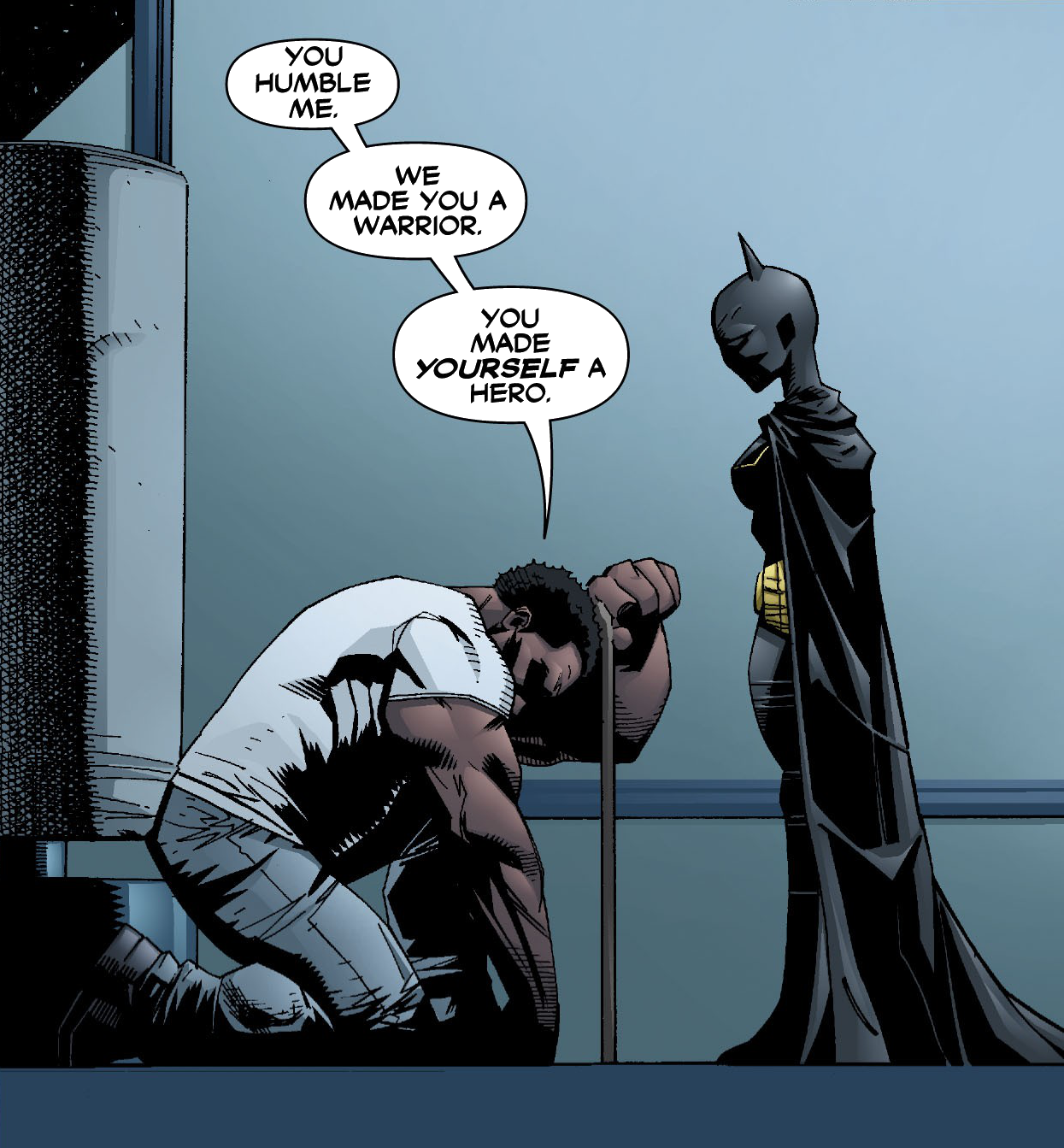 A great start to her run! Cassandra Cain, now Batgirl, struggles with the hero world: fighting metahumans, saving everyone even if it’s impossible, all the sacrifices one needs to make. Her obsession with helping others is crystal clear, all to redeem herself from her past and become more like Batman.

We also get Cass teaming up with Batman, interacting a lot with Barbara, and even fighting Shiva (one of a thousand more spotlights).

Batgirl Vol. 2: To The Death

Batgirl appears in Robin #148-151. Not collected yet. From these chapters to Robin #162, you will be reading Cassandra’s evil arc; most fans don’t like it and tend to ignore it, but there is good stuff to be found there.

Batman and the Outsiders: The Chrysalis

Collects: Batman and the Outsiders #1-5

Batman and the Outsiders: The Snare

Collects: Batman and the Outsiders #6-10

Batman and the Outsiders #11-14 haven’t been collected yet.

Batman: Battle For the Cowl – The Network

Collects: Battle For the Cowl: The Network 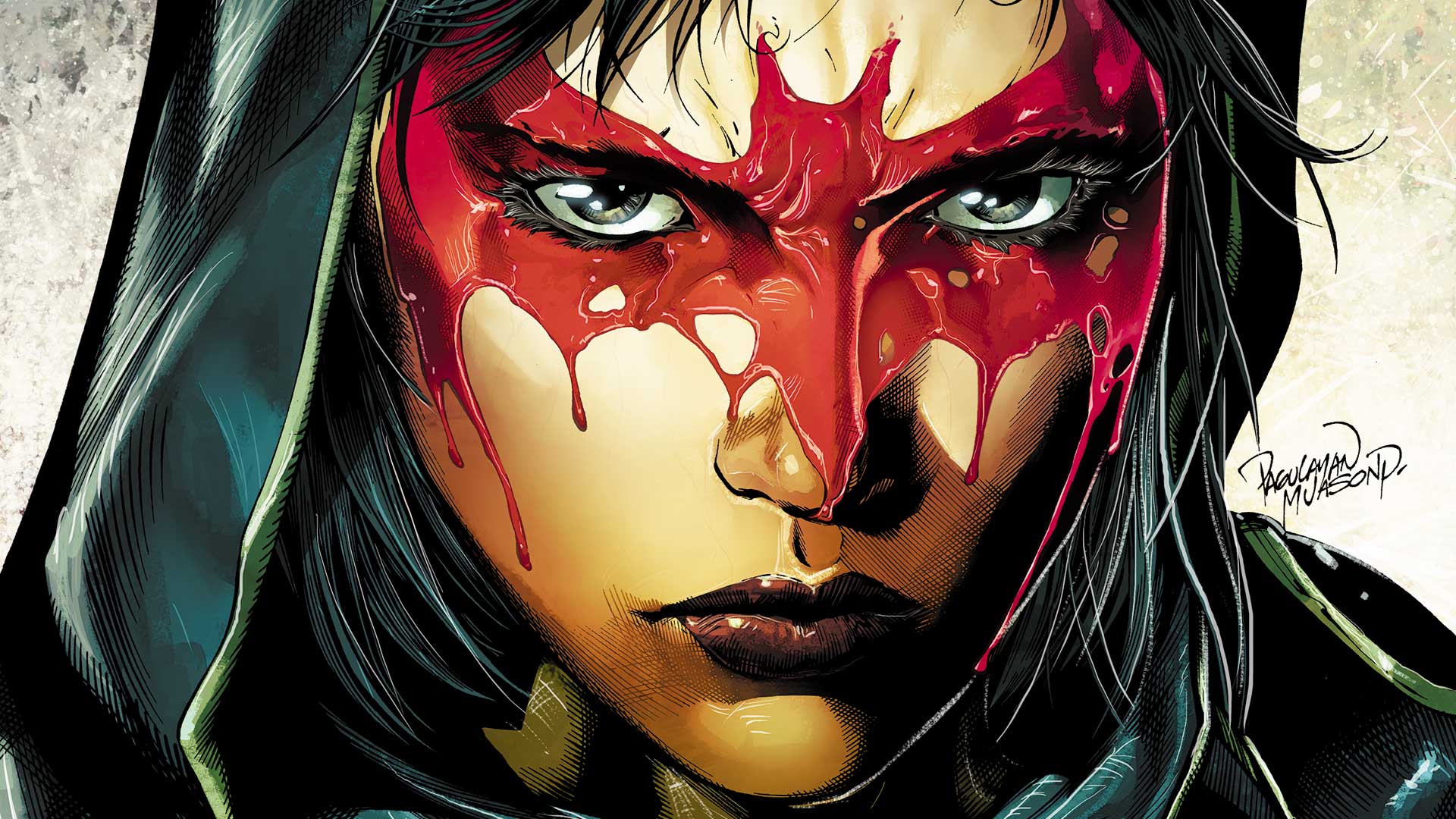 Cassandra Cain was reintroduced in Batman and Robin Eternal, where her new origin was explained. Secretly trained by her father, David Cain–also known as Orphan–to read people’s movements as if they were language, Cassandra became a highly-skilled fighter. In her first mission as an assassin, Cassandra only realized what she was doing after making her first kill. Batman helped the traumatized girl, who after many events and her father’s death, assumed the mantle of Orphan and joined the Batfamily.

Currently, after moving past her trauma and finding out about her life before the “New 52,” Cassandra and Stephanie Brown work together as Batgirls.

This is Cass’ new origin, but it’s quite similar to the old one in some aspects. Someone called Mother is after Dick Grayson and the Batfamily, and Cassandra, a stranger to everyone at the time, mysteriously arrives and starts helping them. Orphan intended Cass to be a gift for Mother, showing that assassins didn’t need drugs to get stronger; Mother rejected the girl but still used her in missions.

In Batman and Robin Eternal #7, Cassandra sees a ballet presentation for the first time, and it’s as beautiful as you can imagine. Her love for dance is one of my favorite things, it’s such an important part of her character for me and always a blast to see.

Issue #13 is definitely the best of the bunch; if you like Cassandra, you need to check it out!

After David Cain dies, sacrificing himself to save Cass, she decides to take his mantle and help Gotham as Orphan.

Here we see Cass joining a team with Batman, Tim Drake, Stephanie, Clayface, and Batwoman. It features some pretty great action moments with her (it’s always good seeing how badass she is), and it’s nice seeing her developing a friendship with Clayface. It is sweet and meaningful for both of them, so it quickly becomes one of the best things about this book.

I can’t even begin to describe how much I love issue #950. It gives Cass the focus she deserves in a heartfelt and beautiful chapter while developing her character and introducing her mother, Lady Shiva (it also has Cass dancing ballet which I LOVE to see). The whole “League of Shadows” arc is great, maybe Tynion’s best writing in Detective Comics, even though I wish it would’ve developed Cassandra’s relationship with Shiva even more. You can’t miss it for the world.

The following arc shifts focus, giving Azrael and Batman more space, which is a good change of pace, not to mention it’s great to see Batman and Zatanna’s friendship. But Cassandra has some good moments too, like when Clayface teaches her Shakespeare.

Clayface is at his lowest; he can’t see himself getting better or as anything more than a monster. To make matters worse, the Victim Syndicate wants to use him to tear Gotham down. Cass tries her best to help him, but she still can’t give Clayface the happy ending he wants (don’t forget your tissues).

(After everything that happened, your heart is already ripped into shreds, so I’ll focus on something else) In issue #974, Cass says what the symbol of the bat means to her; that’ll continue to be really important and it’s great to see her thoughts about it being brought up. This is also when she and Steph finally learn some things about their lives before the “Flashpoint.”

Batman: Detective Comics Vol. 8: On the Outside

This pretty much works as a prelude for Batman and the Outsiders. I wouldn’t say it’s completely necessary, but it’s still a good read.

Collects: Batman and the Outsiders #1-7

Batman and the Outsiders finally give us the payoff we were expecting from the “League of Shadows” arc in Detective Comics. As Batman forms a new team to help him fight Ra’s al Ghul, Cassandra meets her mom again and becomes one step closer to being something even better.

Batman & the Outsiders Vol. 2: A League of Their Own

Collects: Batman and the Outsiders #13-17 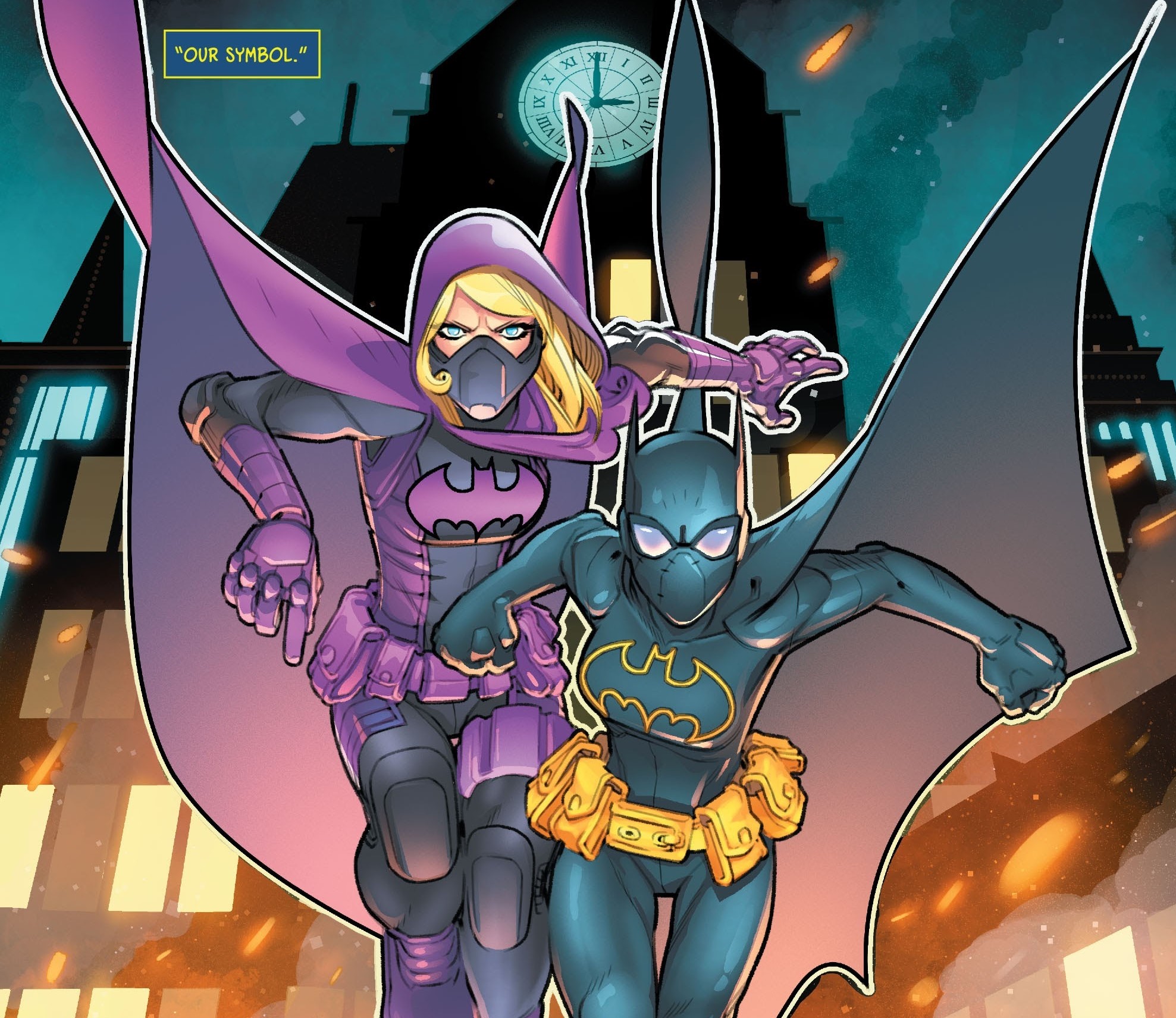 Cass and Steph know the city needs a symbol, so they search for the Bat-Signal. Their plan fails, so they put their Batgirl suits on and decide to become the symbol the city needs (At last! This story makes me so happy!)

Tynion is one of my favorite comic creators and I love seeing him writing Cass, so this was a treat! The Batgirls investigate the mysterious person who hired Jim Gordon to catch the Joker.

In issue #7, we see Cass in an alternative future fighting the Magistrate with incredible art by Guillaume Singelin. And in #8, Cass is framed for murder by Seer and teams up with Batwoman.

Still being chased by Seer, the Batgirls have to lay low while finding a way to defeat her. But, as always, a new baddie appears to make everything harder.

Even though the tone is more soft and comedic than most would hope, it’s fun and worth a read.

Batman: Shadows of the Bat: The Tower