From his first arc on Avengers, through New Avengers, Time Runs Out, and Secret Wars, Jonathan Hickman explores the dichotomy of life and death, their intersections, and how they, together, form the basis of creation. Infinity, his first major event, is the first crescendo of these ideas, the way they pull at and touch one another, collected in the latest Avengers by Jonathan Hickman Vol. 3 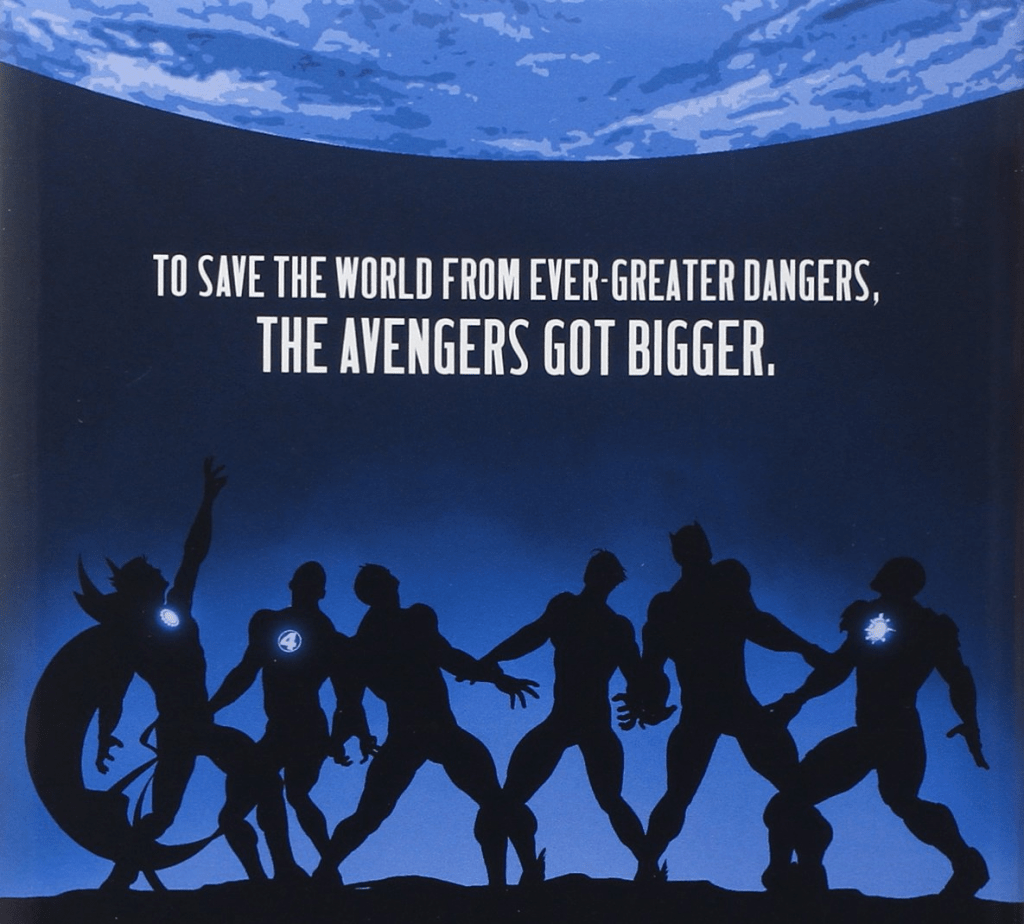 The scope of Infinity is appropriate for its name. A tangle of superheroes, aliens, empires, tyrants, secret societies, and several world ending threats move through its pages. The threats are of different scales, but all represent death, and the destruction of the earth. Thanos, the mad titan, the wooer of Death, comes to earth, his goal wanton destruction. His first appearance here underlines a cruelty that continues to be shown and emphasized, whether he interacts with his enemies, or his own lieutenants. At the same time, the Builders, an alien race responsible for guiding evolution and creation throughout the universe’s history, have made a beeline for earth. No longer life-givers, they intend to destroy the earth, in the process saving the universe. Heroes and alien empires unite to fight off this threat.

The problem is, the Builders are right.

The universe is close to death, in constant danger of crashing into a neighboring universe. To save our universe, the earth must be destroyed. Or, the neighboring universe’s earth could be destroyed, keeping our own safe. Until the next universe comes crashing in, and once again, an earth must be destroyed. Earth’s most intelligent and most powerful men have gathered together, forming the Illuminati to stop this, to solve the problem, telling no one, not family, not friends, of the constant danger. Telling no one that they’ve begun the rationalization necessary to destroy alternate earths, in protection of their own. 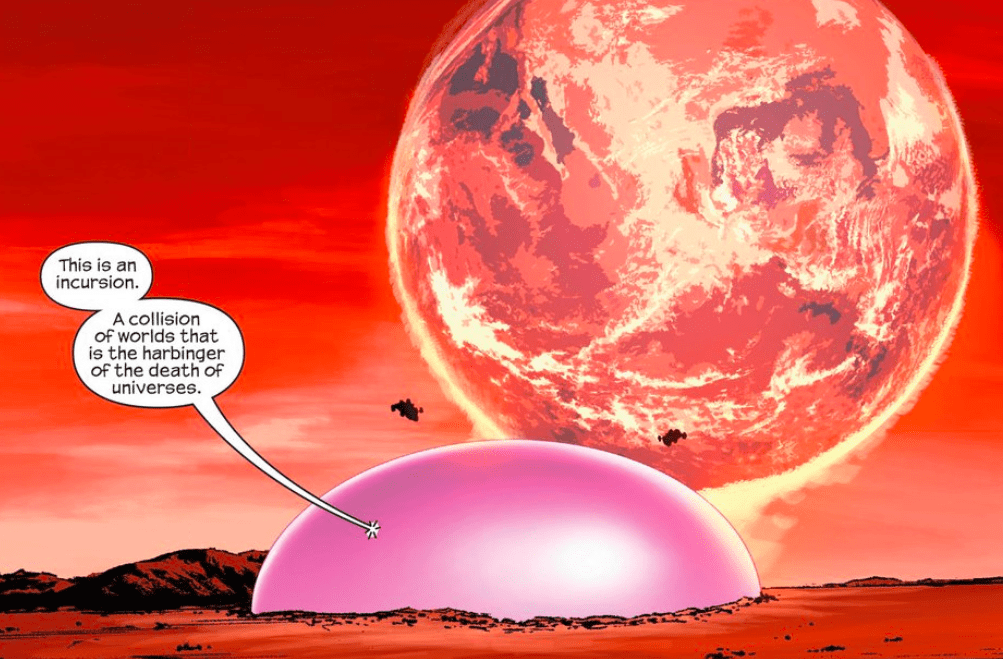 At first glance, the banding together of heroes and alien empires make a coalition that stands for life. They fight for freedom. More than that, they fight for free will. The right to make their own destiny. And at first glance, the Builders, with their destructive acts, stand for death. A death preordained, a death necessary. A mercy killing. They know if the earth doesn’t die, the universe will. Their actions are deterministic, an acceptance of fate, and a rejection of freedom. But as the characters and factions move, as they act and interact, the question about who represents life and who death becomes more layered, more complex.

Look at the Illuminati – good men, or at least men with good intentions. Then look at the way they try to solve the issue of colliding universes. Acting under the belief that they, and only they, are intelligent enough to see what’s coming, they keep what’s coming a secret, all the while building bombs capable of destroying planets. These men, seen as heroes, have fallen into the same deterministic, death filled ideology as the Builders. And throughout the book, their enemies see this, and describe them as such. Whether a death-craving emissary of Thanos, or a death cult member, these people see the Illuminati as they are; covered in death.  While the Illuminati try to reconcile their actions with their sense of right and wrong, a war begins in space, as the Builders begin to destroy the armies and planets of anyone in their path. The various empires banded together alongside earth’s heroes fight for life in the galaxy, yet include members like Annihilus, whose name tells you all you need to know about his penchant for death.

And of course there’s the Kree. The army, led by Ronan the Accuser, are dangerous, and aggressive, and most of all honorable, prizing freedom above all else. But within the Kree, there’s a sharp divide, separating the army, with its lust for life, from their leader, the Supreme Intelligence. The Supreme Intelligence possesses the racial memory of its entire species, every piece of knowledge the Kree has acquired throughout history. And looking at the probabilities, it sees how small the chances of victory are. Following the same deterministic paths as the Illuminati, and the Builders themselves, the Supreme Intelligence surrenders, sacrificing the freedom of the entire species to ensure it is preserved. Much to Ronan’s chagrin.

We have another example of the dichotomy between life and death, and the grey area that exists when you combine fatalism and intelligence. Once again, this grey area exists in characters that are heroic, characters we can see are trying to do the right thing.

Hickman is a dense writer. His plots are full of scheming and secrets and politics. This might be why not enough people notice how funny he is. In this case, the heroes of earth prepare to parley. It’s a stressful time, and people question Captain America’s decision. Solid and reassuring, Cap explains he sent his best negotiator. The reveal that his best negotiator is Thor, god of Thunder and brawny Vikings, carrying a hammer the size of his head, is met with surprise. 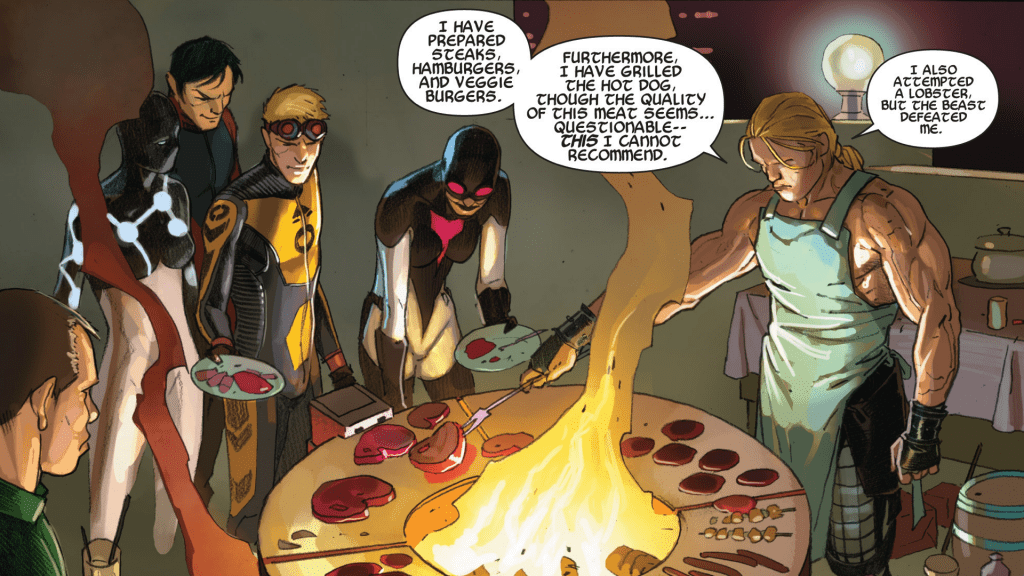 Hickman has an understanding of every character he writes, but he seems to hold a special affection for Thor. Or maybe he just writes Thor as such a joyous character, a character defined by a love of life, whether he’s drinking, or battling, or barbecuing. Thor is the very definition of living. He doesn’t fall into the trap that is predicting and manipulating the future, not out of any stupidity on his part, but because he appreciates the now. Because the moment is everything. As such, he is certainly not a negotiator. But he is undoubtedly a leader.

With a mythic blow, and an epic speech, Thor fells the Builder he negotiates with, then rallies Ronan and his army to rejoin the fray. They ignore the orders of the Supreme Intelligence, choosing instead to be free men, even if that means dying as free men. More than anyone else, more even than Captain America, that paragon of righteousness, Thor is an agent of life. Where Captain America tells a young hero that there is only your actions, only doing the best you can, Thor disagrees. There is purpose, Thor says. Profound meaning in our lives, and the way we choose to live them. Life is more than the fatalism of the Builders, more even than the grounded stoicism of Captain America. Life is meaning, and purpose you were born to fulfill.

Already, we can see that Hickman’s view is more complex than a simple conflict between life and death. But the aliens Ex Nihilo and Abyss bring the stories even more nuance. The former creates life, while the latter ends it, but they function together, are in fact necessary to each other. Life and death, working in tandem to create. Their role is seen in the battle with the Builders, but back on earth, the idea of life coming from death is also explored. When Thanos comes to destroy the kingdom of Black Bolt, Black Bolt allows the destruction, rather than sacrifice honor, or his people, to the mad titan. In a series of epic blows, much of their city is destroyed. But Black Bolt has planned for this destruction, and through the destruction, a new life for Black Bolt and his people can begin. 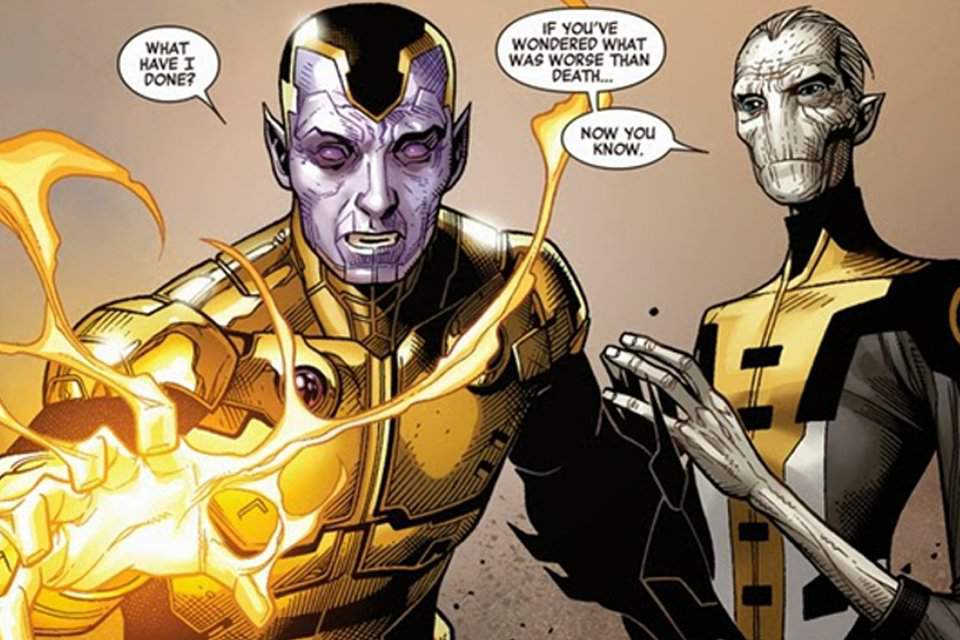 In a final conflict, we are introduced to the son of Thanos, someone who, in his person, contains power over life and death. We watch him wrestle with this contradiction, just as we’ve wrestled with it, in all the pages previous. He makes a decision. But is it the right decision? Is there a solution for what he is?

The story arc ends in a series of quiet moments. The world is saved, but only this time. They’re alive, but death is still coming. And with each moment passing, it becomes less likely death can be fought off. After all, the Builders? The Supreme Intelligence? They were right. If they had succeeded in destroying earth, followed the logic and fatalism of their worldview to its conclusion, the universe would be safe.

But they were stopped, by those who stood up for life. And because of their success, none of them are safe.