X-Factor exists in a really strange memory limbo. Most people think of the team as the Peter David run with Multiple Man or the government-run era with Havok and Polaris. But if you’re really tuned in you remember the original hook of the team being the Original Five X-Men reunited, and if you’re really really tuned in you remember the additional hook of them masquerading as Mutant Hunters to take and train the mutants they “captured” as the “X-Terminators”. This Original Five era may not be necessarily the most well-remembered era in the concept of the X-Factor team, but it can’t be denied that it gave some incredibly influential building blocks into the X-Universe – including Apocalypse, Archangel, and of course…Nanny and Orphanmaker.

While Bob Layton was the author of the beginnings of this series, it really started bringing these ideas to life when the great Louise Simonson, primarily joined by her husband Walt Simonson, took the reins. X-Factor Epic Collection: Angel Of Death collects this Simonson era in its full swing. This collection really pushes the scope for what X-Factor as a concept can be by stripping it down and rebuilding what works, what doesn’t, and making it look like it was meant to be there from the beginning. From Archangel to “Inferno”, this collection really captures some of the heights of the Simonsons’ X-Factor run while keeping up the serialized soap opera so at home in this era of X-Books.

The collection opens just before “Fall of the Mutants”, one of the larger and weirder X-Events of the 80s. Uncanny X-Men, X-Factor, and New Mutants each told their own harrowing stories under the same banner with very little actual crossover. Uncanny X-Men dealt with the Adversary in Dallas that lead to the “death” of the X-Men and the Outback Era, New Mutants dealt with the Right (more on them in a second) and the shocking death of Doug Ramsey, and X-Factor…well I’ll tell you.

The collection picks up right after Warren Worthington III’s apparent suicide after losing his wings, and the team turning against Warren’s longtime friend Cameron Hodge as it becomes clearer that he orchestrated Warren’s death and organized X-Factor’s mutant-hunting facade for his own purposes. All of this culminates in the appearance of the infamous smiley-faced armored suits of the Right, as led by Cameron Hodge attacking the reading of Warren’s will and leading an attack on X-Factor’s young charges (featuring a Sal Buscema guest art spot).

X-Factor 21-23 is a fascinating start to the collection since it does drop you in media res. It feels like you are coming in on a third act in issue 21 but it does grab you so intently and it’s such a great culmination of Simonson beginning to break down what X-Factor is and to give a major brick to X-Books to play with going into “Fall of the Mutants” and “Inferno” in the Right. Simonson also gives the team the ultimate confrontation of their double life as the public begins to pull at the strings at that facade – a conflict that solidifies at the end of “Fall of the Mutants“. There’s also just enough exposition to catch you back up on the status quo in terms of the X-Factor kids and Beast’s intelligence drain, but there’s no space wasted as we get the reveal of “Death” in issue 23 setting up Apocalypse’s plot. 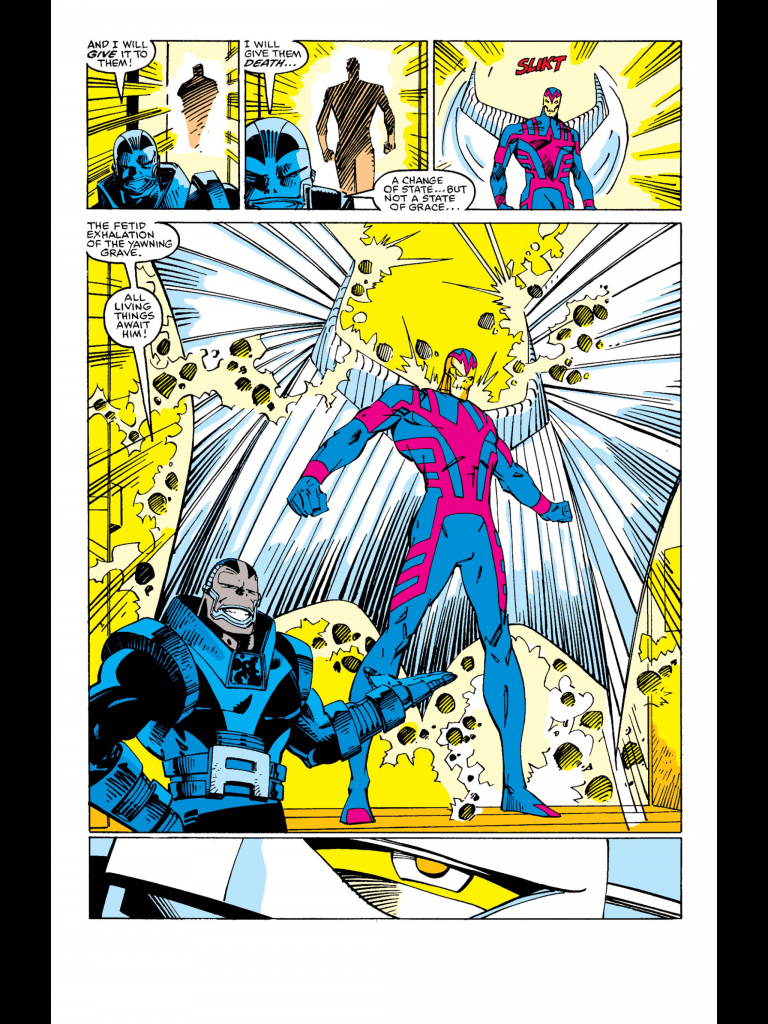 The actual “Fall of the Mutants” section of this collection is by far the height of this collection, and it is a bit weird how early it is when looking at the collection as a single entity. The team is immediately teleported from their fight with the Right onto Apocalypse’s ship and he comes out swinging and reintroduces his three horsemen and his final addition, Death – aka Warren Worthington III – before setting them loose to terrorize humanity.

The Simonsons absolutely bring it in these issues, and I particularly want to call out Walt Simonson’s sense of scale for this event. The depiction of just how large Ship is throughout these issues is incredible, and there’s a real sense of weight when it gets involved in the destruction of New York. There’s just such a visceral momentum that I can’t get over, it’s really excellent stuff. There’s also some excellent visual storytelling that the two pull off with a heel turn that really is a testament to “acting” in the medium. Louise Simonson’s control of tension and drama is excellent, there’s just an excellent sense of stakes, suspense, and triumph and these issues really feel like the heights of what superhero comics can be. 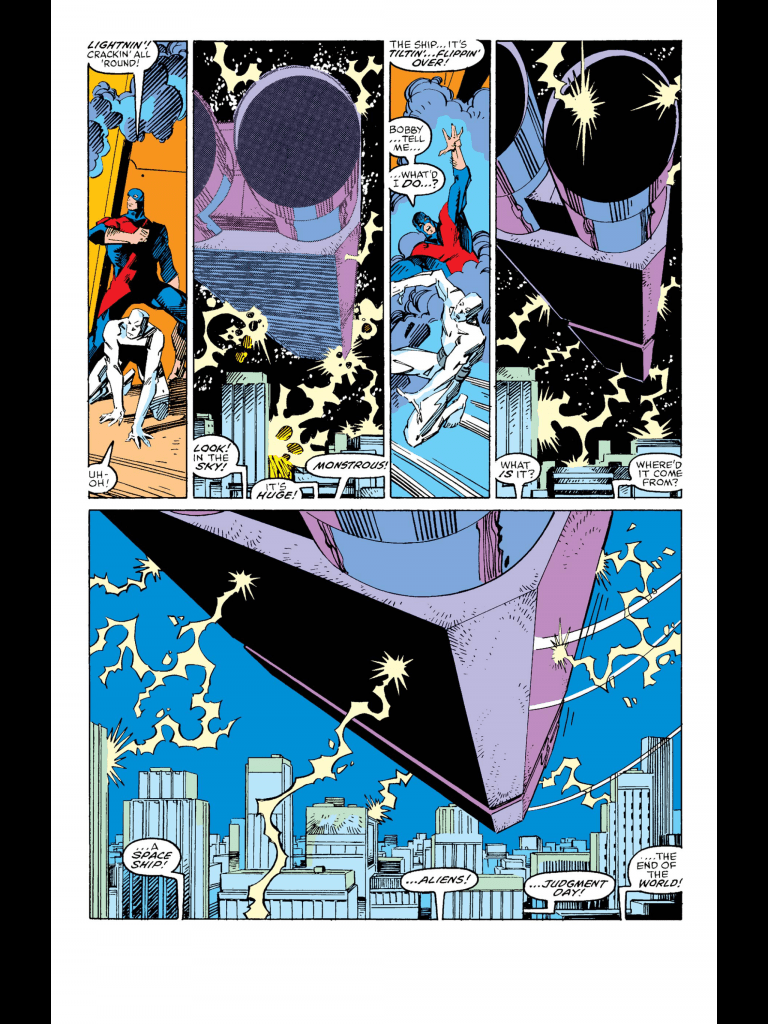 Reaching those heights makes it a little weird to keep it going and a handful of issues after focusing on the aftermath and sorting out the state of X-Factor. The primary focus of the immediate fallout is the team saving folks in the wake of Apocalypse’s destruction and finding themselves regarded as heroes, leaving their weird double life behind essentially giving themselves a new status quo.

There’s also a sense of recapturing the superhero soap opera aspect of the X-Men as Simonson juggles a handful of ongoing plot threads weaving in and out of return villains. We get Beast dealing with Trish Tilby and his declining mental facilities (which has always felt off to me), Warren searching for the missing Candy Southern, and (most importantly to the larger X-Line) Scott learning that his wife Madelyne Pryor was alive before “dying” in Dallas and that their son is still out there. All of these plots are wrapped up in attacks from their newly claimed Ship (a delightful addition to the team), a Christmas issue, Alien Avengers Doppelgangers, Infectia, and the Alliance of Evil.

It’s hard to speak on the quality of some of the threats because it’s just plain action more often than not and Walt Simonson for the most part keeps the action dynamic and fun to look at. Even the less action-packed threats are still fun to read. One standout is the X-Factor kids keeping Bobby out of compulsory heterosexuality by stopping him from kissing Infectia over and over – something that became one of those fun little things with hindsight. Simonson really delivers on some classic superhero fanfare as well as keeping the momentum moving towards something. Rarely does it feel like a plot is going nowhere and more often than not, the plot is going towards “Inferno“. 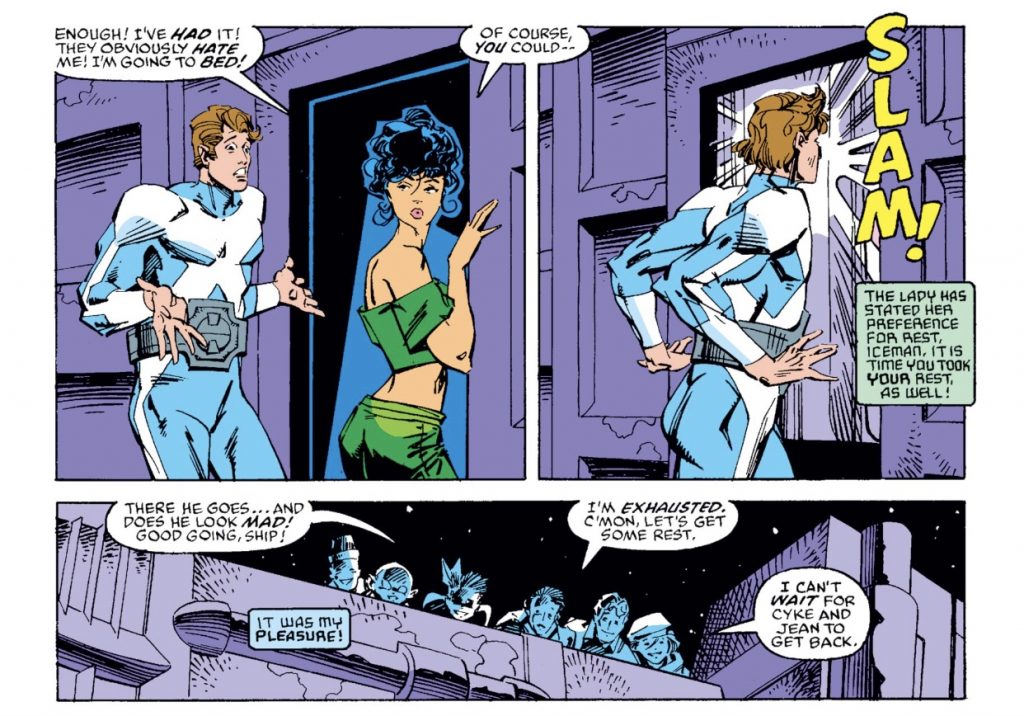 It’s All Inferno? Always Has Been.

A beauty of this era of X-Books is the line-wide focus towards events and with “Inferno“, X-Factor is no exception. In fact, X-Factor is quite important to the event. It’s exciting to watch the pieces fall into place as the collection leads us right up to the brink of the event in its final issues. There are a number of small leads towards the event, most notably the presence of the Limbo demons growing more and more, even in the annual Avengers team-up plotted by Tom DeFalco and drawn by Steve Lightle. These leads grow the most explicit at the end of Warren’s search for Candy Southern, which takes him to the Right and reveals Cameron Hodge’s dealings with them. 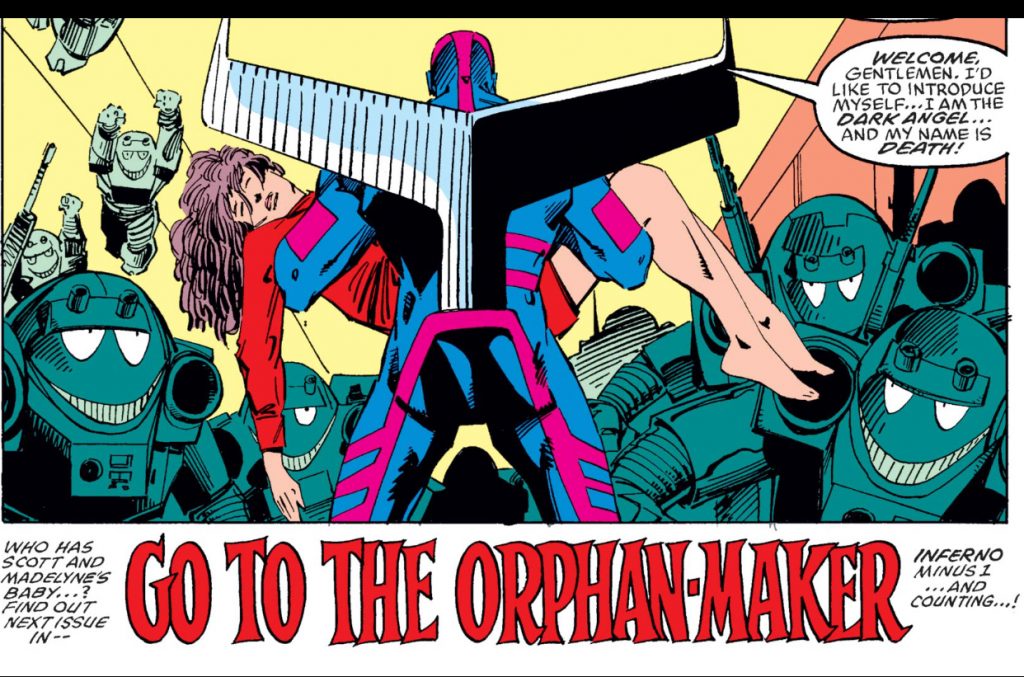 The most direct tie-in to the event is Scott and Jean’s search for Scott’s son Nathan. They get some cryptic foreshadowing from Destiny before heading to Scott’s orphanage and getting caught in a three-way conflict between (the beloved) Nanny & Orphanmaker and the demons of Limbo within the very sinister basement of stolen babies. It’s all in motion and it makes the back half of the collection very exciting but stops just short of getting into the main event (out in Omnibus form in March).

Overall this collection is bookended by two really big high points in this X-Factor run and the points in between aren’t exactly slouching either. However, the nature of this collection series makes it feel slightly off and I can imagine that it fits all the better reading immediately after the first collection drops off. There are a couple of additions to the collection as well. Power Pack #35 also written by Simonson and drawn by the underrated gem of cartooning Jon Bogdonave and gives a really excellent perspective on the events leading to Power Pack’s quick cameo during “Fall of the Mutants”. The second is an annual depicting a confrontation between Apocalypse and the High Evolutionary, which is a part of a line-wide crossover in that year’s annuals I remember running into while following the X-Books reading order (on this site <3). While I did skip it the first time I read through these on Marvel Unlimited, the confrontation between Apocalypse and the High Evolutionary, both men of Darwin, is interesting enough.