You are here: Home / Featured / Who Watched the Watchmen? The Wicked and the Divine 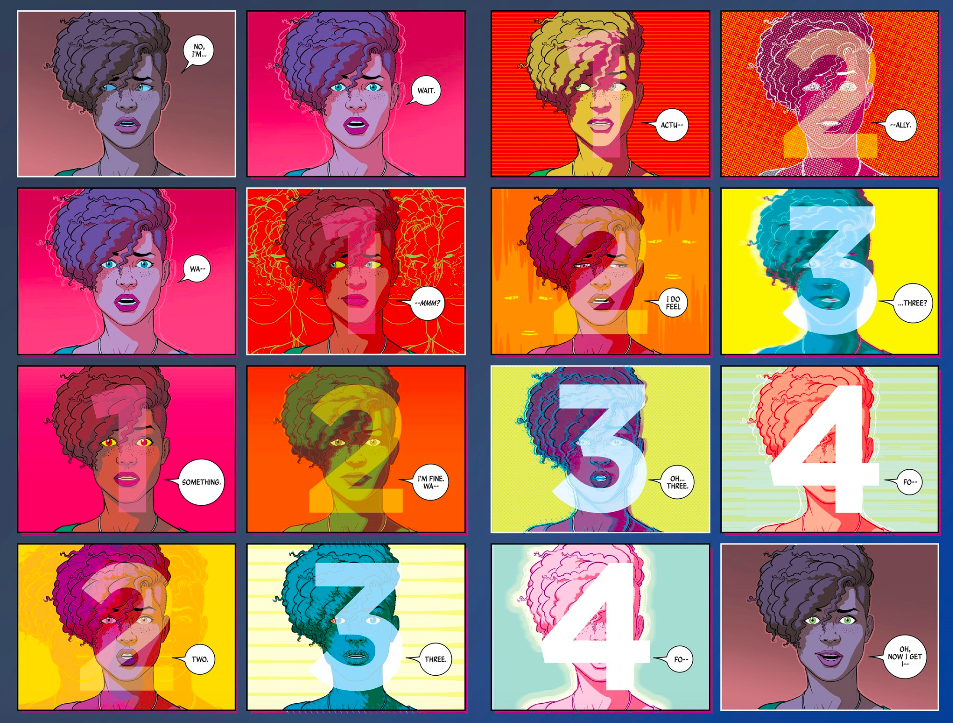 An Examination of Power in Contemporary Society

The series tagline sums up the conceit better and more succinctly than I ever could:

Gillen starts his story in media res, dropping the reader into the early days of the latest “recurrence,” which has found the latest incarnation of the Pantheon come into being in and around contemporary London. And much as Alan Moore populated Watchmen with cultural hallmarks such that the book is inextricably linked to the 1980s – all the better to explore the issues of the day that fascinated and terrified him – The Wicked + The Divine is also rooted firmly in its singular place and time. For Moore that meant weaving his characters through the geopolitics of the present and recent past – Vietnam, fears of nuclear war with the Soviet Union, reports of violent crime that dominated the 6:00 news. Gillen, though, is more interested in the allure of fame – and the power that comes with it – and its effect on the younger generation. That means he spends a lot less time than Moore interrogating how these new gods interact with the government – parliament and the British royal family are only occasionally mentioned – and more on their impact on youth subculture: concerts in abandoned London Underground stations, viral interviews with internet vloggers, and a ravenous fandom desperate to see these gods up close.

After all, this is the first time the Pantheon has emerged in the 21st century. Given the amount of time between recurrences, coupled with the fact that the gods are only ever around for two years at the most before they all die and the recurrence ends, modern humanity’s knowledge of the Pantheon is limited to old, grainy photos and the writings of historians and other academics. That means devotees and skeptics in equal numbers, all based on third- and fourth-hand accounts through history that are shared on internet forums and during panels at the Fantheon convention. But now they’re here, available for AMAs and magazine profiles (one issue about halfway through the series takes on that very format, complete with photo spreads and interviews with the gods themselves – it’s fantastic).

Where the Minutemen were brought together to fight crime and become intimately involved in global affairs, the ostensible purpose of the gods in WicDiv is to inspire a following – and boy is “gaining followers” a pretty central theme of life in the age of social media. So, the reach they all have is exponentially larger than anything they have experienced in any of their other iterations. Instead of doing the bidding of the military as the “gods” of Watchmen did, the Pantheon are giving sold-out pop performances and working “miracles” – mostly boosting the endorphins of their audiences to near-orgasmic levels – to bring elation to the masses (depicted by co-creator/artist Jamie McKelvie and colorist Matthew Wilson as splashes of deep reds and purples and neons that melt into one another into a mesmerizing, hypnotic palette).

Gillen’s focus on a dozen such superhumans – as opposed to a handful of costumed crimefighters but only one actual superhuman – gives him plenty of runway to explore how inconceivable amounts of power impacts different types of people. Some of the Pantheon (such as Baal and Lucifer) decide to be bold and brash, at least on the surface relishing the spotlight and admiration (or disdain) that follows. Others retreat into the London Underground (the underworld gods being as literal as possible) and cultivate an air of mystery that suits their foul temperaments. But when all is said and done (and perhaps unsurprisingly), Gillen lands at pretty much the same conclusion as Alan Moore did: no matter who you are – whether that’s a bright blue former physicist or a Gen Z British teen – that amount of power can only serve to separate someone from the rest of humanity. As is the case with Dr. Manhattan, none of the Pantheon finds fulfillment in their power, or that they can (or even should) use their abilities to solve the world’s most substantial problems. They get a rush, sure – after all, they’re until-recently-mortal teenagers who have been granted gifts beyond their wildest dreams – but the emptiness that was inside them before their emergence remains. 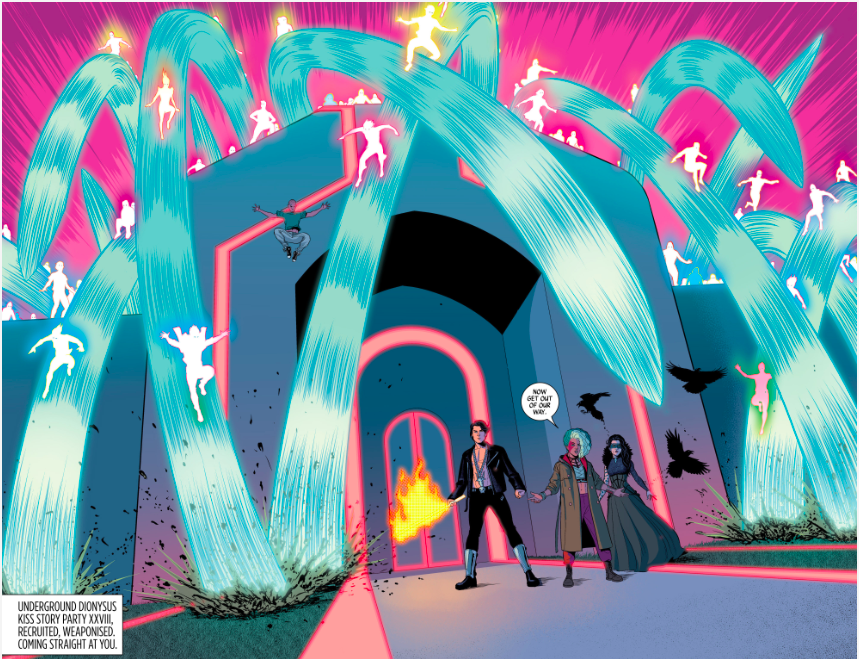 Each of the gods has a distinct aesthetic that is impeccably realized by artist Jamie McKelvie, who has more regular opportunities than Watchmen co-creator and artist Dave Gibbons did to really let fly. Where Gibbons only had one truly superpowered being to work with, McKelvie has around a dozen at any given time; there are several large-scale splash pages whose design work and overall vibrancy rival Gibbons’ infamous reveal of Ozymandias’ alien squid as it decimates New York City. Beyond the big set-pieces, I must say that in my book, Gibbons’ art doesn’t really compare to what McKelvie does here. I don’t mean to say that Gibbons’ work in Watchmen isn’t strong – his (human) characters are well-realized but have always fallen a bit flat to my taste. McKelvie, on the other hand, employs a photorealistic style that works so, so well for me. It firmly roots the series in a recognizable version of contemporary, modern society and makes it easy to buy into the world he and Gillen have created. His characters’ faces are expressive to quite frankly one of the highest degrees I’ve seen in a comic (for instance, I have never seen anyone draw a more perfect teenager sneer in my entire life). These adolescent deities are lived-in, fully realized, intensely flawed characters that are as petty, impulsive, and horny as every 19-year-old you’ve ever met, and McKelvie is somehow able to impart all of that in his art.

While Watchmen and WicDiv both kick their plots into gear with the death of a member of the central supergroup, the authors use vastly different frameworks to approach their emerging mystery-slash-conspiracy. Nowhere is this more apparent than in their respective choice of point-of-view character. In Watchmen, this is Rorschach, the masked vigilante whose terseness is exceeded only by his brutality. Rorschach is a blunt object without nuance whose methods solve only simple problems in simpler times. In the end, his values prove too black-and-white for the moment at hand and he is dealt with – gruesomely – because he refuses to change with the times. WicDiv’s protagonist, Laura Wilson, on the other hand, is a prototypical teenager – bored with her unremarkable life, she desperately wants to be more and is of course drawn to the Pantheon and their world. She attends as many performances as she can, seeking out the high that comes with being in the presence of pop greatness. Laura would give anything to be on that same stage, and as we follow her and watch as her infatuation with the gods grows, we learn just how much damage can be done in the search for power and adulation. 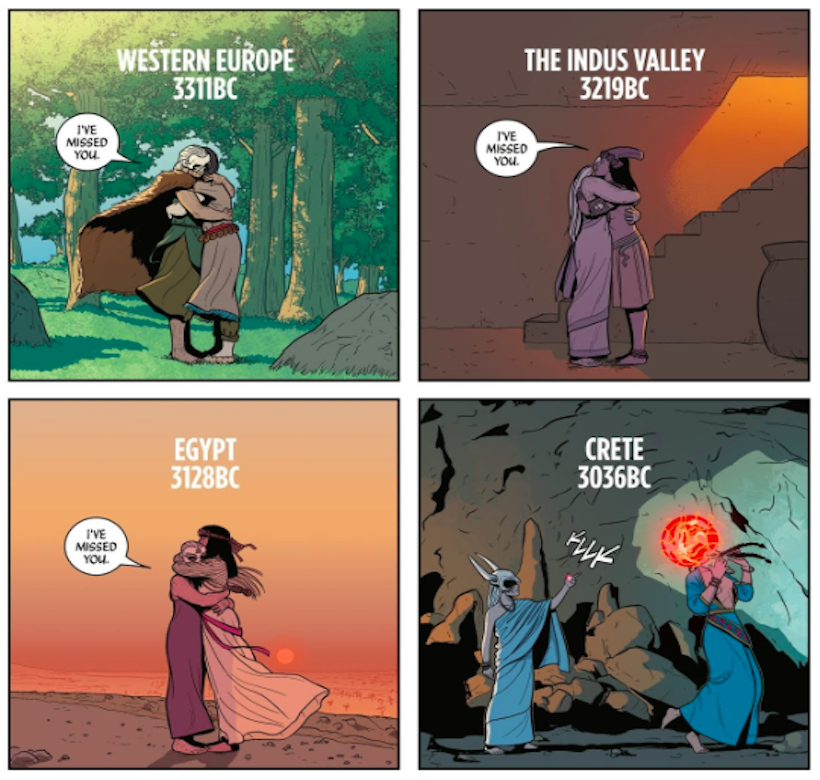 Alan Moore’s interest in how his “heroes” interacted with history is a key element of Watchmen, something he explores through his alternate 20th century timeline where Dr. Manhattan brought the United States victory in Vietnam and the Comedian assassinated reporters Woodward and Bernstein before they could break the Watergate scandal, allowing Richard Nixon to remain president into the ‘80s. Kieron Gillen has a similar fascination with the historical impact of his central superbeings, and he takes advantage of the length of his series and the scope of his concept. Even while exploring the emotional highs and lows of the current Pantheon, Gillen does a masterful job planting seeds about the previous instances of the Recurrence, kernels that both expand the book’s mythology and reveal more about the significance of the goings-on in the present. Of particular note are issues #36, which includes an extended, nearly silent sequence of panels showing how a certain key moment in the Recurrence cycle happened throughout the centuries and the various cultures in which the gods emerged; and #37, which features a stunning use of 90 all-black panels to drive home a critical character revelation that I won’t spoil here. Gillen’s inclusion of these moments adds depth that likely wouldn’t have made the cut in a shorter series, and The Wicked + The Divine is all the better for it. 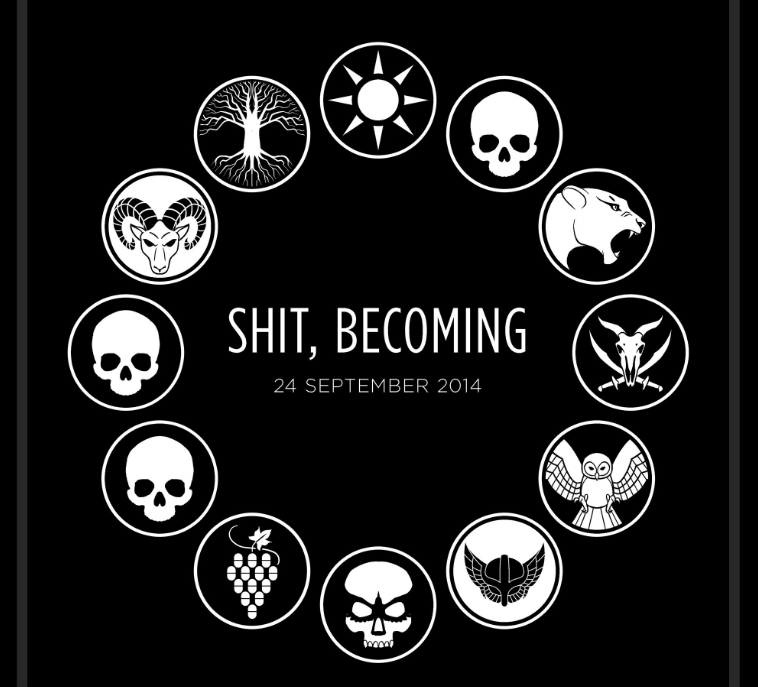 But I will say, the extra room in which to play isn’t without its pitfalls. Where Watchmen is tight, the plot kinetic and purposeful throughout (with, of course, an absolute banger of a final reveal), at points in The Wicked + The Divine I wasn’t sure the seeds Kieron Gillen planted would actually grow into something satisfying. The hints and hidden movements, the sly glances between characters (again, McKelvie is *shockingly* good at drawing these moments) at times felt too cute by half, a wink towards secrets that only the creators knew but which couldn’t possibly be as interesting to the rest of us once they finally got brought into the light. I was pleasantly surprised, though, that when all the secrets had finally been laid bare, The Wicked + The Divine resolves its mystery rather nicely. In the process, it takes time to reflect on its characters’ journeys with a sympathetic and compassionate eye – it doesn’t forgive them for their transgressions during their superpowered lives, but it doesn’t fully absolve them either. While it’s no tentacle monster, it’s a rather gratifying conclusion.

While Moore and Gillen take different paths along their exploration, I think at their cores, Watchmen and The Wicked + The Divine are stories about power – its different forms, its corruptive nature, how easily it can be used for good or for ill or to cause fear or to inspire. In the end, it’s up to those who can access it to use whatever power they have to make the world a better place, one song – or giant alien squid – at a time.