You are here: Home / Featured / Who Watched the Watchmen? Justice League Unlimited

The simple version: our topic series has The Question as one of its main characters exposing an apocalyptic conspiracy aimed at the superhero community, prominently features Captain Atom, partially climaxes in a false flag disaster engineered by the world’s smartest man posing as hero, and ends on the question “Quis custodiet ipsos custodes?” (even if the response offers up the fig leaf translation “Who guards the guardians?”). By that metric alone, the widely beloved ‘Cadmus arc’ of Justice League Unlimited is indisputably A Watchmen. Plus Alan Moore liked the one episode. Case closed.

The more significant answer is that to a substantial cross-generational section of the pop culture viewership, the Cadmus arc is Superhero TV Watchmen. 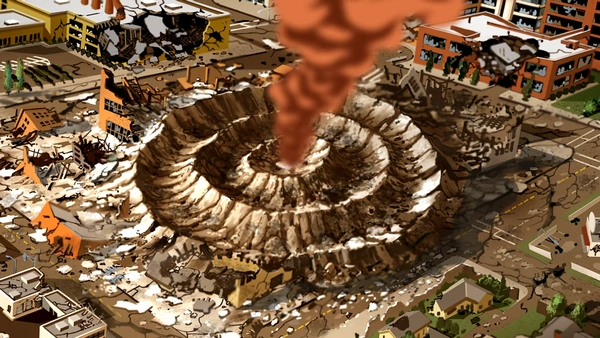 To call something ‘A Watchmen’ as I did is basically reductive to all involved, but reflects a certain truth. It doesn’t necessarily mean it’s the singular best of its form. It doesn’t even mean it’s the first of its kind; there were brilliant, groundbreaking cape comic texts before Moore and Gibbons were told they couldn’t use the Charlton characters. But A Watchmen is the right material at the right place and time to represent a shift in the popular consensus, the way that for instance The Dark Knight did for superhero films; a single leap bigger than can ever likely be made again. This subject matter is no longer shlock, or even well-constructed shlock that delivers the goods. This is grown-up business now. This is too self-evidently smart for you to be a rube for continuing to buy in in your teens, 30s, 60s. This is the unrepeatable threshold everything afterwards will be judged against, and on some level inevitably fall short of because that moment can never happen again.

It helps that Cadmus has 30 years of benchmarks for ‘DC superheroes are SERIOUS now’ to draw from. While wrapped around a nucleus of a concern for the social and moral limitations of the caped set previously unseen in mass-media adaptations starring major IPs (but endemic to A Watchmen), the arc pulls imagery and conceptual nuggets from everything from Whatever Happened to the Man of Tomorrow?, Kingdom Come, and The Authority – even having an episode penned by the now-disgraced creator Warren Ellis – to President Lex and Legends; an old-school, pre-Infinite Earths style Crisis even turns out to be the impetus for the entire affair. Beginning on a team-up between Green Lantern and Green Arrow and ending on a potential dark future for Batman, it would be a slightly facetious but still telling summation to describe the arc of these two seasons as “Remember Superfriends, which you should since we do a Superfriends riff episode to remind you? This is everything DC’s done since then.”

That’s not to suggest the show’s success rests on the laurels of references to what came before. Its strengths are its own, bolstered by a soap operatically sincere conviction in its narrative, a seemingly endless raft of all-time one liners (albeit mainly portioned out to a few particular favored leads, such as Jeffrey Combs’ sardonically zealous Question, CCH Pounder’s uncompromising, immediately iconic Amanda Waller, and Kevin Conroy’s imperial depiction of Batman), and an admirably feverish adoration for the grim and macabre within the boundaries of children’s television. Moreover, it knows how to present the material at its disposal to be understandable without historical context. You don’t need any background on Fawcett to understand the thematic contrast presented by Captain Marvel in his episode, have be up on the Triangle Era to realize this Doomsday guy’s laying into Superman a lot harder than most baddies can pull off, or know anything about the Speed Force except that they’ve gotta get Flash back from it.

What it does is give the show a tried and tested toolkit for the characters at hand for escalating a set of broad superheroic archetypes into a scale of drama that hadn’t been seen in this format before, and indeed couldn’t have been prior to a show built on a shared superheroic universe. There’s a roadmap for personal reckonings, monsters that feel as if they could actually finish off our childhood heroes, physical and ideological challenges that the creators know will rock the basic notion of the superhero because they’ve done it before. Wrap those benchmarks up in the context of a broader conflict against an army of designer-made anti-Justice League threats that still leaves as much room for hero vs. villain brawls as self-recrimination, and get there before seeing classic storylines adapted has lost an ounce of luster? Those are the makings of a generational slam dunk success. 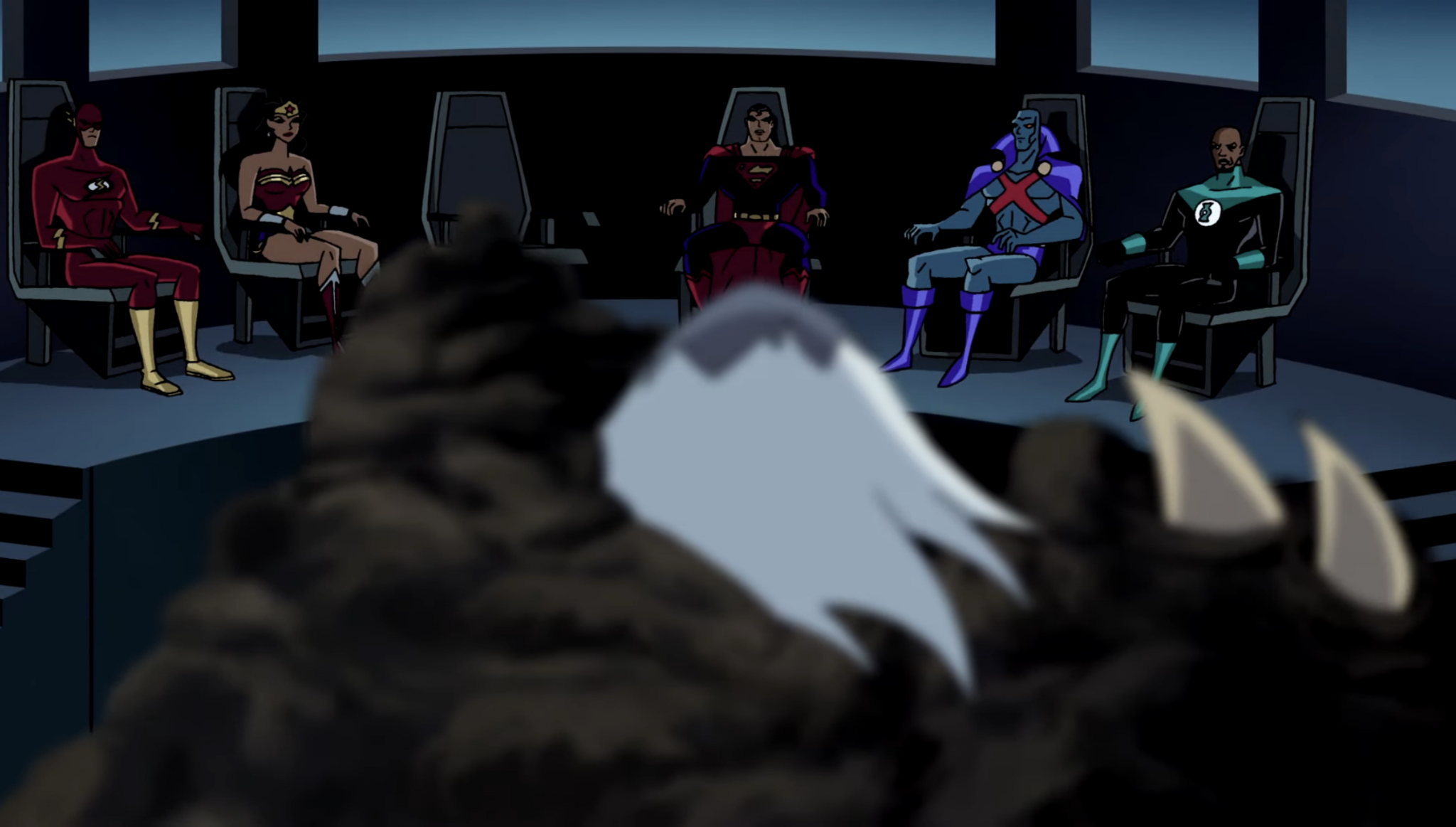 Admittedly, that it has those advantages gives it a little slack; while mostly engrossing as serialized drama, it’s not exactly in the upper echelon of genre texts when it comes to picking at the underpinnings and ramifications of the superheroic construct. Not to suggest it lacks a solid storytelling foundation; alongside a talent base cultivated across the previous decade-plus of the ‘DCAU,’ and the work of the now-legendary Dwayne McDuffie, the series additionally brought in notable comics writers such as J.M. DeMatteis, Jim Steranko, Darwyn Cooke, and Gail Simone to work on episodes. Emotionally rooted in the casual camaraderie and furtive backroom confrontations of the JL Watchtower as the team ‘workplace,’ the series is able to flip artfully between rollicking adventures across space and time, absurdist magical hijinks, cataclysmic blowout super-throwdowns, and genuinely unnerving action-thrillers, while working as both satisfactory standalone episodes and the foundation stones of a multi-season plot. Nor is the base concept a shallow or timid one, set against a backdrop of clandestine genetic experimentation, layers of black-ops deniability, and shifts in public and personal sentiment. The core notion of the Justice League confronting the assorted logical government measures developed against them and the arguments justifying them is a perfectly potent one, dredging up questions regarding accountability, contextual morality, and the moral certitude of those in power earned or otherwise. In practice however, it’s still a show limited by its audience and the material at hand.

It can’t conclude the superheroes are ultimately wrong or in need of truly radical change, even as it – arguably necessarily to give arguments against their heroes any weight to a young audience inclined to trust them – pushes their figurehead in Superman into the shockingly unflattering light of a bull-headedly arrogant potential autocrat defined by naivete and simmering fury (perhaps doing at least as much in the long run to turn viewers off the character as any of Zack Snyder’s more infamous reinterpretations). The League’s further extralegal actions and capacity for abuse of power as essentially an orbital nuclear state, a capacity that’s in fact misappropriated and used on a civilian population, are thematically resolved with a simple ‘well, we’ll have to hold ourselves to higher standards and try harder but at the end of the day we’re needed’ after being absolved by the nominal voice of the common man. The confines of its status as a Justice League cartoon needing to hold to a recognizable shape cannot allow an out from the trap of ‘the Justice League is necessary, acting pretty much as the Justice League has always acted, because otherwise who will save the world from Justice League villains?’ despite its incisive pretensions. Insomuch as there’s a clean real-world message there to draw some nuance there, the concluding metaphor of on-the-ground accountability in the form of human heroes fizzles out a bit once you start to ask how the likes of Green Arrow are meant to keep several dozen godlings in check should the time come. If there’s more than a kernel of truth in the suggestion that the fate of the world belongs to the fluctuating moods and allegiances of a handful of self-righteous jerks and self-justifying ideologues in positions of authority, there’s no room for it to fully grasp the immensity of that horror.

At the end of the day though is the fact that both damns and justifies it: for any aspirations it lived up to or in hindsight fell short of, it was a superhero cartoon for children introducing this genre framework to its medium for the first time. For the purposes at hand, it didn’t need the dazzling formal ambition or searingly unflinching eye of Noah Hawley’s Legion, or the relatively watertight narrative structure and rigorous scab-picking of Damon Lindelof’s later actual Watchmen sequel series. Nearly everything the show’s done has been done better somewhere else since, but the fact of the matter is regardless of any after the fact measure of its successes versus its failings, it was the self-evidently thoughtful splashy populist success that got where it was trying to go first, and that isn’t a bar that can be cleared by quality alone. Justice League Unlimited was good in a way nothing of its kind had been before, such that all subsequent accomplishments in the field will inescapably be defined in relation to it; you don’t get The Boys, Invincible, or Daredevil without the conceptual ground it broke or the iconography its success established. The superhero TV landscape remains to a greater or lesser degree Justice League Unlimited-shaped, with Cadmus its stained but shining crown jewel.

It was no Watchmen. But it was, indisputably, A Watchmen. 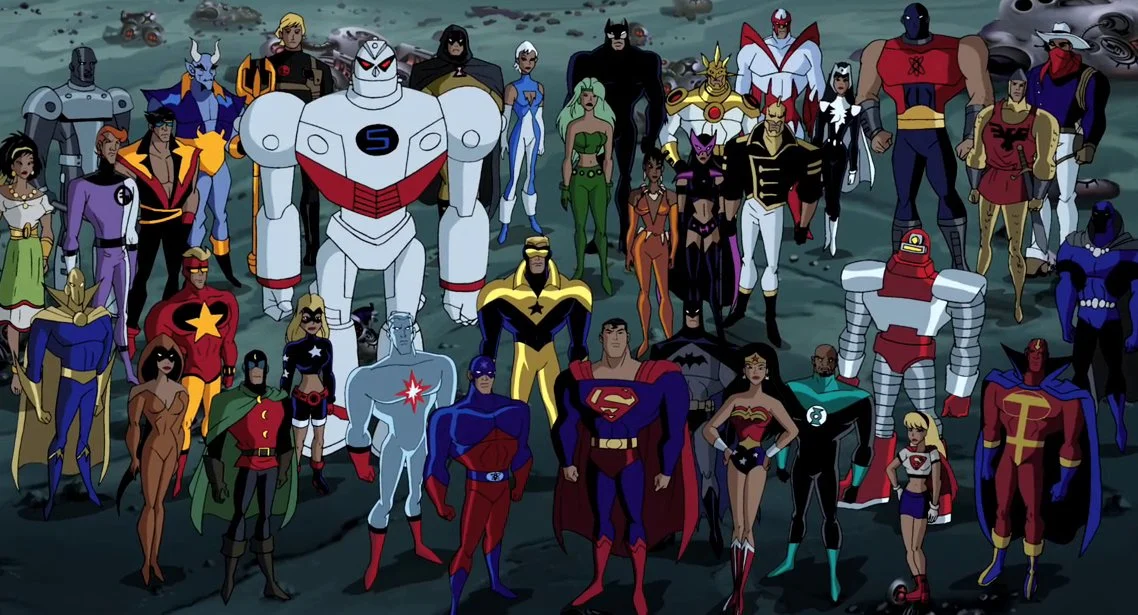