You are here: Home / Featured / Question of the Week: What’s a Good Ultimate Spider-Man Reading Order?

May 2nd, 2014 saw the release of The Amazing Spider-Man 2 (may we all live long and forget), and for many comic fans, that’s the superlative most frequently associated with our favorite webhead: The Amazing Spider-Man. It’s the title that Stan and Steve built, and it’s the most established for good reason.

I tweeted as much on Good Friday, and that leads us to this week’s question of the week:

Do you recommend reading the ultimate comics in order or can I just read ultimate Spider-Man straight through?

Whereas many Marvel heroes and teams have a convoluted history of impenetrable continuity (I’m looking at you Avengers), Ultimate Spider-Man is one of the easiest titles any new reader can dive into. There are a handful of exceptions which I’ll discuss, but for the most part you can pick up Ultimate Spidey and plow through over a hundred issues uninterrupted by questions like “Wait, who’s a Skrull?”

You Want Me To Read The Ultimate Universe? Not For Me! 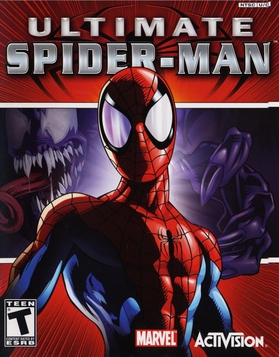 A brief history lesson: As Marvel bounced back from a late 90’s bankruptcy (this is still amazing to me; this was like yesterday), the editorial team was looking for ways to draw in new readers. This became particularly important with the upcoming X-Men and Spider-Man movies finally giving the world the Marvel universe in a cinematically palatable form.

The Ultimate universe was launched in 2000 as a way to reimagine the Marvel universe and characters for a modern audience. As any reader can attest, the Ultimate universe offered unparalleled opportunity to redefine solidified canonical elements of Marvel story, such as the origins of Spider-Man.

There’s an understandable concern with the Ultimate Universe that it will read as nothing more than an echo of the originals, or that it will desecrate the beloved stories with attention-grabbing twists that miss the core of what makes a character special.

This is why I held off on the Ultimate Universe for a long time. I already know Spider-Man’s origins. And I know most of his major stories. Why would I read these again, but in a watered-down form?

The answer is simply that Brian Michael Bendis and Mark Bagley wound up delivering the most satisfying, cohesive Spider-Man saga of the decade. They took those elements we all love about Spidey, and over the course of 9 years, they carefully rearranged them into 133 issues of near perfect Peter Parker.

And then Bendis and various artists kept going.

Ok, It’s Good – Can I Read Ultimate Spider-Man All the Way Through Or What?

Longtime Marvel 616 (main Marvel universe) readers know that reading a Marvel series isn’t necessarily as simple as picking up every issue in that series. You likely have to contend with tie-in issues and crossovers to major events to understand the full context of the Marvel Universe and your selected character’s place in it.

Ultimate Spider-Man rarely suffers from this. Which ultimately, is amazing.

Honestly, you can plow through the first 133 issues of Spidey and almost never branch outside the Ultimate Spider-Man title. The primary exceptions come in the form of separate Spidey stories told under different series titles. These are outlined in bold below:

Here’s our first foray into non-Spidey titles. Ultimate Marvel Team-Up is not necessarily essential to USM continuity, but it does offer a lot of fun team-up stories. Rather than clutter the pages of USM with “This is how Spidey met Wolverine” stories, Marvel Team-Up offers a place to enhance Spidey’s place in the larger Ultimate universe. It’s fun, recommended reading.

To the best of my knowledge this Super Special (basically the first annual) doesn’t appear in Marvel Unlimited. The issue is included in the Ultimate Marvel Team-Up trade.

To my mind the most essential non-USM tie-in series. For all intents and purposes, these are Ultimate Spider-Man issues, just given a new name. This semi-inexplicable separation has probably led to more Ultimate Spider-Man related confusion than anything else. This is a must read – the Ultimate universe Sinister Six!

Does not really impact USM, but the Ultimate Gah Lak Tus trilogy occurs during these issues.

Normally, with an event, I’d simply recommend you read the event issues interspersed with the USM tie-ins as they fit. With Ultimatum the recommendation is far from simple.

A search for “Ultimatum worst comic book of all time” generates 279,000 Google results. It is legitimately hailed as “the worst of the worst” by many, and with good reason. I can’t possibly address all my thoughts on Ultimatum in this space, but I will say that the series is fascinatingly disruptive. As comics, it is historically confrontational. It is a middle finger straight up the noses of anyone who has supported the Ultimate Universe. It’s impact and what it means for comic books, is endlessly interesting.

But that’s for another day.

For now, here are the Ultimatum issues and how they should be read in conjunction with USM. Again, just like you don’t have to whip yourself with a belt, or eat hot coals, you don’t have to read Ultimatum. But if you want to, this is how you’d do it:

After Ultimatum, Ultimate Spider-Man reboots with new numbering. It’s the same series, just with a new #1 issue in the wake of Ultimatum’s devastating impact.

There’s a temptation to consider this relaunch slightly less essential than that epic #133 issue run. The shift in art direction from Bagley/Immonen to David LaFuente also takes a readjustment. Simply put, USM starts to feel more like you’re reading a comic for children.

I’d recommend sticking with the title, as it will pick up very quickly. 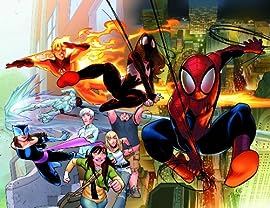 The series picks up the original numbering after the first fifteen issues so it can sell a #150th anniversary issue. Marketing markets, you know?

This marks another end for USM, this time with an event that I literally can’t even name without spoiling. You’ve probably heard about it, it’s significant, but just in case you’re dodging spoilers like a mad person, I’ll avoid naming it.

Technically, there are tie-ins to this USM event in the pages of Ultimate Comics Avengers vs. New Ultimates. I think you can get by with just the USM issues, but if you want the full experience, I’d just make sure you do the first four issues of Ultimate Avengers vs. New Ultimates before USM #158. From there, UA vs. NU #5 & #6 can be read after USM concludes with #160.

Enjoyable tie-in w/ the Peter Parker of Marvel 616. The Amazing Spider-Man, if you will.

From here, Ultimate Spider-Man is interrupted by Divided We Fall, United We Stand. This is probably the most significantly tied-into an event USM gets. You don’t have to read the Ultimates issues here, but they do actually explain quite a bit of what’s going on in the world of Ultimate Spider-Man. There are Ultimate X-Men tie-ins that fit in here as well, but for the purposes of a USM reading order, I’d stick to spidey and the Ultimates. Fortunately all issues are collected in one trade here.

The 16.1 issue is clearly out of order, but it actually makes more sense as a Venom Wars prelude than it does in the middle of Divided We Fall, United We Stand.

After Ultimate Comics Spider-Man #28 and Cataclsym, the Spider-Man title relaunches with a new title as:

At the same time as these new Miles Morales issues, you can also see more of Miles in:

And finally, from there… we enter:

Have a question of your own? Want to talk Ultimate Spidey? Do what feels right to you in the comments.

You can see the interplay between the even using Comic Book Herald’s Civil War 2 reading order.