Described by writer Christopher Priest as, “a morality play in five acts” U.S.Agent: American Zealot, follows the adventures of John Walker, the titular U.S.Agent after he’s been booted from the role and demoted to government contractor status. Deployed as a joke, Walker is tasked with securing a top-secret facility hidden beneath a destitute former coal town.

What should be a routine ‘bag and secure’ mission, quickly spirals out of control as Walker is confronted with his estranged younger sister, Kate – lost in the witness protection system after the murder of their parents – now a goverment agent, and April Manning, a billionaire who has used his wealth to purchase himself access to real power: a new iteration of the super-soldier serum and with it, the ability to reshape America into his perfect vision of the country.

The series is framed using the device of residents of Ephraim, West Virginia, being interviewed about the aftermath of John Walker’s visit to the town. Ephraim is a town devastated by the closure of its coal mine. A glimmer of hope arises in the building of a Virago Distribution center (our tale’s Amazon stand-in) – but the conglomerate flies in its workforce and builds its own private power plant. None of the wealth it generates flows back into the community.

Some residents take matters into their own hands and blow up the distribution center’s power plant, unaware of its top secret status. They’re overjoyed when Walker arrives – he’s dressed in the flag, he’s got the shield, he’s Captain America. And they sincerely think he’s going to help them take the fight to the man. 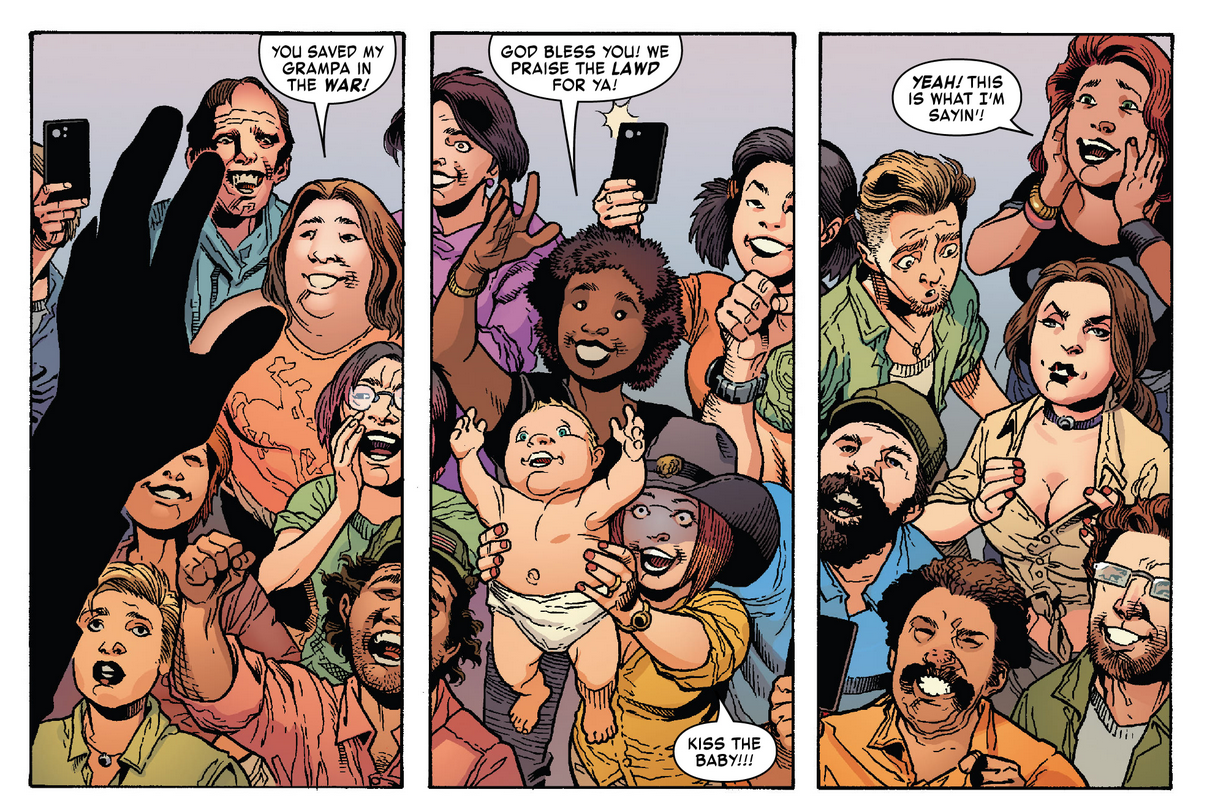 Why would they expect him to make their lives exponentially worse before he leaves town?

Walker learns that not only is the hated warehouse a secret installation belonging to a now defunct S.H.I.E.L.D., but that his estranged sister is a part of the team guarding it. He hasn’t seen her in years, not since she went into witness protection with his parents (later murdered) after villains threatened them because of Walker’s work with the government. As he was inspired by their older brother to go into military service, she was inspired by him to go into government service with the goal of one day replacing him. We soon learn she’s connected to another figure looming over the plot: April Manning.

Manning is an African-American billionaire with a chip on his shoulders. He’s a firm believer in bootstrap and respectability politics and that African Americans oppress themselves with their own demeanor and culture. We get snips and pieces of Manning’s background throughout the mini-series: that he’s long used his wealth to make connections within the government, like being golf buddies with Nick Fury. Manning not only purchases and privatizes the U.S.Agent role from the government, he takes ownership of the former S.H.I.E.L.D. facility in Ephraim and harnesses the secrets buried beneath it. Manning re-christens himself The Saint, transforming from a scrawny nerd into a mustachioed action hero with a mysterious, but temporary, new super-soldier formula he takes in the form of injections.

When Walker discovers that his sister and Manning are in cahoots – both driven to “super psychosis” by their use of his injections – the mini moves into a series of wild set pieces involving aerial battles, bare knuckle combat and the appearance of a Kaiju.

What’s fascinating about this story is that, in true morality play fashion, Priest isn’t subtle about what he’s trying to do here. The characters are all incredible exaggerations of figures which haunt the landscape of American popular democracy.

April Manning is Bezosian figure, equal parts black conservative and the ubermensch. Not content to merely preach from a soapbox about the need for black men to pull up their pants, we see that Manning undergoes secret, deadly combat training which allows him to “take the fight to the streets” and hike up the pants of those who dare hold back the black race. And this *before* he transforms himself into a super soldier. 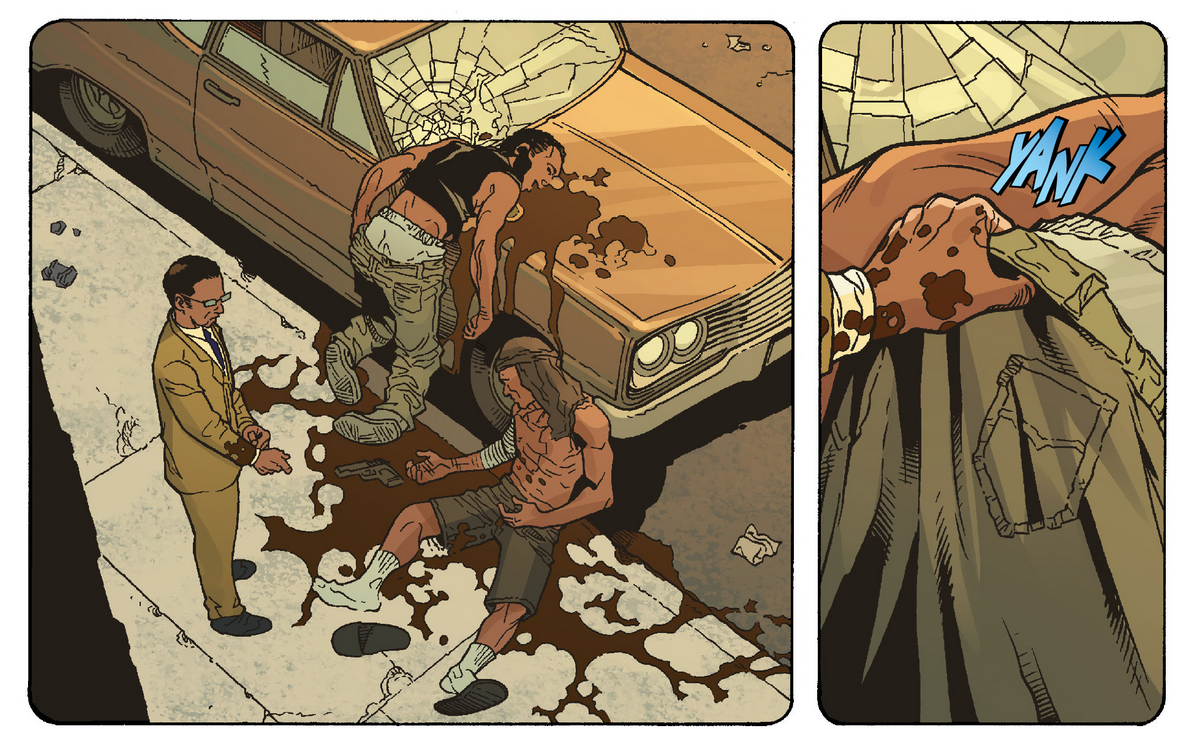 John Walker is everything that we should roll our eyes at. He’s a god fearing, beer drinking, pie eating, red blooded American who loves his country and isn’t afraid to “tell it like it is” – which in this story takes the form of some casual anti-Asian racism. But unlike any manifestation of this set of tropes in our political landscape, Priest makes sure to play Walker as someone with legitimate principles. We find out he’s been demoted out of government service proper for refusing to use force on a group of unarmed protestors. In fact, he even turns his shield on the military’s anti crowd weapon when the situation is escalated by trigger happy soldiers.

Kate Walker, John’s sister, stands in for the liberal set, dyed hair and all. She is animated by a hatred for backwards middle Americans and a shaky anti-government position. She claims to want to defend the “idea of America” because it is “under attack” (where have we heard that one before?) but her entire plan seems to be shacking up with a billionaire, empowering herself and murdering people. Again, not an entirely unfamiliar tale in the American political landscape. I can think of a few sitting politicians who get that criticism lobbed at them every day.

All three of these characters have been chewed up and spit out by the American experiment – the Walkers by the government, Manning by his ideas of exceptionalism and the insulation created by his enormous wealth.

The conflict between these figures feels like a battle between three competing versions of America. Manning’s is the easiest position to parse: hard work, no excuses. Kate is animated by a sense that America is being held hostage by government corruption that rewards backwoods mediocrities, of which she includes her brother, and wishes to replace him. Walker on the other hand has no complaints. He loves his country even if it asked him to bring the jackboots down on unarmed protestors and punished him harshly when he refused to do so. 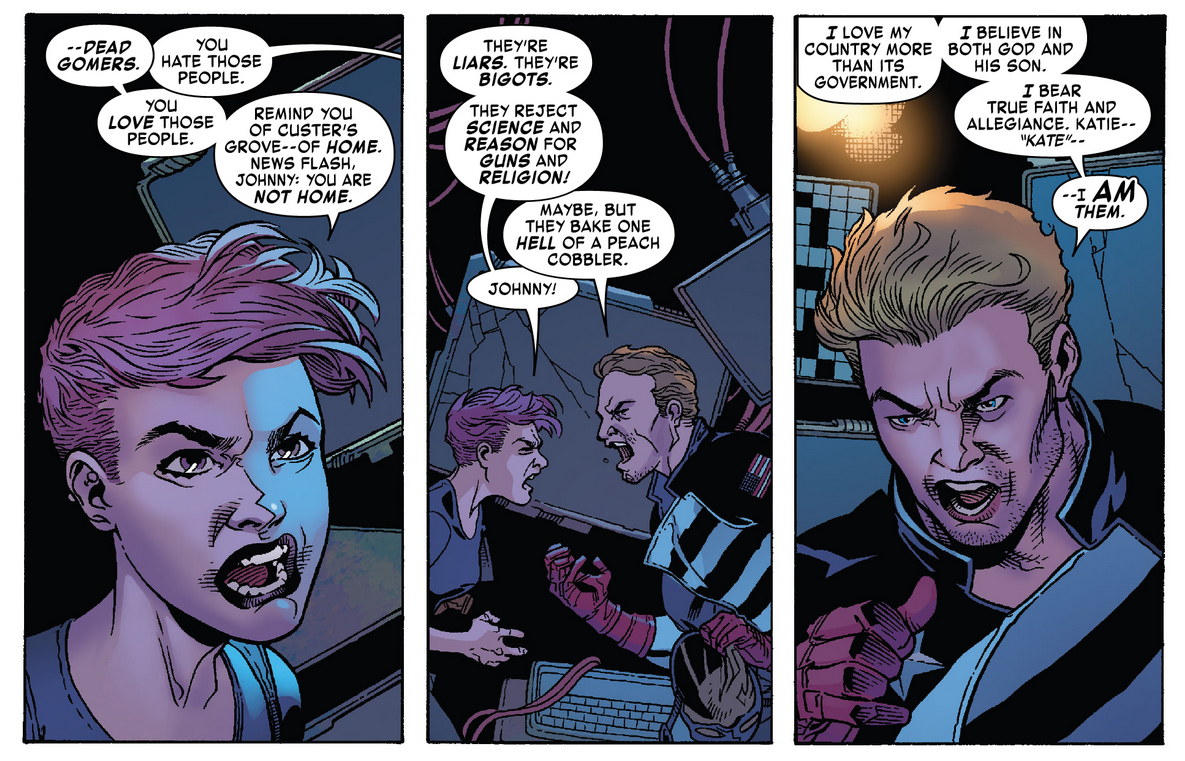 There are some standout moments as things come to a head, most notably The Saint’s fight with Battlestar, who seemingly only shows up in the story to get accused of shuckin & jivin’ while Manning beats him to a pulp. And there is a heart-wrenching sequence revealing the death of Manning’s son at the hands of the police – for which he blames himself for allowing his son to drive a nice car, absolving the officers of their role. While April’s point of view is never truly repudiated by the story, his character is a study in how echo chambers allow us to reinforce the worst parts of ourselves.

Meanwhile John Walker, who dusts himself off as the hero of the day, ends up as nothing more than a pariah and laughing stock to the people of Ephraim. They thought a man draped in the flag would be their salvation instead of a harbinger of destruction to their already ravaged community. Not really sure you can be any more heavy handed than that (and I say that in the best way possible).

The entire story is exquisitely illustrated by veteran artist, Georges Jeanty. His characters are gorgeously rendered: every character on the page looks like someone who could actually exist and his repertoire of facial expressions is top notch. The aesthetic of this book reminds me a lot of art styles that dominated Marvel books in the early aughts when I became a reader, but with a modern edge and a cinematic sensibility. It’s equal parts Mark Bagley and Bryan Hitch. Colorist Matt Milla’s work here is exceptional, with his use of palettes to shift us between locations and times, particularly standing out.

While I can’t say U.S.Agent is a character I’ve ever truly been interested in, I couldn’t pass up a chance to see what Priest would do with him. As a longtime fan, I’ve been watching his current resurgence with interest. It was a surprise when he took the reins of Deathstroke

and somehow his Justice League

blurred right by me. I wouldn’t have expected him to return to the Captain America sandbox but I’m glad he did.

is a story that asks you to think about what kind of country America is – and what kinds of people this country is capable of producing – wrapped up in a slick John Woo balls to the wall action movie package. This story is definitely not going to be everyone’s cup of tea, but I think it’s a must-read for anyone looking for something a little bit off-beaten path.