You are here: Home / Featured / THE WEAPON X PROGRAM #1 : “Question” Direct tie-in to Death of Wolverine

The “Death of Wolverine” train is still chugging along, pumping out various one shots and issues in comics that tie into Wolverine. (Check out my reviews of Logan Legacy, and various other tie ins!) This is the first book of a five issue series, and picks up directly from the events at the end of “Death of Wolverine”. 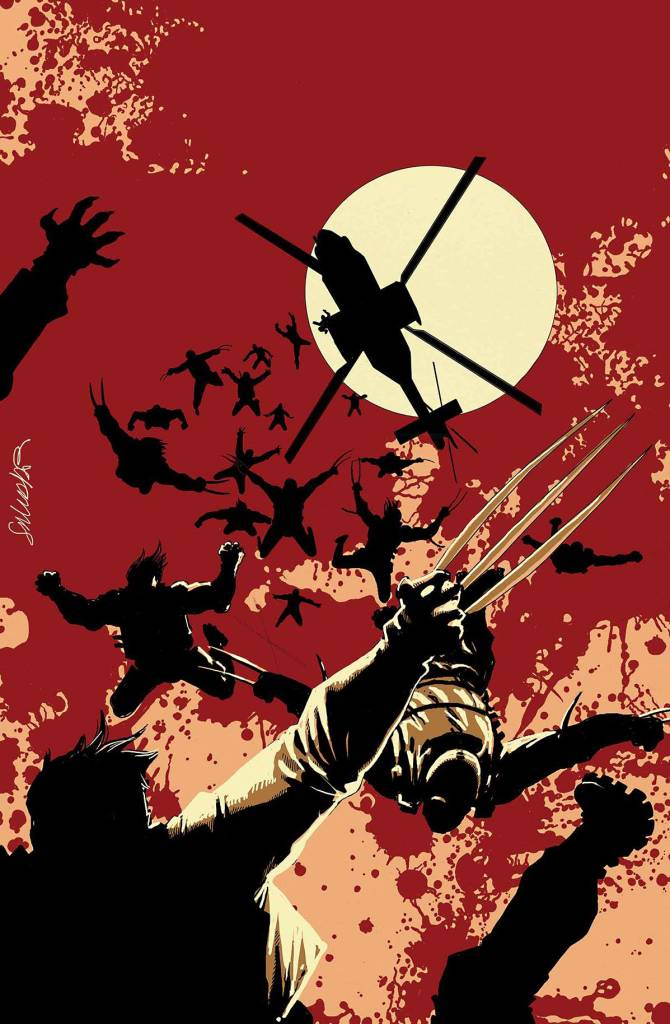 Charles Soule, the ringleader of the four part mini series that killed off Logan returns to pen this tale, and fittingly so because it opens up mere minutes after the final panel of Death of Wolverine #4. Salvador Larroca helms the artistic duties, with his usual grace and proper command of shadow and light, which he has shown on titles like “Invincible Iron Man” and the highly anticipated “Star Wars: Darth Vader”. For those who are not caught up, before Wolverine died, he faced a super soldier named Sharp, that Doctor Cornelius said was his “proof of concept”. He put every augment and enhancement into him that he could think of, and in his head, he is always fighting. Wolverine got the better of Sharp though, dispatching him and knocking him out. But then Wolverine got a hot adamantium bath, and the rest is (recent) history.

This issue starts with Sharp coming to, in the wake of the destruction left by Wolverine. Soule does a great job picking up the action, as Sharp and the rest of the people being experimented on at the facility start to find each other. Sharp keeps getting war flashbacks, and is extremely effective in saving some of the others from the men with guns trying to wipe the facility clean of witnesses. His senses and reflexes are clearly higher than normal humans, and even though he was beaten by Wolverine, he put up a good fight.

As we start to meet the other survivors of the facility, some are disfigured, and some are already showing enhancements or powers. There is virtually no knowledge of any of these people, yet, as this five part series will most likely introduce us to them, and hopefully some or most will make their way into the Marvel universe. Some of the powers they possess are talked about, like one who can spit an acid like substance on enemies, another can run really fast, like Quicksilver. As cool as it was to see the action unfold hanging on the back of the Death of Wolverine, this issue also poses a lot more questions, including the final panel reveal, which I won’t spoil here, but was very interesting and will give many different outcomes depending on what transpires in the next issues.

The final bit of action, when Sharp and the rest of the survivors get out and get on the helicopter, is done well, but the background shots are what really stick out. There on the helipad, is Wolverine’s body, encased in adamantium. It isn’t the front of any panel, only the background, but it is still heart wrenching to see. Especially as the group flees the facility as it explodes, and the fate Wolverine’s body is plunged into uncertainty.

The reveal at the end is a doozy, or at least could be, but the reveal that there are multiple survivors at this place, all that have been worked on by Cornelius, is crazy. There is a ton of potential for these characters, especially if some of them turn out to be mutants already. Also, the art is really great in this book, giving each of the new characters a lot of life to their designs.

Are any of the survivors one or all of the three that Wolverine shot with the artificial healing factor vials as he was dying? What will happen to Wolverine’s body now? Will we get answers to these questions soon, or will the mind of Charles Soule lead us on for years to come? So. Many. Questions!

CBH Score: 3 out of 5 stars. Lets see where this story is going.