.
You are here: Home / Featured / The Other History of the DC Universe Review!

is an interesting little project. Part social history, part love letter, part fanfiction – and I don’t mean that derisively. One of the strongest (and depending on who you ask, most problematic) aspects of fan fiction as a medium is the tendency to obsess over the moments where canonical works might cut away. Sometimes this tendency can produce some eye-rolling moments, but the same all encompassing love that inspires someone to write about what Sulu was doing while Kirk and Spock were down on Talos IV, is dripping from every issue of this series. If you pick up nothing else from reading this series it’s that John Ridley absolutely loves DC Comics.

TOH is incredibly text heavy. Narration boxes, blurbs, and paragraphs of text cover pages of full, often panel-less art. At first glance, it is more reminiscent of a picture book than it is most comics DC publishes, but the format absolutely works with the story that’s being told. Every page or spread is its own self contained flashback to a moment in time

Art duties on the series are handled as follows: Giuseppe Camuncoli (layouts), Andrea Cucchi (finishes), Jose Villarrubia (Color) & Steve Wands (letters.) The layout/finishes/color work on the book gives it a look that is very unique, like a mix of George Perez’s iconography and Denys Cowan’s gritty linework.

I’ve always been one to scoff at higher price point “premium” comics, but I think I am finally convinced by these Black Label books. They are attractive little magazines and they feel good to splay open while sitting back with a cup of coffee and some midday sunshine. This artwork is especially well served by the widescreen sizing of these books. I’m not sure how the hardcover looks, but I’m absolutely going to be that guy who suggests you go and track down these floppy issues. There’s something incredibly satisfying about the way they look splayed out together, especially with these Giuseppe Camuncoli and Marco Mastrazzo covers.

Each issue of the mini focuses on a different perspective – Black Lightning, Bumblebee & Herald, Katana, The Question (Renee Montoya), & Thunder serve as our point of view characters – and aims to dive deep into their perception of events in the DC Universe during a specific chunk of time. Black Lightning’s story covers 1972-1995, Bumblebee & Herald’s is 1970-89, Katana’s is 83-96, The Question is 92-07, and Thunder takes us from 1981 – 2010.

The mini series attempting to adhere to “real time” was an immediate draw for me. I was a huge fan of Zdarsky & Bagley’s Spider-Man: Life Story

and spent months eagerly consuming news of DC’s planned but abandoned 5G initiative. I’m not one of those fans who needs “realism” to enjoy his comics, quite the opposite (as we’ll get into later). But I think big sandboxes are fun to play in. DC’s entire continuity from WW2 to the present day is a pretty big sandbox and there’s a lot of great stuff to explore there. But there are problems. Like Zoe Tunnell said in her review of X-Men Grand Design: When this concept works, it works well, and when it doesn’t the results are messy.

In the first and second issue, for example, we get to see Black Lightning and Bumblebee react to Superman unveiling Supergirl to the world. Jefferson thinks it’s great Superman finally isn’t alone anymore, while Karen remarks how strange it is that he apparently kept her a secret until he decided it was the best time to unveil her. 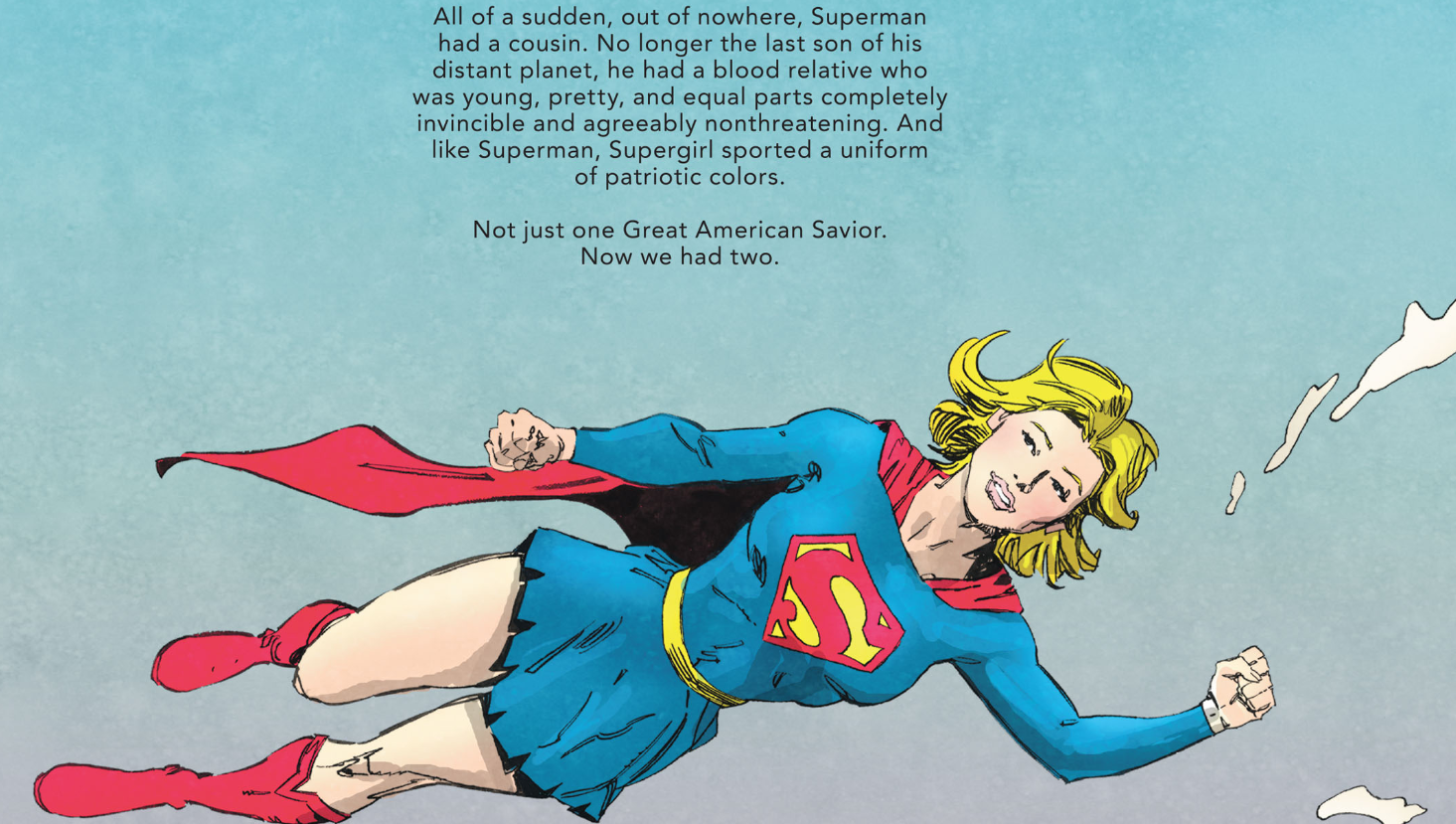 And the book does embrace being an “alternative” history of the DC Universe. The second issue has Mal Duncan essentially interpreting the editorial drama over Teen Titans #20 through a “real world” lens. Ridley reframes DC editorial scraping the story due to including a black hero to Mal discovering old Titans case files and seeing that the “powers that be” had Jericho eliminated due to his pacifist ideology. It’s a really effective way to bring a piece of comics lore into conversation with the rest of canon.

But when our super-history runs up against the real world, there is friction. There’s an instance in the second issue where Bumblebee discusses the Atlanta child murders and her hope that some superhero would’ve intervened (while beating herself up for not doing the same.) It follows a mention of the Iranian Hostage crisis in the first issue and the Justice League gracefully declaring they can’t get involved in politics. There is something jarring about these instances being framed as superheroes choosing not to act rather than being prevented from acting (Ex: the Superman/JFK situation from the recent Superman & The Authority #1).

Part of it is that the story we’re consuming is already an alternate history – it is set in a world where the multiverse collapsed in on itself, America disowned a city damaged by a natural disaster and Lex Luthor was elected President. I know it might be weird to say “I would be okay with 9/11 having not happened in this world,” but it feels weirder to accept that planets can fall from the sky and aliens can invade but 9/11 still has the same impact in this world as it does ours. That’s not an extrapolation, the Patriot Act is an actual plot point in the fourth issue.

For this world and these characters to be impacted by something they aren’t able to grapple with kind of rains on the whole experience of this series. It is one thing to watch their personal issues, like the deterioration of Black Lightning’s marriage, Mal Duncan’s self-esteem issues, or Katana’s grief; we can all empathize with these experiences in one way or another. But when the cards are just as stacked against them as they are us in the real world? That’s some bitter medicine.

Another blow against this mini is that there is no real throughline between each issue. There are brief moments when the narratives overlap, like Black Lightning & Katana sharing a tenure on The Outsiders, but the only two issues really in conversation with each other are the first and last: the Black Lightning & Thunder issues. Together, these bookends give us a fairly compelling father/daughter tale of heroism in the face of self-doubt and social prejudice. And for as good as that it is it kind of renders the content in the middle a bit moot. The Bumblebee & Herald issue at least gets a bit of a pass because the dual-perspectives within the issue give it a natural flow, but the Katana and Question issues, 3 & 4 respectively, feel a bit adrift.

While there’s some stuff in the Katana story that stands out, like stripping the supernatural from her origin, it doesn’t really feel like we get much of a different perspective on this character than say, the one anyone who watched her on Arrow might have walked away with. The Question issue mostly just reads like someone transformed her Wikipedia page into a series of monologues to summarize Batman crossovers. In an “Oral History of Gotham City” series, I think this would be most people’s least favorite issue. It’s not poorly written and it’s certainly not uninteresting, but it doesn’t feel dynamic.

That’s not to say a lack of connectivity is the only other problem that plagues this series. The final two issues, in particular, feel a lot more like running down the important stuff from a character’s wikipedia page than the heavy character work that happens in the front half of the mini. I chalked this up to their POV characters, Renee Monotya and Thunder, being much newer characters than the rest…but Monotoya has been around for 29 years, and Thunder 18 years. Perhaps this is a wakeup call that these characters might have a bit more utility than getting dusted off whenever DC needs to highlight the diversity of its intellectual properties.

It isn’t easy for me to cap off this review with a recommendation to rush out and buy this series. As much as I enjoyed it, I’m not sure there is really something here for everyone. If you consider yourself a fan of any of the individual characters featured, absolutely track down their issue. If you’re a big DC continuity fan or someone who is craving more prose heavy comics work, definitely get your hands on this. If you’re a more casual DC fan I might advise you to shy away from it depending on your overall familiarity with DC continuity.

And it didn’t hit me until I finished the series that it literally wraps up its story in 2010. DC introduced the New 52 initiative in 2011. The interpretation of canon present in this story, even without its “real world” timeline, has very little resemblance to most comics DC published between 2011 and March 2021. Don’t let that stop you if you’re really interested, but I would definitely advise you to *not* purchase this as a gift for someone unless you absolutely know they’ll like it.