You are here: Home / Featured / The Complete Ultimates by Al Ewing Review! 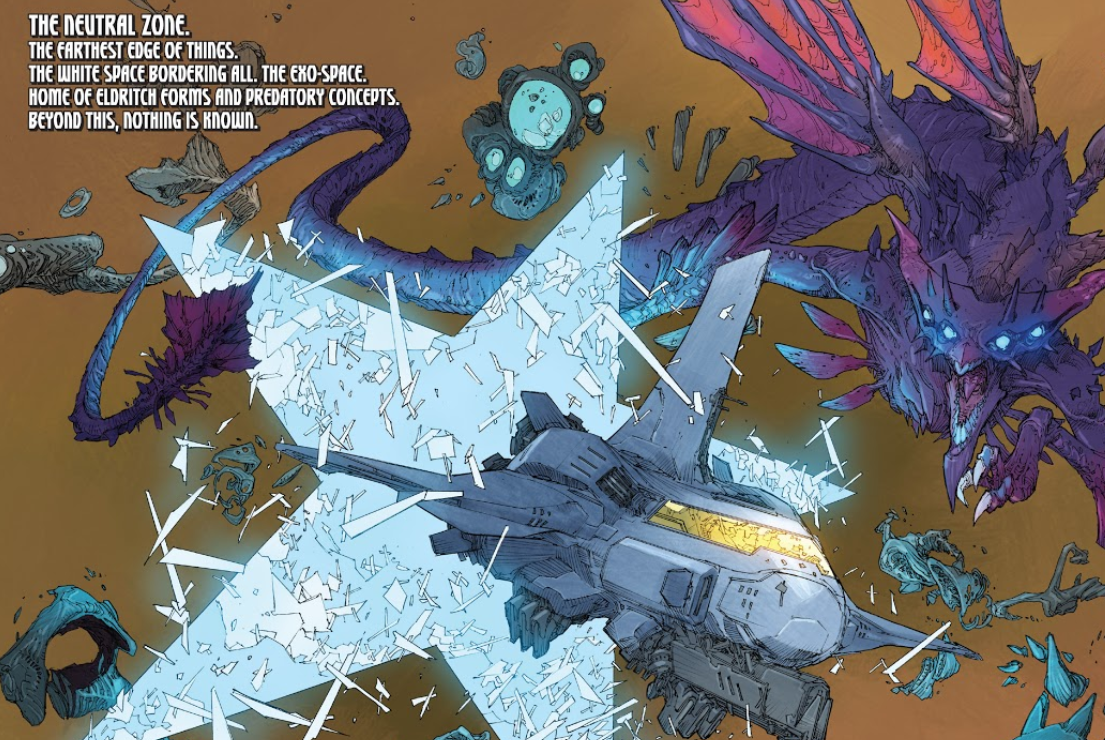 In 2015, everything changed. Everything died. Everything lived. A brand new universe with no expectations and a wide open playing field for worldbuilding. First and foremost, The Ultimates is unabashedly weird and unabashedly ordered. This dichotomy of order and chaos, high concept and structure allows the book to tackle heady subject matter while keeping the reader grounded with consistent rules. It takes this sense of high concept and presents it straight, making every moment of strangeness feel natural and ordered, anchored in the logical. The natural way with which the story is presented, the cosmic geography that is built within the reader’s mind, and every storytelling decision each help to ground the fantastical and facilitate further story developments. On every level, the book excels at this restructuring of expectations, this transformative mindset that guides every character and worldbuilding decision. However, I think limiting The Ultimates as merely an inventive science fiction setting undercuts the true core and essence of the team’s struggle.

That’s right, it’s about Trauma. The true magic of the Ultimates as a team, in my eyes, is their ability to (whether consciously or not) find each other in moments of weakness and create real, human bonds to strengthen each other. This does tend to get lost in the vastness of the ideas on display in The Ultimates: the spectacle of Lifebringer, the grand mystery of how Eternity was jailed, the chaos of the Superflow power vacuum. However, the balance created by the pure humanity of these interpersonal moments between the Ultimates themselves is uniquely special in an already fascinating book.

So let’s start with the impossible; let’s meet our cast of characters at their foundations, stripped down to their barest selves, and confront the unimaginable right along with them. Notably, The Ultimates is a piece of a larger ongoing Avengers story by Al Ewing featuring a few key characters and their development over a few years of Marvel publishing. None of this is necessary to read and enjoy the book, but it does provide some context, specifically for Blue Marvel and Monica Rambeau.

A climax of sorts for this years-long run, The Ultimates sees the Blue Marvel struggling with the death of his family and his responsibility not only in their demise, but as a universal beacon of power as well. As early as Mighty Avengers, the good doctor is seen grappling with the ideas of such power and responsibility, confronted with the notion that he has failed himself and the greater world by not taking a stronger stand. In The Ultimates, we see these feelings evolve as he directly confronts large scale threats to reality in a way that he feels befits his abilities, but also as he is confronted by the very man he blames for his family’s death, a friend he himself has failed. This direct confrontation of his largest trauma, the crystallization of both external forces and his own internal battles rolled into one Conner Sims-sized package, is the climax of Blue Marvel’s journey thus far. In his constant quest to push further into the unknown for all of humanity, he must first overcome his own demons that tie him to a generational pain of his own creation.

In a similar vein, The Ultimates meets Monica Rambeau, Spectrum, at a profound loss of control. Her ordeal with Beyond Corp in Nextwave (and the recent reopening of those wounds in Ewing’s Captain America and the Mighty Avengers) have left Monica in a constant everyday battle to keep her life in her own hands. Paired with (and exacerbated by) her quantum light powers slowly wresting control of her very physical form away from her, she comes into The Ultimates at a point in her life where every day and every decision is part of a larger overall personal battle. I’d love to say that the unfolding events help her in this regard. As a reader, I’d like nothing more than for Monica to find stability in the wider universe. Instead, the wider ramifications of the reality-wide forces the Ultimates face are perhaps emblematic of this constant fight. It would be nice, indeed cathartic, to see those personal demons bested, but it is Monica’s resolve to move forward day after day that exemplifies the passion and altruism of the Ultimates in the face of catastrophic danger.

This larger narrative and its motifs of collectivism and how heroes fit into the larger Marvel world are directly mirrored in the way the Ultimates confront their demons and overcome lifelong trauma and self-destructive behavior. The core drive of the Ultimates program is a quest for understanding, and it is interestingly this quest for understanding that brings our heroes face to face with their issues. As they physically ascend the hierarchical structure of the universe and gain a higher level of perspective, each team member similarly gains perspective on their own lives and how these issues manifest. The escalation of perception throughout the story directly correlates with more direct confrontation with their trauma, leaving lasting effects on the characters and pushing them to analyze their lives.

Additionally, the team demonstrates uniquely human tendencies in their interactions, which are only magnified by the contrast with the more esoteric setting of their universal adventures. The members of the Ultimates are far from perfect. They are flawed, biased, human. While they often transcend spacetime itself in pursuit of higher understanding, the most dangerous situations for the team are caused by their own arrogance, their own values and personality clashes. The team is close knit, but each member silently vies for dominance in the power struggle of the century. However, it is this dynamic that highlights the bonds that they share and rely on for support. While America and Carol may fight (and oh do they FIGHT), they’re also each the first that the other leans on for support. It’s true, it’s honest, it’s human. It just happens to take place in the Neutral Zone where reality unwinds and a sideways glance from a local can kill you.

On a more subjective note (this is a review after all), The Ultimates is a fantastic read, easily one of the best books Marvel has put out in the past several years. Al Ewing has a knack for character writing that always feels fresh, always has something to say about the character. While the book does cross over with a couple events, namely Civil War II and Secret Empire, the tie ins are handled deftly, always adding something of value. I would go so far as to say the Civil War II tie ins are among the best issues of the event, analyzing Carol Danvers’ character and painting her conflict in a way that, while perhaps not quite sympathetic, allows for reflection on her actions. As a whole, the pacing of the overall story of The Ultimates is well done, and the stakes tend to feel real, which is an accomplishment considering how ephemeral the story can become at times. This is perhaps the biggest flaw in the work, as (especially in the back half of the series) conflicts become more and more esoteric, metaphorical, and hard to follow. The Eternity War storyline in particular feels hard to grasp in this regard, by virtue of its very design. I find it easy to accept most of the constituent ideas, that of cosmic forces warring on a cosmic level, but at its climax the story begins to feel particularly muddy, with a few too many moving pieces between all the factions warring for control over Eternity. The juxtaposition of these cosmic battles (ideas made manifest in a higher level of thought to do physical battle) and the physical pieces of reality falling down around each other makes for a fascinating climax to a series that has already set a standard for confronting the impossible, but it makes for a difficult reading experience. Indeed, I have personally found that the story works better as you reread it more, but it is of course unreasonable to ask a new reader to hold on until the third read to really understand what is going on. As a whole, I find the book incredibly well crafted, but a few comprehension issues do present themselves at times and this is something that should be weighed.

Interestingly enough, The Ultimates is the first book that made me fully appreciate Kenneth Rocafort’s art. Something about his hyper detail just works here on a level that I can’t quite place, but his design work and style lend a believability to the environments the book works with and I absolutely adore the sense of scale he lends. That said, the art in The Ultimates is incredibly inconsistent. None of the artists working on the book are particularly bad (aside from my personal distaste for Travel Foreman’s linework,) but the series is packed with fill-in artists, sometimes even on a page-by-page basis. These fill-ins are often enjoyable, with Christian Ward and Aud Koch being notable examples, but at times it does ruin the flow of the reading experience. 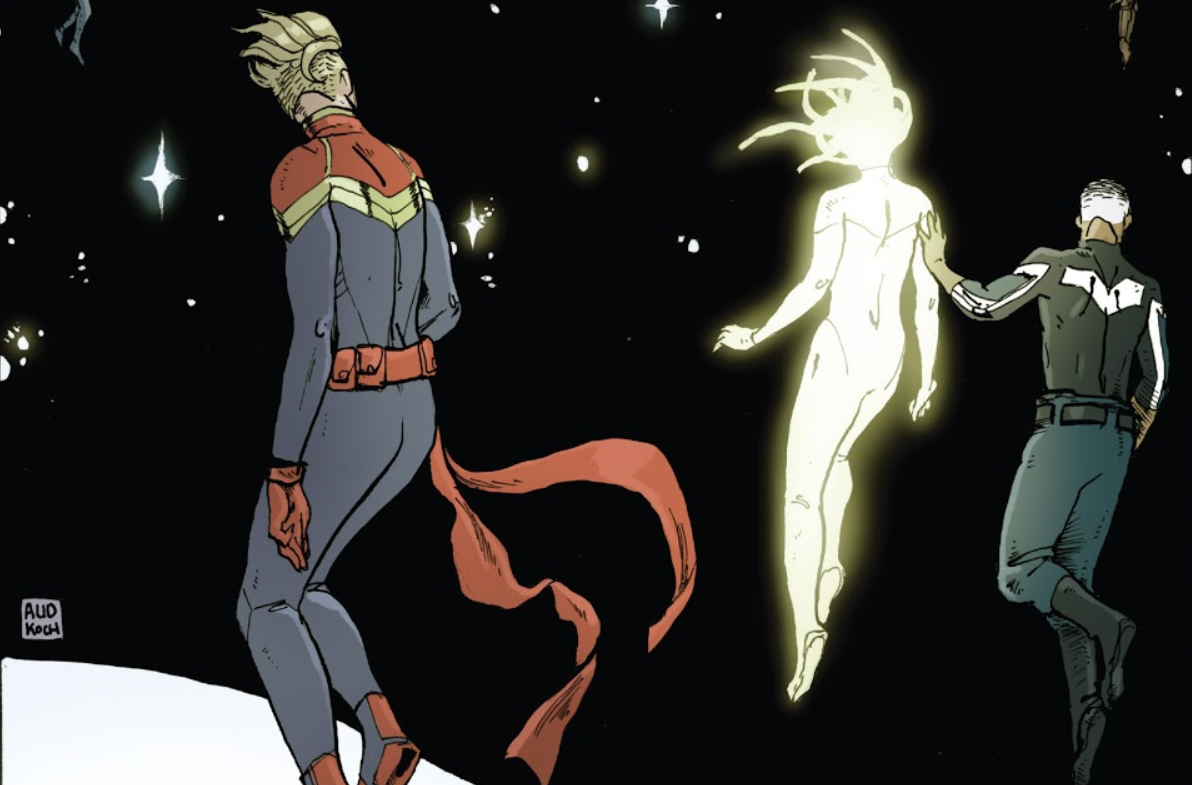 The Ultimates is an incredibly special book. I have read it a few times myself, but it seems like every time I return to it I pick up on some new facet, some nuance I have never noticed before. Standing on its own it is obviously a fantastically fun story, filled with crazy sci-fi romps, high concept discussions of existentialism and humanity’s place in the wider universe, and genuine heart. These ideas are truly fascinating, melding together so that you never quite see the story the same way twice. It stands atop Marvel’s recent output by leaps and bounds, and it is well worth a read or four.